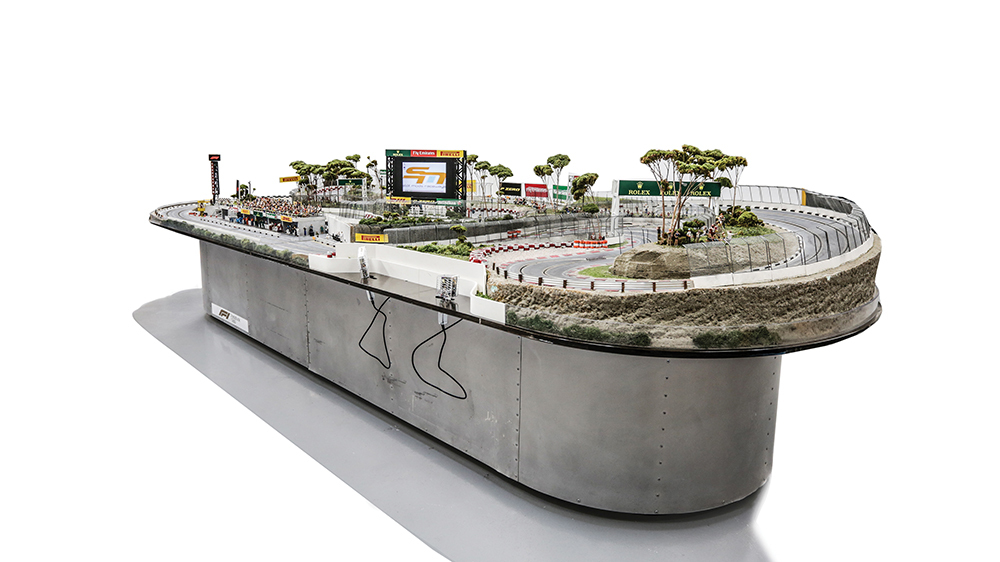 The custom-made track will be auctioned off in Abu Dhabi later this month.

With the holidays around the corner, it’s time to start thinking about gifts for the people in your life. And if one of your loved ones is a racing fan, one particular lot at RM Sotheby’s upcoming Abu Dhabi sale might be of particular interest—the incredibly detailed, 1:32 scale Formula 1 toy slot-car track.

The handmade track will go up for sale as part of the first major international collector car auction to be held in the Middle East. A collaboration between RM Sotheby’s and the Formula One Group, the November 29 evening sale will be held the same weekend as the season-ending Formula 1 Etihad Airways Abu Dhabi Grand Prix 2019 at the Yas Marina Circuit.

Built by Slot Mods Raceways in Detroit, the track is one of 21 originally commissioned by Formula 1 before the 2018 season. That year, custom-made wooden tracks were sent to each Formula 1 Grand Prix, where they were used by patrons of the Formula 1 Paddock Club. Each track was designed for two cars, which can be raced against each other at the same time, and is equipped with a working electronic lap-timer and cameras to heighten the realism.

This specific track was lovingly hand-crafted and features scale reproduction of everything you’d expect to see at a Formula 1 race. This includes hand-painted spectators and race crew members, accurate advertisement hoardings, realistic buildings and foliage lining the circuit. It can also be broken down into two modular sections for shipping or storage—though chances are anyone who wins the auction will actually want to play with the track.

Slot Mods Raceways is actually well known for its bespoke slot car tracks. Each track is a labour of love that takes anywhere from three to six months to complete and can cost upwards of $140,000 depending on how lifelike you want it to look. In 2014, Neiman Marcus included one of their tracks in its Christmas Book for $440,000. That retro-inspired track had room for three cars, not just two.

This Formula 1 track is expected to sell for between $29,000 and $44,000 when it hits the block on the last Saturday of the month. Not only will the winning bidder get their hands on the slot car track of their dreams, but all proceeds from the sale will go to benefit the Reaching the Last Mile Fund, a charity dedicated to eradicating preventable diseases worldwide.