The Hummer Returns As An All-Electric Super Ute

A fully-loaded, three-motor version of the beast has been unveiled.

It took a little bit longer than expected, but the Hummer is finally back. And based on our first real look at the eagerly anticipated super ute, things are going to be a whole lot different this time around.

On Tuesday night, after months of teasing and a Covid-19-related delay, GMC finally unveiled the reborn Hummer in a pulsating commercial aired during game one of the World Series. But while the hulking utility vehicle bears a striking visual resemblance to its predecessor, that’s where the similarities end. The first Hummer and its follow-up, the H2, came to represent gas-guzzling decadence. The new version is an all-electric, battery-powered bruiser that sounds like it can do it all.

“The all-new GMC Hummer EV will be the first of its breed—an open-air, all-electric super ute with zero emissions and zero limits,” vehicle’s chief engineer, Al Oppenheiser, said in a statement. “It will have the capability to go almost anywhere, on- or off-road, combining screaming performance with a nearly silent ride.”

Since it was first announced, GMC had made clear that the new Hummer’s electric powertrain would not come at the expense of power. And based on what we know about the 2022 Hummer EV Edition 1, it sure sounds like the automaker has stuck to its promise. The EV will feature a three-motor—one on the front axle, two on the rear—powertrain capable of producing a stunning 745kW and an even more impressive 15,590Nm of torque, signalling that it will be able to rival the Tesla Cybertruck and the Rivian R1T from the get-go. And the Hummer will be quick, too, able to rocket from zero to 100km/h in just three seconds.

Of course, when it comes to EVs, horsepower and acceleration time aren’t the only important figures. Range is arguably even more important. GMC estimates that the new Hummer will be able to go 560km on a single charge of its Ultium battery. While that’s nowhere near the promised 800km range of the Cybertruck, it will almost certainly make the vehicle one of the longest-range EVs on the road when it finally goes on sale. Plus, 800-volt DC fast charging will allow you to add 160km of range in just 10 minutes. But it should be noted that we don’t know how towing a particularly heavy payload will affect that figure. And, on that score, as of writing it’s unclear how much the ute will be able to tow. 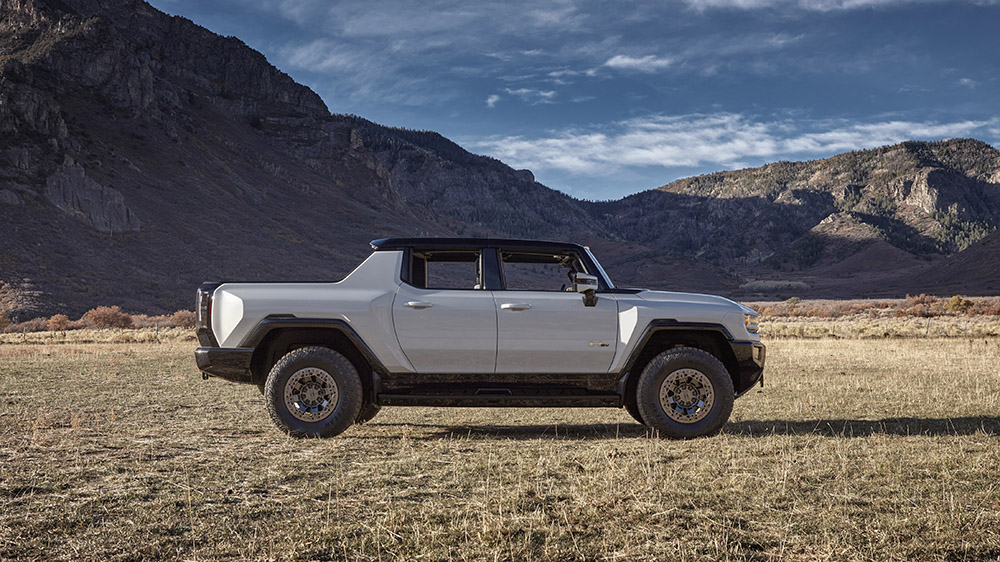 Crab Mode and Other Cutting-Edge Features

Of course, will be a lot more to the Hummer EV than beefy power and lightning-quick acceleration. The pickup will be loaded with a number of high-tech features and options that will increase its utility and off-roading abilities. These include the much ballyhooed Crab Mode, which will allow it to drive diagonally and perform perfect-circle tank turns, like the R1T. There will also be a first-of-its-kind Extract Mode, which will raise the ute six inches so you can surmount unexpected obstacles like boulders or bodies of water. The latter mode won’t be available initially, but will arrive as a software update by 2023. The vehicle’s water-proof underbody will also be equipped with the new 18-camera UltraVision system so you know exactly what you’re driving over at all times.

Like so many other of General Motor’s top-tier vehicles, the new Hummer will come equipped with the company’s Super Cruise driver assistance tech. As the debut video shows, this will allow for hands-free driving as well as automatic lane changing on more than 320,000 kilometres of road throughout the US. 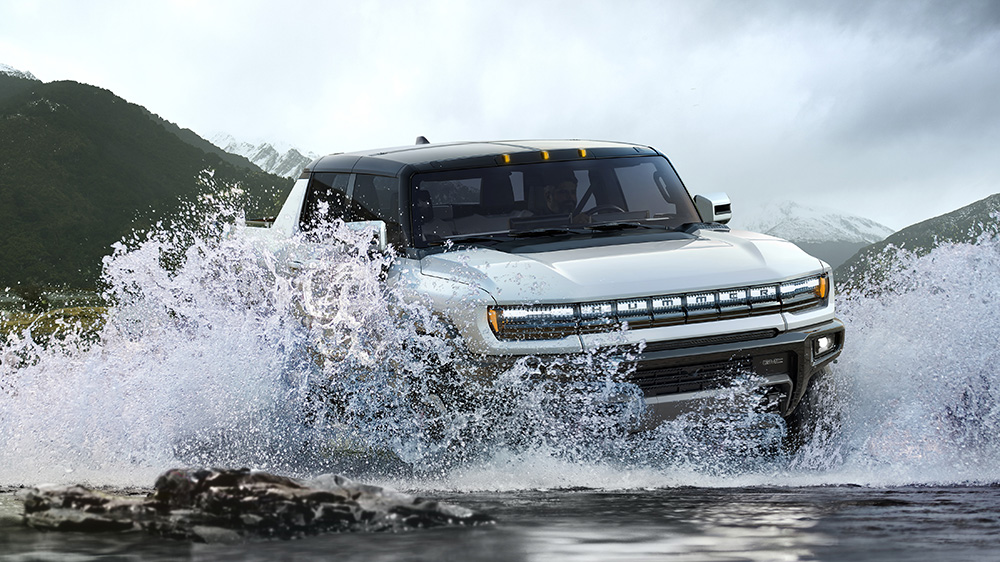 Although GMC has been teasing the new Hummer’s headlights and light-up grille, as well its silhouette, for months, Tuesday’s video offered the first comprehensive look at the EV. It’s not as unorthodox as the Cybertruck, but it also doesn’t look like any other ute on the road right now. The automaker’s designers have combined the first militarised Hummer with the more conventional H2, resulting in a sleek-yet-burly convertible ute that will look imposing on- or off-road thanks to huge 35-inch- Goodyear Wrangler All Territory tyres.

While the new Hummer’s roots can be seen in its exterior, its interior is another story. Inside the roomy cabin, the EV looks much more like a luxury Cadillac than a workhorse GMC ute. The dashboard is basically covered in screens, including a 12.3-inch digital gauge cluster and a 13.4-inch touchscreen infotainment system, both of which are powered by Epic Games’ Unreal 3-D engine. Meanwhile, premium sound is delivered via a 14-speaker Bose audio system. The finishing touch and the design’s pièce de résistance is the Infinity Roof, which will make you feel like you’re driving with the top down even if the fully transparent roof panels are in place. 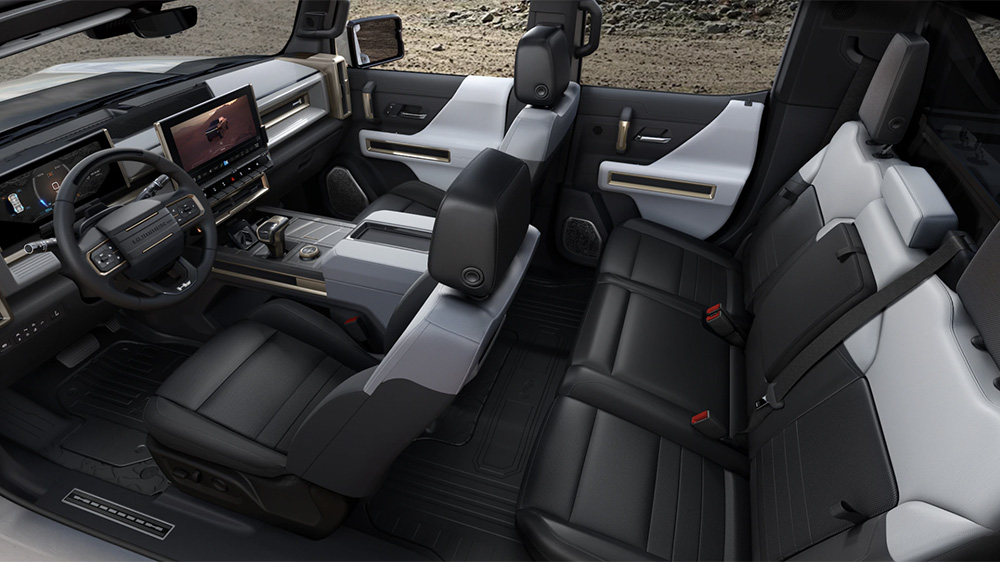 Four Versions to Choose From

The Edition 1 Hummer featured in Tuesday’s commercial will be just the first of at least four versions of the super uteGMC plans to bring to market. It will be the only model available when the Hummer EV goes on sale next year, but will be followed in 2022 by a slightly more affordable three-motor version called the 3X. That ute will produce 596.5kW and 12,800Nm and have a range in excess of 480km. It will be followed in 2023, by the two-motor 2X and in 2024 by the entry-level 2. The latter two Hummers will be able to churn out 466kW and 10,033Nm of twist, but the 2X will be able to go 480km on a charge, while the 2 will only be able to go 400km. An SUV variant is also expected to arrive in 2023, though performance info wasn’t immediately available. 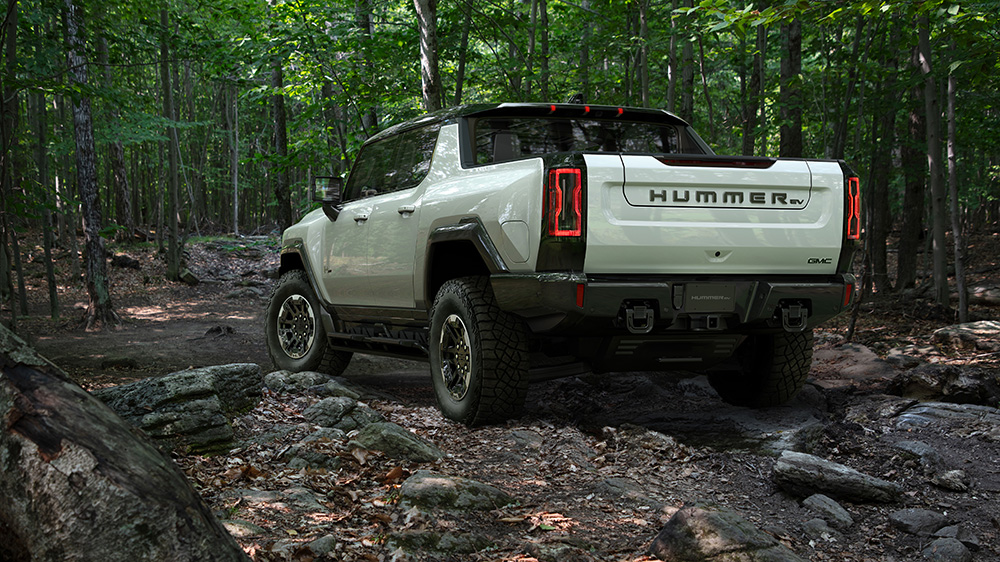 Factory production will commence in 2021, with pricing and local delivery yet to be confirmed.