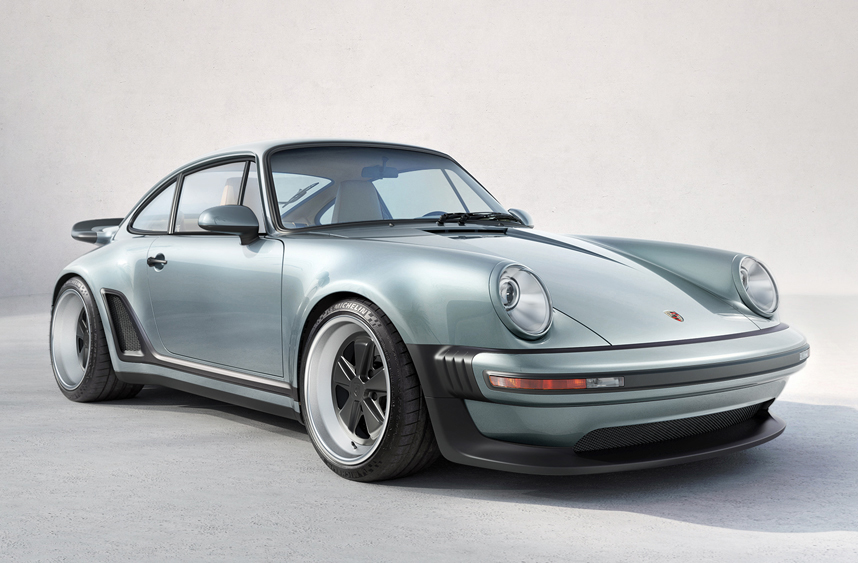 The restoration house has delivered a turbocharged reimagining of the classic air-cooled model variant.

As restomods continue to be all the rage, Singer Vehicle Design remains a benchmark that other automotive ateliers are measured against. Specialists at reimagining Porsche’s air-cooled 964 iteration of the 911 model, built from 1989 to ’94, Singer is known for its innovative restoration and modification approaches that take the variant to new levels of performance and power. Building on the success of its Classic Study from 13 years ago, followed by the 2018 Dynamics and Lightweighting Study (DLS) and last year’s All-Terrain Competition Study, Singer officially announced its latest 964 makeover today, the Turbo Study.

Founded in 2009 by Rob Dickinson, a Porsche zealot and former frontman for the 1990’s British band Catherine Wheel, the restoration house owes its moniker to Dickinson’s previous occupation while also paying tribute to famed Porsche engineer Norbert Singer. From the beginning, Dickinson’s drive to push the envelope of the 964 while staying true to its overall design and engineering aesthetic has been a magnate for potential owners with the same goal. 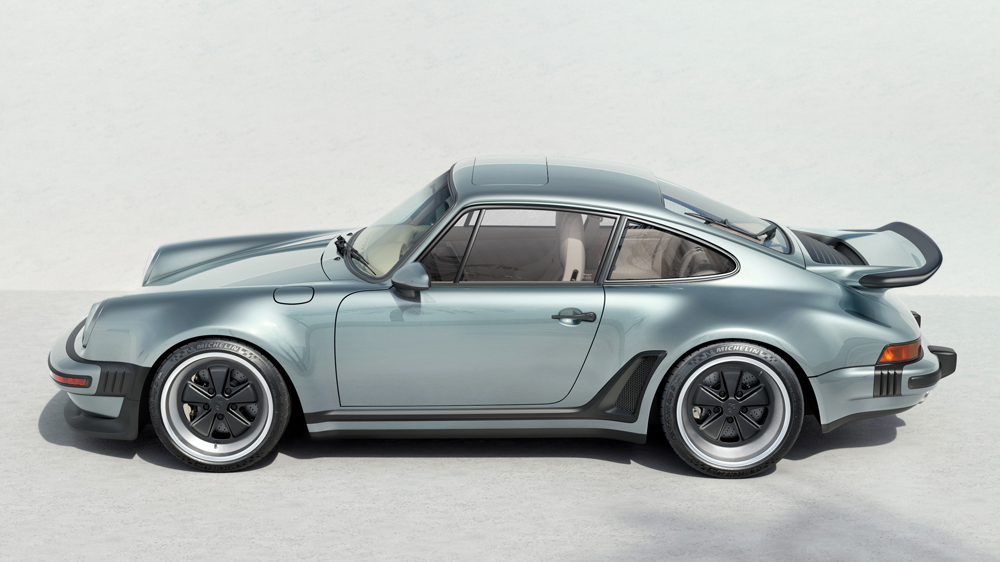 “Like the Classic Study and DLS, the Turbo Study is a collaboration with clients. Over the years the subject of turbocharging has come up in discussion with them on many occasions,” Dickinson tells Robb Report, adding that there has to be “an emotional connection with the project” on his end. “When I was 11 years old, a 930 Turbo was the first 911 I ever rode in and I’ve never forgotten the experience, or the impact that car had on me,” he mentions, explaining that honouring that turbo lineage is “something I’ve wanted to do for a long time.” He goes on to note that as Singer now comprises more than 200 team members and has a new and expanded base of operations in Torrance, Calif., the time for the Turbo Study is finally right.

At the heart of the new package is a revamped version of Porsche’s original air-cooled flat-six that now offers 3.8 litres of displacement. Fit with twin turbochargers, the mill—mated to a six-speed manual transmission—delivers 335kW; quite a bump from the 184kW on hand when the 964 debuted. And there’s more output available upon request. Also added are custom air-to-water intercoolers within the intake manifold. The plan for the engine, and its respective enhancements, posed a challenge in preserving the look of the iconic spoiler, but the issues were ultimately solved without compromising what’s arguably the vehicle’s most eye-catching characteristic. 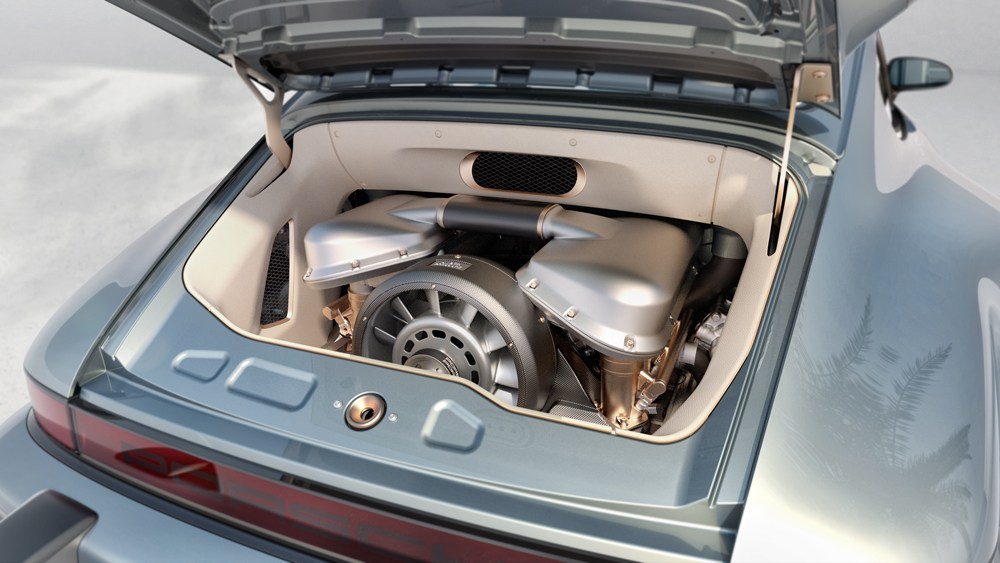 Thanks to a revised 3.8-litre flat-six engine with twin turbochargers, the car delivers 335kW, though more is available upon request. Photo: Courtesy of Singer Vehicle Design.

“I wanted to celebrate the purity of the Whale Tail spoiler found on the early turbo cars,” says Dickinson. “We also wanted to use intercooling for engine performance, but without adding the ‘box’ underneath the spoiler that you see on later ‘Tea Tray’ cars. Careful location of the intercoolers and the radiators has meant that we’re able to keep the slim profile for the Whale Tail.” Also reenvisioned are the “shark fins,” a design element traditionally located at the base of the 964’s back wheel arches, which now serve as air intakes. 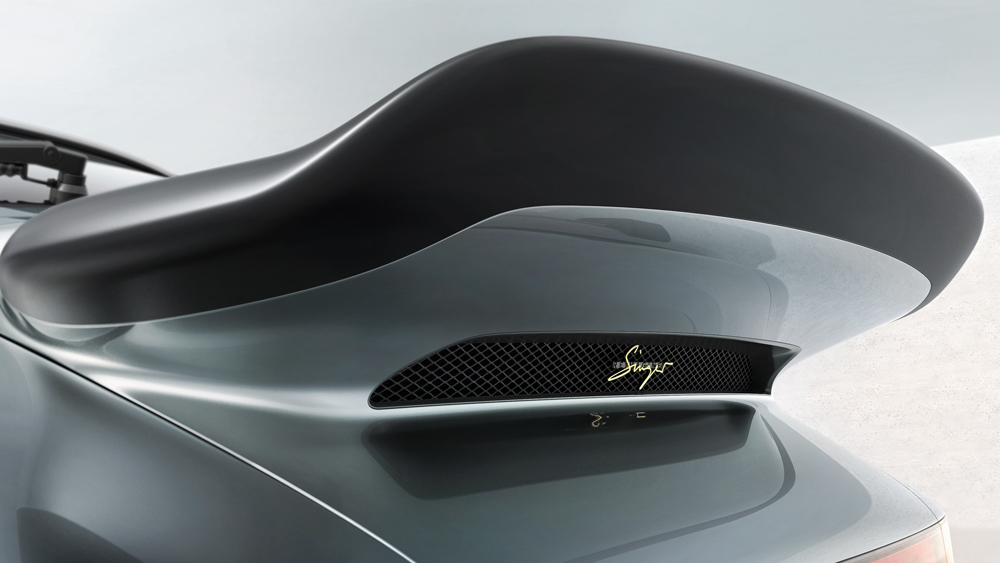 Despite modifications that include the integration of intercoolers, the aesthetic of the 964’s Whale Tail spoiler is not compromised. Photo: Courtesy of Singer Vehicle Design.

Although the Singer restoration adheres to Porsche’s intrinsic styling language for the 964, the wide-body exterior’s material composition is completely different, shedding the German marque’s shell for one comprised entirely of carbon fibre, which cuts the weight while bolstering rigidity to maximise handling. The latter also benefits from the option of carbon-ceramic brakes. And customers will have a choice of either a rear-wheel or all-wheel-drive configuration. 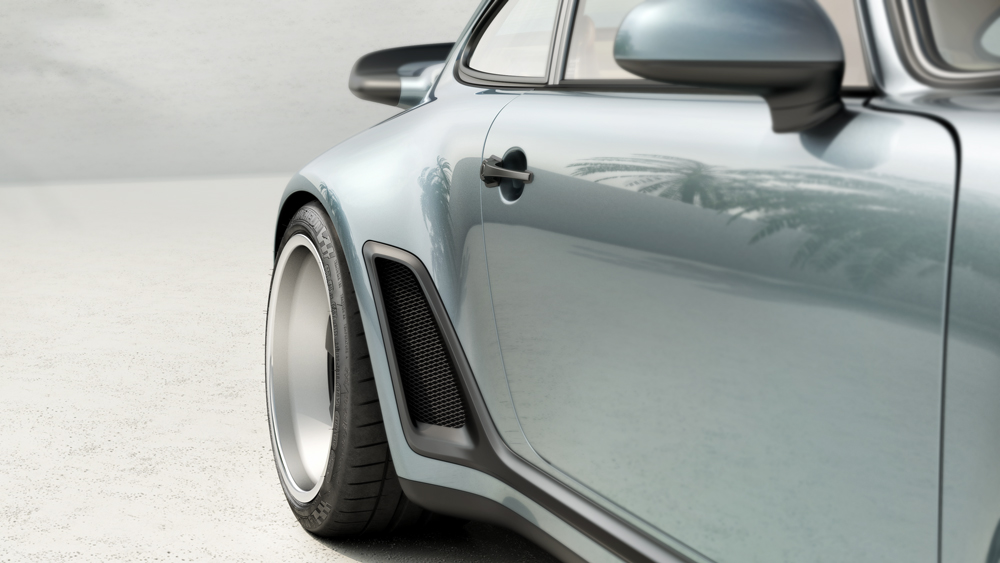 A closer look at one of the “Shark Fin” air intakes. Photo: Courtesy of Singer Vehicle Design.

According to Dickinson, “capability is key,” as his goal is that you can “jump into your all-wheel-drive car with your passenger in London, and then deal with autobahns and alpine passes in comfort before arriving at your ski resort. If owners want to pursue refined, luxury grand touring, we can provide the engineering, interior, new materials . . . and features to allow that.” In line with that directive, amenities inside include electronically adjustable, heated seats as well as air conditioning and a host of other creature comforts dependent on owner preference. 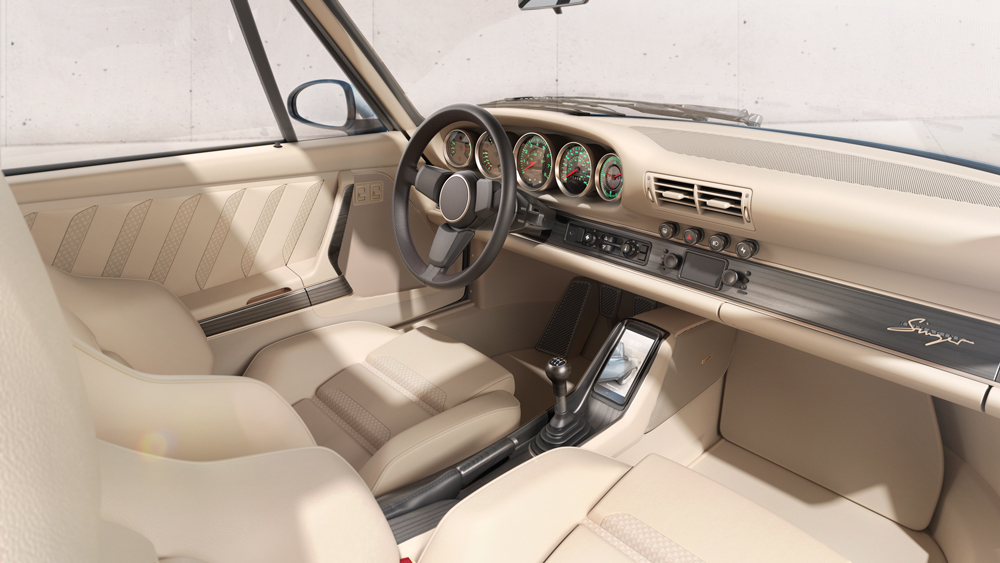 Also determined by each customer’s specific vision is the cost of the latest transformation service, and Singer has not disclosed a baseline for that as yet. But, in general, how does the new package compare to the seven-figure DLS offering? “They’re answering different needs,” say Dickinson, “with the Dynamics and Lightweighting Study celebrating the naturally aspirated, air-cooled flat-six, while the Turbo Study is paying homage to another strand of the 911’s DNA.” 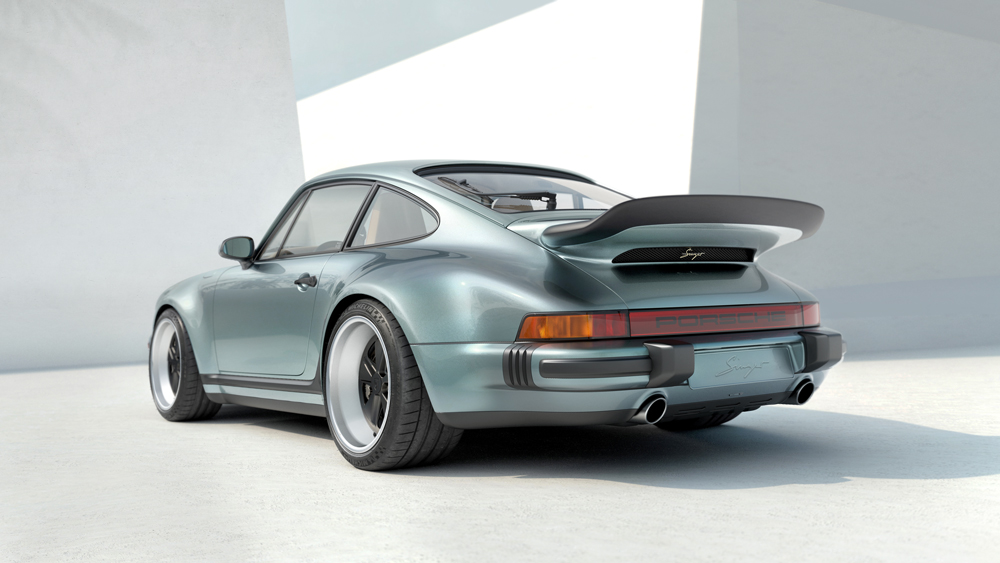 Both all-wheel and rear-wheel drive configurations are options for the carbon-fibre restomod. Photo: Courtesy of Singer Vehicle Design.

Singer’s first tribute to that strand, an example dressed in Wolf Blue and complemented by a Malibu Sand colour scheme within, will make its premiere at the 2022 Goodwood Festival of Speed in West Sussex, England, from June 23 through 26.