There comes a pivotal moment in almost every track session when those with even a passing interest in self-preservation decide it’s time to hang up the driving boots for the day.

Perhaps it’s the central difference between racing drivers and mere mortals—the former are happy to not just tempt fate but actively taunt it, while the rest of us, awash in sweaty fear, promptly retreat to the safety of the sidelines.

That point in time can be born of anything, really—a momentary lapse in concentration, a close shave with a rather inflexible wall. Or the lingering feeling that you’ve somehow gotten away with it for longer than you should.

When Robb Report recently headed to Victoria’s famous Phillip Island circuit for a track session in the new Mercedes-AMG GT R Pro, it was driven by something else entirely. Well, driven by someone else entirely—given that we were, after an earlier solo session, now playing pillion in AMG’s latest four-wheeled bullet. 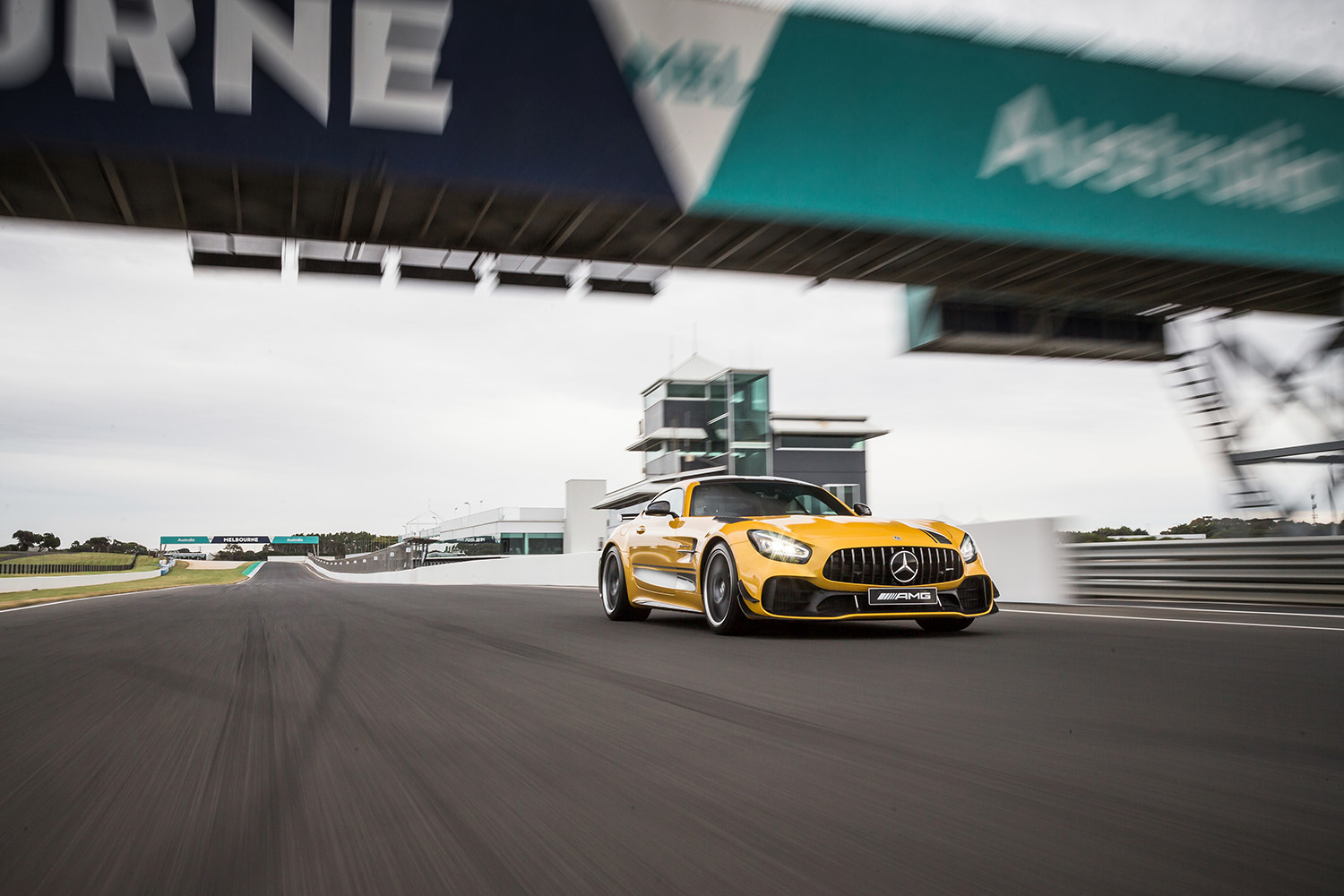 Firmly locked into the hard passenger seat via a multi-point harness, to my right sat the driver in question; Australia’s most successful motorbike racer—and five-time MotoGP World Champion—Mick Doohan, a man so familiar with ‘The Island’ that the fastest corner on the entire circuit (the sweeping right-hander beyond the 260km/h-plus main straight) has been named in his honour.

Doohan had just pushed the AMG GT R Pro to the edge of what felt—to me anyway—a lot like its brutal limits. And in this most monstrous of AMGs, those outer areas are rather considerable.

The brand’s $453,200 performance hero is the kind of angry that invokes your fight-or-flight response even as you approach it. And things only become scarier (more appealing?) once strapped in.

Up front, under what feels like a runway’s worth of bonnet, lurks AMG’s most potent engine—a 4.0-litre bi-turbo V8 that generates a planet-spinning 430KW and 700Nm, funnelling it to the rear tyres via a seven-speed Speedshift dual-clutch automatic. At full flight, it will dispatch 100km/h in 3.6 seconds.

Unlike any electrified rivals, the Pro doesn’t silently streak into the future, rather it explodes from a standstill in a shower of noise so loud your body is genuinely shaken by it. This is more than mere sound.

Here the ‘Pro’ aspect comes from the vehicle’s lineage; this GT R bred is from the brand’s GT4 and GT4 race cars, which means the most hardcore suspension and brakes, all liberally seasoned with carbon-fibre—also used for the torsion bar, front splitter, rear diffuser, wing and even roof.

Compared to the regular AMG GT R, the Pro’s changes are subtle rather than wholesale—tweaks to things like traction and gearing software, engine mounts and the aerodynamics. But the results are impressive. This version is a full six seconds faster around Germany’s famed Nürburgring, despite producing exactly the same power and torque figures.

In short, the GT R Pro is a car designed with a singular purpose in life—to make a mockery of the laws of physics on whatever race track you dare to point its mean-mugging grille at. 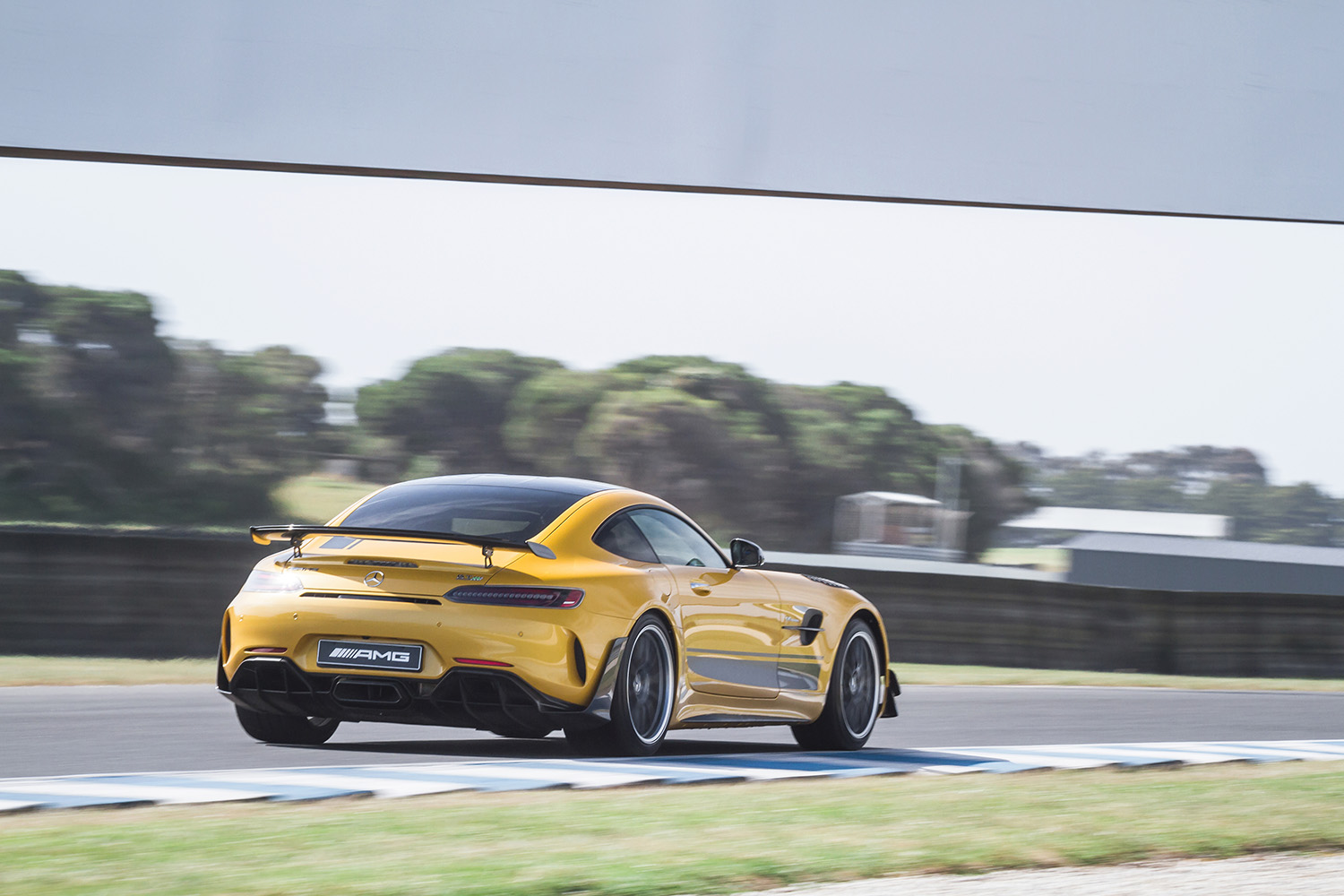 Doohan was in his element, his hands a blur on the wheel to catch the slipping rear, the powerful combination of iron-grip carbon-ceramic brakes and that mountain of power and torque having us both straining backwards and forwards against the GT R’s harness as though strapped into a horizontal bungee jump.

Arriving back at the main straight, and with the speedometer still climbing at an incredible clip, Doohan turned, a slightly unhinged look in his eye, and said, without a hint of sarcasm, “Sorry, that was a bit slow—I’m still getting a feel for the car. I’ll tell you what, we’ll give it a real push on this lap.”

This was my pivotal moment. Even a set of hands as safe and talented as those of Doohan couldn’t convince me not to exit and await my return behind the wheel of this angriest of AMGs.

One of the most exclusive AMG models ever, the Pro will be limited to only 750 units worldwide. Australia will score just 15 of them, the German marque claiming all to be spoken for—though that’s not to say some gentle arm twisting couldn’t be applied to secure one.

If road driving is your bag, perhaps opt for the three-point seat belt. But in a car this grippy and powerful, you’ll want the optional four-point harness, because this is a beast that deserves to be pushed. The latter option lashes any driver to carbon-shelled racing seats like cargo on a ship in rough seas, with only arms and legs free to operate the Pro—entirely necessary on a vehicle that dances with g-forces in the way the GT R does. Also critically important in any car that delivers bonkers levels of power exclusively to a pair of hard-working rear tyres is a multi-stage traction setting. In the Pro, that’s Race Mode, which sharpens the throttle response and dulls the ESC intervention, but critically, it doesn’t remove it entirely, lessening your chances of ending up a part of the race track’s architecture should you get overly familiar with the accelerator.

Perhaps the most important, and impressive, addition though is the carbon-ceramic brakes at each corner of the car, biting with hard-to-believe force and slowing the GT R so effectively you need to redefine your idea of braking markers, lest you find yourself slowed to walking pace by the time you actually turn in.

If I’ve driven harder, faster, sharper tools than the GT R Pro, I can’t immediately recall them—but this is less a case of exhilarating acceleration and more a testament to all of AMG’s bits working harmoniously together.

The steering is sharp enough to shave Goodfellas garlic, with even the lightest input immediately making its presence known in the cabin. The brakes, as mentioned, are violently effective, while the grip from those wide, rear pieces of rubber allows for superhuman speeds into and through the corners.

And because sound-deadening insulation has been discarded to save on weight, it’s all accompanied by a snarling, booming exhaust that bounces around the cabin like a malevolent spirit.