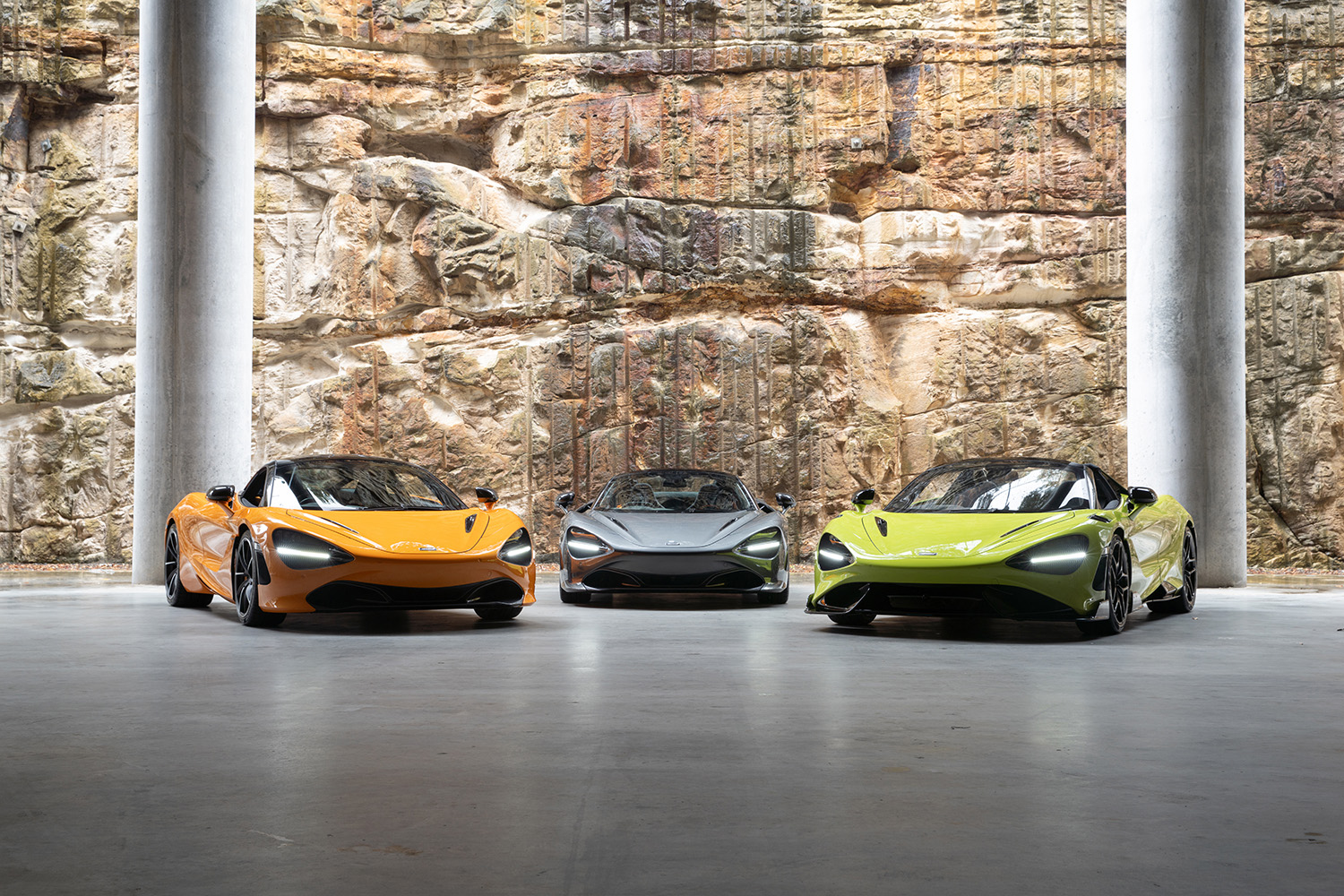 This supercar is super-fast and super-likely to eat drivers who refuse to handle it with care.

You might well own a supercar. In which case, good for you. Because you’ll have had time to get used to how violent and intimidating it can be to drive—and to build up your bravery to the point where you can at least see the edges of its vast performance envelope.

Imagine what it’s like, however, to be given just a few hours to attempt to push, poke and generally annoy one of these angry beasts because it’s your job to evaluate and write about them.

Here’s what that’s usually like. You spend the first few hours of your relationship being very, very careful indeed, and trying hard not to think about the purchase price. You leave all the sporty settings off and, a bit like approaching a vicious-looking dog, you try to work out just how likely it is to bite you.

The initial impressions from the McLaren 765LT Spider are a little daunting. Yes, it’s a convertible, and that often means it’s a bit of a poseur’s supercar, and certainly not one built for the track, but it takes about 10 seconds to realise that the is different in this respect. 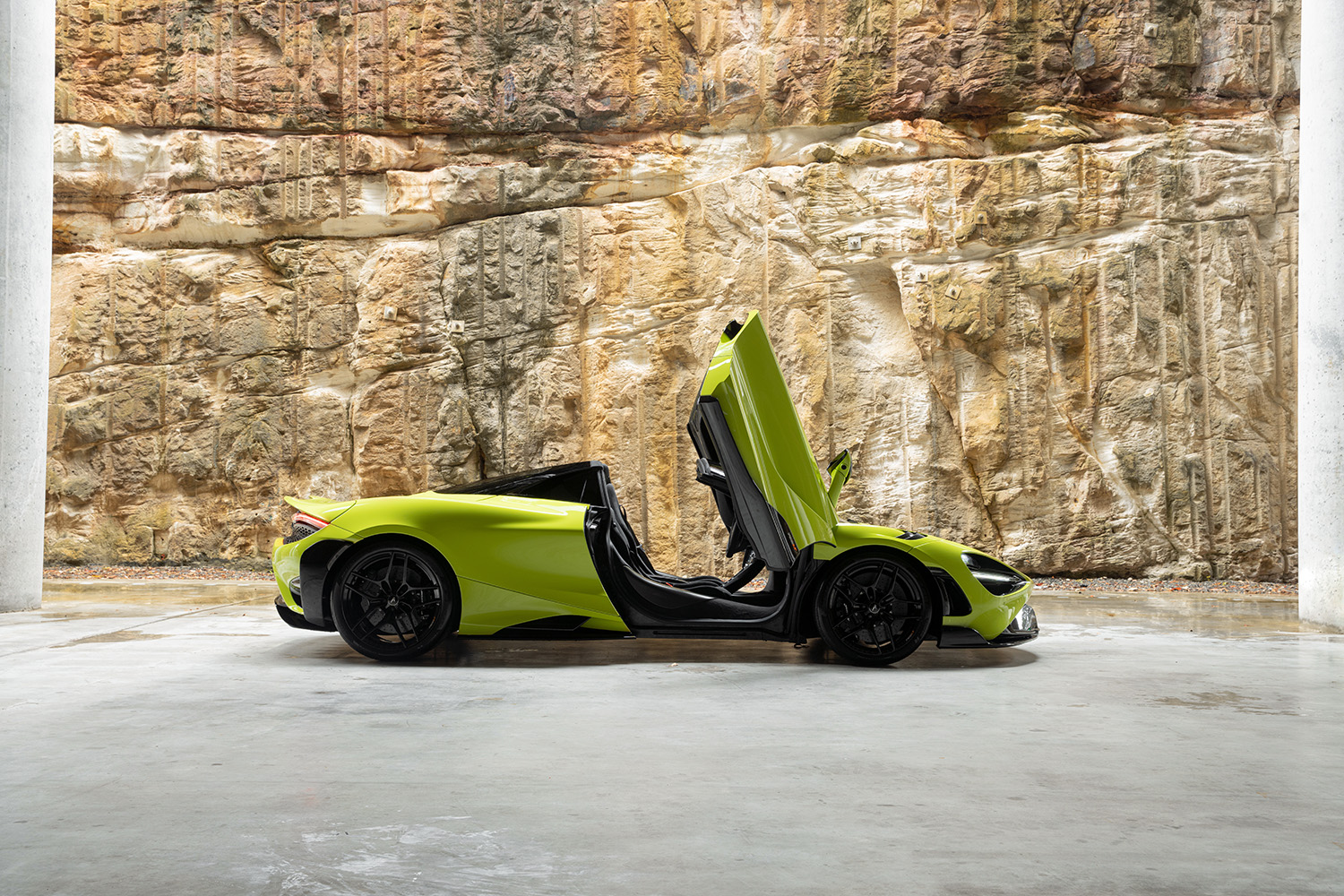 Everything is brutally firm—the floor under your feet, your seat, the ride—and everything you look at or touch, even the steering wheel, seems to be made of carbon fibre. Even the way you sit in the car, the driving position, makes you feel like you’re in a single-seater race car of some kind.

The way it steers—darty, right on the edge of being too sharp—and stops, using its huge carbon ceramic discs with six-piston callipers at the front, and four-piston units at the rear, also feel far closer to the kind of track-only vehicle that wouldn’t be allowed to wear registration plates.

Then there are all the buttons, which activate the kind of aerodynamic activity normally only seen on F1 cars when the DRS is allowed. Brake even a little hard in the McLaren, quickly check your mirrors to make sure that no mere-mortal car is about to rear-end you, and you’ll realise you can’t see a thing in the rear-view mirror. (The designers might well argue that you don’t need to see what’s behind you in a McLaren, because nothing is ever going to catch you.)

The active aero on the rear wing means that it swings into position, blocking out everything behind you, while also providing massive downforce so that, even if you are nailing the brakes into a high-speed corner at the Nürburgring—which is where it feels you should be—you’ve got incredible grip, and the front end feels nailed to the ground. 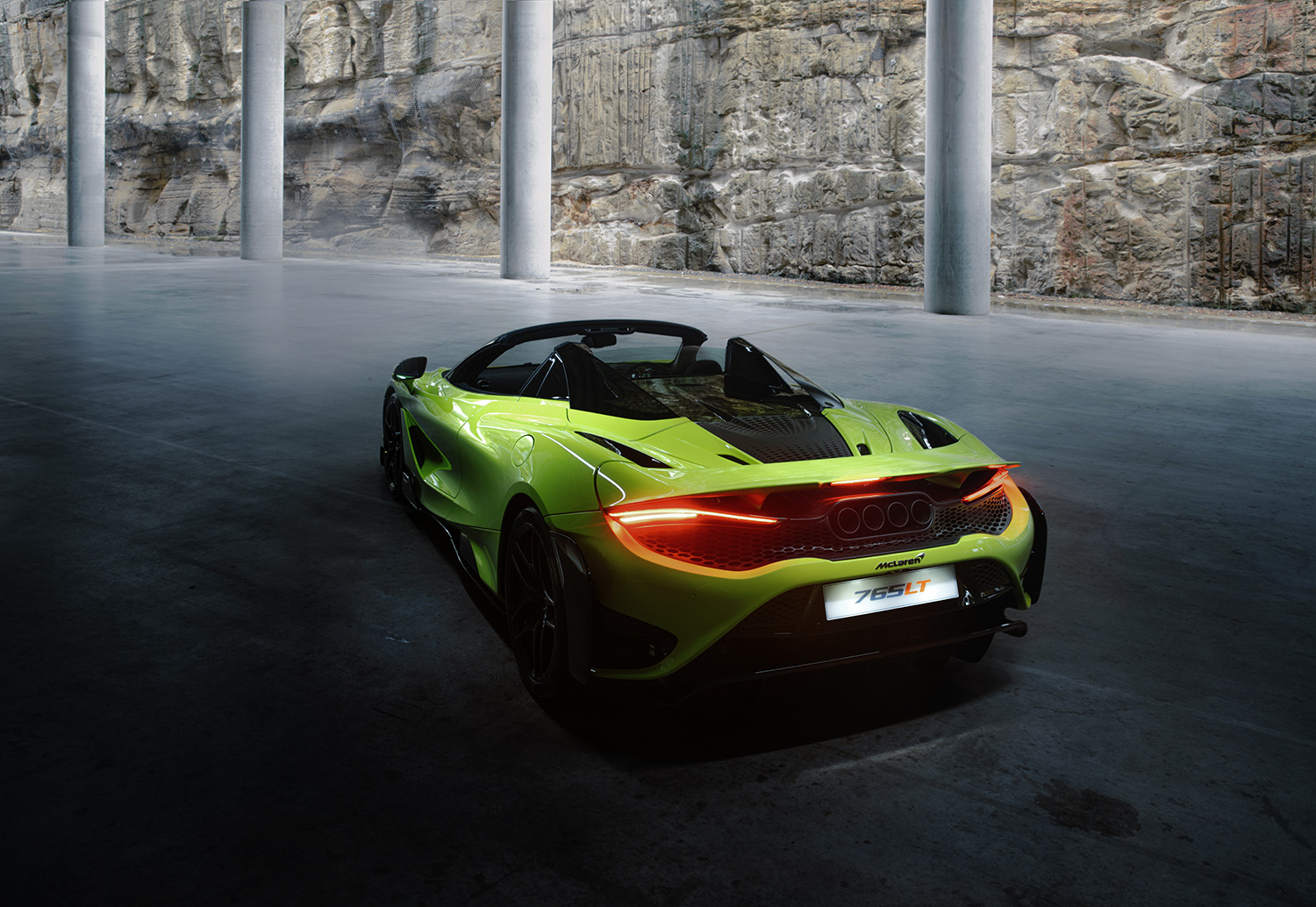 Other buttons allow you to switch between “Comfort”, “Sport” and “Track” settings for both performance and handling. But here’s the unusual thing. While I generally always start out at the “Comfort” end and then force myself to progress to the “Track” side of things, in the case of this spectacularly insane 4.0-litre twin-turbo V8 McLaren, I never once dared to go beyond “Sport”.

The other thing that usually happens over a day or two with a car like this is that you build up to actually pushing the throttle flat to the floor. Sure, in a VW Golf R, or even a Porsche, you might be willing, and safe, to go the full beans immediately, but supercars are more like wild horses, and if you kick them too hard before you’ve gotten to know each other, it can go badly.

Again, however, I’m slightly ashamed to say that I never, ever managed to flatten my right foot on the accelerator in the 765LT, although I sure hit the brake pedal pretty damn hard. And, I must say, the stoppers are fantastic; both hugely effective and with truly excellent feel and modulation. They also have to work a lot harder than most brakes.

Now, I’m not about to suggest that this McLaren is too fast for public roads, but I might at least float the theory that the way it delivers its power—like a punch to the face, or a bullet to the temple, even—is a little too daunting for anyone who isn’t a professional racing driver. 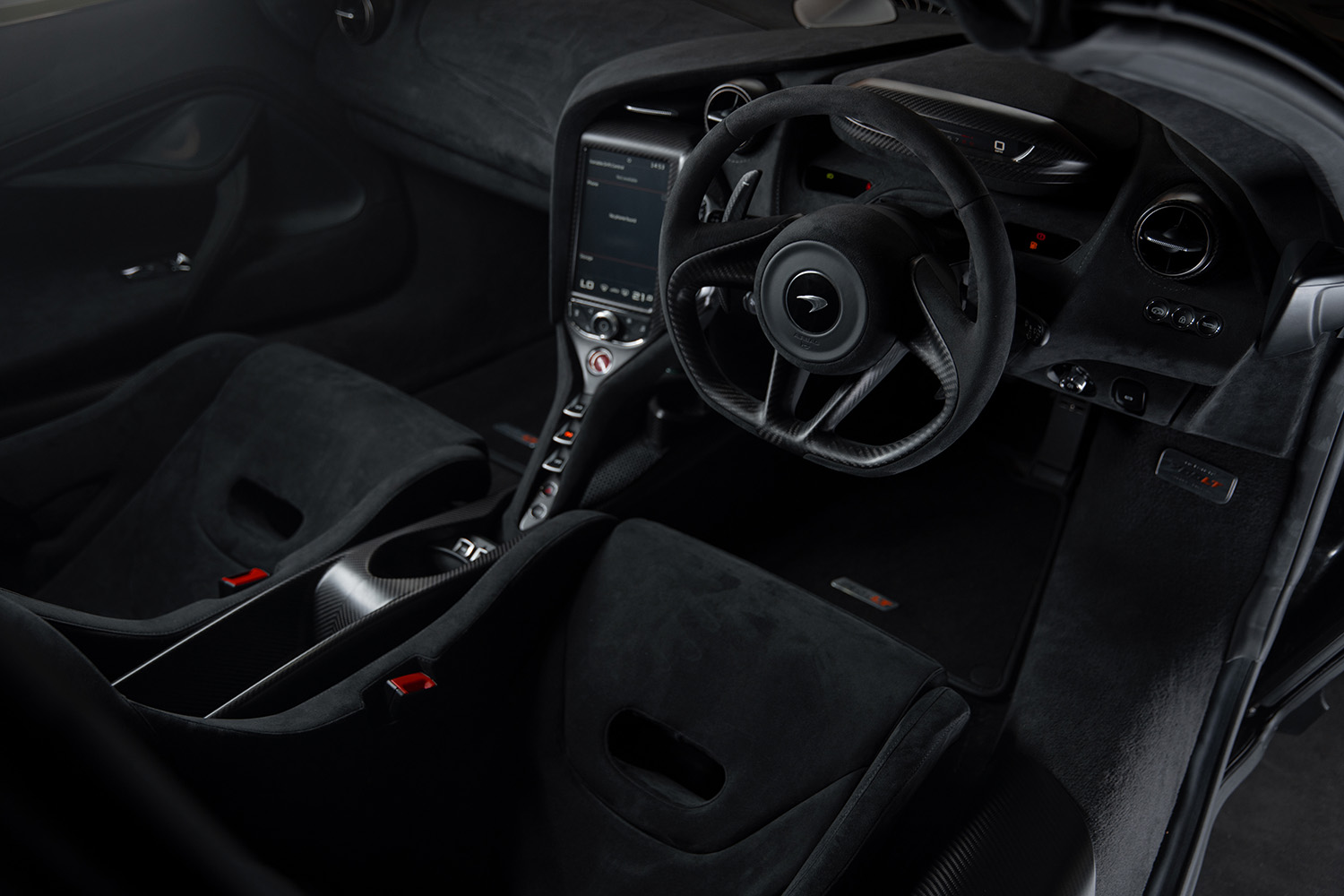 The 765LT has a lot of power at its disposal, 563 kW and 800 Nm, but hey, that’s what modern traction software— no doubt developed by some of the smarter people who work for the brand’s F1 team—and huge, fat, sticky tyres are for. And yet no, because McLaren has made the crazy brave decision to attempt to put all of the mumbo to the ground through the rear wheels alone, and the result is sensory overload, and the need for brown pants.

Apply even three-quarter throttle in this car and not only are you smashed back into your rock-hard race seat, but you are forced to grip the thin, sexy carbon-fibre-laced steering wheel a little tighter as you get the sensation that the tyres are about to give up and start crying. Or explode.

There’s literally a scrabbling sound as the rubber tries and fails to push all that power into the ground and then, naturally, one of them gets more grip than the other and the back end starts to step out. All the while little computer-generated lights flash on your dash, no doubt saying “I give up”. 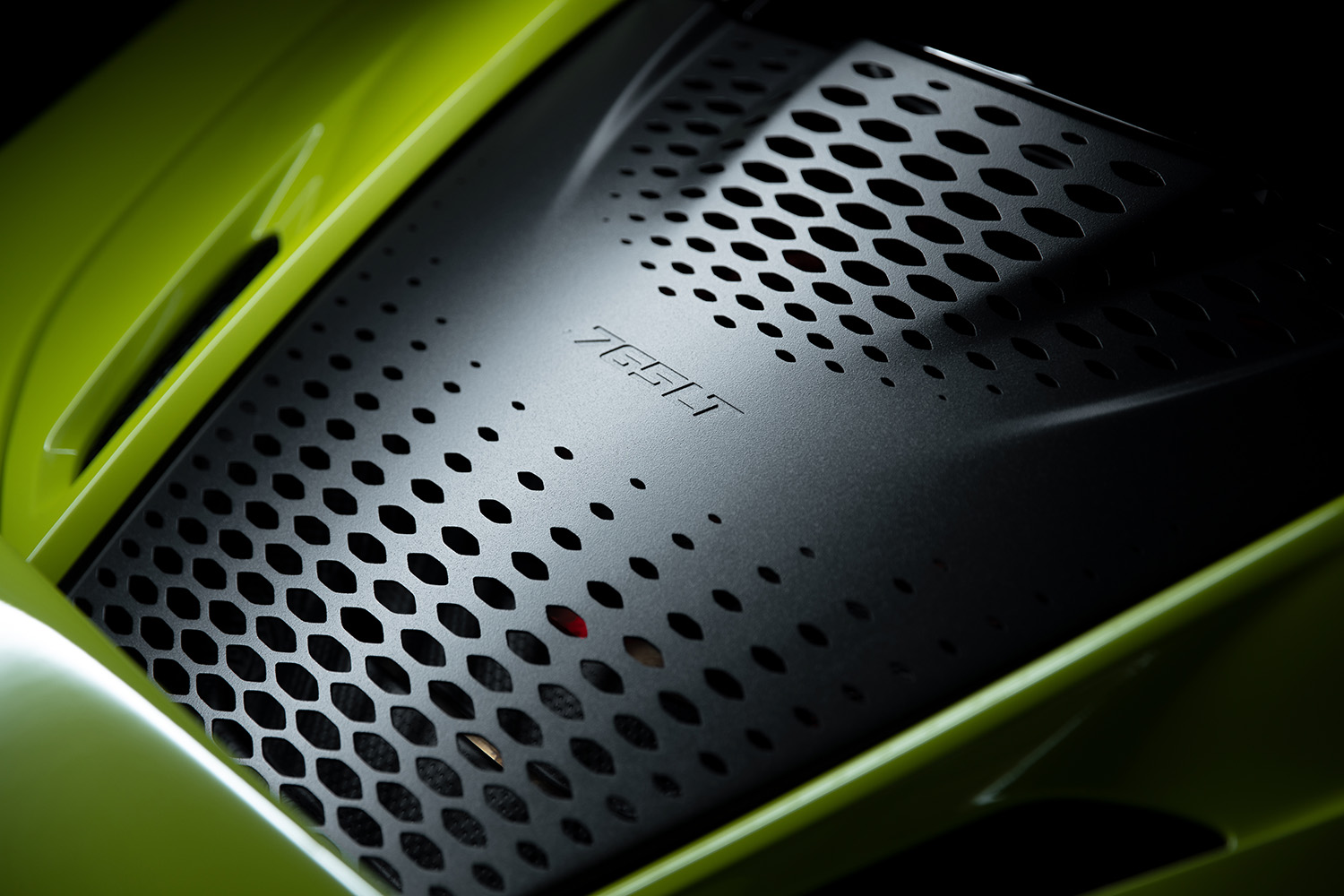 And remember, this was not full throttle, and the road was dry. The next day, when it was raining, I stayed in the house, peeking through the blinds and hoping no one would notice that I was too scared to go out and drive the beautiful-looking car on my driveway. I can only guess that at full throttle, in the wet, you would spin in a circle on the spot and go nowhere at all, or that you would end up buried nose-first in the fifth floor of the nearest building.

Again, I’m not one to complain about power and speed, and as long as you are cautious, and feather the throttle appropriately, the 765LT is a staggeringly hilarious and hugely involving car to drive. You need to be a bit careful, yes, but you can still have a metric shit tonne of fun driving it, and scaring the wits out of your passengers.

Indeed, it has the entertaining ability to put you wherever you want to be— 500 metres up the road, around the next bend—as soon as you think about being there. It’s quite the party trick.

The handling and the downforce in particular also make it an absolute weapon to throw around corners, and the way it shifts gears, when you choose to use the carbon-fibre (of course) paddles on the wheel, is a particular hoot. Each shift feels like a somehow pleasant punch in the back, and if you get the revs just right on your downshifts you’ll also get to make what sound like gunshots come out of the exhaust pipes, even as they spit fire.

In the previous McLaren LT I drove, those pipes were almost vertical and right behind your head, which meant you could enjoy the fire show with your rear-view mirror, but sadly the big quad pipes on this Spider are a bit more sensibly placed—perhaps so they don’t melt the folding roof panel (which I would never use, as it sounds so much better with it off, and I’d never drive in the rain anyway, too scary). 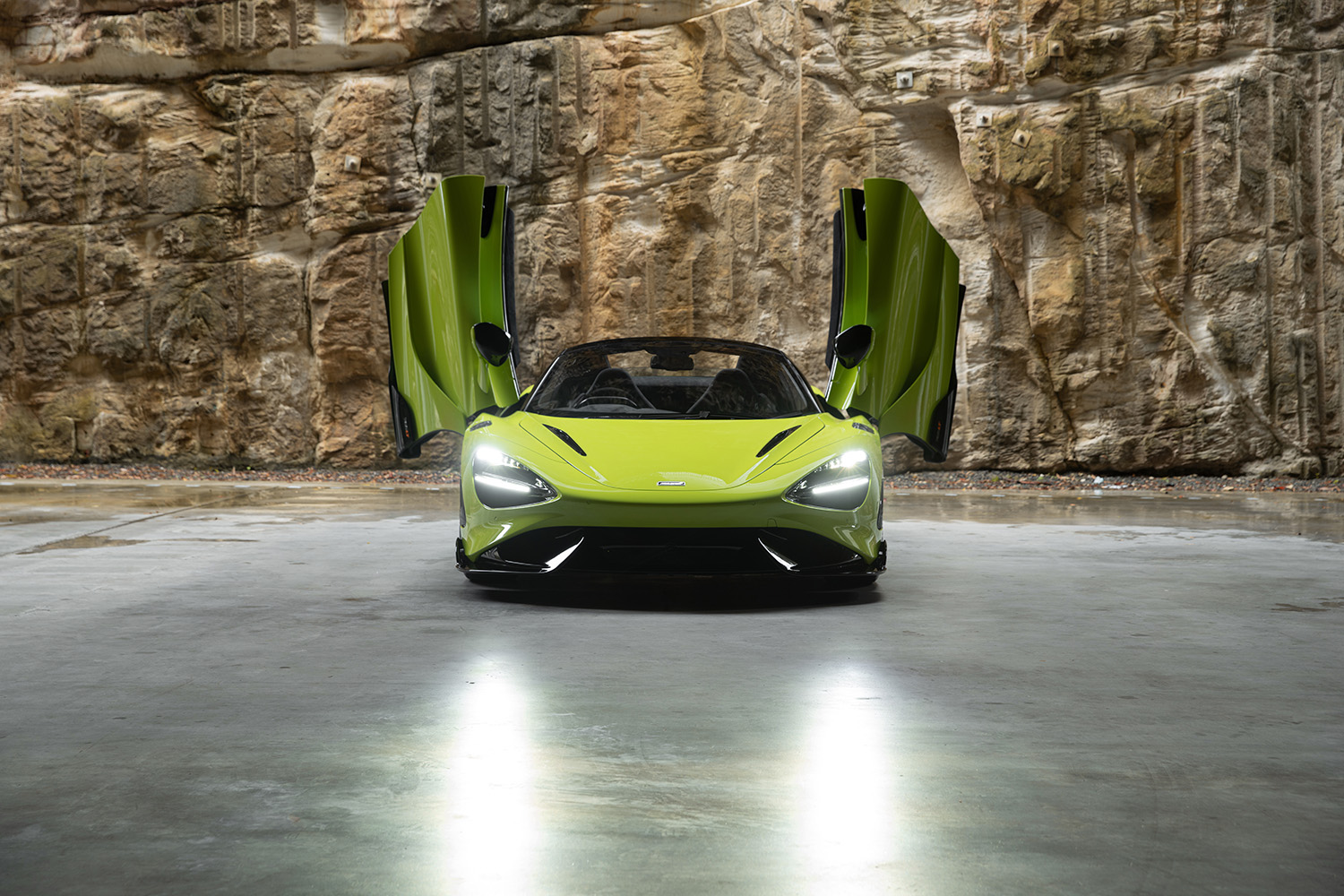 What has not changed is that the LT badge defines a McLaren that sounds like a proper supercar should. For too long, McLaren got almost everything right about making extremely hyper, exciting cars, except the noise. They sounded a bit like photocopiers, or perhaps something less interesting. But it seems that the engineers heard the complaints because this particular twin-turbo V8 makes properly sonic booms and the kind of crack-bang explosions that annoy neighbours you’ve never even met yet.

In terms of styling, those giant exhaust pipes halfway up its rear end are certainly eye-catching, but otherwise, there’s something that bugs me slightly about it.

Perhaps the fact that it looks a bit like a bug, from some angles. Still, I love the doors and there’s no denying that it’s something of a visual event, from every side, and even from a distance.

The spartan interior approach that McLaren likes does still set it apart from its Italian competitors, however. There’s not a lot of expensive feeling, or smelling, leather in the 765LT’s interior; it’s all business, all the time, and that business is going very fast indeed. 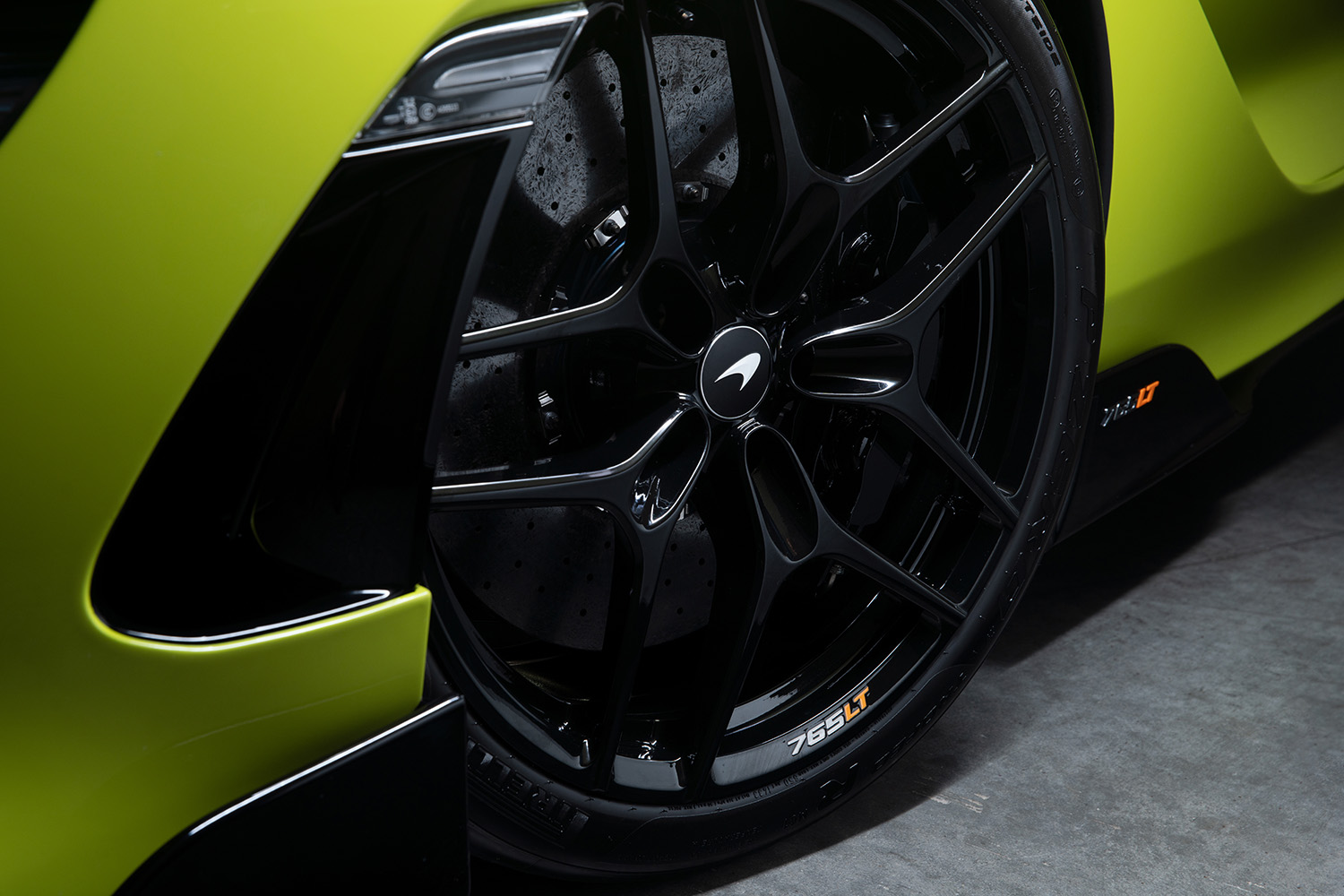 All of which does make me wonder why they make a convertible version. Yes, it’s nice that you can have even more of that over-the-top noise in the cabin with you, but cutting the roof off any vehicle is going to involve compromise. The Spider manages to weigh just 49 kilograms more than the 765LT coupe, which is impressive, but a lot of weight-saving tech went into keeping that number down, including thinner windows, titanium exhausts and lighter suspension parts and wheels. The roof itself is one piece of snazzy carbon fibre and it can be raised or lowered in just 11 seconds, at speeds of up to 50 km/h (at which point a McLaren feels like it’s crawling).

Most impressively of all, the Spider loses nothing in the speed stakes to its hard-topped brother, as both can hit 100 km/h in 2.8 seconds, and a top speed of 330 km/h. I have absolutely no doubt about its ability to do so. Sadly, only 765 examples of the 765LT will be built worldwide, so if you’re the kind of person who likes to wrestle crocodiles and pours piranhas into your cereal bowl of a morning, you’d better slap your deposit down fast. This incredible, hugely memorable wild machine can be yours for $684,900. I wish you the very best of luck.