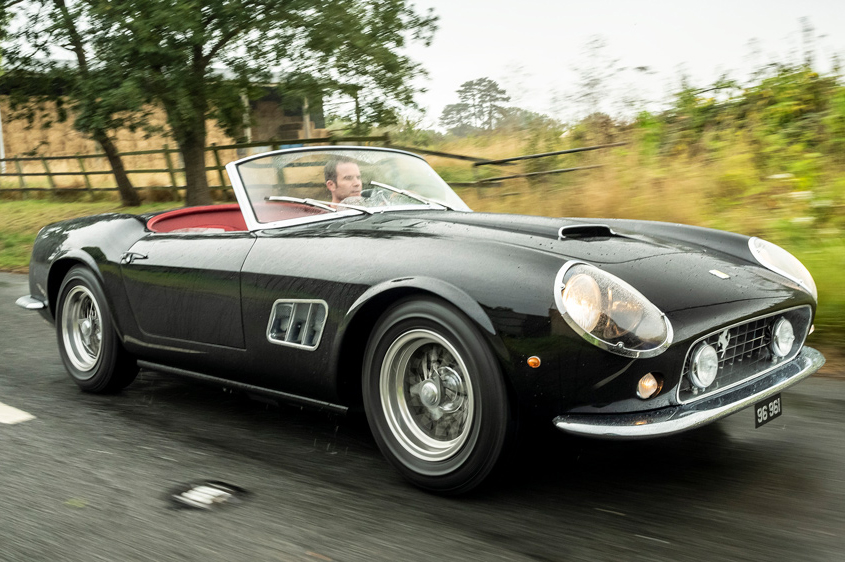 This replica of the Ferrari 250 GT SWB California Spyder made us feel like singing.

If you grew up in the 1980s, then an iconic scene from classic teen movie Ferris Bueller’s Day Off is probably etched in your memory; the one where a red Ferrari gets airborne while the title theme to Star Wars provides the soundtrack. This cinematic moment stars a Ferrari 250 California Spyder on a full-throttle joyride around Chicago. The “Prancing Horse” used during filming, however, was actually a fibreglass replica based on a humble MGB. The faux California Spyder I’m testing, though, is rather different.

The latest Revival project from GTO Engineering, following its replica 250 GT SWB we drove earlier this year, is an inch-perfect, toolroom copy of the Ferrari original. Even Enzo himself might have struggled to spot the difference—unless he got behind the wheel. It turns out that this reborn 1960s supercar, which uses the identity of a scrapped classic Ferrari for legal purposes, has a few hidden secrets. 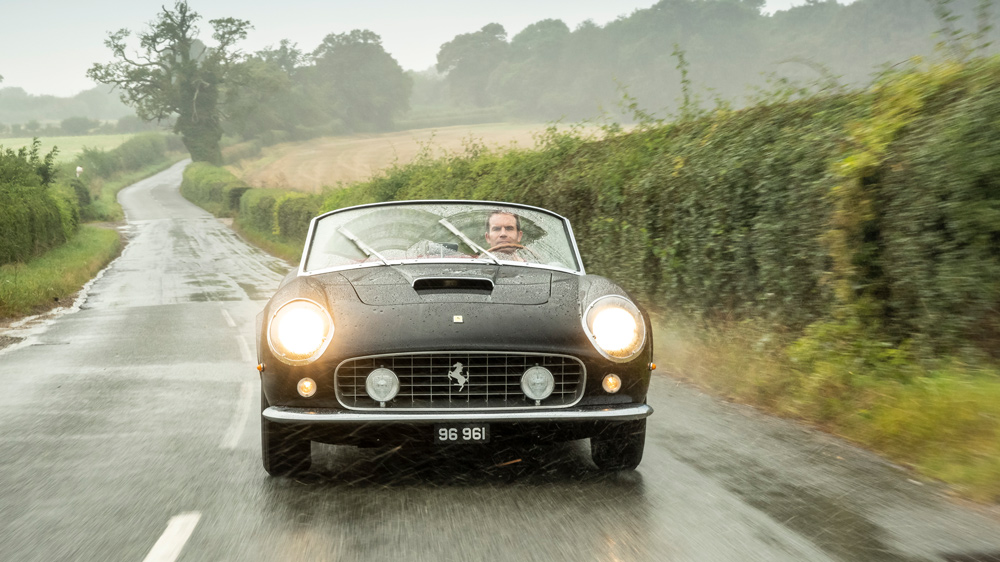 As its name suggests, the Ferrari 250 California Spyder was designed for the US market, specifically the Golden State. Just 105 were made between 1958 and 1962, the first 50 with a 102-inch wheelbase (LWB), followed by 55 with a shorter 94-inch wheelbase (SWB). Today, both versions count among the rarest and most expensive Ferraris of all, as attested to by the fact that James Coburn’s California Spyder sold for approx. $13 million in 2008, and few are ever seen outside of museums or private collections.

I won’t attempt to get all four wheels off the ground today, yet I do plan to drive as il Commendatore intended. After all, the Revival may cost $1.4 million-plus on roads, but it’s still a bargain compared to the real thing. Sadly, I’m about 8690km from California and the weather here is decidedly more British. Yes, it’s raining. Did I mention the car has no roof? 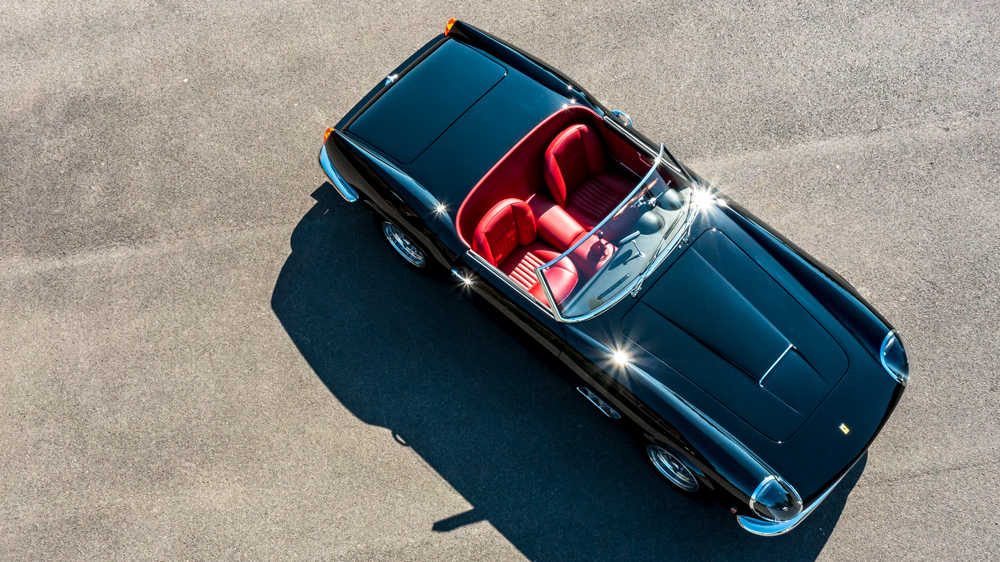 A birds-eye perspective of the toolroom copy. Photo: Courtesy of GTO Engineering.

Even through a mist of morning drizzle, the California Spyder replica looks jaw-droppingly gorgeous. The original was styled by Pininfarina, its hand-rolled aluminium body combining timeless Italian elegance with head-turning Hollywood glamour. A Ferrari with tail fins really shouldn’t work, yet somehow it does. Other 250-series models, such as the Testa Rossa, LM and GTO, are more exciting, but they’re not as achingly beautiful.

Frankly, few cars sound this exquisite either. The naturally aspirated, triple-carb Colombo V-12 is built in-house by GTO Engineering and offered in three states of tune: a stock 3.0-litre Ferrari spec with 205kW, a 3.5-litre with 235kW, or a 4.0-litre with 257kW. With the middling 3.5-litre motor and just 1050kg to shift, this example hits 100km/h in 6 seconds and has a hair-tousling top speed of 240km/h—yet it feels faster. 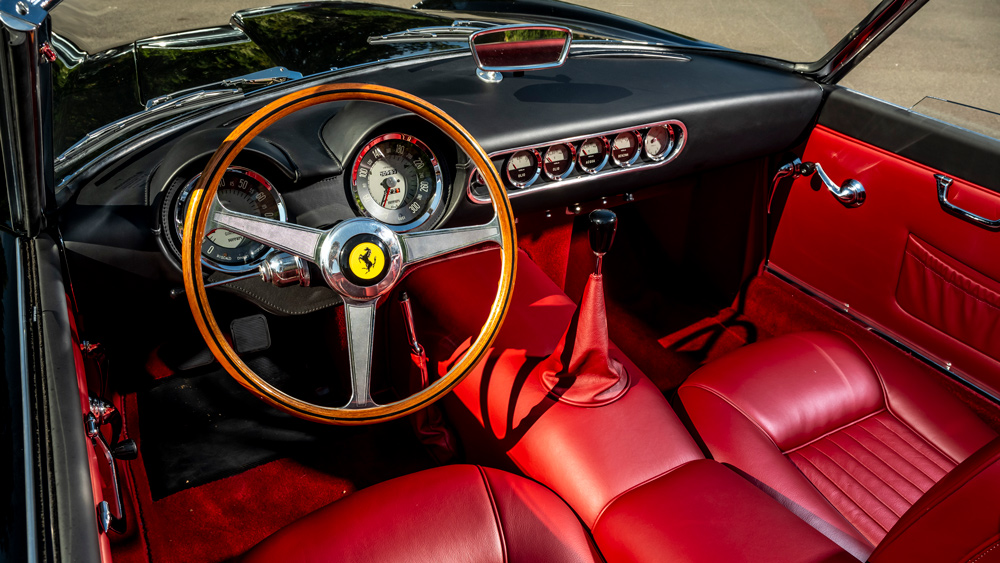 After a few steady miles to let the oil warm through and the manual shift to loosen up, I finally get a chance to let rip. The V12 wakes up at 3000 rpm, then piles on speed with dizzying intensity. Don’t forget, this is an engine that won Le Mans multiple times, and its racing roots are still readily apparent. Hearing its metallic war cry in the open air is a privilege that makes getting wet seem totally worthwhile. 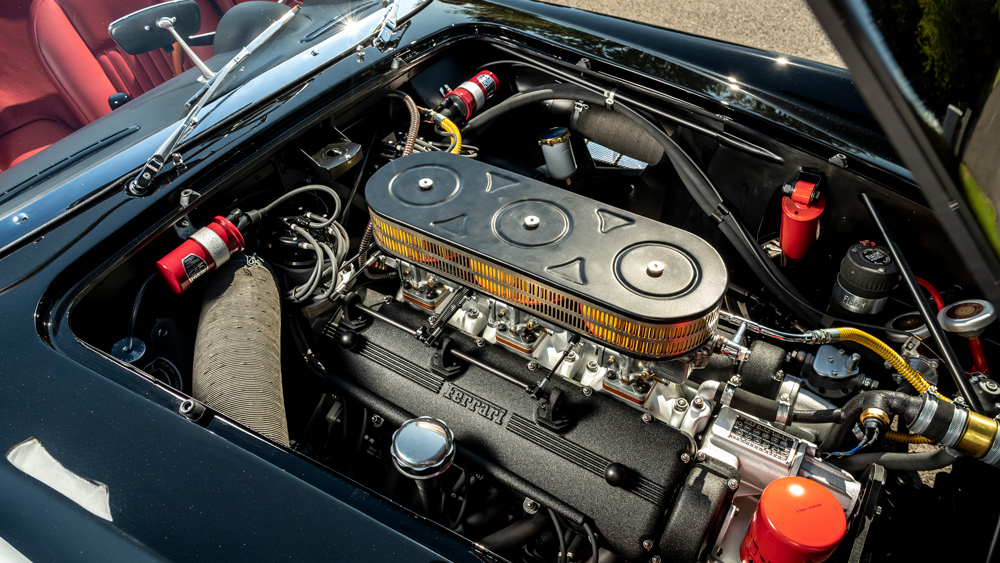 On hedge-lined lanes strewn with deep puddles, I’m initially reluctant to push too hard. However, despite a live rear axle, skinny Michelin tires and complete lack of driver aids, this car has a chassis that quickly breeds confidence. The Revival’s reinforced sills are much stiffer than those of the 1960s Ferrari, which adds accuracy to the slow-paced steering and sharpens its neutral— yet eminently throttle-adjustable—cornering attitude. It’s straightforward, old-fashioned fun.

As for the lack of a roof, GTO Engineering founder Mark Lyon says the company can create one, but he thinks the Spyder looks better without it. Also, he reckons most cars will find homes in hotter climes, including California, where clinging, rain-soaked jeans are rather less likely. At least my Mazda has heated seats for the long drive home. 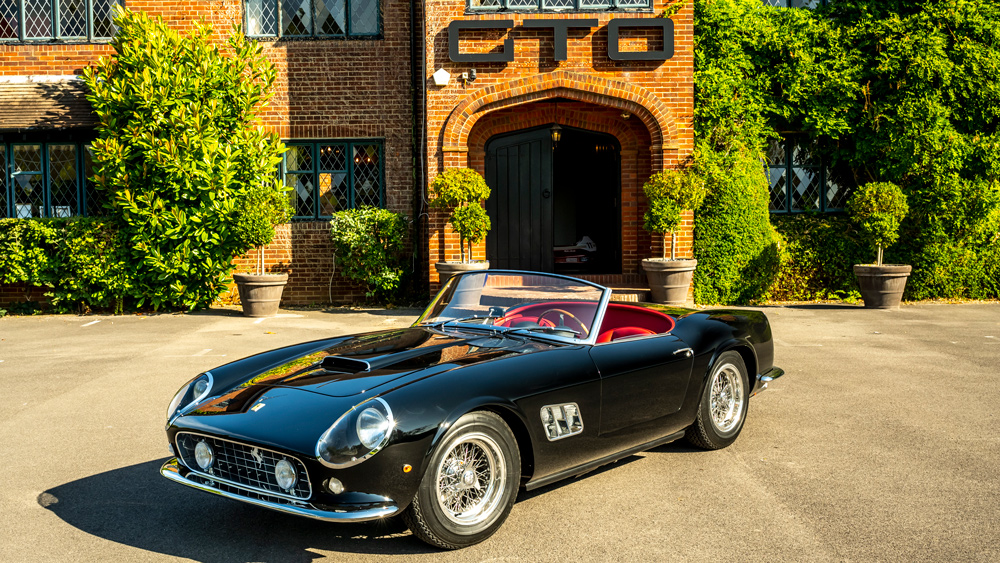 Some Ferrari purists dislike the idea of replicas, no matter how faithful to the original. But when the genuine article is too valuable to drive, these cars recreate an experience that is otherwise out of reach. Whether you’re blasting along country lanes in southern England, cruising Stateside on Pacific Coast Highway or simply watching it drive by, the Revival offers an experience to savour. It’s a car to seize the day and live in the moment. I think Ferris Bueller would approve.