The Prancing Horse’s new GT is more than a pretty face – it’s a love letter to Italy.

When it comes to design, few phrases have carried as much weight as “made in Italy”. The stylistic prowess of these three little words and the passion they invoke has infatuated the international cognoscenti for centuries.

In the modern era, Italian craftsmanship has influence across multiple industries—architecture, yacht building, cuisine, furniture, fashion, art and, of course, the automobile. The endeavours of ‘the boot’ are unsurpassed in the relentless pursuit of visual perfection.

Channelling the hedonistic ideology of mid-20th-century Italy comes Ferrari’s lithe new GT, the Roma, which aims to invoke the spirit of the country’s beauty and freedom. Even Maranello’s marketing material for the car reads “La Nuova Dolce Vita”, or, “The new sweet life”. The charmed era of the ’50s and ’60s was a pivotal time for both Italy and the Prancing Horse, not only economically, but stylistically: it saw the birth of the gran turismo. The Ferrari 212 Inter, 250 Europa, 250 GT Lusso and 330 GTC4 were all Pininfarina-designed GTs with perfect proportions, handsome lines and intoxicating V12 engines. Now held as some of the most desirable Ferraris in existence, these GTs of Ferrari past helped introduce Italian styling to the world, and also play muse for the retro-futuristic look of the incoming Roma GT.

“It was crucial to approach this project as a search for purity, sensuality and an essential line,” offers Ferrari’s senior vice president of design, Flavio Manzoni, on the departure from the more aggressive lines of Roma’s older siblings. “We wanted to clarify what a GT car was for Ferrari, compared to a sports car.”

Don’t be deterred by its pretty looks—the Roma has all the performance trappings of a Ferrari. Behind its lurching shark nose is a more powerful version of Ferrari’s famed 3.9-litre twin-turbo V8, found in the slightly less-expensive Portofino. The two may be closely related, but the Roma is 100kg lighter, and 70 per cent of the car is new. Gains include a close-to-flawless eight-speed dual-clutch gearbox, derived from the SF90 Stradale, a new valvetrain and a particulate petrol filter to meet new Euro 6 emissions guidelines. Not that anyone would know from its unmistakable throaty baritone. Ferrari’s engineers have put some very innovative efforts into eliminating attenuation and compensating for engine backpressure and power loss caused by the new exhaust system. In short: 456kW of power and 760Nm delivered with emotion and efficiency, with a bonus emissions reduction of 12g/km over the Portofino.

We meet Ferrari’s new 2+2 GT coupe in Piedmont in Italy’s north. This is the home of viticulture, Nutella and the slow food movement: in other words, gran turismo territory. The undulating, slippery, snake-like roads of these hills are no match for the Roma’s effortless dynamics—and like a true GT, out here it exudes a whiff of smug. The new ’box moves seamlessly between gears with zero turbo-lag, the brakes are everything you’d expect from the marque, and the adaptive dampers make the Roma’s ride hard to fault. This coupe soaks up languorous power-drives and cambered roads with joy, so much so we found ourselves daydreaming about this Ferrari on Australia and New Zealand bitumen, and how well suited it will be. 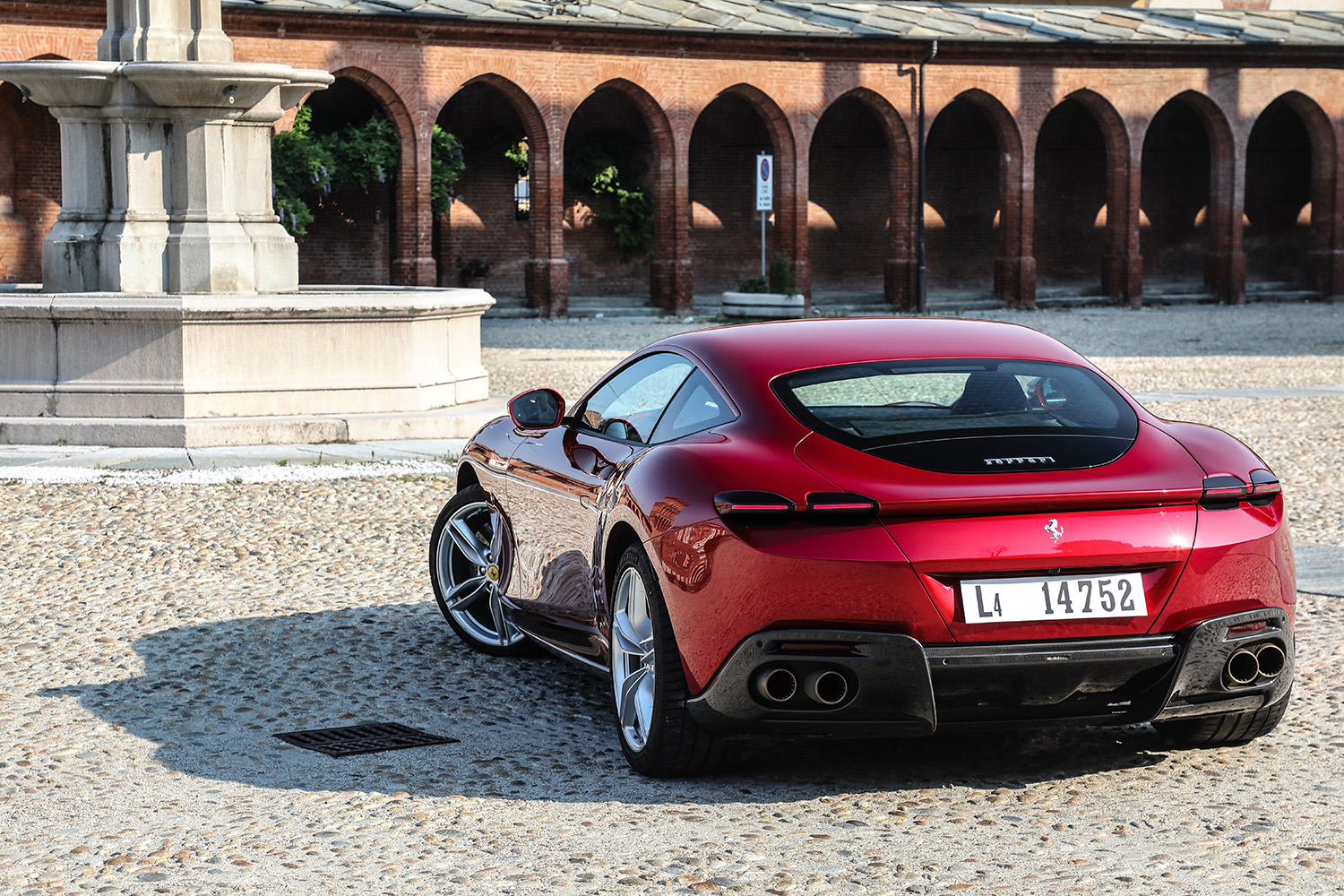 The Roma can certainly bellow across the mountains at 7500rpm, and its performance potential will haunt you (0-100km/h in 3.4 seconds; 0-200km/h in 9.3). But its drama is refreshingly understated—even its aero trickery is hidden from view. If that’s your bag, the badge is optional too—because Ferrari has realised not everyone wants to make a statement ending in an exclamation mark.

As beautiful as the Roma is, it can get tail-happy when the five-setting manettino switch is flicked to the right. This is one of the only remaining analogue elements of the Roma; the rest of the driver experience arrives via an impressive digital interface, a 16-inch control screen, voice recognition and capacitive touchpads aplenty. After a while movements become intuitive, which is a good thing as Ferrari has sunk a lot of R&D into reducing driver distractibility.

The pod-like cabin is styled as a dual-cockpit with the passenger’s comfort and involvement in front of mind. The passenger display found in previous models has been updated to feature music and navigation—Ferrari’s digital version of handing over the aux cord, if you will. As a final party trick, the shift quadrant for the gearbox is styled like a classic open-gate manual, a redesign of the one seen in the SP90 Stradale and a nod to those GTs of the past, resulting in a subtle reminder of the bloodline of the machines which have led to this point. 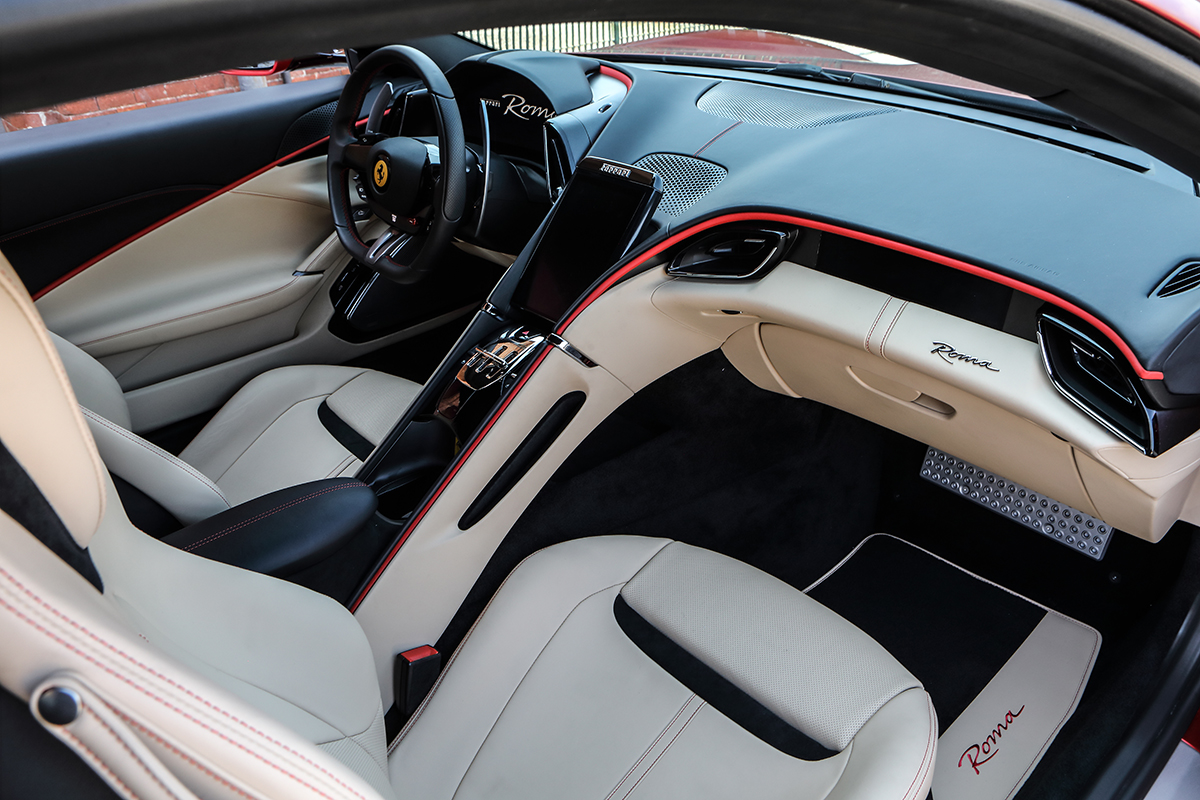 If you’re one of the many people surveying the state of the world right now and thinking of investing in toys over holiday flights, the Roma’s versatility, future nostalgia and sheer beauty make it a tempting purchase. What’s clear is that Ferrari has set its aim at customers of Jaguar, Aston Martin, Bentley and Porsche—makers of cars known for timeless refinement. And if this car tells us anything about what the Prancing Horse has up its tailored sleeves, Italian elegance has returned. From $409,888  plus ORC, with first deliveries starting at the end of Q1 2021; ferrari.com