W.O. Bentley, founder of the eponymous 102-year-old automaker, once proclaimed, “I have always wanted to produce a dead silent 100mph (160km/h) car, and now I think that we have done it.” He was referring to the gas-combusting 1930 Bentley 8 Litre model, but, 92 years later, the comment has become more prescient with the badge’s new 394kW Bentley Flying Spur Hybrid.

The move to hybridisation—and, soon, zero-emission vehicles only—is part of Bentley’s “Beyond 100” plan announced in 2020, which mandates a complete discontinuation of the internal combustion engine (ICE) over the next eight years. The second model in the lineup to go plug-in following the Bentayga Hybrid, this Flying Spur heralds from a prestigious lineage that began in the 1950s with the Mulliner-dressed S1 Continental Flying Spur that was initially powered by a 4.9-litre straight-six engine. Subsequent iterations carried a V-8 powerplant until production ended in 1965. But with the new century came a new lease on life, with the moniker reborn in 2005 attached to a W-12 engine and, later, completely revised for the 2019 model year. 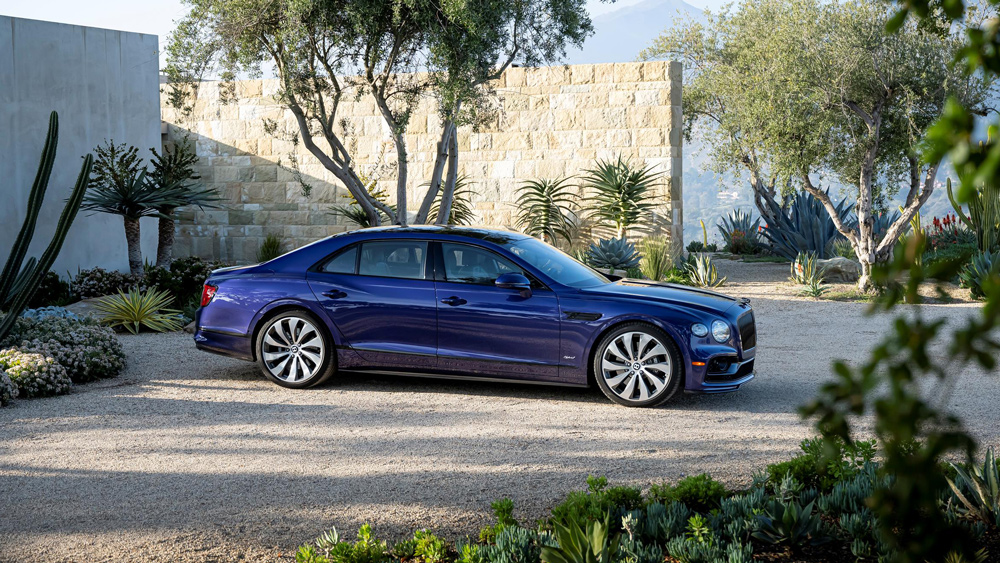 This hybrid is pivotal for Bentley’s future direction. Pulling away from the Peninsula Beverly Hills, in Los Angeles, I was curious how a battery-enhanced Flying Spur, decked in lustrous Azure Purple garb, measures up to a direct competitor like the redesigned Rolls-Royce Ghost or even the less-expensive Mercedes-Benz S-Class. Most importantly, would there be a sacrifice in performance when compared to Bentley’s own ICE-powered lineup? 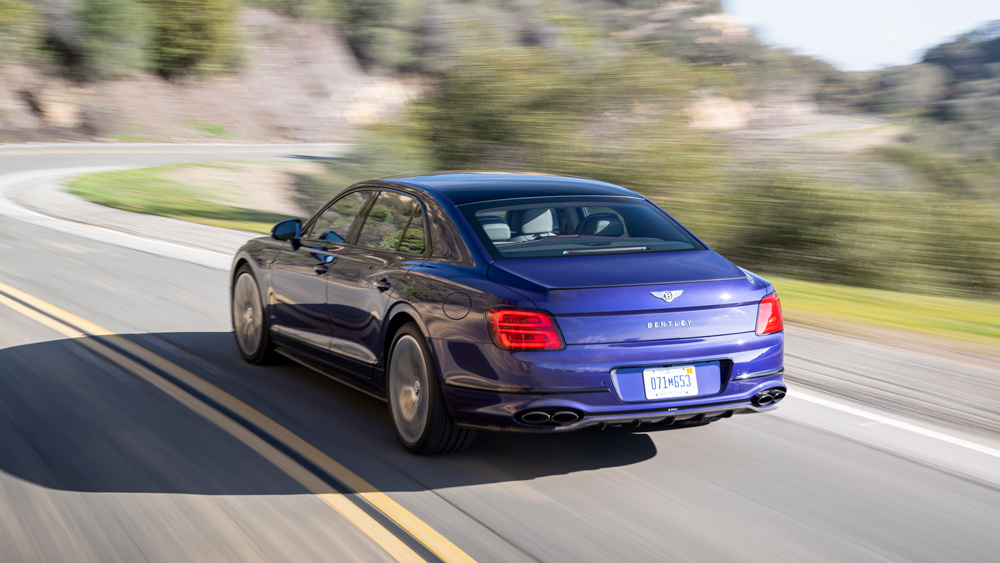 With its fully charged 1.4 kWh lithium-ion battery and a tank of fuel, the car has nearly a 700km range. Photo by James Lipman, courtesy of Bentley Motors Limited.

Navigating through the City of Angels and onto the 101 Freeway, the Flying Spur nimbly danced between the three E Modes, or battery-management settings, including EV Drive, Hybrid Mode and Hold Mode. During urban sections, EV Drive emphasizes the 98kW electric motor (juiced by a 1.4 kWh lithium-ion battery) while the Hybrid selection also includes the V-6 for extended travel, though I couldn’t sort which was at work when; it’s only in Hold Mode, designed to conserve battery charge, that the 2.9-litre V-6 is clearly dominant. In all, the hybrid configuration is claimed to be good for a nearly 700km range. 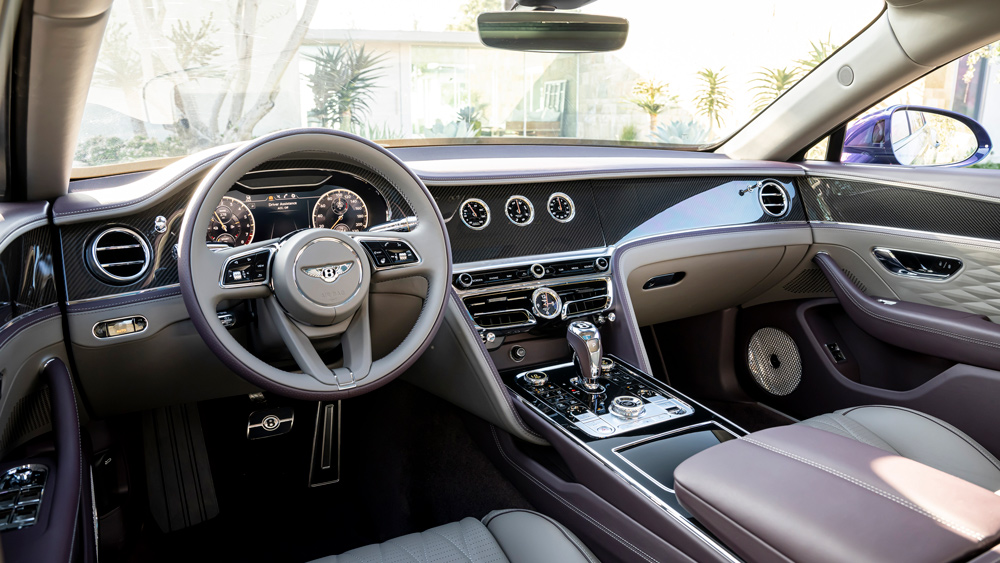 But why a V-6? I posed the question to Steve Jones, Bentley’s chief technical engineer for the Continental GT, GTC and Flying Spur. His response was diplomatic, saying that “the only available power train for that particular car is the V-6 PZEV engine” without mentioning that Volkswagen Group stablemate Porsche also utilizes a 2.9-liter twin-turbo V-6 in its Macan model line. Jones, however, was candid describing the greatest challenge for this model variant: “Our customers expect effortless power delivery, and of course that’s easy to do with a W-12 engine that’s capable of 650 bhp (478kW) and 950Nm of torque.” So while “the V-6 is obviously a much lower power derivative,” he adds that “by combining it with the e-motor [the engine] can deliver an equivalent power output as that of our current V-8.” 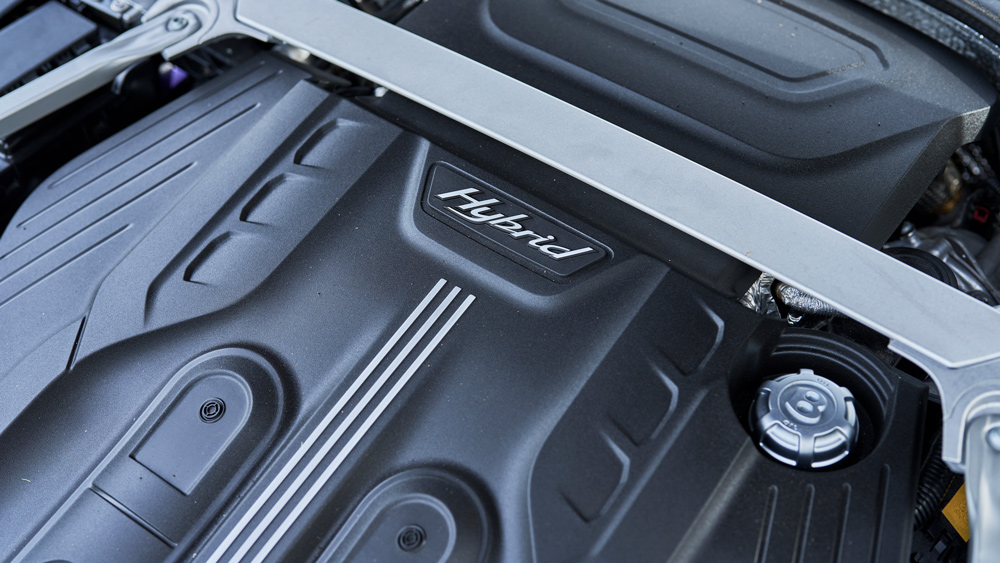 The 2.9-litre V-6 and electric motor combine for 394kW and 750Nm of torque. Photo by Kelly Serfoss, courtesy of Bentley Motors Limited.

Tracing circuitous State Route 150 around Lake Casitas to Ojai, just south of Santa Barbara, I switch from Bentley mode, the comfort setting, to Sport, briefly hammering the throttle to tap into the 750Nm of torque. I’m met with acceleration akin to a winded sprinter straining for the finish line, the engine seeming to grasp for a next gear that just wasn’t quite there, an apt description of the overall performance, at least compared to Bentley’s own athletic Continental, or competitors such as the Rolls-Royce Black Badge Ghost. 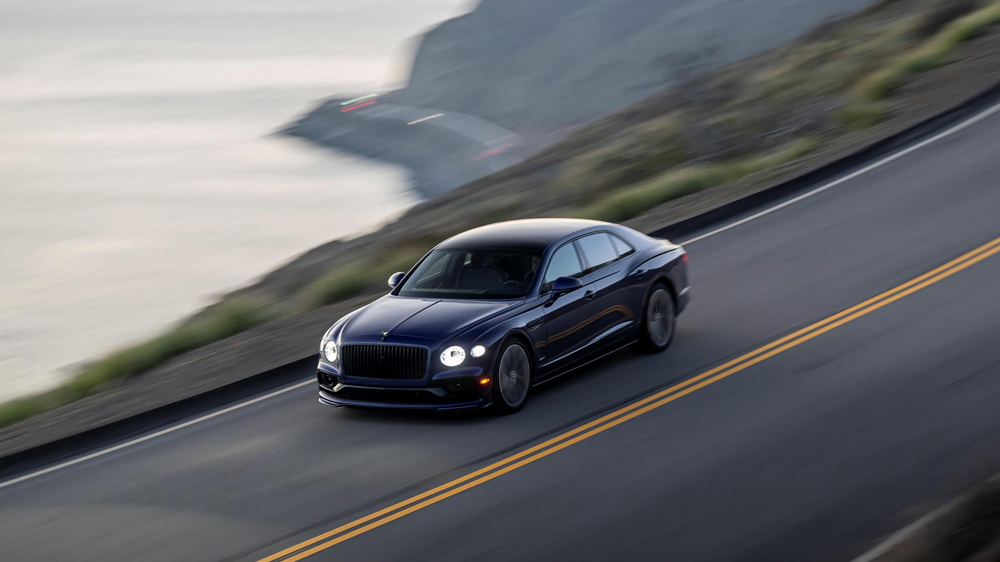 On the turns, the 2505kg all-wheel-drive four-door doesn’t hide its heft as much as expected, and I found that the benefit of all-wheel steering was less apparent than in, say, an S-Class. Still, the machine covers zero to 97km/h in 4.1 seconds and tops out at 284km/h —certainly no slouch in the spec department. And the chassis benefits from double-wishbone suspension at the front and a multi-link setup at the rear, along with three-chamber air springs that are claimed to provide 60 per cent more volume than before. Its prodigious stopping power is owed to what Bentley touts as “the largest iron brakes in the world,” at 16.5 inches in diameter. Yet despite the significant engineering feats, the Flying Spur Hybrid simply lacks enough muscle for its mass. The impressive shape seems rife with athletic potential, but the large hybrid sedan simply hasn’t fully come into its own yet in terms of performance. 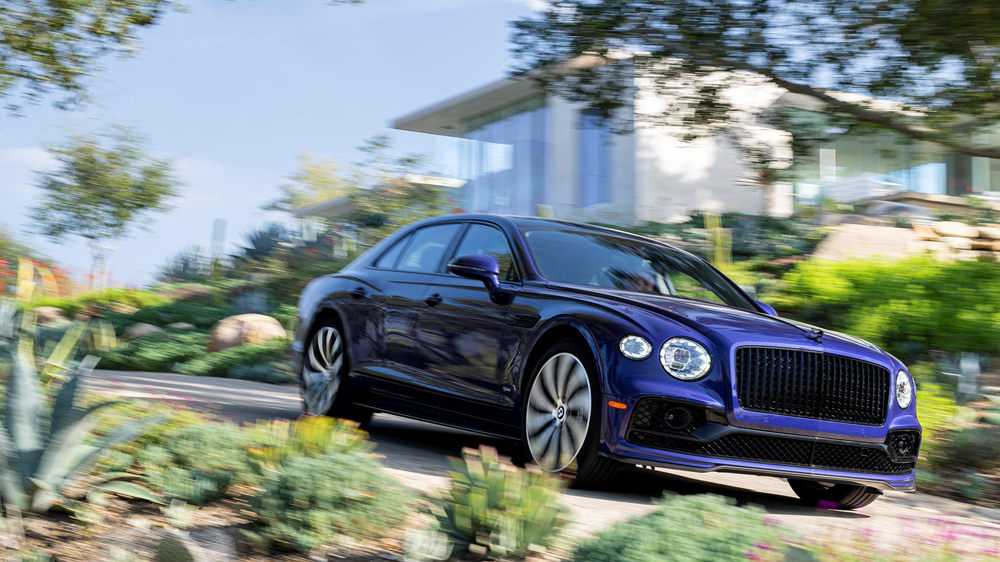 The all-wheel-drive four-door has a curb weight of 2505kg. Photo by James Lipman, courtesy of Bentley Motors Limited.

But when it comes to aesthetics, the model certainly belongs in the winner’s circle. The wheelbase’s 5.11-inch extension, along with our example’s optional 22-inch, Mulliner-spec wheels added to the gravitas of both the silhouette and stance, as does the newly illuminated Flying B hood ornament. But, as expected, it’s the Flying Spur’s interior that truly charges the senses. From unseen details like the knurled surface treatment behind the door handles to the innovative rotating dashboard display to the 3-D diamond-quilted door and panel inserts, the hybrid still has it all in the high-touch style department. 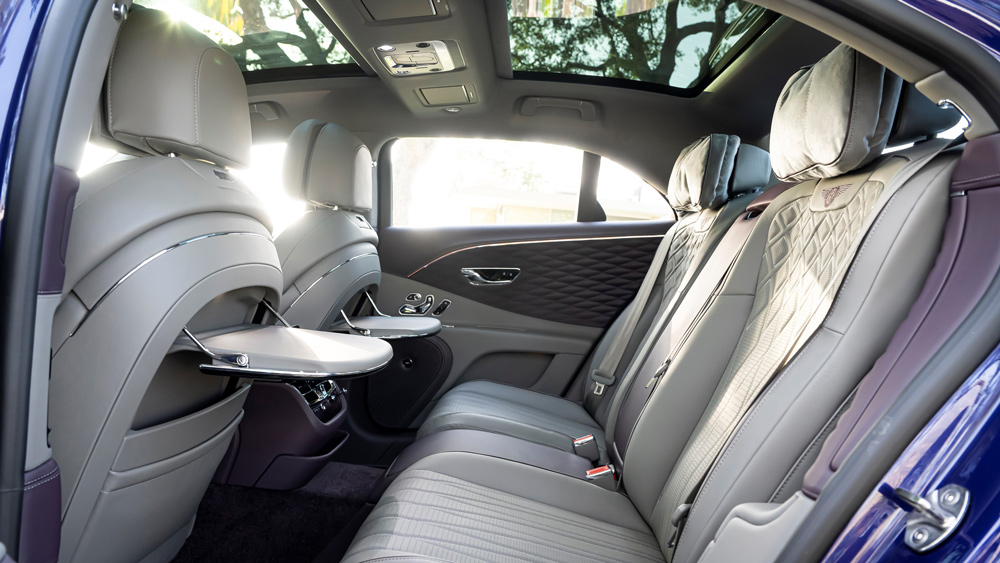 Our Azure Purple example’s inner sanctum is defined by Damson and Porpoise leather as well as 3-D diamond-quilted upholstery and panelling. Photo by James Lipman, courtesy of Bentley Motors Limited.

“Hybrid in America, for Bentley, is obviously quite new,” says Christophe Georges, president and CEO of Bentley Americas. “[Customers] need to try it, to test it, and then we will be able to assess what will be the share. But if you look at the overall market for hybrid, it has developed considerably last year in America, so we should see the same kind of development happen with us.” Though, in a pragmatic nod, he concedes that “maybe it’s not the same proportions, but we’ll see.” 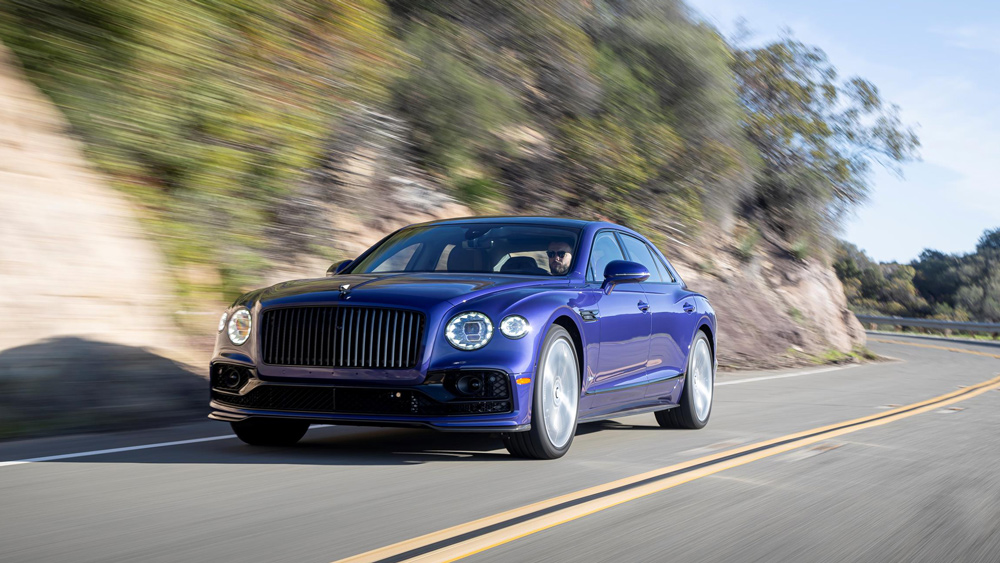 Pricing for the model variant has yet to be confirmed in Australia. Photo by James Lipman, courtesy of Bentley Motors Limited.

These are reasonable expectations for a new hybrid model, and only Bentley’s second attempt at the form. The Flying Spur Hybrid, while offering as baronial a passenger experience as any Bentley, is a beautifully appointed stopgap, yet it also represents for the brand a vitally necessary step toward the most significant transformation in automotive history.