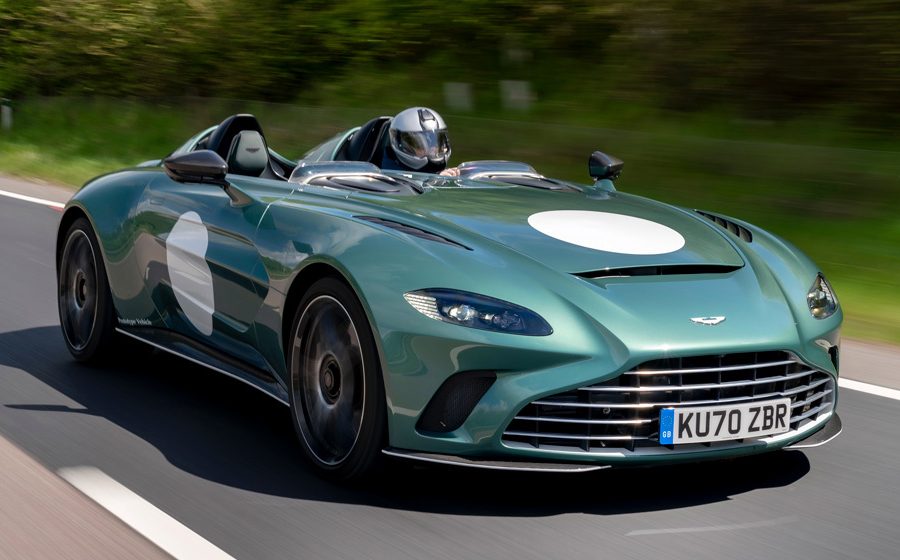 The speedster gives a whole new meaning to the phrase “bad hair day.”

Aston Martin’s V12 Speedster is, quite literally, breathtaking. Hurtling across the English countryside, I’m just glad for the full-face safety helmet I crammed in my travel bag before leaving home. Without it, I’d be gasping for breath in between the giggles and guffaws as this 300km/h supercar scrabbles for grip on rain-soaked asphalt. As well as leaving off the roof, Aston has firmly grasped the “less-is-more” mantra for the Speedster and left off the windscreen as well. Yes, just like the Ferrari Monza and McLaren Elva, this Aston Martin example is untroubled by glass. Without it, arriving anywhere after an enthusiastic drive should add a whole new meaning to the term “bad hair day.”

Minimalist supercars are all the rage at the moment, so it’s a surprise that some of the 88 examples of the V12 Speedster being built are still available to buy. The approx. $1,054,000 price could dampen enthusiasm, especially when a DBS Superleggera Volante, with the same 5.2-litre V-12 engine, is less than half the cost. And in Australia, the Speedster’s outrageous design means it can only be enjoyed on a racetrack. 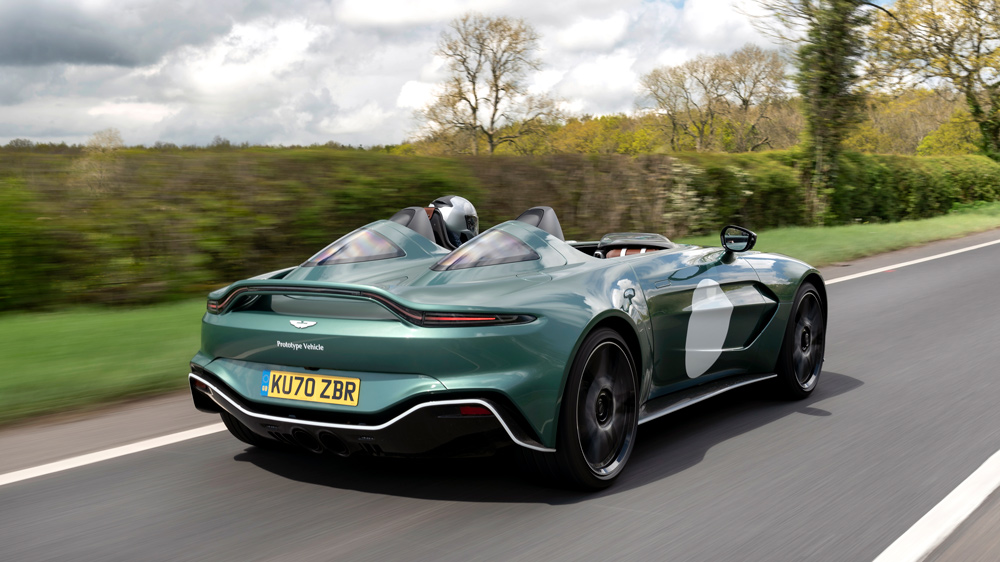 Set low in the cabin, the trim is a predictable mix of lightweight materials and leather, with some familiar Aston Martin switchgear to boot. The most obvious addition is the carbon-fibre blade, running fore and aft between the two seats, at neck height. It’s a cool slice of bodywork design, but drivers will probably curse the impact between helmet and carbon fibre while reaching down for the heating controls. And with 521kW coursing through an eight-speed automatic gearbox—slightly less than the Superleggera—there’s plenty of opportunities to chip the lacquer.

The backside warmers in the wafer-thin carbon fibre seats and a heated steering wheel are optional, although most other luxuries have been stripped out to save weight. At least the powerful air heater is preventing my fingers from numbness. 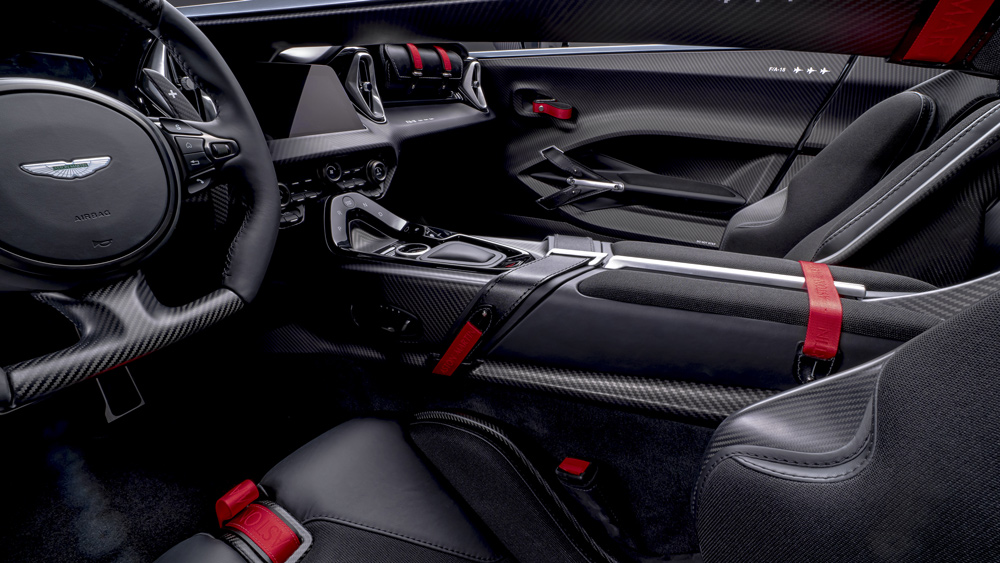 The interior trim is a predictable mix of lightweight materials and leather, with some familiar Aston Martin switchgear to boot. Photo: Courtesy of Aston Martin Lagonda.

This particular Speedster is a cut above the rest because it has been fitted out in DBR1 specification, around an extra $90,000 odd. The Racing Green paintwork and flashy, anodized grille pay tribute to the iconic Aston that won both the 24 Hours of Le Mans and the Nürburgring 24 Hours races in 1959.

Interestingly, and of no surprise, the V12 Speedster was seemingly influenced by a fighter jet. The marque has collaborated with Boeing in the past to create a bespoke aircraft interior and couldn’t resist adding some Top Gun–style bling on some versions. 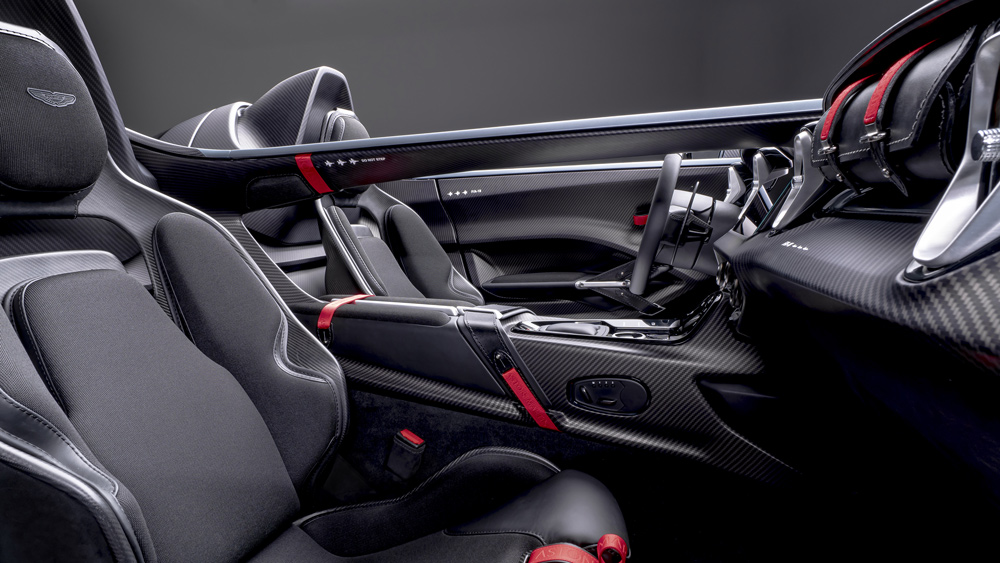 The cockpit in those select cars features Boeing F/A 18 Super Hornet decals and a “Do Not Step” warning sticker underneath the central dividing blade, which all seems rather unnecessary.

Creature comforts for longer journeys are few, just in case owners plan to dodge the showers and head off for the weekend. The modest trunk space is complemented by an ingenious, removable leather bag, which replaces a conventional glove box on the dashboard. 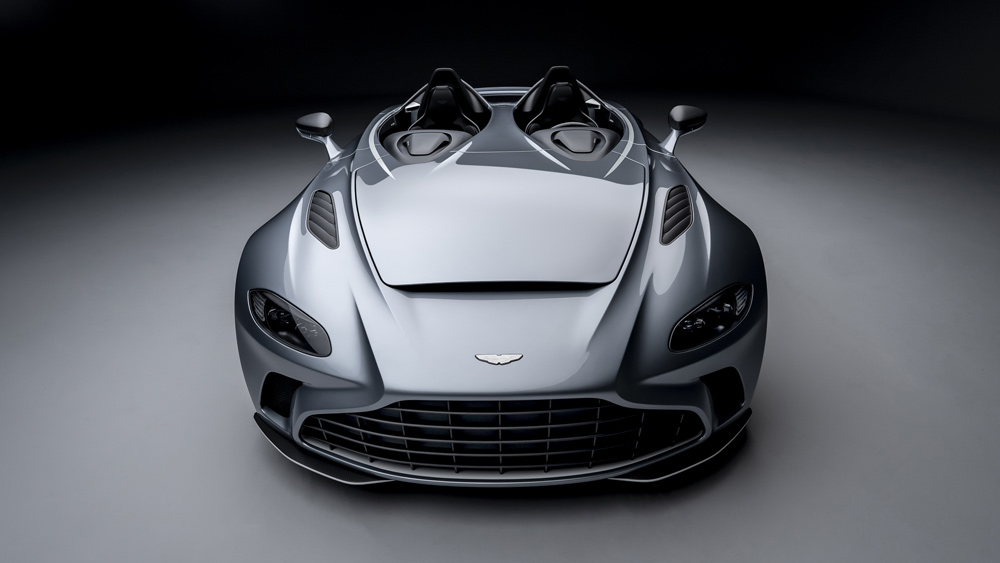 How appealing the V12 Speedster is to potential buyers might depend on where they live. In Britain, I’d be constantly monitoring the weather app on my phone before heading out. For those in sunnier climes, this Aston Martin could be the ultimate, wind-in-the-hair driving experience.