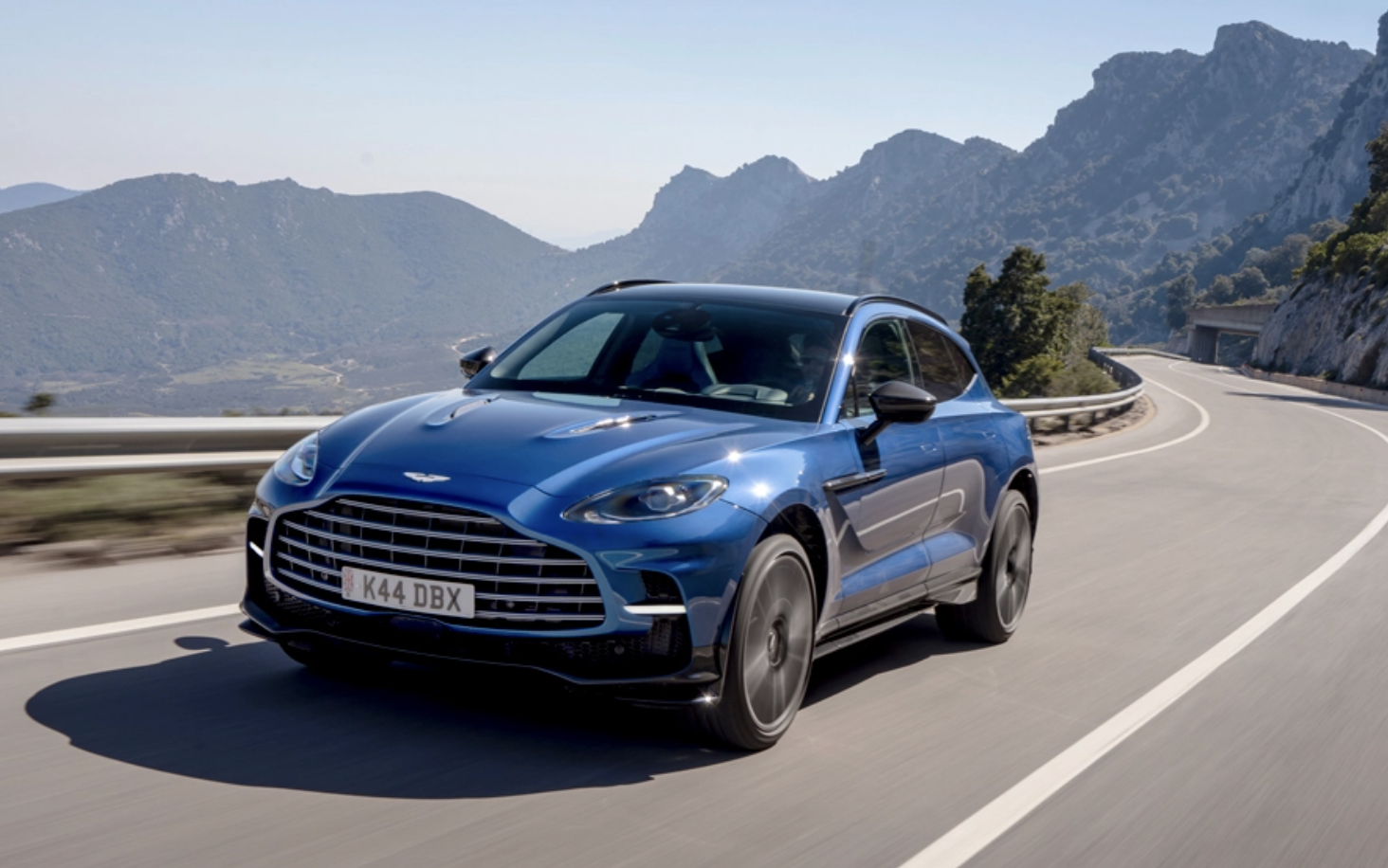 The British marque’s latest could take the super SUV crown.

There’s a riveting battle for supremacy in the luxury high-performance SUV segment, and it appears that a formidable newcomer is determined to rise above the exceptional offerings from Lamborghini, Porsche and Bentley to take the throne. That striking competitor is the 2023 Aston Martin DBX707.

Aston Martin is a late entrant to the SUV realm, yet it’s committed to domination. Fewer than two years ago, the company introduced the DBX. All-new at the time, the model was built on a dedicated platform of lightweight alloy extrusions with bonded aluminium panels and earned near-immediate acclaim for its impressive performance and strong driving dynamics. Now, the marque has introduced an even higher-performing variant engineered to be “the fastest, most powerful, best handling and most engaging car of its kind,” according to Tobias Moers, Aston Martin’s now outgoing CEO. 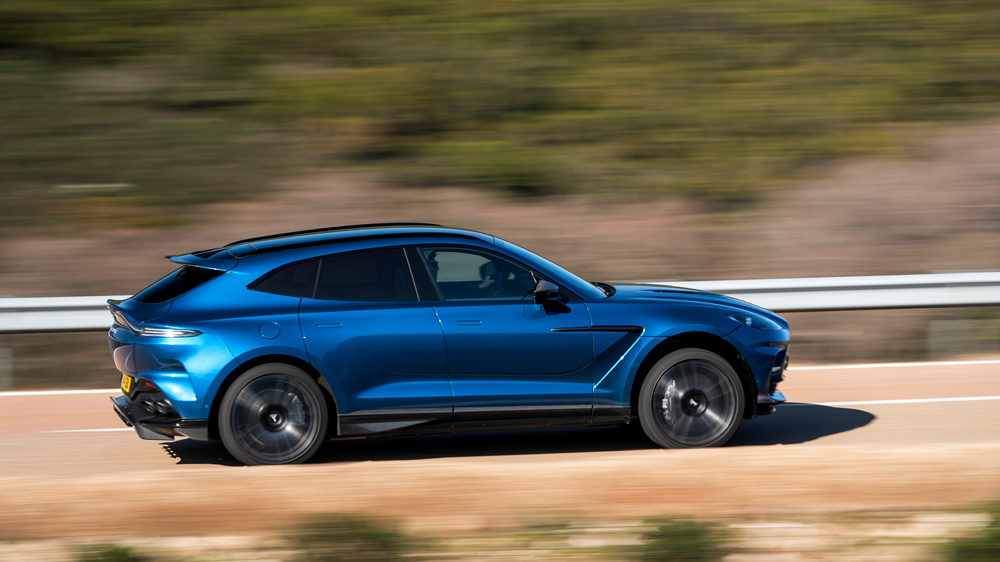 The standard DBX brings a twin-turbocharged 4.0-litre V-8 tuned to an impressive 404kW and 700Nm of torque. Strong, but not awe-inspiring. Determined to realize the engine’s full potential, Aston Martin engineers fitted upgraded ball-bearing turbochargers and bespoke engine calibration to deliver 520kW and 900Nm of torque. The power increase necessitated a new nine-speed “wet clutch” automatic transmission that could handle the torque without compromising smoothness. In addition, the engineers improved acceleration responsiveness with a shorter final drive ratio, and the electronic limited-slip rear differential was strengthened (torque distribution remains fully automatic, with the electronic system able to send up to 100 per cent of the engine’s torque to the rear wheels).

Balancing the power increase is a significant upgrade in braking performance in the form of standard carbon-ceramic brakes (420 mm front and 390 mm rear). The colossal rotors, clamped by six-piston calipers in the nose, absorb significantly more heat and are 89 pounds lighter than their steel equivalents. In addition, high-performance brake pads and improved brake ducting further enhance the vehicle’s stopping power, as do the 22-inch alloy wheels (23-inch wheels are optional) wrapped in summer compound Pirelli P-Zero tyres (285/40-22 front, 325/35-22 rear). 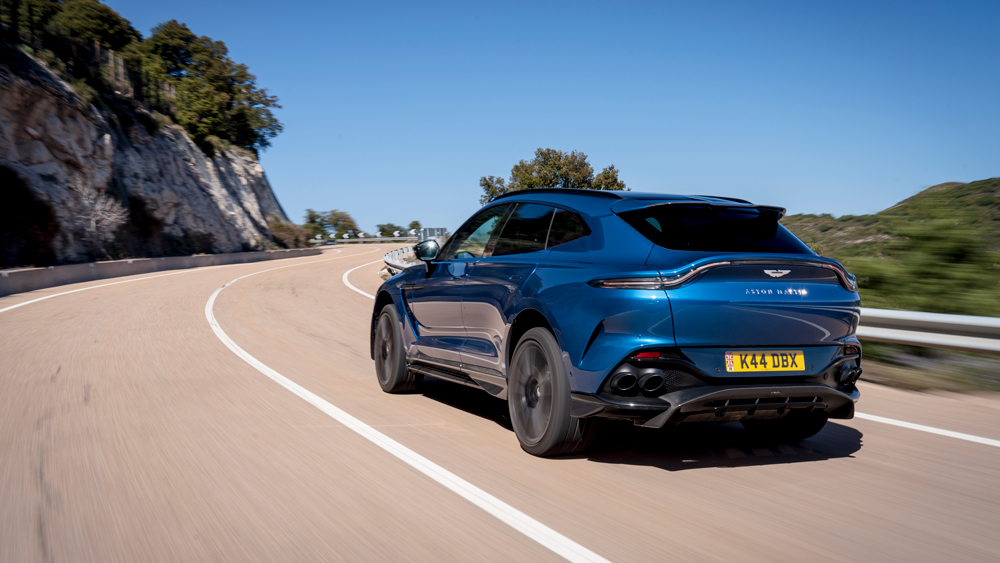 Output from the SUV’s twin-turbocharged 4.0-litre V-8 is 520kW and 900Nm of torque. Dominic Fraser, courtesy of Aston Martin Lagonda

The sleek body of the standard DBX is already a head-turner. Yet, Aston Martin was required to make physical modifications to the exterior of the DBX707 to increase airflow for cooling and improve aerodynamic stability at greater velocities. As a result, the front of the SUV features a more prominent grille (distinguished by its double-vane slats), as well as new air intakes and brake cooling ducts, while a new lower front splitter improves stability. However, the most dramatic exterior alterations are found at the rear. In addition to new quad exhaust pipes, Aston has fit a new lip spoiler on the upper wing and bolted on a substantial lower rear diffuser, both sculpted and channelled, that extends beyond the exhaust pipes.

Aston hasn’t left the luxurious passenger cabin untouched. Supportive 16-way sport seats are standard fitment in the DBX707 (comfort seats are a no-cost option), and buyers are offered a trio of choices for interior themes (Accelerate, Comfort and Inspire Sport) that define various upholsteries and premium leather hides. The bright trim inside the vehicle is replaced with a dark chrome finish, and customers may choose between several veneers. As is customary, the most discerning buyers will choose to configure their Aston Martin through Q—the brand’s customization division. 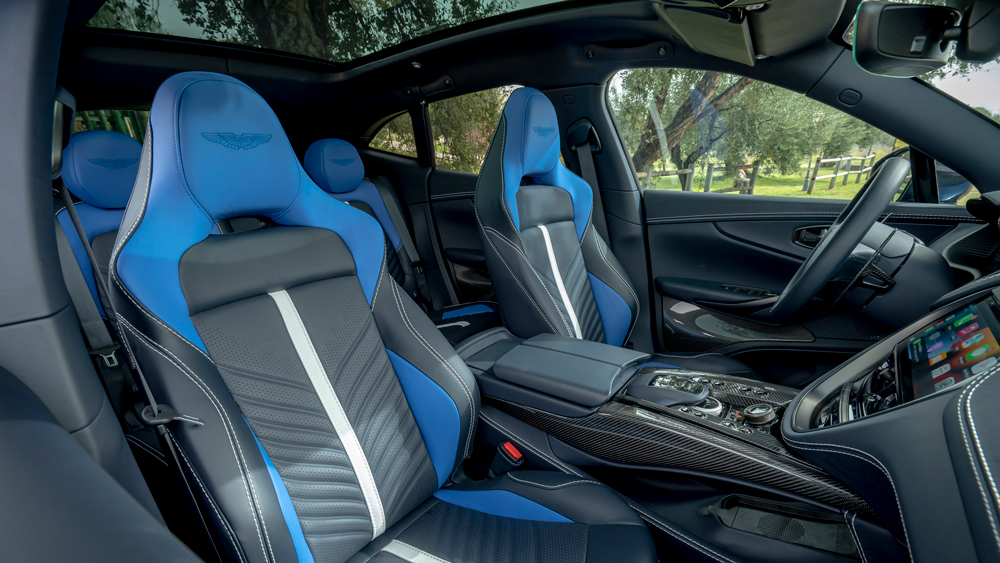 We sampled the new Aston Martin on the Mediterranean island of Sardinia, where we were able to wring out the five-passenger SUV on the island’s pristine mountain roads. To our surprise, the picturesque Italian venue was overshadowed by the impressive DBX707. The standard DBX is an exemplary vehicle, yet its new sibling elevates every performance parameter to the next level. While the DBX rockets from zero to 97km/h in 4.0 seconds, the DBX707 shaves a full second off that time while top speed is increased from 291km/h to 310km/h. The engine’s thrust pins occupants against their seats, but it does so with a gentleman’s touch—the sound emanating from the exhaust is fierce and angry, however notably less obnoxious than most others, even at its loudest setting.

The most remarkable part about this SUV, though, is that it doesn’t drive like one. All of the range-topping crossovers in this segment feel as if they’ve been disproportionately tuned to mask their enormous size and mass. In notable contrast, the DBX707 excels because it drives with a balance and effortlessness that belies its physical stature. It accelerates with seemingly unlimited power reserves on tap, the brakes effortlessly bleed off speed, the body roll is minimal and its steering feels accurate and natural in weight. When pushed hard, the DBX707 drives like an exotic sports car. 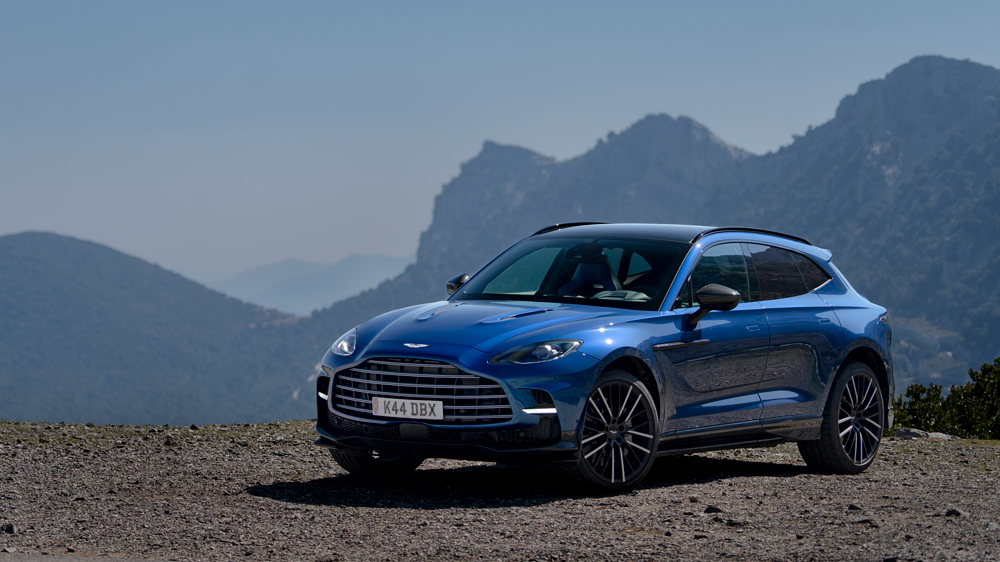 And it doesn’t compromise on its luxury mission thanks to the operator-selected drive modes, which marvellously adjust its personality and demeanour. Attack a twisty canyon road in Sport+ mode, pull off the asphalt to jump a few dunes in Terrain mode and dial it back to GT mode for the long motorway cruise home. When you consider that Aston Martin may have just created the world’s most proficient multi-tool for a consummate driving enthusiast, the DBX707’s $428,400 base price is downright warranted.

Aston Martin has certainly accomplished its objectives. Passers-by will be stopped by the vehicle’s distinctive appearance, and occupants will find the premium interior a pleasing balance of sport, luxury and technology. Nonetheless, the person behind the steering wheel will be most enthralled with the DBX707, as the new category leader is an absolute thrill to drive.