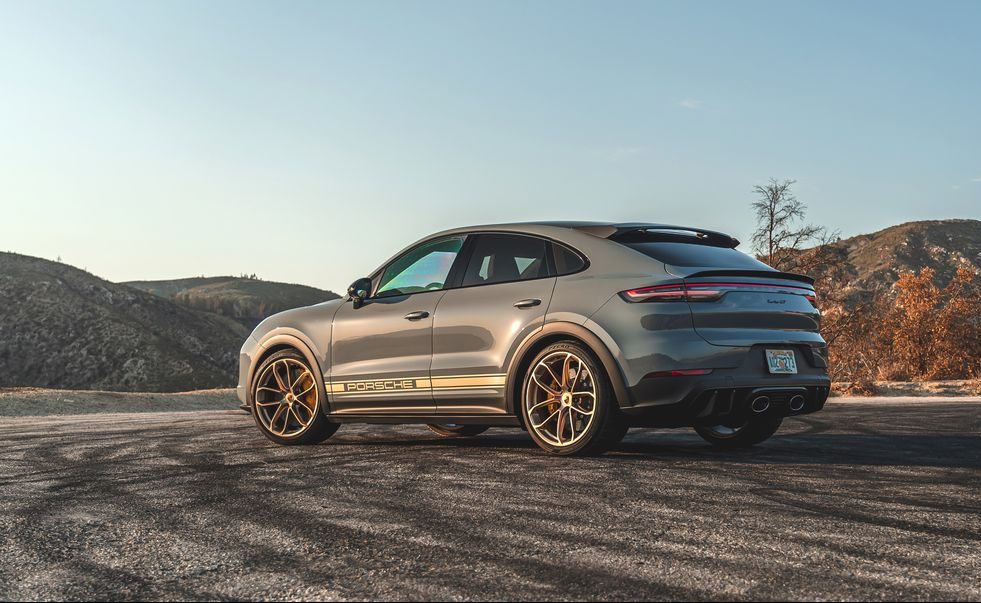 I’ve never been impressed with high-performance SUVs and crossovers. They promise a sports car’s driving experience without compromising passenger space and utility, yet most are nothing more than a more powerful engine and an upgraded wheel-and-tire package splashed with a handful of obligatory cosmetic enhancements to justify a premium window sticker. While they are unquestionably quicker than standard models, and they may circle a highway onramp a bit faster, their synthetic and ungainly driving dynamics don’t raise my enthusiast pulse a single beat.

Therefore, you can imagine my scepticism when Porsche recently announced its new 2022 Cayenne Turbo GT, a range-topping model promising “phenomenal performance with a high degree of utility.” Here we go, again. Or so I thought.

Porsche followed the reveal with an eye-opening proclamation: The Cayenne Turbo GT had set a new official SUV record of 7:38.9 minutes around Germany’s gruelling Nürburgring Nordschleife circuit. Not only is that time faster than the benchmark Lamborghini Urus SUV, but the new Porsche crossover crossed the track’s finish line tied with the celebrated Ferrari 458 Italia and Lexus LFA sports cars. Okay, hand me the keys.

The Cayenne Turbo GT, which is only available in the sloped-roof coupe body style, is visually differentiated from its standard brethren by its GT-specific front fascia—designed to allow increased air into the engine, radiators and intercoolers—and more aggressive front lip splitter. A contoured carbon fibre roof reduces weight and lowers the centre of gravity, while black fender arches contain the wider track and unique 22-inch GT Design wheels.

At the rear, the upper decklid wing is complemented by side plates in carbon fibre, and the adaptive rear spoiler has been fitted with a sizeable Gurney flap to reduce both drag and lift. To improve exhaust airflow and the vehicle’s soundtrack, Porsche deleted the Cayenne’s centre muffler and swapped the heavy steel system for one crafted in titanium alloy, thus saving about 40 pounds of mass. Set just below the rear bumper is a pair of oval exhaust tips with notched anodized blue liners that mimic the afterburner outlets of a fighter jet. 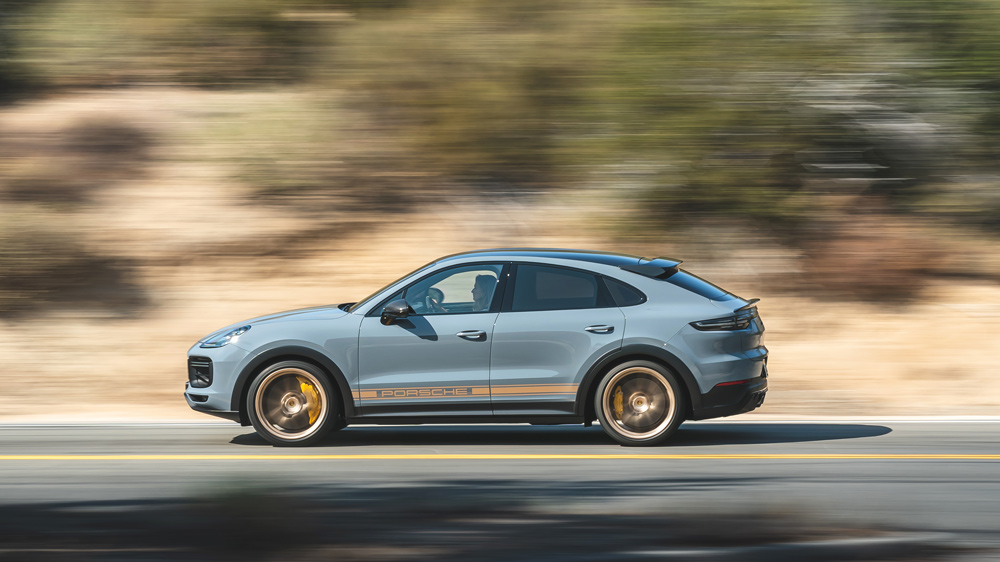 The Cayenne Turbo GT is only available in the sloped-roof coupe body style. Photo: Courtesy of Porsche AG.

The standard four-place cabin is configured with spirited driving in mind. The eight-way Sport Seats with embossed “Turbo-GT” in the seatbacks are upholstered in leather and Alcantara, and the driver faces a thick, multifunction sport steering wheel with a racy yellow 12 o’clock centre marker. The Turbo GT also introduces the next generation of Porsche Communication Management (PCM) infotainment to the Cayenne lineup, which is now compatible with both Apple CarPlay and Android Auto.

As expected, the Cayenne Turbo GT has been tuned to deliver prodigious amounts of power. Its twin-turbocharged 4.0-litre V-8 is shared with the standard Cayenne Turbo model in the most basic sense, but the engine in the Turbo GT has been heavily modified to develop appreciably more power with new pistons, connecting rods, timing chain, torsional dampers and a unique crankshaft.

Power output jumps to 471kW and 850Nm of torque—that’s 67kW and 80Nm more torque than the Turbo Coupe. Porsche’s own conservative numbers claim that the launch from zero to 100km/h takes just 3.3 seconds. Hold the accelerator to the floor and the Turbo GT tops out at 300km/h, making it the quickest and fastest production Cayenne the automaker has ever offered.

To put the power to the ground, Porsche fits the Turbo GT with proper footwear. The wide wheels are wrapped in track-ready Pirelli P-Zero Corsa tires specifically engineered for the mission (with “Treadwear 80” ratings, owners should expect to replace these tires more frequently than the engine’s oil). Alignment settings are aggressively configured for the track to ensure that the sticky contact patches are optimized for lateral grip and stability.

Technology is a noteworthy part of the model variant’s performance equation, so the marque has equipped the vehicle with every active system in its comprehensive arsenal. These include Porsche Active Stability Management (PASM), the Porsche Dynamic Chassis Control (PDCC) adaptive roll compensation system, Porsche Torque Vectoring Plus (PTV+), Power steering Plus and rear-axle steering. And all these components have been specifically calibrated and adapted to raise cornering speeds, increase lateral grip and enhance stability.

The Turbo GT’s V8 engine fires to life with an eager snarl before settling down to a tempered growl. Drive with a lackadaisical right foot and the crossover is docile and well-tempered. But mash the accelerator and passengers had better be hanging on as the powerful Porsche launches like an irate Grizzly. 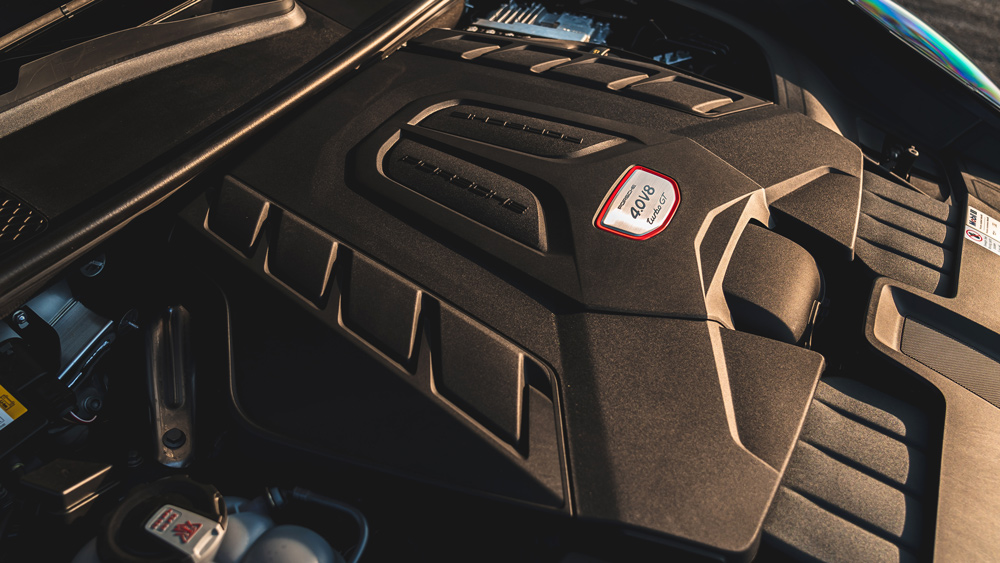 The exhaust note is unquestionably angrier than the standard Turbo model, but the Cayenne’s insulated cabin means the audio track is best enjoyed by those outside the vehicle, as they can hear the twin centre pipes truly roar. (Unlike most other automakers, Porsche does not augment or pipe artificial exhaust notes through the speakers—the combustion melody is completely genuine.)

In the “O” (or normal) configuration, as dialled on the steering wheel-mounted drive mode selector, the Turbo GT is surprisingly unassuming, accommodating and extremely comfortable— despite its race-tuned underpinnings. The standard three-chamber air suspension absorbs pavement cracks, bumps and potholes effortlessly, and the eight-speed Tiptronic S automatic transmission is silky smooth as the Cayenne runs up and down through its gears. Despite some annoying traffic, my 40-minute trek across the Los Angeles Basin was peaceful and relaxing. 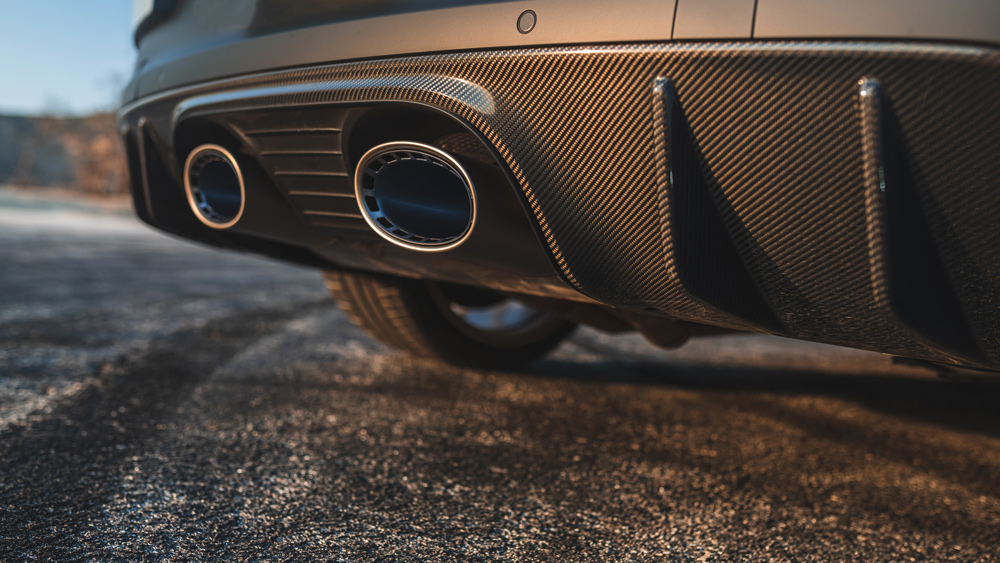 Spin the dial to “S” (Sport) or “S+” (Sport Plus) to reconfigure the Turbo GT into progressively more aggressive driving modes. In those settings, the vehicle makes dozens of system adjustments, but the most obvious from the driver’s seat is the more pronounced exhaust note, livelier throttle response and fervent transmission. In these modes, however, it’s no surprise that fuel efficiency has left the conversation.

In this configuration, the Cayenne Turbo GT is a take-no-prisoners precision driving instrument that appears to have forgotten that it weighs 2260kg.

High-performance SUVs and crossovers typically exhibit increasing understeer as they reach the limit of their capability, which leaves the driver holding onto a lifeless steering wheel while listening to the outside front tire wail as its rubber tread is scrubbed off by the abrasive pavement. But that doesn’t happen in the Turbo GT. 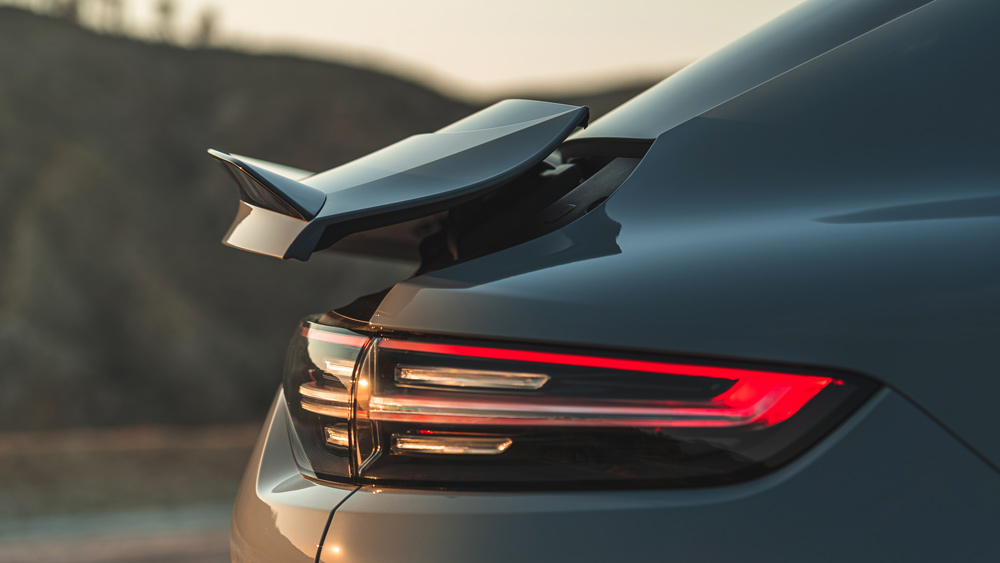 The adaptive rear spoiler has been fitted with a sizeable Gurney flap to reduce both drag and lift. Photo: Courtesy of Porsche AG.

The vehicle feels perfectly balanced, front to rear, and its aggressive alignment—nearly 1.5 degrees of negative camber—plants the tyres’ contact patches perfectly on the road surface while the sticky rubber adheres tenaciously to the aggregate. During my drive, the vehicle’s performance computers measured cornering forces exceeding 1.2 g laterally in both directions. Those numbers are strong enough to challenge the world’s most capable sports cars.

Powering out of the corners, the Cayenne’s fully variable Porsche Traction Management (PTM) all-wheel drive expertly delivers the horsepower to where it may best be used. There is no loss of traction and not an inch of tyre slippage, just neck-snapping thrust as the four tyres pull the crossover towards the next bend. Those with sensitive derrières will notice how the rear-axle steer and torque vectoring—both assisting automatically—seamlessly work their wizardry to keep the vehicle’s trajectory perfectly on the intended line. 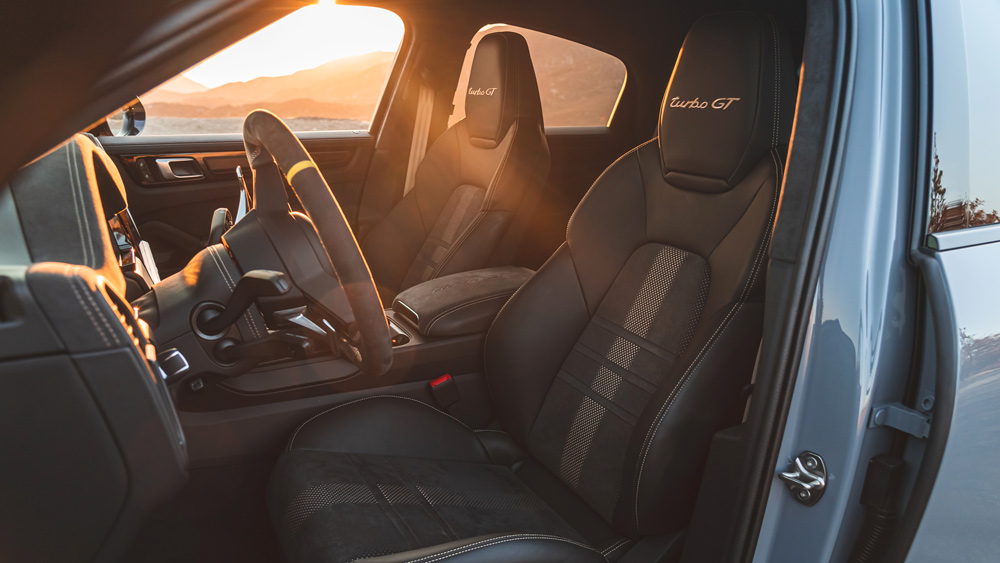 Embossed with “Turbo-GT” in the seatbacks, the eight-way Sport Seats are upholstered in leather and Alcantara. Photo: Courtesy of Porsche AG.

The Cayenne Turbo GT is taller than all sports cars, which affords a more commanding view of the road, but cornering is perfectly flat thanks to Porsche 4D Chassis Control and the 48-volt electromechanical roll stabilisation. And braking from speed is unproblematic and fade-free as the Turbo GT is fitted with Porsche Ceramic Composite Brakes (PCCB) as standard fitment. It stops as well as it goes, which is also very uncharacteristic of a crossover.

My astonishment at the Cayenne Turbo GT’s performance and the enjoyment I was feeling invigorated me enough to make several runs up and down the mountain. By mid-afternoon, I had concluded that the Turbo GT isn’t just faster and more capable than every other crossover on the market, it’s better than most purpose-built sports cars, too. 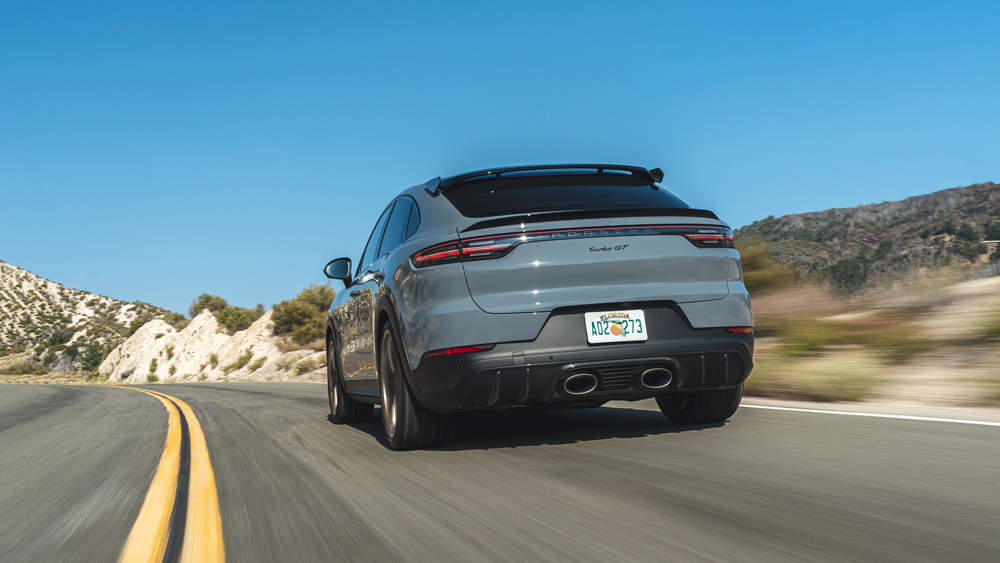 Porsche claims the new Cayenne Turbo GT can cover zero to 100km/h in 3.3 seconds while on its way to 300km/h. Photo: Courtesy of Porsche AG.

I’ll be the first to point out that the 2022 Porsche Cayenne Turbo GT is nonsensical overkill for most consumers, yet there is a niche of discriminating drivers who are pursuing unconditional superiority in terms of impeccable engineering, faultless driving dynamics and record-setting performance. For those discerning few, Porsche has decisively delivered excellence. And I’m finally impressed.

The 2022 Porsche Cayenne GT is now available to order in Australia, with prices starting from $336,100 (excluding on-road costs). Porsche Australia expects local deliveries to commence during the fourth quarter of this year.