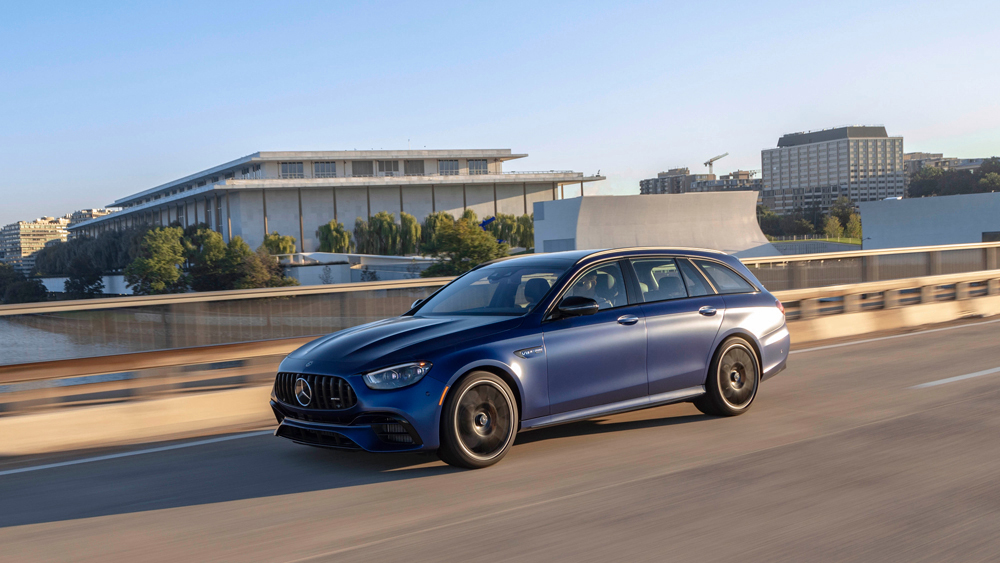 Why settle for an SUV when this shooting brake offers the best of all worlds?

When it comes to German cars, I’ve always been in the Porsche 911 and BMW two-door camp. But there’s one Silver Star that I’ve coveted since I first saw the AMG Hammer in the late 1980s. That car—a station wagon—connects with this writer’s ancient DNA like none other.

One of my earliest automotive memories is my grandfather’s station wagon, a 1961 Ford Country Squire with “wood” panelling. It was a voluminous thing, with a commanding presence and lots of power compared to my old man’s Triumph TR3A. I’ve never admitted how much I liked that fake-wood wagon, until this new Mercedes-AMG jogged my feeble synapses with the realisation that maybe—just maybe—the station wagon is the perfect car. 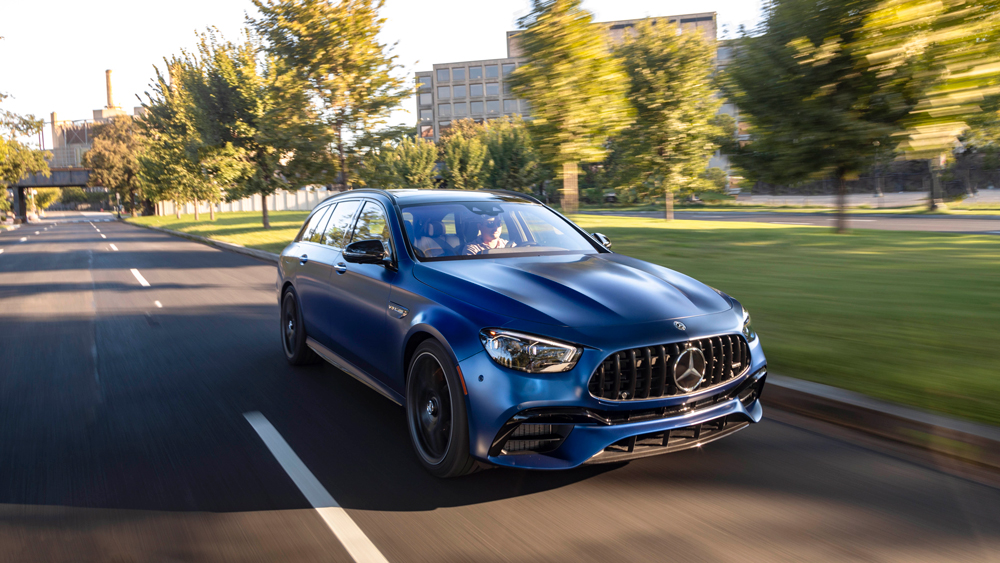 The 2021 Mercedes-AMG E 63 S Wagon is the perfect wagon. SUVs be dammed; the big Benz does everything a towering SUV can do, but does it in an elegant way. Let’s be honest: There’s nothing elegant about an SUV. But a long, sleek station wagon has all the aesthetic appeal of a sports sedan along with the practical utility of a Weber’s Bread van. It’s the reverse mullet of the automotive world; party in the front, business in the back.

Enthusiasts debate all the time about which sports car is the most suitable daily driver. I’ve claimed that a Porsche 911 is ideal, though, granted, I have no offspring that need chauffeuring to soccer practice. On such occasions that the cycads cry out for fertilisation, I must enlist a vehicle more commodious than a two-door coupe to haul bags of soil amendments and the requisite beverages to accompany the ritual. It is in such instances that the Mercedes-AMG E 63 S Wagon recommends itself most heartily.

The E-Series is Mercedes-Benz’s bread and butter, and the 2016 model ushered in the tenth generation, which has been further fettled for 2021. The new wagon is, in essence, the E 63 S with a termite queen’s abdomen grafted behind its mid-section. From the driver’s seat, it feels like the sedan from which it’s derived, with a rear-weight bias that benefits handling dynamics by simply adding more ballast over the rear wheels. From the middle toward the back, and with rear seats folded flat, it’s a utility vehicle, with 1800 litres of capacity to haul sundries. That said, its 4MATIC+ fully variable all-wheel-drive system makes this Mercedes almost unflappable. Traction is constant unless one engages Drift Mode, which turns the 2131-kilogram wagon into a rear-wheel-drive-only toy. 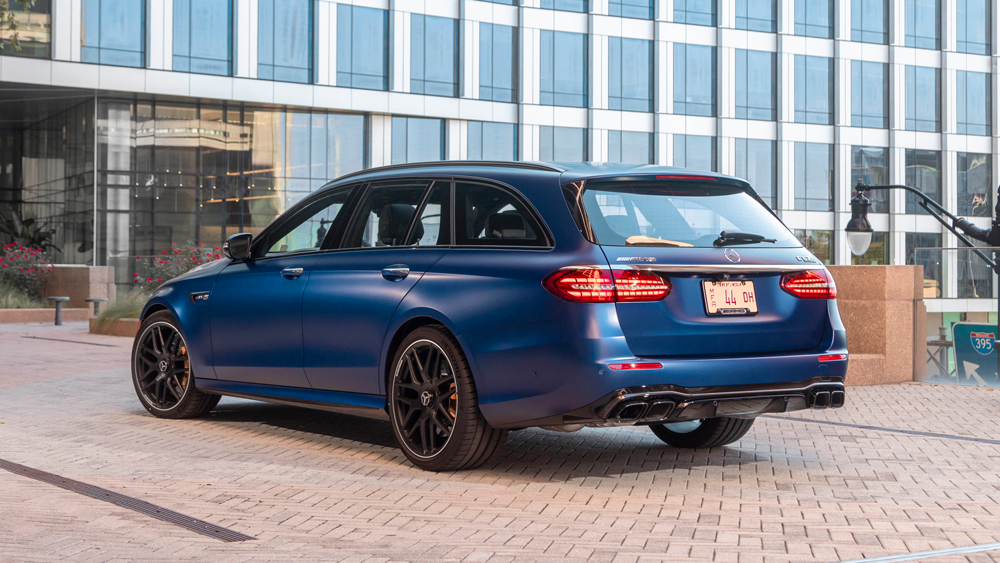 So, let’s talk for three seconds about power. Because that’s the amount of time it takes—at least according to my phone—to reach 100km/h. The official number is 3.4 seconds, but reviewers with heavier feet have reported sub-3-second times. Give or take a few nanoseconds, the Mercedes wagon will keep up with just about any car, while hauling a dozen bags of cycad mix and a few cases of booze.

The guts behind all this bravado is a hand-built, twin-turbocharged, 4.0-litre V-8 engine that makes 450kW and 850Nm of torque from 2,500 rpm. Just call it “Stump Puller.” The engine in our car was made by Martin Joppe, as proclaimed by the tasteful aluminium plaque applied to the engine cover, and which bears the master engine builder’s engraved signature. Think about it for a minute. When was the last time you knew the name of the person who built the engine in your car?

Mr Joppe’s motor is just one aspect of this wagon’s persona that makes it so engaging. The fact is, the power plant is carried over from 2020, but appearance-wise, the 2021 model tips the scales to “Buy it Now.” An entirely new front and rear design—specific to AMG—turns this wagon into a real looker. 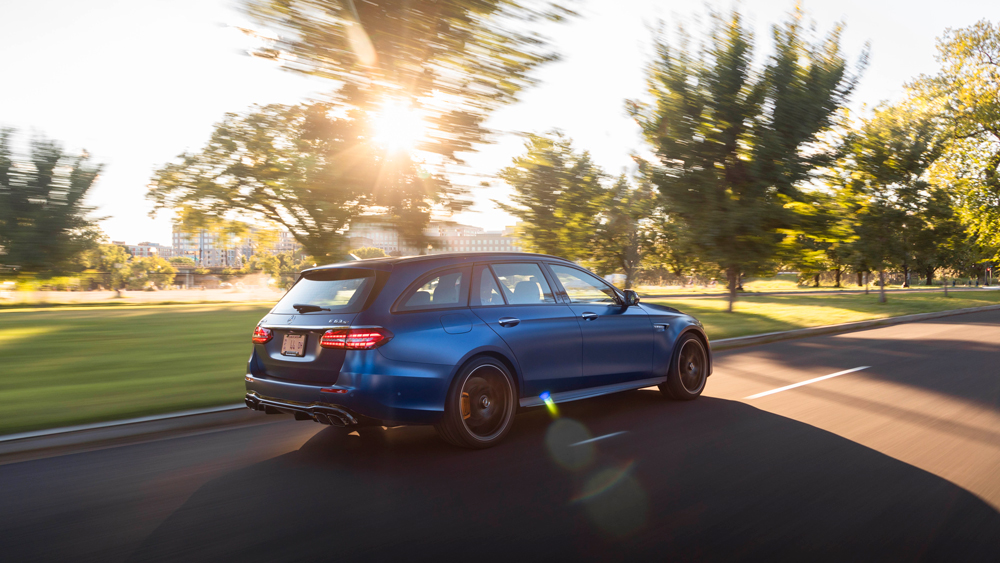 The rounded front end gets a big grille, with vertical slats akin to the AMG GT, set into a new front bumper with what Mercedes calls a “jet-wing” design with three large, functional air intakes and a new front splitter. Redesigned LED headlamps light the way. Bringing up the rear is a new bumper, taillamps and an AMG performance exhaust system.

Our car was liveried in an optional matte paint finish called Brilliant Blue Magno. Eye-searing in the extreme, it seems too hipster, and we’d imagine a more historic Mercedes-Benz hue like Havana Brown or Olive Green to be better in keeping, respectfully tipping a hat to Mercedes’ 300TD station wagons of the past. 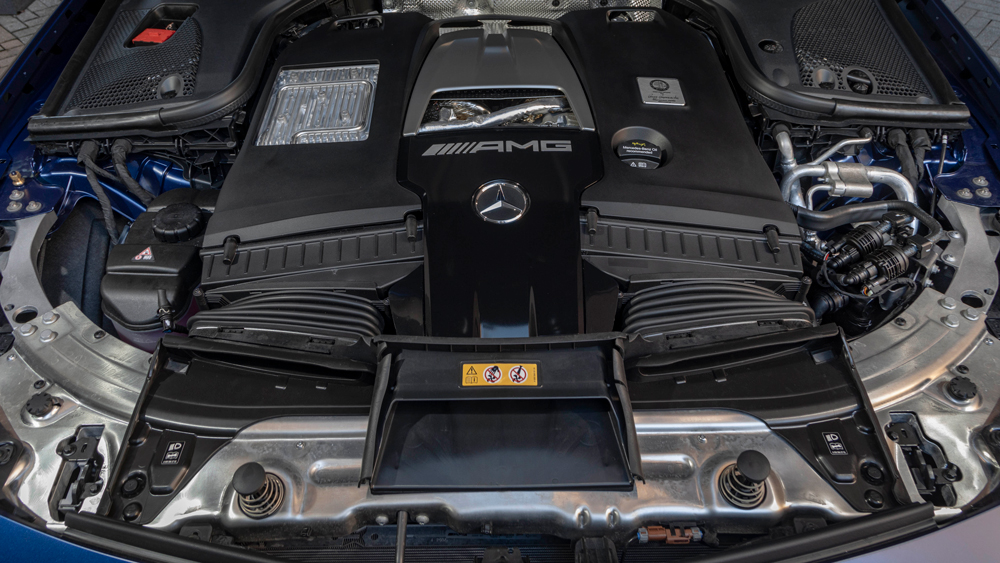 Make no mistake, this is a big vehicle with a rather amorphous shape that really shouldn’t appear as good as it manages to look. But the overall proportions and sheer length give it an athletic stance, especially with the massive gold calipers and big rotors of the AMG carbon-ceramic braking system peeking out from behind the optional 20-inch forged cross-spoke wheels. It’s not that the standard steel rotors won’t stop the car, but the brake option adds some flair and will appeal to dedicated followers of AMG fashion.

Once inside and situated behind the Alcantara sport steering wheel, one senses the luxury of the Nappa leather seats and leather trim with contrast stitching. The sporty cabin affords plenty of elbow room, and while it’s not an S-Class, it’s sufficiently capacious for drivers 50kg lighter than William Howard Taft. Carbon-fibre trim was chosen for our car, as was the  Acoustic Comfort Package, which adds additional noise and heat insulation and infrared-reflecting laminated glass. The tranquillity is almost eerie, as one hears the visceral bark of the engine and sport exhaust without the deafening immediacy of other cars as mechanically endowed but without much insulation. 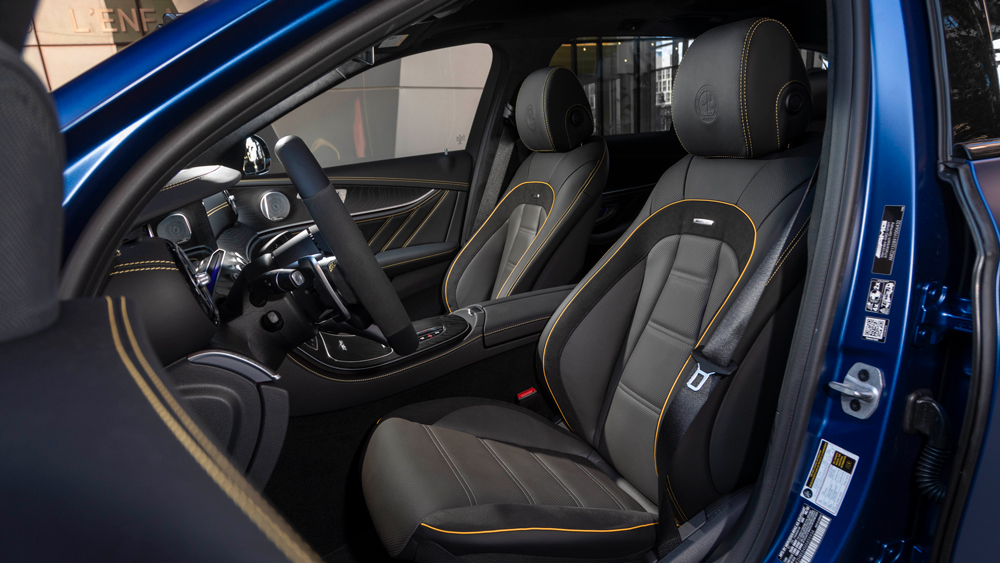 Unlike the new S-Class, which features a revised interior layout with a smaller driver display and a larger centre-console tablet, the E-Series uses a wide glass screen sprawling across the dash that recalls a teenager’s video war-game console. The new MBUX (Mercedes-Benz User Experience) multimedia system, employing Artificial Intelligence, uses an intuitive operating system (intuitive, that is, once the driver has dedicated some time reading the manual and experimenting in real time) activated by voice command, touchpad or steering-wheel controls.

The phrase “Hey Mercedes” brings the AI genie out of the bottle. Driver assistance systems—some standard and others optional—offer a veritable A-to-Z of safety enhancements, including DISTRONIC adaptive cruise control, active steering and a laundry list of driving aids for lane changing, blind-spot detection, emergency stops, cross-traffic functionality and a host of other supports. 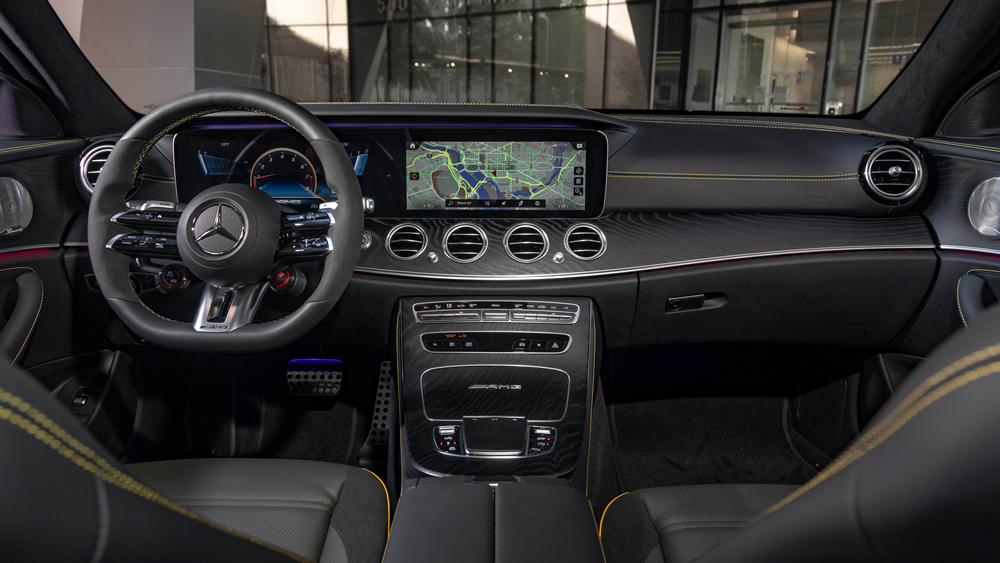 The AMG Wagon excels at everything. It delivers brutal acceleration and responsive handling, while meeting every Mercedes-Benz standard for luxury, convenience and safety. Able to shame more purpose-built performance cars, it would be the perfect antidote to Audi’s RS6 – however, Australian’s are going to have to do without, as Mercedes-AMG plans to bring only the sedan to our shores.