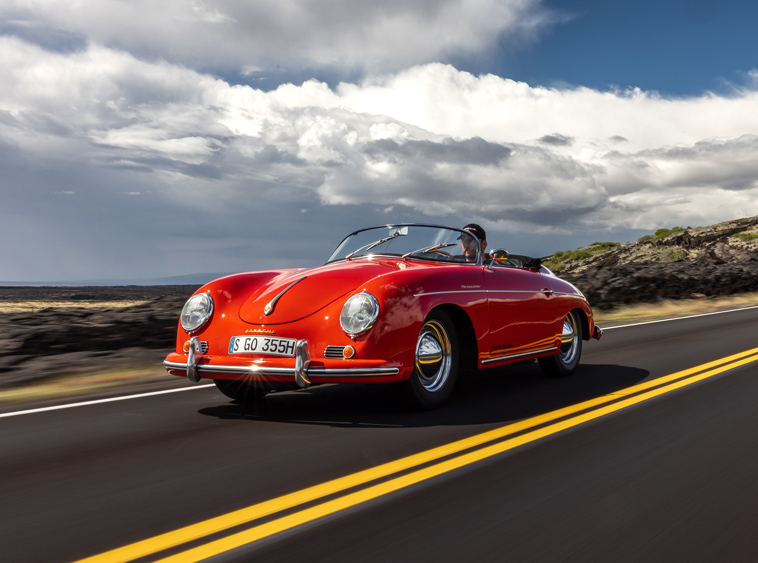 Why the classic model is still a thrill.

For the most visceral and engaging drive experience of your life, I suggest that you drop behind the wheel of a 1955 Porsche 356 A 1600 Speedster. Within the first kilometre, your whole perspective on piloting a motorised vehicle—sounds, sights, smell and awareness—will be altered and permanently recalibrated.

Porsche’s 67-year-old Speedsters are a rare sight these days, especially when they are in pristine condition and valued at upwards of $700,000 dollars. So, hats off to the Porsche Museum in Stuttgart, Germany for allowing a gorgeous red roadster to be loaded onto a plane for a 12,000km flight to the tropical Hawaiian Islands. There, I was given the opportunity to wrap my fingers around its mahogany steering wheel and travel magically back in time.

Touted as a purist’s sports car, the Porsche 356 A went into production in 1954 alongside its coupé and cabriolet siblings. The Speedster, a cut-down version of the cabriolet, is a lightweight roadster distinguished by its low, raked removable windshield, lowered doors, minimalist top (side curtains instead of roll-up windows) and spartan interior. Its curb weight is just 770kg. 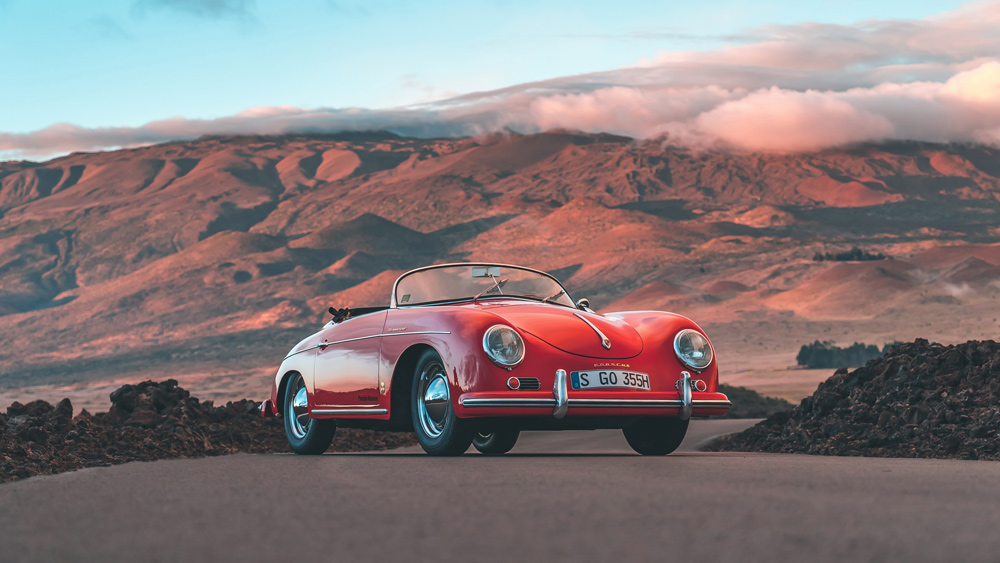 The 1955 Porsche 356 A 1600 Speedster on loan from the Porsche Museum in Stuttgart, Germany. Photo: Courtesy of Porsche AG.

While the 356 A was offered with engines as small as 1,300cc, the race-worthy Speedster variant was fitted with larger engines to improve performance. As a result, the Museum’s Porsche 356 A 1600 Speedster boasts a 1,582cc, air-cooled horizontally opposed four-cylinder rated at 44kW. A four-speed manual gearbox was standard fitment.

There isn’t much to the 356’s cabin. Two thin-shell non-reclining bucket seats—sans head restraints and seatbelts—occupy floor space with the shift lever and heater control knob (the parking brake is a T-shaped handle above the driver’s left knee). There is some room directly behind the seats to accommodate a camera or duffle bag, but not anything much more significant. There is additional luggage space in the nose, or frunk, but contents fight a spare tire for real estate.

Behind the thin-rimmed Nardi steering wheel are three round dials—a gauge for oil temperature and tank capacity on the left, the tachometer in the middle, and one for the speedometer, odometer and trip odometer on the right. There are a few other odd knobs to control the wipers and lights. And lastly, the key slot is on the right side of the steering wheel, a rarity on a Porsche, and unlike the coupe and cabriolet models. 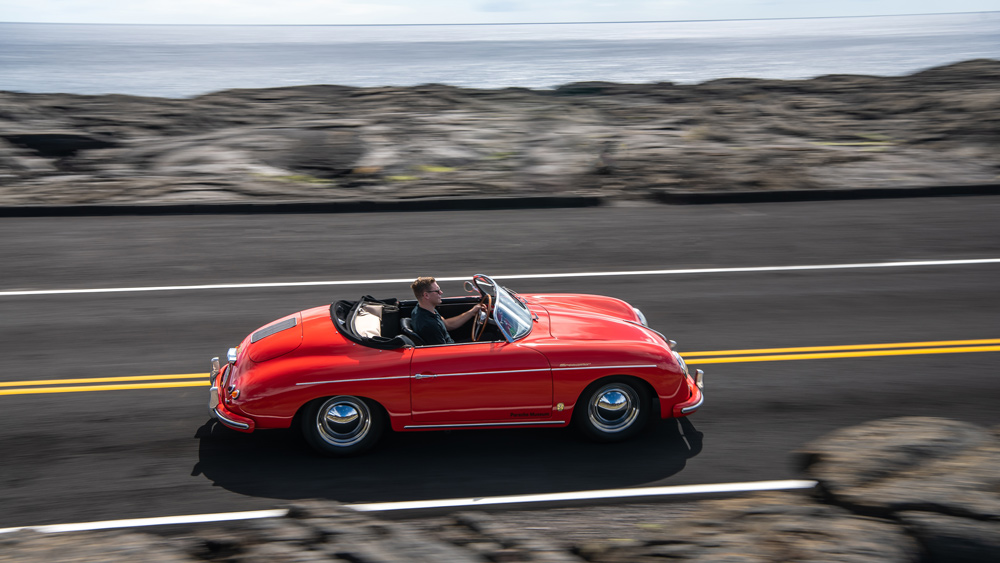 The car is remarkably stable at highway speeds, but the chassis seems to have a delayed response to steering inputs. Photo: Courtesy of Porsche AG.

The 1.6-litre engine fires to life with an uneasy idle as it fights the cold oil. There’s a so-called “choke knob” above the driver’s right knee, but it is nothing more than a piano wire link to the accelerator linkage. A few twists eventually pacify the dual Solex carburettors (once the engine is warm, there is no need to touch it again).

Forget everything you know about modern manual gearboxes, which use springs to self-centre the shifter and guide the lever within the gate. The Speedster’s shifter offers zero feedback; it’s a tall thin rod that you move around until you find the desired gear (which, thankfully, isn’t as perplexing as it sounds). The spring-loaded clutch is equally as awkward underfoot, but when it’s against the firewall, you know it’s disengaged.

The roadster’s low mass makes pulling away from a stop accessible. Give the Porsche a bit of throttle, and it doesn’t resist the clutch plate engaging as the Speedster scoots forward without drama. It’s equally as effortless to row through the gears, as long as nothing is rushed. Before gently selecting the next, I bring the flat-four power plant up to about 5,000 rpm, about 750 rpm shy of redline. 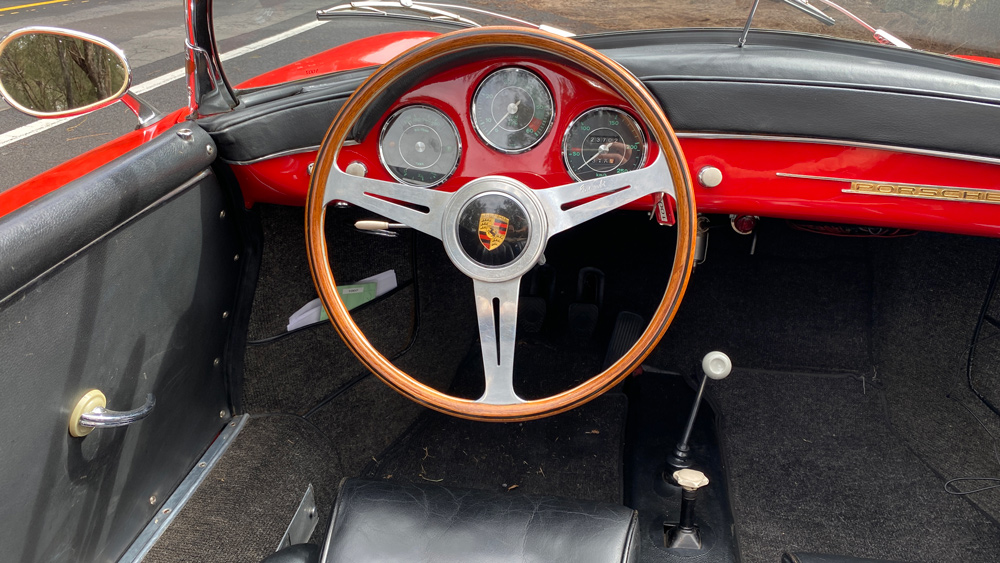 A thin-rimmed Nardi steering wheel fronts the car’s three round dials that house the oil-temperature and tank-capacity displays, the tachometer, the speedometer, odometer and trip odometer. Photo: Courtesy of Porsche AG.

Acceleration sounds spectacular, yet the wonderful music belies the reality. The small four-cylinder works feverishly at the aft of the chassis with nothing more than a thin sheet of steel to dampen the din beneath the ventilated decklid. The exhaust note complements its metallic tune from the twin thin pipes at the rear. But the Speedster is not fast by today’s standards. Despite its raucous audible theatrics and the need to shift near redline to squeeze every bit of power out of the engine, the car delivers a zero-to-100km/h sprint in just over 12 seconds. That’s slower than all of today’s minivans.

The vehicle, however, is remarkably stable at highway speeds, despite rolling on narrow (165/80-15) Pirelli Cinturato tires. It only takes small movements on the oversized steering wheel to keep the car tracking straight, and it doesn’t wander, even if the road surface is undulated. And despite the minimalist windshield and lack of side windows, buffeting isn’t a problem for the passengers, assuming they are shorter than six feet in height (I’m a couple of inches taller, and my baseball cap was nearly sucked into the overhead slipstream a few times). 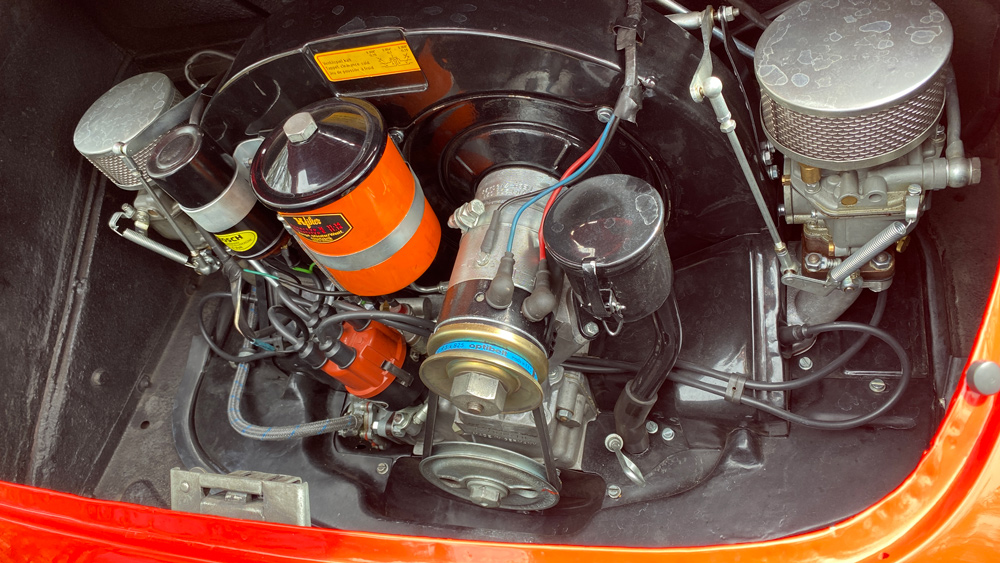 The torsion bar all-independent suspension is surprisingly supple over bumps, but the rudimentary underpinnings are less impressive in controlling body roll and chassis movement during aggressive maneuvers. The steering is slow, and the chassis seems to follow steering inputs at its own leisurely pace. It’s not sloppy, just delayed (saying the handling reminded me of piloting a ski boat would be accurate). And when it’s time to reign in the speed via the hydraulic drum brakes at each corner, it takes a firm leg on the brake pedal to bleed off velocity with any authority. Don’t push too hard, though, or you will lock up a wheel.

As you can imagine, 100km/h on a two-lane Hawaiian road, when you aren’t wearing seatbelts, feels treacherously fast in a 356 A 1600 Speedster. The pace is artificially amplified by the other vehicles on the road, especially trucks approaching in the opposite direction, which dwarf the red Porsche in size and mass. There’s no spare moment to be concerned, however, as the task of driving the time capsule is overwhelming enough.

Guiding the Speedster down the road requires the driver’s full attention. Yet distractions are everywhere—the rush of the wind, the smell of the flowers along the flanks, the intoxicating noise of an engine that deliciously cackles and pops loudly upon downshifts, the sluggishness of the controls and the requisite search for tire-swallowing potholes is all-encompassing. As a result, this is a driver’s car to the nth degree. 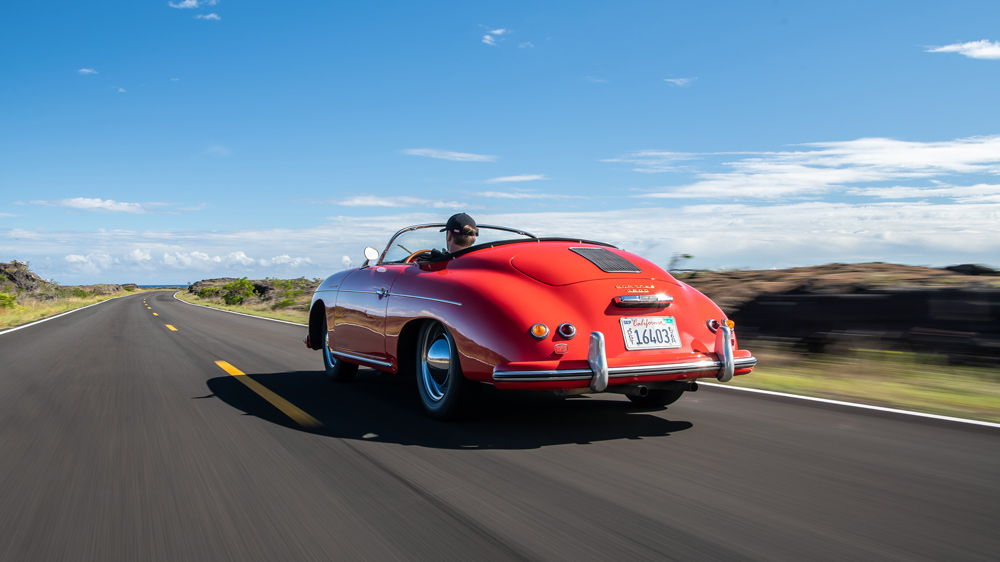 Acceleration sounds spectacular, and the exhaust note is sung from the twin thin pipes at the rear. Photo: Courtesy of Porsche AG.

And that is the natural charm of this Porsche, even after nearly seven decades. Unlike late-model vehicles engineered to ease the workload while isolating and protecting their occupants, the Speedster requires adeptness while leaving you vulnerable and with a continuous adrenaline rush. Rest assured, there’s an overarching sense of satisfaction and reward when you arrive at your destination.

Driving enthusiasts have been celebrating the Porsche 356 A 1600 Speedster since its debut, and after a few hours behind the wheel, it’s easy to understand why. The two-seater was engineered with slide rules and gut intuition to be light, reliable and fun. Porsche certainly accomplished its design objectives and, in doing so, created an icon.