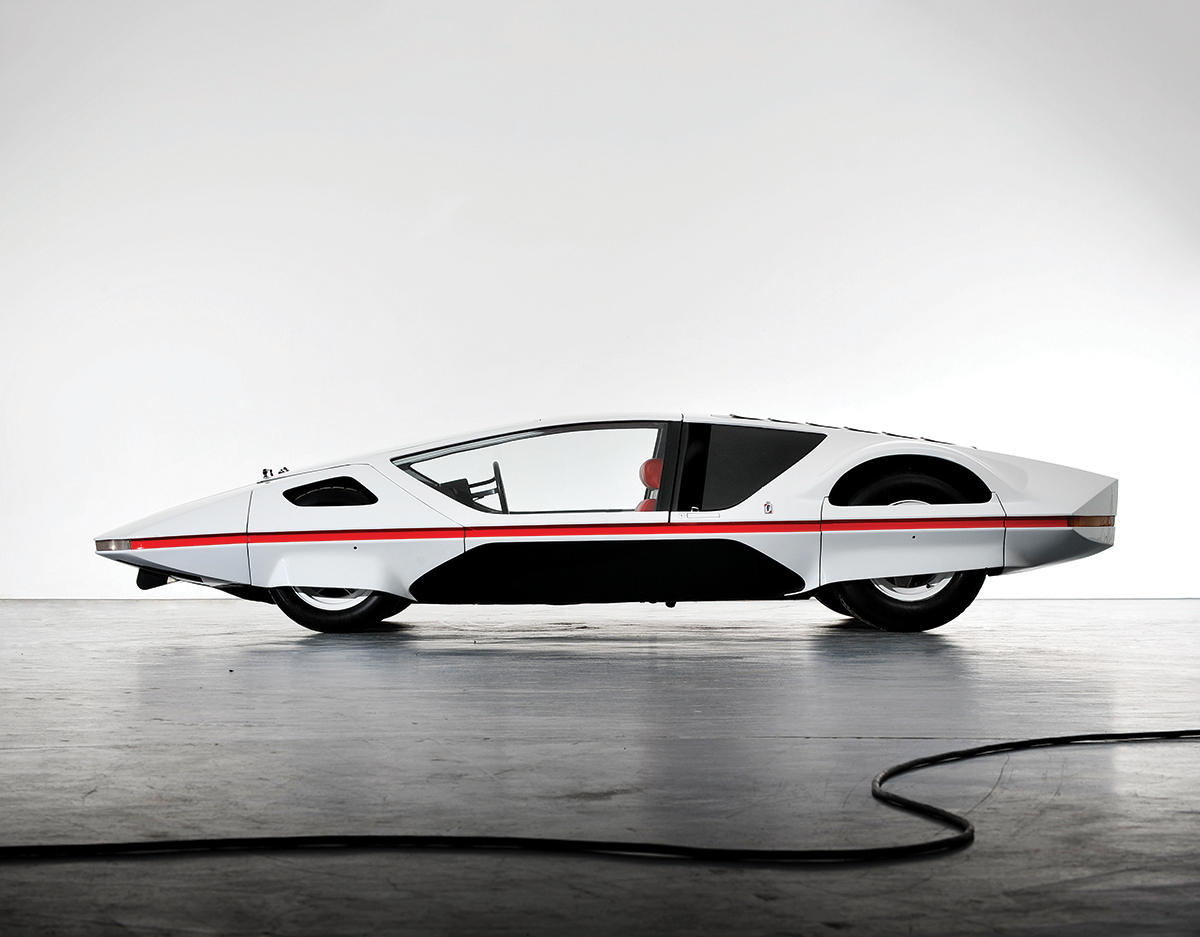 From fierce to eco-friendly, concept cars are the automakers’ crowd-sourced R&D.

The history of concept cars begins in earnest in the 1950s, but for context, you need to head a little further back in time. As the United States lurched out of the Great Depression, a middle class emerged, sufficiently affluent to afford automobiles in greater volumes. The look of a car quickly became its most salable feature. New styles sold new cars, so frequent updates became essential to moving metal. With the outbreak of World War II, car manufacturing worldwide trickled to a halt but resumed with a vengeance in 1946, and by 1950 the race to capture brand-loyal customers was on.

Dream machines came into their own, with international motor shows attracting hundreds of thousands of visitors worldwide to see the latest vehicles, and to get a glimpse of the future. Manufacturers were only too eager to whet these appetites with concept cars that explored—and influenced—new aesthetic and technology trends. Some were evolutionary, others so outlandish they could not possibly be mass-produced. The boldest concepts established manufacturers such as General Motors as visionaries, at the same time gauging just how much innovation the public would actually park in their driveways.

But while early concept cars were often freewheeling fantasies sketched in the studio, today’s concept cars are informed by a sophisticated mash-up of engineering data, focus groups, shareholder profits and all manner of global emissions and safety regulations.

From the beginning of aviation, aerodynamic efficiency—whether real or implied—has been an overarching principle for forward-thinking car designers, knowing that sleek bodies cheat wind, save fuel and look like they’re going fast even when they’re standing still. Polymath Buckminster Fuller exhibited his blimp-shaped Dymaxion, one of the first extreme automotive aerodynamic exercises, at Chicago’s 1933-34 World’s Fair. The Dymaxion (Dynamic, Maximum, Tension) explored the potential for a vehicle that could drive and fly. And while never intended as a commercial venture, it expressed Fuller’s utopian imaginings, which encompassed geodesic domes, solar electricity and freedom from traditional means of transportation. 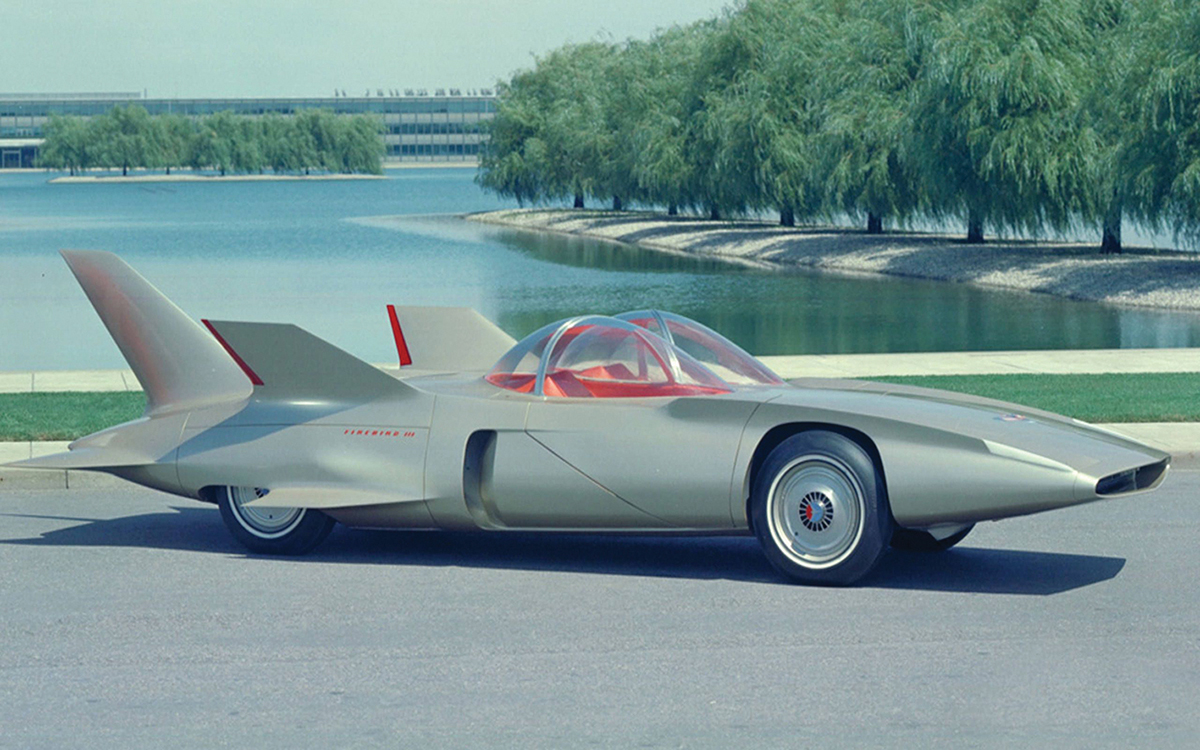 GM design boss Harley Earl was the man whose design vision charted the company’s postwar growth as the world’s leading automaker. His 1938 Buick
Y-Job (sketched by George Snyder) is considered the first auto-show styling concept, meant to enthral the public with its looks. Long, low and with lots of chrome, it set the tone for the coming decade, one in which the American automotive industry would reign supreme.

Some concepts set styling trends from stem to stern. GM’s jet-fighter-inspired 1951 LeSabre boasted tail fins that soon became de rigueur on American luxury cars like Cadillac. Others, such as GM’s Firebird I, II and III (created from 1954 until 1958) were impractical dreams that looked like wingless jet fighters and were propelled by turbine engines. The Firebird II was, presciently, meant to be autonomous, “releasing the driver from the wheel” on a so-called “Highway of Tomorrow,” according to its 1956 publicity brochure.

Americans weren’t the only car designers with a crystal ball. The Italians, especially, were hard at work imagining what the future would hold, often incorporating novel styling into one-off or limited-series models for marques like Ferrari, Alfa Romeo and Lancia. Zagato, a carrozzeria whose founder cut his teeth designing aircraft, adapted the same aluminium fabrication expertise to the design of slippery sports cars.

The carrozzeria Bertone, meanwhile, pushed the aerodynamic envelope with the Alfa Romeo BAT 5, 7 and 9, Italy’s most influential concept cars of the 1950s, all designed by in-house stylist Franco Scaglione. Pininfarina was no less extreme with its X concept car and Fiat-Abarth Monoposto, both from 1960, inspired by rockets that captured the public imagination at the dawn of space exploration. More radical designs were conjured between 1960 and 1970 than in perhaps any other decade, and by the end, concept cars were low, creased wedges that aptly prefigured the following decade’s hard-edged aesthetic.

In 1978, an ambitious young Los Angeles designer named Gerald Wiegert unveiled his Vector W2 prototype, a wedge-shaped assault weapon challenging the most radical inventions from Ferrari, Lamborghini and Porsche. His company was never the same after a boardroom fight in 1993, though with coincidental timing, Gordon Murray’s McLaren F1 took centre stage as the world’s most capable supercar.

If today’s concept cars don’t seem quite as outrageous as their more extreme predecessors, it’s in part because materials and technologies heretofore unimaginable—exotic composites and metallurgy, even tires that hold up at 480km/h—are now possible. Aerodynamic solutions, a fundamental trait of futuristic design from the beginning, are incorporated into the most quotidian automobiles. Horsepower routinely eclipses the once unthinkable 1,000 hp threshold, with 1,500 hp now considered a realistic target for modern hypercars.

Such massive power is a hallmark of cost-is-no-object one-offs like Bugatti’s La Voiture Noire (the Black Car), which won the Villa d’Este Design Award for concept cars in 2019. Based on the Chiron and with nearly 1,500 hp (1,119kW), it recently sold for approx. $18.2 million to a private buyer.

While good looks and high performance will always be a part of the concept-car equation, overarching concerns of gridlocked motorways and a planet further warmed by internal combustion are driving designers, engineers and the automakers that employ them to consider solutions that address the future’s substantive global transportation challenges. Ferrari’s most powerful series-production car ever, the SF90 Stradale, already combines a V8 engine with three electric motors for a total output of nearly 1,000 hp (746kW).

Indeed, the writing is on the proverbial gas-station wall, and it suggests that in our near future, the oil oozing from dead dinosaurs may best remain underground for another 65 million years. So, apart from emphasising brute output, concepts with gas hybrid, fuel-cell hybrid and, especially, electric power trains are quickly replacing pure internal combustion engines.

The 2018 Audi PB18 e-tron proposes that the future is an all-electric one. The Genesis Essentia EV and Italdesign’s gullwing DaVinci, both made for electric power, point the way forward from the perspective of a South Korean mass producer and a bespoke Italian design studio, respectively. Porsche’s Taycan turned from the 2015 Mission E concept to production sedan this year, proof that the automobile’s electric future is here, now.

All of which presupposes that someone will actually need to drive tomorrow’s cars. Hundreds of millions of motorists endure rush-hour purgatory every day, and who among them would not embrace deliverance through autonomous contraptions that could speed their commutes and liberate them from the horrors of not just stop-and-go traffic but automobile accidents and bodily injury. Automakers across all segments are coming to terms with the “autonomous agenda”. The Rolls-Royce 103EX from 2016 was a visionary concept car that demonstrated the natural affinity of luxury and autonomy. Sports-car manufacturers have a tougher row to hoe. It’s difficult to imagine any Porsche, Ferrari or Corvette driver giving up the wheel without his or her cold, dead fingers being pried from the rim.

Offering unabashed opulence and a far-reaching look into the future of autonomy is the Bentley EXP 100 GT, an electric-powered concept car with 1,500Nm of torque, revealed last year as a tip of the hat to the marque’s centennial. Imagine a Bentley in 2035. It incorporates AI to optimise cabin conditions, using biometrics to monitor an occupant’s mood, blood pressure and body temperature. Seats double as massage chairs. Pleasant smells, such as the sea air or forest pines, can be filtered in, while noxious odours are blocked. When you have such interesting distractions—maybe even a good novel—perhaps having the computer take the wheel won’t be such a bad trade-off after all.