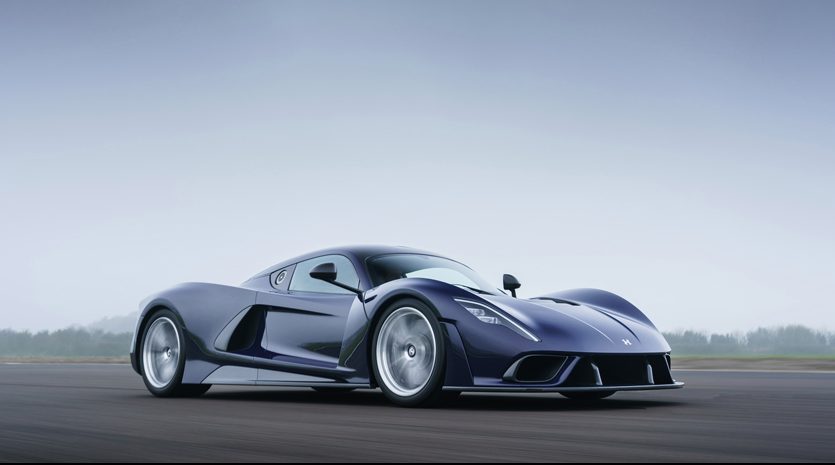 The founder of Hennessey Performance on life in pursuit of 500km/h.

Hennessey Performance has been building much anticipation—and a fair share of speculation—about its Venom F5 hypercar by drawing out the reveal in measured doses. First was the debut of a static prototype at the Specialty Equipment Market Association (SEMA) show in 2017, followed by the premiere of the car’s custom-made engine at the Quail Motorsports Gathering in 2018. Today, the Texas-based company finally unveiled the production version of its 1355kW model, and it appears that the early hype was, if anything, an understatement.

Since its inception, the mid-engine coupe has signalled a new road for Hennessey, long known for engineering super-potent high-horsepower versions of other manufacturer’s offerings. But that changes with the clean-sheet, approx. $2.7 million Venom F5, of which only 24 examples will be made. The vehicle’s tech figures are as eye-catching as its carbon-fibre bodywork and include a zero-to-100km/h time of 2.6 seconds, 1617Nm of torque and a dry weight of 1360kg. 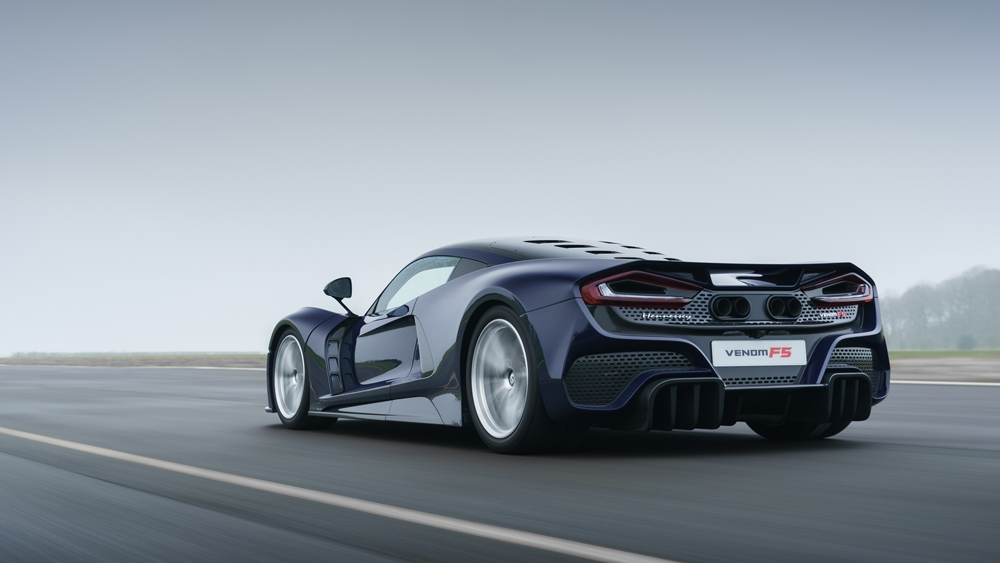 But the specs only tell part of the story. It had been a while since we first spoke with Hennessey Performance founder and CEO John Hennessey about the Venom F5, but he recently found time to catch us up on why he needed to build it, the process involved, his thoughts on the production-car speed record and pulling unexpected benefits from pandemic delays. 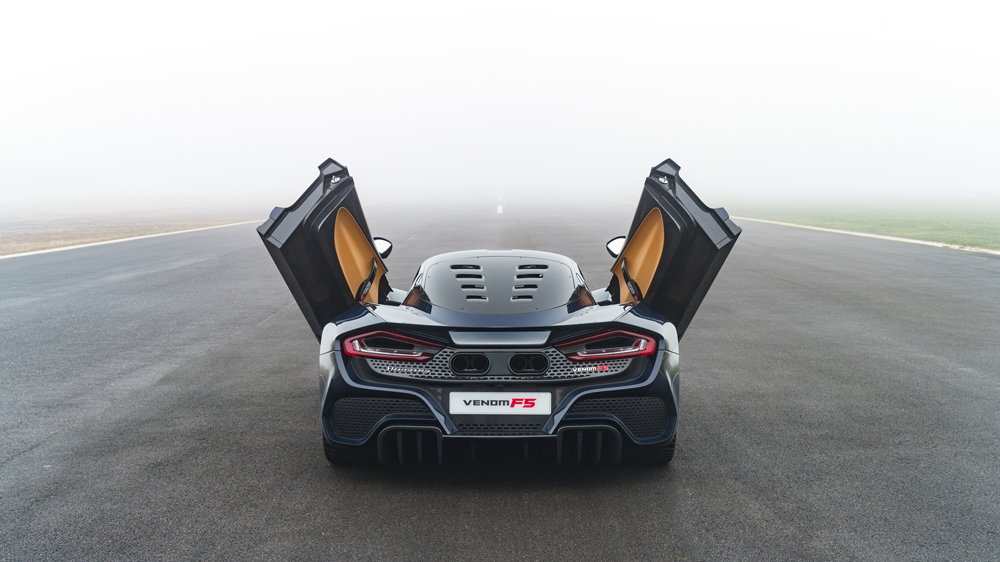 Only 24 examples of the approx. $2.7 million hypercar will be made. Photo: Courtesy of Hennessey Performance.

RR; What has been the Hennessey Performance mission statement since you founded it in 1991?

JH: When our kids were in first grade, we had a conversation in the car on the way home from school, trying to boil down what I did when asked by their teachers and friends. I said, “Just tell him that daddy makes fast cars go faster.”

RR: Your new Venom F5, however, doesn’t quite fit that philosophy.

JH: The Venom F5 is the only thing that we’ve ever built that was like a clean sheet of paper. We took everything that we knew and liked from the previous 29 years and tried to put the best of all of our know-how in the all-new car. 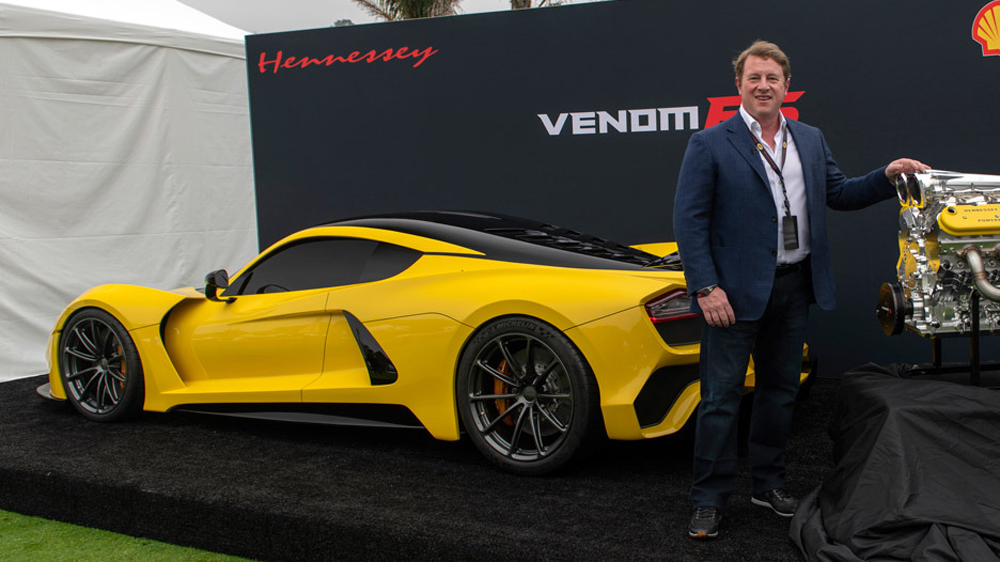 John Hennessey stands with a Venom F5 static prototype and a newly developed engine at the Quail Motorsports Gathering, in 2018. Photo: Courtesy of Hennessey Performance.

RR: Why now? And what was your inspiration?

JH: Back about 10 years ago, we built the Venom GT and sold about a dozen cars. We also set three speed records with that car. But we built our supercar around the chassis of the Lotus Elise Exige. With the Venom GT, we felt like we had unfinished business—the car didn’t really get the credit it deserved. I sent some renderings to Phil Schiller, who had just recently retired as the chief marketing officer at Apple. He told me, “You’re not going to get credit for having your own car until you build your own car.” That email was the kick in the butt I needed to begin the journey. That was March of 2013. And here we are today with a car made from the ground up.

We designed and built our own chassis and have a spreadsheet listing over 600 pieces of tooling to make the carbon-fibre chassis, the exterior bodywork, the components in the engine compartment and all the carbon-fibre pieces in the interior. There are over 3,000 bespoke parts, nothing sourced from other cars.

RR; What was the Venom F5’s development process like?

JH: I think the biggest premise, once we started moving forward with the design of the car, was having an aerodynamic package that would allow us to break 300 mph (480km/h). We initially were shooting for a very low coefficient of drag number, but we found that when we got into that process, we still needed to have a proper level of downforce in the car to balance it out, whether you’re at 100 mph or 300 mph. I’d say we spent over six months just doing the computer analysis on the aero, the drag and the overall setup of the car.

Beyond that, the next big edict was that we wanted the car to be under 3,000 pounds (1360kg). Again, that meant building our own super-lightweight chassis. We also needed best-in-class braking, so we worked with the folks at Brembo and AP Racing on the braking system. Same thing on the handling: we have a full Penske adjustable suspension.

And then we have John “Heinrocket” Heinricy. John was with General Motors for 38 years. He retired, about 10 years ago, as the director of the GM performance Division. He has over 1,000 laps at the Nürburgring and is a 15-time SCCA champion. When the F5 program began, before we did any of the engineering or design, John basically helped us fill out that clean sheet of paper in terms of what we want to build and how we want to build it to achieve all these goals. That’s been the process that has gotten us to where we’re at now. 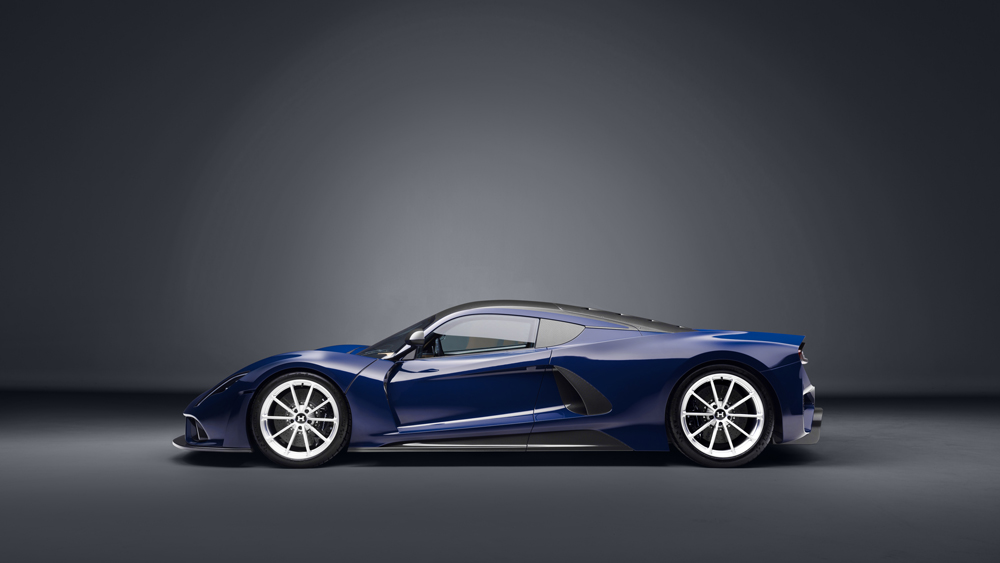 RR: What’s been the greatest challenge in creating the Venom F5?

JH: That’s a no-brainer. It’s the same greatest challenge we’ve all been dealing with for the last nine months—Covid. It affected our supply chain, especially when we’re working with suppliers from Texas, California, England and Italy. When we found out in September that we weren’t going to get the last component—the steering wheel—until November 26, we focused on what to refine. Our design director and team were able to load the car with lots of amazing details and Easter eggs. In a way, Covid forced us to slow down and take more time on the interior, really take it to another level. 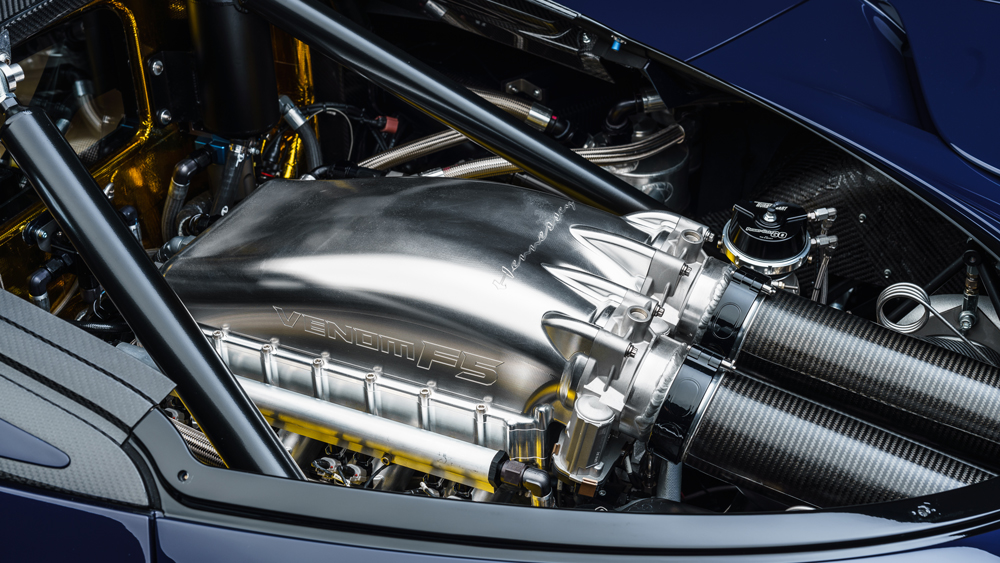 RR: Is there an element of the car that you’re most proud of?

JH: I’m probably most proud of the team and that we’ve been able to achieve this. It kind of goes back to the Kennedy moon speech and how we do these things “not because they are easy, but because they are hard.” This project was hard, expensive, time-consuming and the most challenging thing I’ve ever done professionally—and that was before Covid. Layer Covid on top of it and it’s a miracle that the Venom F5 turned out, and at a such a higher level than I had imagined three years ago. I think the details of the car speak just as loud as its 1355kW Hennessey twin-turbo V-8 engine. And that’s because of the team. 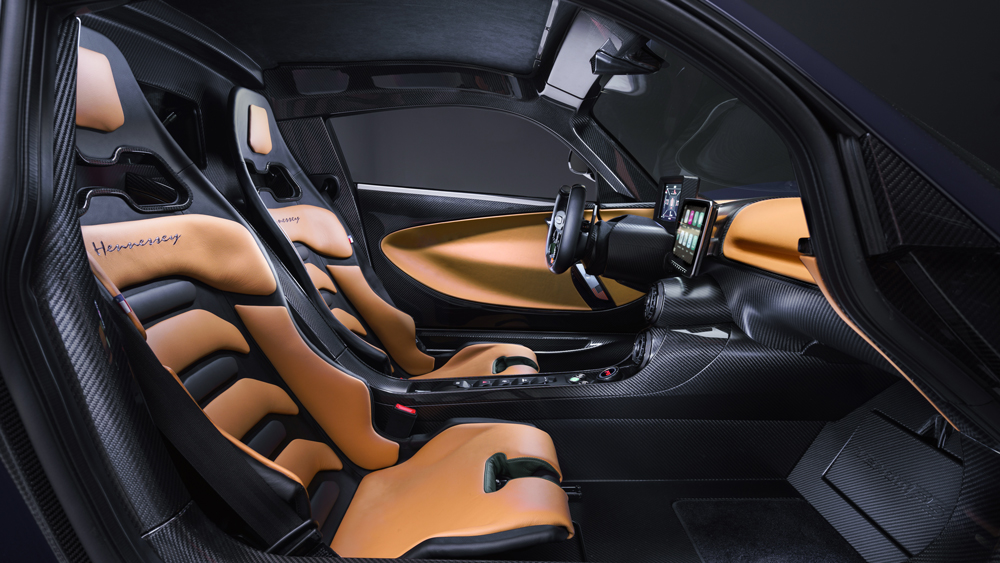 Where do you see the Venom F5 taking Hennessey Performance?

The F5 is a tangible representation of a reinvention of me, and the company. I want to make it clear that there will be other ground-up, bespoke-built cars from Hennessy to follow after the F5. And we’re seriously considering electrification as possibly being part of that plan. 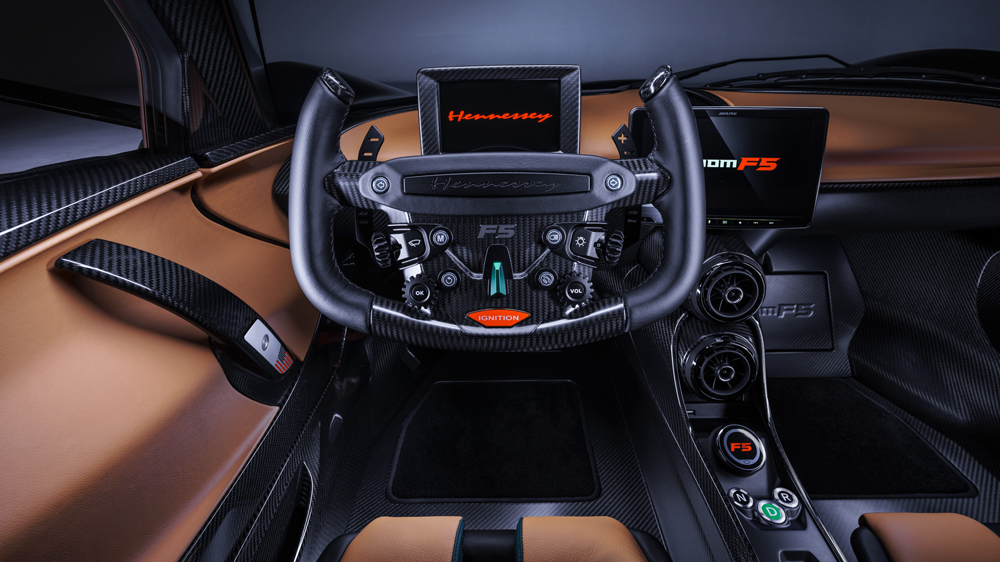 The steering wheel is inspired by Formula 1 and fighter jets. Photo: Courtesy of Hennessey Performance.

Do you still have the production-car speed record in your sights for the Venom F5? 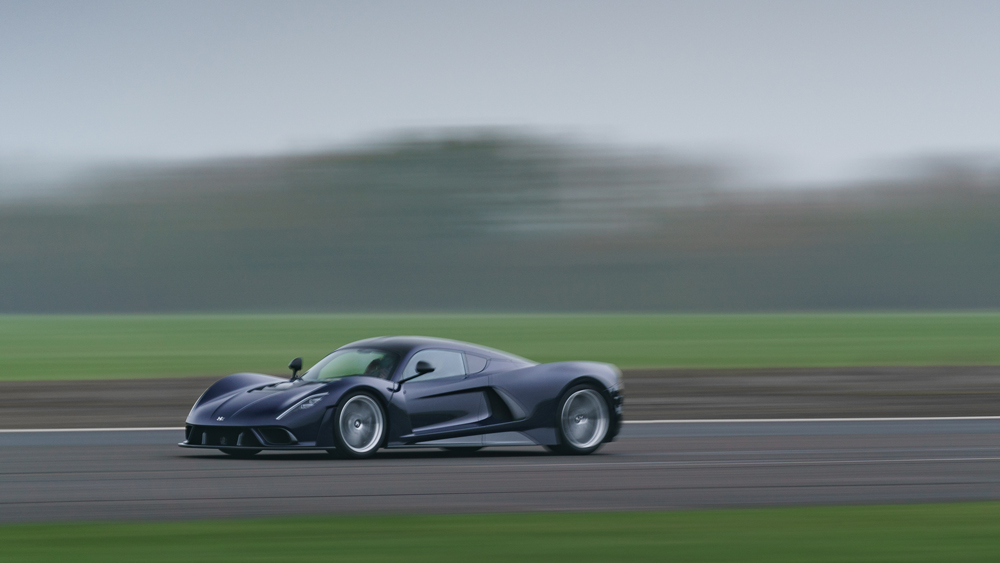 Hennessey has targeted a speed of 500km/h if a record attempt is made with the Venom F5. Photo by Dean Smith, courtesy of Hennessey Performance.

When we go out to do high speed runs, we’re not necessarily going out there for marketing activities, we’re out to make sure that the car is the best performing car and the safest possible car for our clients. If, along the way, we’re able to validate a top-speed number, we’ll bring in independent engineers from Racelogic. I can promise you this: There won’t be any controversy. If we’re able to go out and run a big number, everybody will know what it is, and that’ll be the end of it.