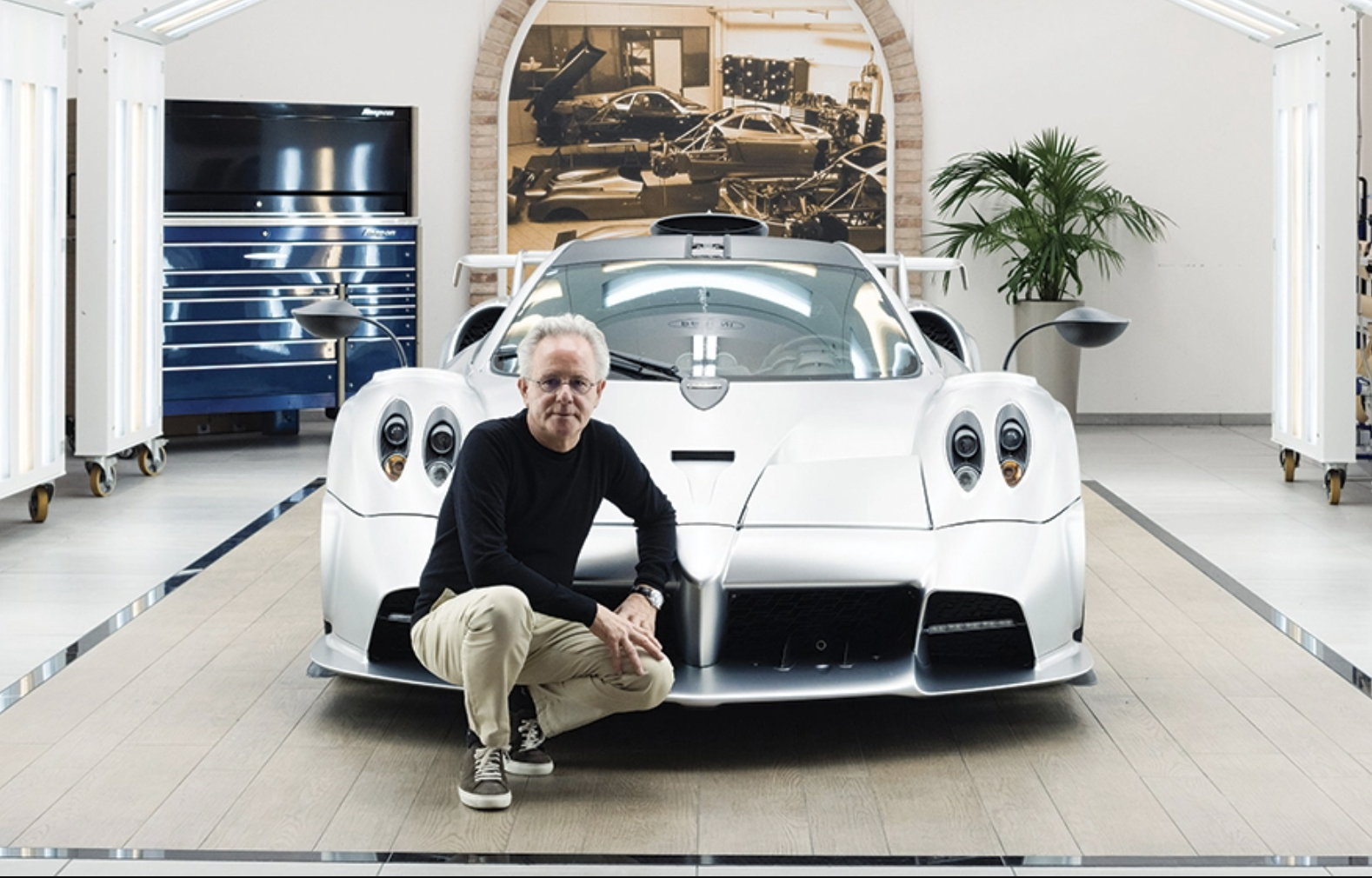 Like Leonardo da Vinci, the Renaissance master who inspires him, Horacio Pagani resides at the intersection of creativity and analytics. A true outlier, the 66-year-old hypercar designer and manufacturer combines latent talent, an innovative approach and enough flair to develop a model line that’s arguably the most exclusive in production: Fabergé eggs—crafted from noble alloys and bleeding-edge composites—capable of 350km/hand more).

Hailing from Casilda, Argentina, Horacio completed the construction of a single-seat race car for the Formula 2 Championship series at the age of 24. Soon drawn to Italy, he helped Lamborghini pioneer the use of composite materials before starting his own atelier, Modena Design. It was all building to the formation of Pagani Automobili and the debut of his Zonda C12 at the 1999 Geneva International Motor Show. Despite the demand for his current approx. $4.3 million Huayra R—of which only 30 examples will be built—and his diversification into industrial design projects that include furnishings as well as aircraft and commercial interiors, Horacio refuses to focus on his accomplishments. “I don’t like to use the word ‘success,’ and don’t like it used within the company,” he says. “We will use that word when [Pagani Automobili] turns 100 years old. It’s about small improvements and results.”

Who is your guru?

I have one of the most complete collections of Leonardo da Vinci’s books, which includes all his artwork and drawings, and have only read 20 per cent of it so far.

How has he influenced your design philosophy?

“Art and Science” is the company’s motto, a teaching of Leonardo’s combining scientific research and research of beauty. Our mission is therefore to be able to create an object that can tell a story, that can trigger emotions.

What have you done recently for the first time?

My life is always about the first time; every day I try to find something new to impress me, a new stimulus.

First thing you do in the morning?

I wake up very early and shower, then take an hour for breakfast while my dogs look on. I make coffee for my wife, then go Nordic walking for an hour around the park near my home before showering again and biking to work. 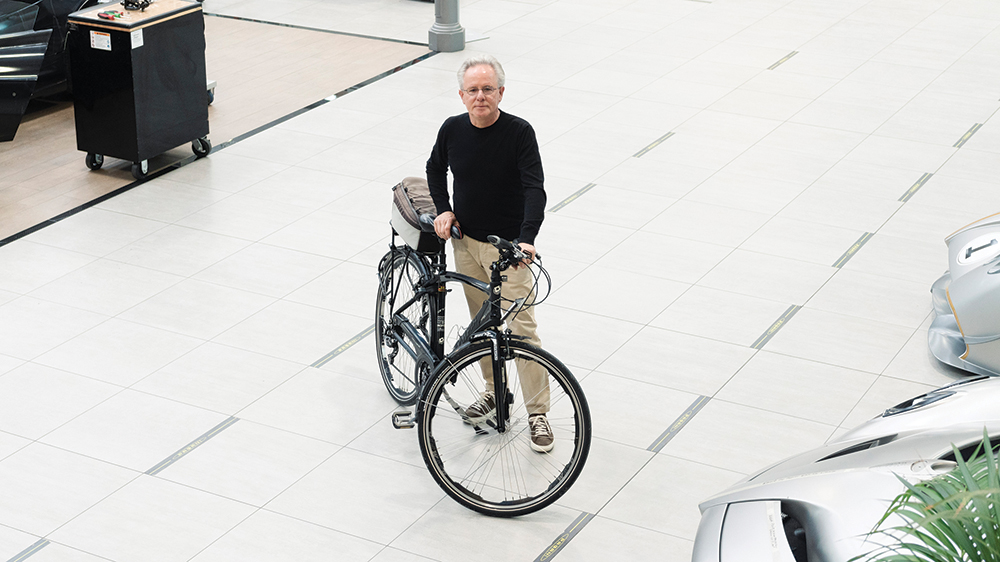 What, apart from more time, would make the biggest difference to your life?

I can’t ask for more than what I have; I really like my routine.

What apps do you use the most?

I use WhatsApp for messaging, a weather-forecast app so I know what to wear, finance apps and Spotify—a lot—for music.

What advice do you wish you’d followed?

I have tried to put into practice all the advice given from my parents and other people I’ve met during my life, but I would like to learn how to have more of a sense of humour about myself—to be less hard on myself.

What do you do that’s still analog?

Everything I do is analog. I was recently on an eight-hour flight and wanted to watch a movie, but the aeroplane was old and the interface was not that user-friendly, so I ended up reading a book. 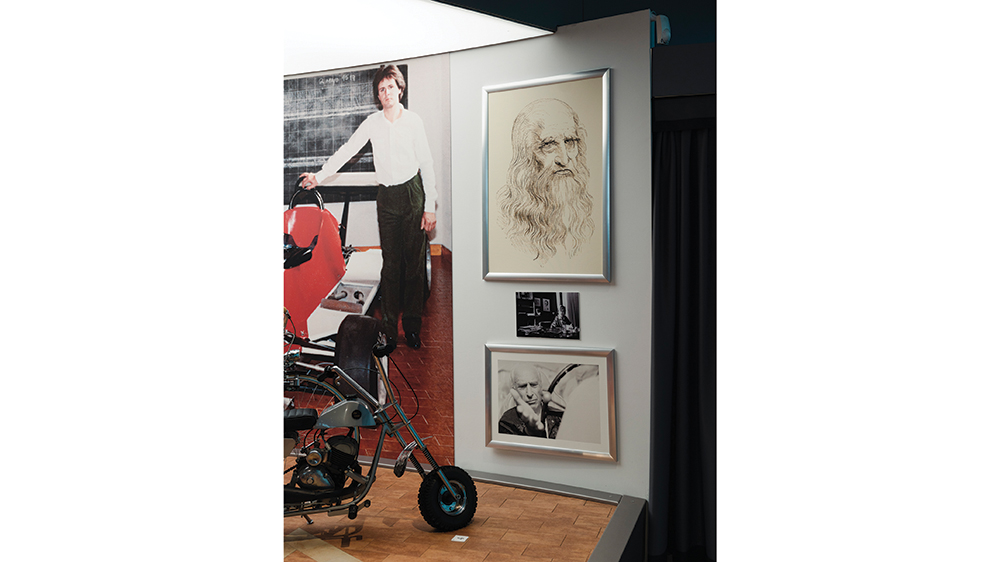 At his own museum, a portrait of Horacio flanks those of mentors, including racer Juan Manuel Fangio (framed at bottom). Martino Lombezzi

Lately, I’m wearing jogging attire and trainers because the relaxed clothing makes me feel like I’m not working. And when I’m with a client, I’m always very casual and never wear a tie.

What do you crave most at the end of the day?

A walk with my wife and dogs. I don’t have a crazy social life.

How do you find calm?

Meditation, even if there are a thousand people around me. I do it up to three times a day, from a few minutes to a half hour.

What song is currently in your head?

I always go around with headphones, as listening to music helps me switch from one project to another—whether designing a car or interiors for a hotel or a helicopter—and I like to have different music for every project.

What’s the most impressive dish you cook?

Normally my wife cooks at home, and she cooks very well, but everyone in the family is capable. My most impressive dish is asado, what you call barbecue.

I mainly collect cars and really like Porsches, so when the president of Porsche Italia has something new coming up, he calls me. I also collect model cars and exchange them with colleagues.

If you could learn a new skill, what would it be?

I have to make a lot of decisions and take responsibility, so I have to trust myself. Whether an entrepreneur, a magazine director or a school principal, all those important roles, in the end they are alone in making decisions, so they have to trust their instincts.

Where do you get your clothes?

I don’t enjoy shopping; usually my wife buys clothes for me. But I really like to go to Armani in Milan. I like the designer himself—he’s smart and creative—and I feel good when wearing his clothing.

Drive or be driven?

To be driven—unless it’s a sports car. Then I prefer to drive myself.

Are you wearing a watch? How many do you own?

Right now, I’m not wearing one. I have some timepieces, more than what I need—an Apple watch for the health apps and a Patek Philippe when I want to be elegant. There’s also one from Richard Mille, and he’s my friend, but I’m not really into the watch world. 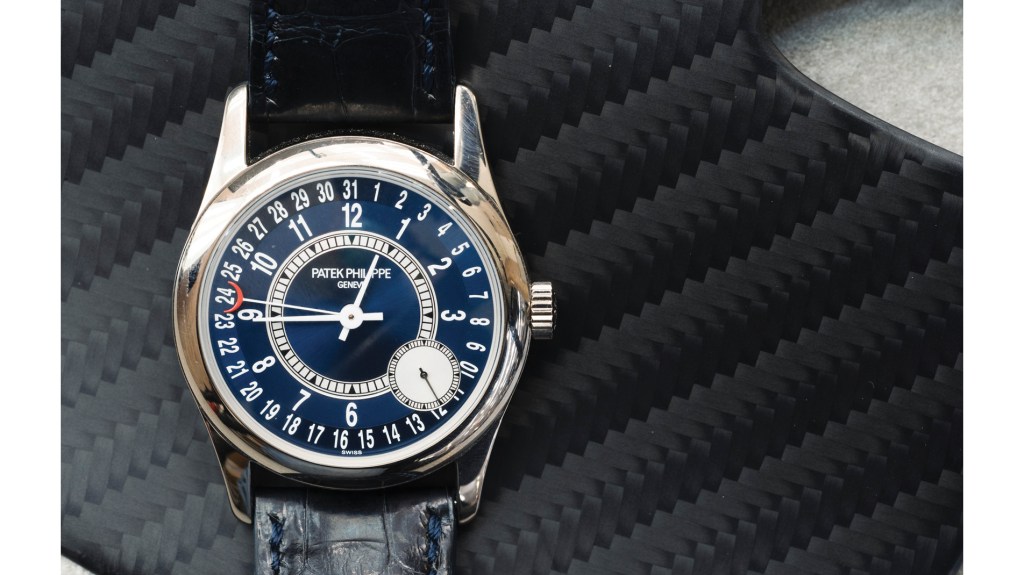 If you could stick at one age, what would it be and why?

I would love to be 20 years old, of course. How could I answer differently? But I’m also happy in my 60s.

What is the car you are most attached to?

The Porsche 917. Unfortunately, I don’t have one.

What’s your most treasured possession?