The unrivalled design icon celebrates its 50th anniversary this year — with a stunning new version to boot.

I’ve seen a lot of cars in my time, but there’s really only one I’ve spent many, many hours staring at, mouth agape, and not just because of the naked woman on top of it. Due to the incredible sale of wall posters of the ludicrously lovely Lamborghini Countach (with or without scantily clad sex bomb draped atop) in the 1980s and 1990s, there’s a good chance you may have done the same.

And a good chance that you might have felt as madly excited, and somehow sated, as I did when I finally got to drive one.

It’s hard to imagine a car world in which this legendary, door-wedged-slab of sharply savage design didn’t exist, as it’s become so iconic and evocative (indeed, Lamborghini claims it’s still the basis for every car they make today), but try to picture the impact it must have had when it was first unveiled at the Geneva Motor Show as a concept car, in 1971.

It had been built to improve upon the Miura, another Italian masterpiece often described as the most beautiful vehicle of all time, and it not only changed the way the world saw Lamborghinis forever, it changed car design itself.

Those incredible—and at the time supremely futuristic—scissor doors were remarkable enough on their own, but it might surprise you to hear they’re actually, at least partly, a practical concern. The Countach was so low (just 12 centimetres off the ground) that if you attempted to park it anywhere near a good-sized gutter you might not be able to get out with normal doors. Scissor styling fixed that problem while at the same time, in typical Lamborghini style, adding a huge splash of visual impact. 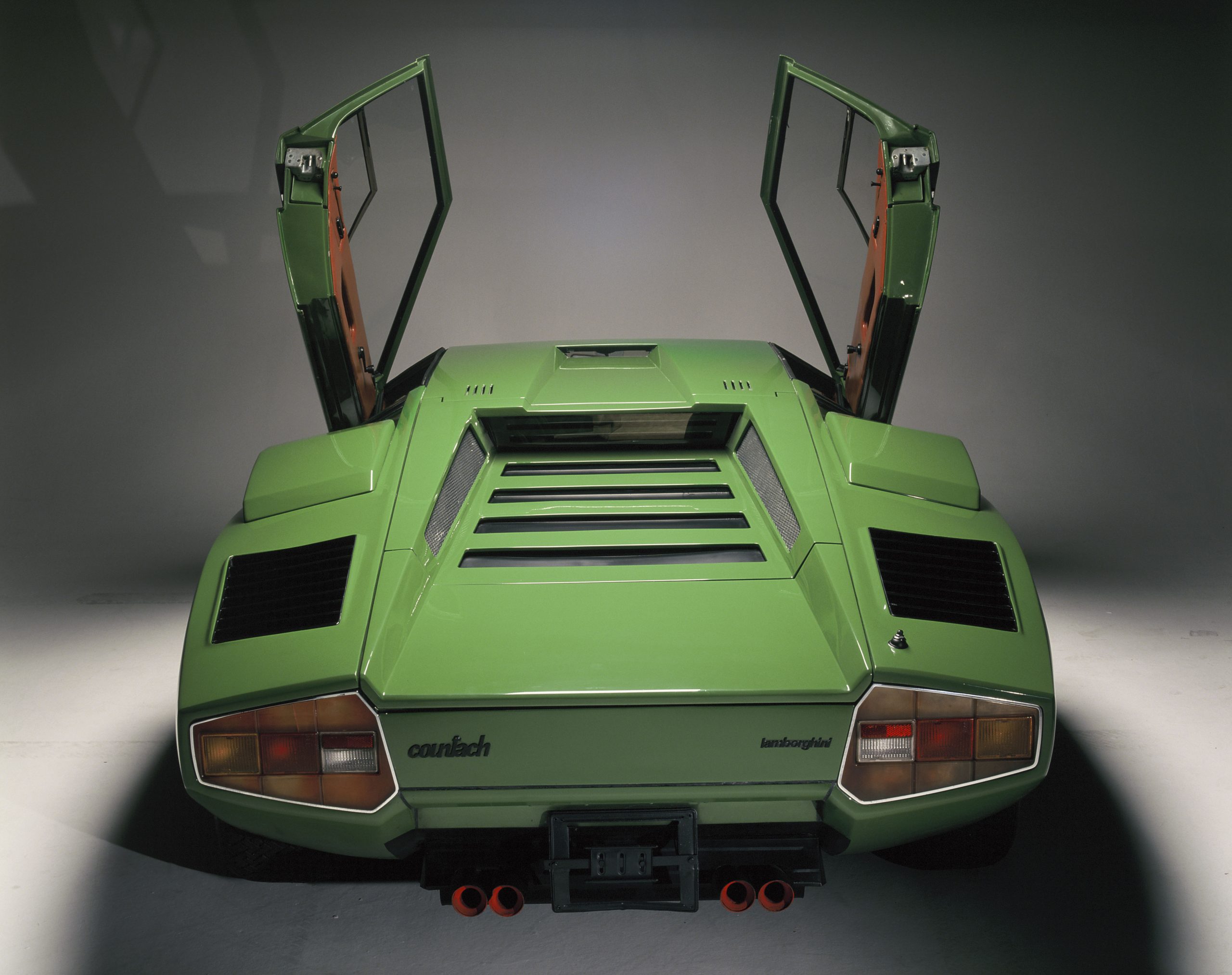 Perhaps it’s because we were born the same year, but the Countach has played a prominent role in my life. I can still picture the sleek, slick grey model that adorned my bedroom wall for so many years. I can also remember seeing one in the flesh for the first time outside a Sydney hotel, being almost speechless with excitement, and then completely dumbfounded to stand next to it and find that the roof barely reached my waist (the tallest point of a Countach is barely a metre off the ground).

When, many years later, I was told I could drive whatever car I’d always desired, but had never sat in, by a car-magazine editor putting together a Bucket List feature, I honestly assumed that everyone else invited would have asked for a Countach as well (some fools asked for a Model T Ford, others a Falcon GT-HO—people are weird).

Actually folding myself, like a butterfly knife, into the immaculate white cabin of the 1986 SV5000 QV model, lent to us by some lucky collector, was like sliding back inside my teenage self on the happiest day of his life. I sat there for a while, just opening and closing that magical scissor door and making strange, sounds of joy and wonder. This seemed appropriate—the magical made-up word “Countach” actually comes from a Piedmontese term “contacc”, uttered by someone who is raptured in awe. According to Lamborghini legend, it’s what was uttered by a styling assistant after he saw the final concept for the first time.

That incredible work was done by the Italian design house, Bertone, and the credit mainly goes to a man called Marcello Gandini. It is a shape with almost no curves—just hard, trapezoidal shapes, sharp edges and a sense that it might want to bite you, or at least cut you to pieces. 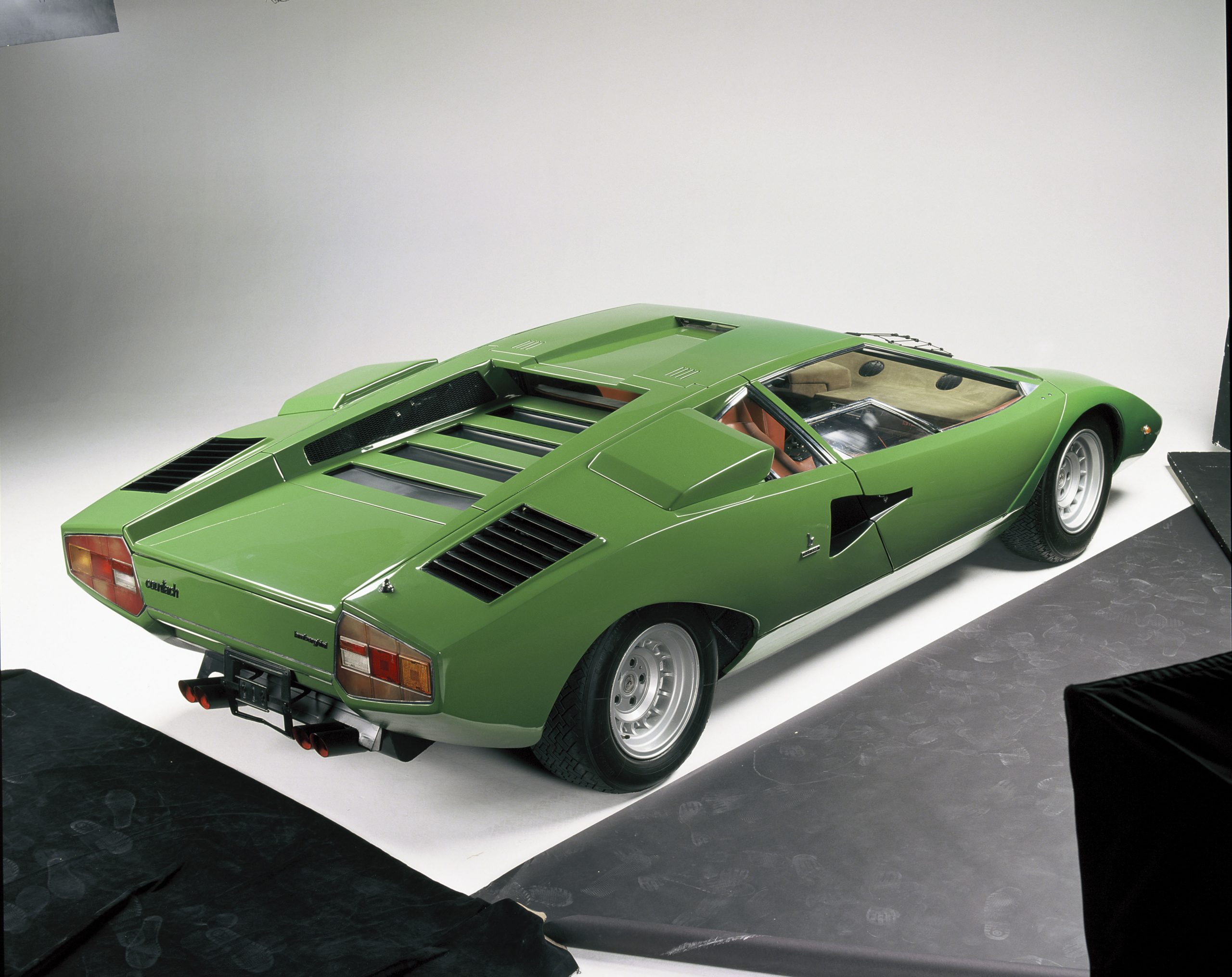 By the time it became a production model, in 1978, the Countach LP400 S had become even more outlandish, and arguably less pure, with wider fender flares, bigger wheels and tyres, and a truly enormous rear wing. And by 1986, when the car I was finally allowed to drive was sold, we had reached the LP5000 QV stage, with that QV representing “Quattrovalvole”. The idea of four valves per cylinder was still exciting at the time, and with that tech attached to its already prodigious 5.2-litre V12 engine, it was now making 335kW and 500Nm, and so much noise that, during my memorable test drive around the Broadford race circuit in Victoria, it sounded like a witch’s cauldron full of mental, metal frogs, each of which had a fire cracker up its rear end.

Design wise, the interior felt dated, obviously, but it was still eye-searing, with that hugely raked windscreen seemingly millimetres from your face, and the fantastic gated manual gearstick glowering manically between the seats.

You might have heard that the Countach was challenging to drive, but, compared to modern cars, that is an understatement of criminal levels. The clutch is so heavy that using it felt like borrowing Chris Hemsworth’s leg-press machine, the steering was even heavier than that and the brakes, while excellent for their time, felt slightly outclassed by the still very impressive acceleration. The gearbox was tough too, but fabulous, because it sounded like you were having a sword fight every time you shifted cogs.

It was also impossible not to notice one of this car’s most unfortunate design flaws—the fact that you can’t see a damn thing in the rear-vision mirror, which
may as well be made of cardboard, or jelly, for all the good it does (okay, to be fair, you can kind of see some bits of metal back there, but certainly nothing useful, like the world behind you).

This, in turn, means that reversing the Lamborghini Countach is a hugely stressful experience, and a bit embarrassing, as you are forced to sit side saddle on the sill, looking down the outside of the car behind you while trying to keep your feet on the pedals and one hand on the wheel. You might think it’s impossible to look uncool in a car like this, but you’d be wrong.

The Countach was a sales success, of course, and allowed Lamborghini to make good on its founder’s bold, Enzo Ferrari-baiting claim. Tractor manufacturer and wealthy industrialist Ferrucio Lamborghini allegedly become unhappy with his collection of temperamental Ferraris and told Enzo he could make a better car himself.

Lamborghini built an ultra-modern factory just down the road from Ferrari HQ and went to work—or hired other clever people to go to work for him.

While there are many iconic Ferraris in the automotive Hall of Fame, you could certainly argue that none of them, on their own, can match the Countach for its brand-enhancing, teen-titillating reputation.

The original plan was that the Countach would be a limited-production vehicle—even the Italians thought it too mad for wider consumption—and Ferrucio himself was reluctant to even include air conditioning in the production car, fearing it might make it seem civilised enough to be bought by mere mortal, unskilled drivers.

Eventually, of course, the world simply demanded more, and slightly more accessible, versions of the Countach, and by the time of its eventual demise—and replacement by the Diablo in 1990—it was filled with leather and mod cons.

To this day—as Lamborghini celebrate a new version of the Countach, the LP-1 800-4—the model remains the jewel in the crown of the marque’s achievements, and the source of inspiration for people like Mitja Borkert, the current head of design of Lamborghini. “There are works of art that always remain contemporary and the shape of the Countach is one of them,” he explains.

“Its design is made of perfect proportions, characterised by a very pure and essential style. Its distinguishing trait is given by a single longitudinal line that visually connects its front with its rear.

“From the stylistic viewpoint, it is a perfect inspiration, because even if we modify the rest, it takes form as an element of visual continuity between the past and the present. It is the summary of the DNA of all of Lamborghini’s design, the tradition of the stylistic language from the origins up until the present day.”

Borkert is absolutely right, because the reason that I love the look of a modern Lambo, like the howling Huracan, is that it carries so many little touches, sharp edges and angry lines, that remind me of the car that made me fall hopelessly in lust with this loudest and maddest of brands many years ago.

And it was that design, of course, that impressed me the most on that golden day when I finally got to make my dreams a reality and drive a Countach.

Yes, as a car, it is flawed, utterly bonkers and intimidatingly difficult to drive, but it remains, now and forever, as one of the most stunning pieces of automotive style we’ve ever been blessed with.

Which made even just sitting in it, occasionally reviving that vast V12 and opening and shutting the door, simply one of the best days ever.

This piece comes from the new Spring Issue – on sale now. Get your copy or subscribe here, or stay up to speed on all things with Robb Report’s weekly luxury insights.