Since 1972, Porsche Design has been guided by the ethos of founder Ferdinand Alexander (F.A.) Porsche, the grandson of Ferdinand Porsche who started the eponymous automaker. The younger namesake once stated that “a formally harmonious product needs no decoration, it should be elevated through pure form,” a missive embraced by the independent design house to this day. Its first celebration of functional yet innovative aesthetics was the watershed Chronograph 1, rocking the watch world with its predominantly black façade. But introducing new stylistic mores was F.A. Porsche’s modus operandi, established with his conceiving the now-iconic Porsche 911 sports car previewed in 1963 and put in production the following year.

Fittingly, the Porsche Design Group—now a subsidiary of Porsche AG—officially announced today that it’s honouring a half-century of operation by putting its stamp on the German marque’s revered model. The tribute will take the form of the 2022 Porsche 911 Edition 50 Years Porsche Design and a one-off 1972 version that’s been fully restored by Porsche Classic. 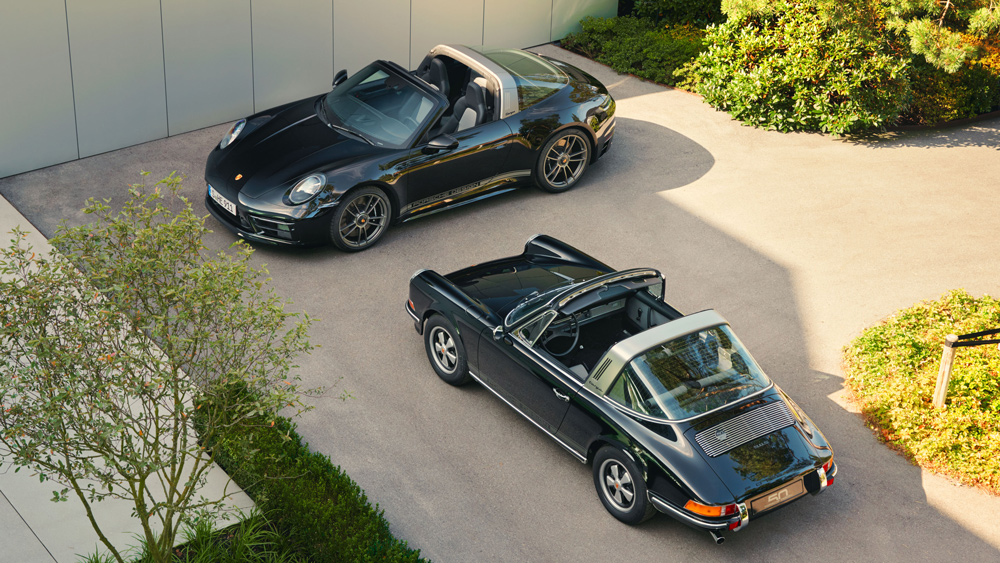 Limited to 750 examples, the 911 Edition 50 Years Porsche Design is based on the current 911 Targa 4 GTS (Gran Turismo Sport), a top-optional iteration equipped with a 473 hp, 3.0-litre twin-turbo flat-six engine making 570Nm of torque. The power train, including Porsche’s eight-speed PDK automatic transmission (a seven-speed manual is also available for the same price), allows the model to cover zero to 97km/h in 3.3 seconds (with the Sport Chrono Package) and top out at 305km/h. And while the tech and performance specs remain the same on the Porsche Design variant, its visual cues are what truly pay homage to the milestone.

On the outside, the car is presented in a choice of either, you guessed it, factory black or Jet Black Metallic—a motif that carries over to the brake callipers and references the original timepiece. A platinum colour scheme has been selected for the accents, such as the roof structure’s Targa bar and the rims on the 20- and 21-inch 911 Turbo S wheels (front and rear, respectively). 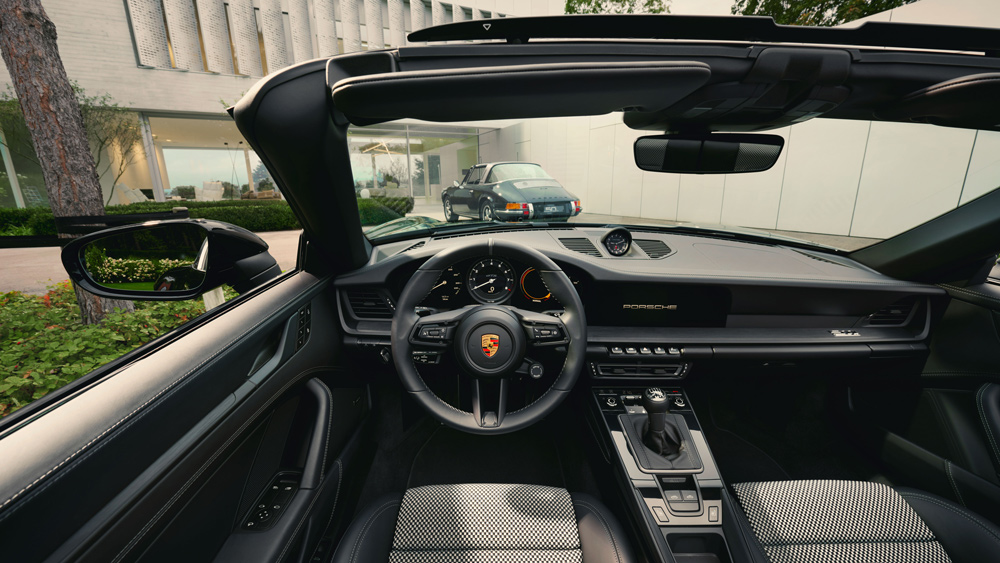 Inside, the Chronograph 1 theme continues with the standard Sport Chrono Package’s dashboard clock showing off a red second hand, and the 18-way electronically adjustable seats wearing black leather with inserts in the automaker’s checkered fabric known as Pepita. There’s also embossed anniversary logos and distinct badging that further denote exclusivity, as does a representation of F.A. Porsche’s signature on the centre console. Open for orders, the 911 Edition 50 Years Porsche Design is priced at $426,900. 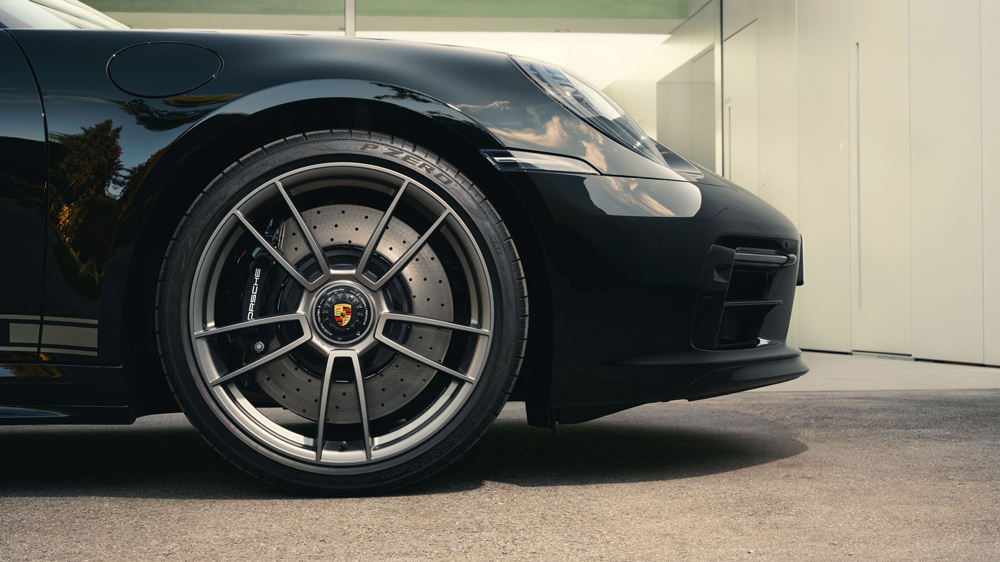 Black brake calipers accent the platinum-colored rims of the 20- and 21-inch 911 Turbo S wheels (front and back, respectively). Photo: Courtesy of Porsche Design.

Complementing the commemorative Targa 4 GTS is a 1972 flashback, a 911 S 2.4 Targa that benefitted from a two-year restoration. “Our general philosophy in a factory restoration project is to restore the vehicles to be as faithful to the originals as possible,” mentioned Uwe Makrutzki, head of Porsche Classic, in the official statement. He went on to add that his team “deliberately took a different approach with this project. We’ve created a unique vehicle that blends tradition and present day . . .” 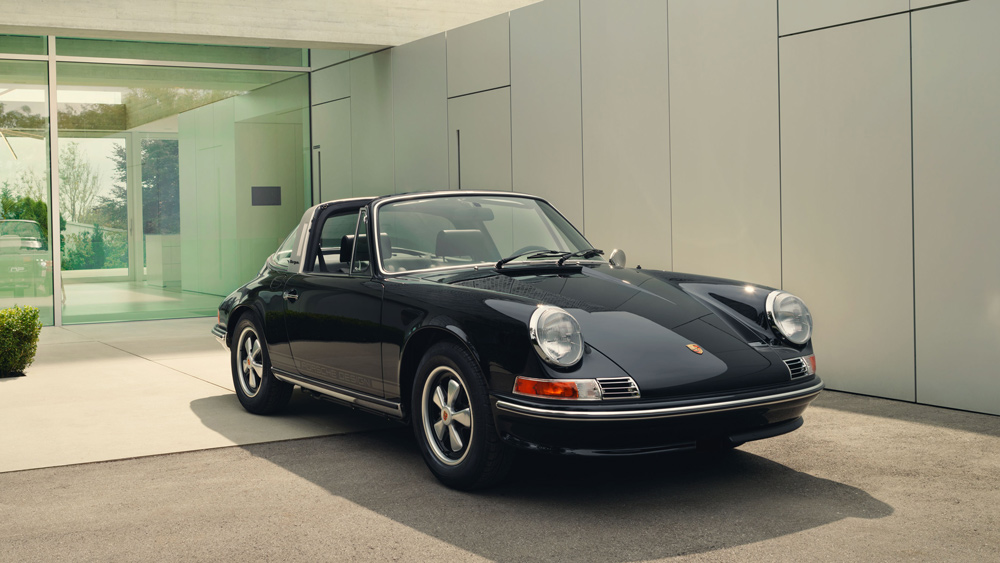 Also dressed in the same obsidian-like hue throughout, the resurrected ride was built from a donor 911 T 2.4 Targa, the “T” denoting “touring” and the “Targa” moniker a nod to Italy’s infamous Targa Florio endurance race—a contest where Porsche placed first on four separate occasions.  During the painstaking reimagining, the car was brought up to “S” (sport) configuration, necessitating a power-train enhancement comprising a 2,341 cc flat-six generating 140kW. 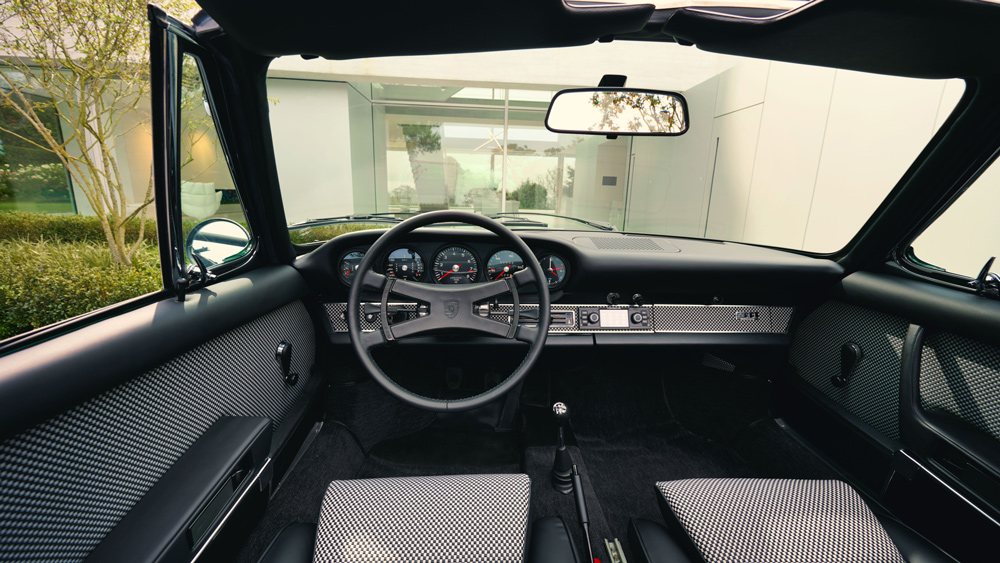 The Seventies looker closely follows the trim direction of its modern commemorative sibling and its obeisance to the atelier’s premiere watch. This is evidenced by the black-and-platinum presentation, similar badging and embossing as well as the same facsimile of F.A. Porsche’s John Hancock. Due to the singular nature of the vehicle, it will be available solely through a yet to be finalised channel. 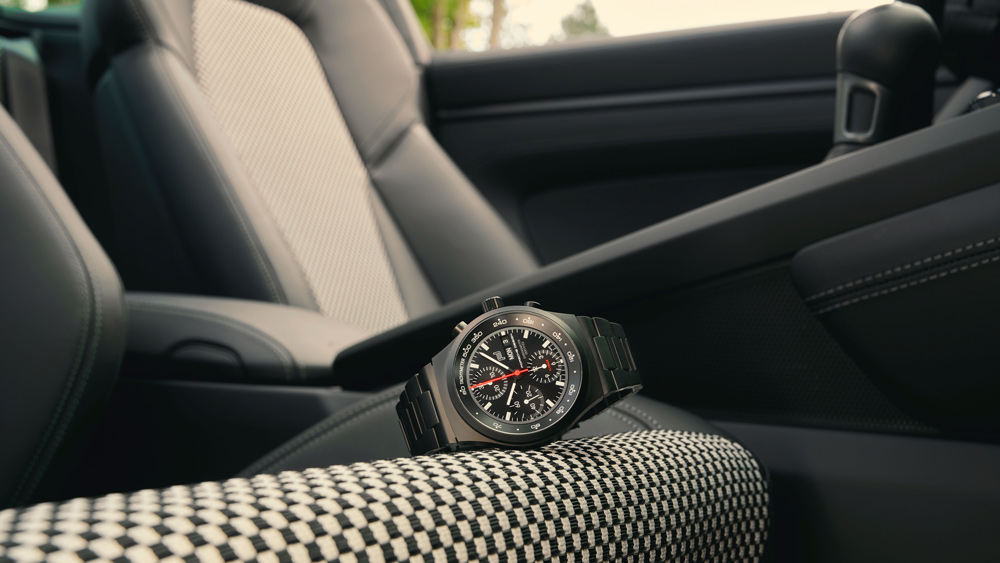 The Chronograph 1 – 911 Edition 50Y Porsche Design timepiece will only be available to owners of the limited-edition car. Photo: Courtesy of Porsche Design.

As to be expected, Porsche Design, which has expanded its product portfolio to include everything from sunglasses to kitchen appliances to sound systems, will also recognize its five decades of business with two revised versions of the timepiece that started it all. The Chronograph 1 – 1972 Edition will be limited to 500 examples for the public, and the Chronograph 1 – 911 Edition 50Y Porsche Design will only be supplied to the 750 owners of the new Targa tribute as part of the package. Considering that Porsches remain among the most sought-after collector cars today, it’s a fair assumption that enthusiasts won’t waste a minute on securing these new automotive prospects and their associated wrist candy.