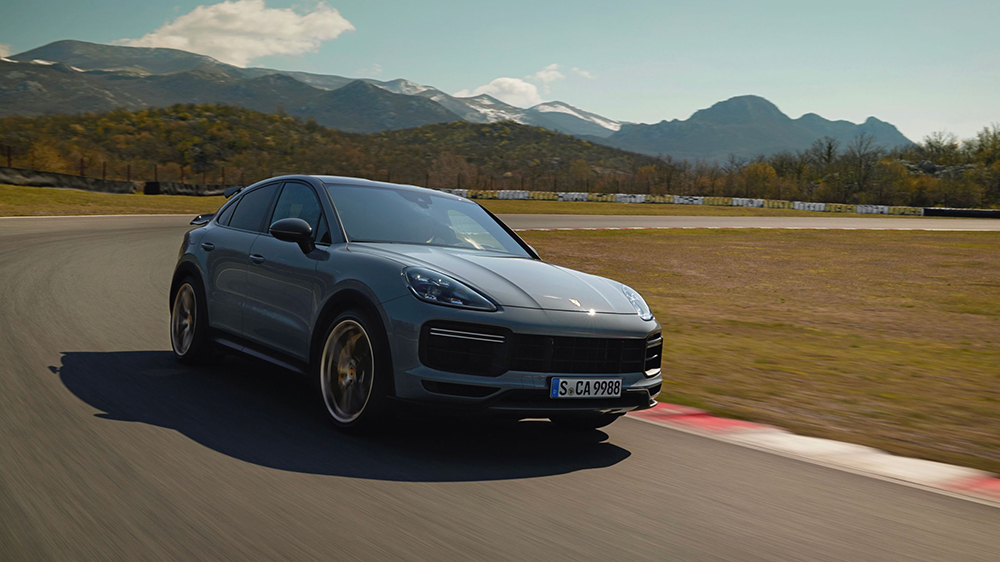 The SUV’s brawny engine was inside the Turbo GT that recently circled the Nürburgring in a record 7:38.925.

Only a couple weeks after it was first teased, we finally know the name of Porsche’s record-breaking Cayenne variant—the Turbo GT.

The German luxury marque officially unveiled the latest high-performance version of its popular SUV on Tuesday evening.  But the vehicle isn’t just a beast by Cayenne standards, it’s also the brand’s most powerful V-8 yet. 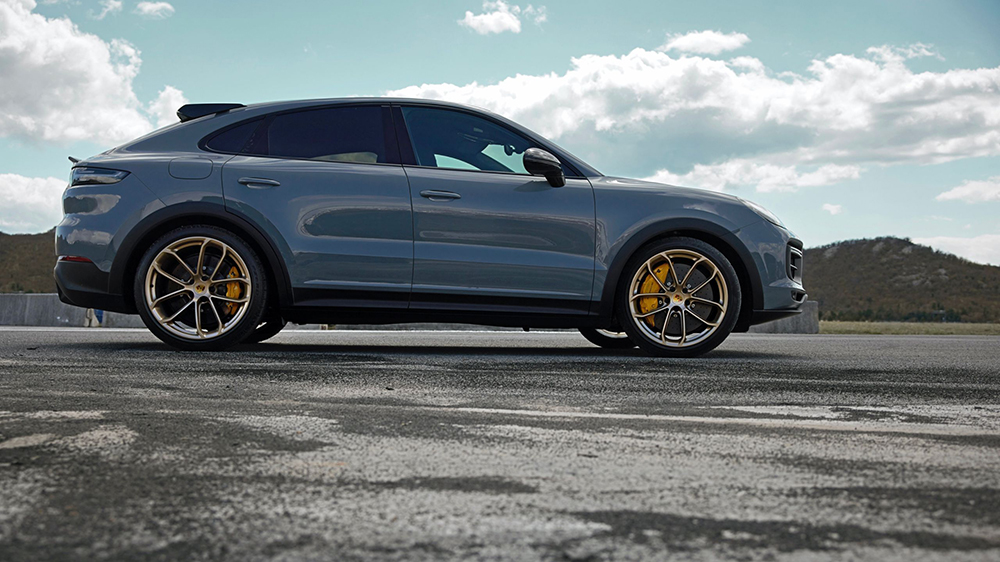 Considering that Porsche revealed the newest Cayenne’s Nürburgring Nordschleife time before announcing its name, we had a feeling something special would be lurking under its hood. And sure enough the automaker has outfitted the vehicle with a monstrous 4.0-litre twin-turbocharged V-8 with an upgraded crankshaft, connecting rods and pistons, according to a press release. Mated to an eight-speed automatic, the engine can generate 470kW and 849Nm of torque—67kW and 80kW more than the previous top-tier Turbo Coupé. It’s technically less powerful than the Turbo S Hybrid variant, but that version has an electric motor assisting its 403kW twin-turbocharged V-8. Still, the Turbo GT is even faster, able to launch from zero to 97km/h in 3.1 seconds, cover the quarter-mile in 11.6 second and reach a top speed of 315km/h

More importantly, as far as Porsche is concerned, the brawny V-8 engine was inside the Turbo GT driven by Lars Kern that recently circled the Nürburgring—or the “Green Hell,” as it is more affectionately known—in 7:38.925. That time, which was posted just over two weeks ago, makes the Turbo GT the fastest “SUV, off-road vehicle, van, pick-up” in the track’s history. 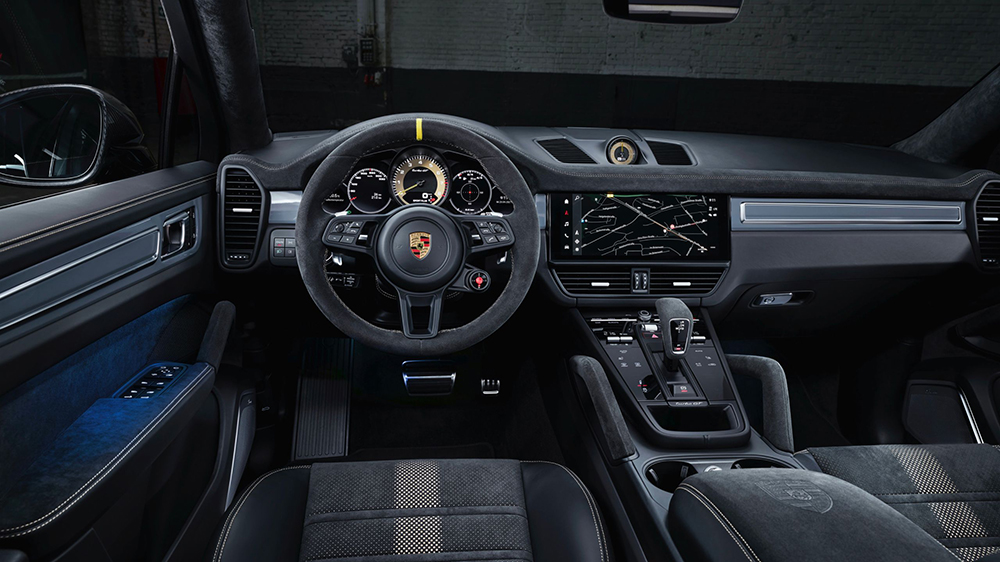 Inside the Cayenne Turbo GT Porsche

The engine isn’t the only thing that separates the Turbo GT from the rest of the Cayenne range. The SUV sits 0.3 inches lower and has its front wheels positioned a full inch wider than the Turbo Coupé. It also features a slightly revised front fascia, wider air intakes, carbon-fibre roof and diffuser, a titanium exhaust system, an upper rear wing, and it rides on a set of 22-inch wheels wrapped in Pirelli P Zero Corsa tires. One thing to note: The variant will only be available as a coupé. In our opinion, that’s a virtue, not a flaw.

Inside the car, you’ll find Porsche’s brand-new infotainment system, which features both Android Auto and Apple Car Play. The front sport seats and rear seats have special Alcantara insets and Turbo GT script along the headrests. There’s also unique stitching and a yellow marker at 12 o’clock on the steering wheel. Rounding out the luxe interior is a 10-speaker sound system. 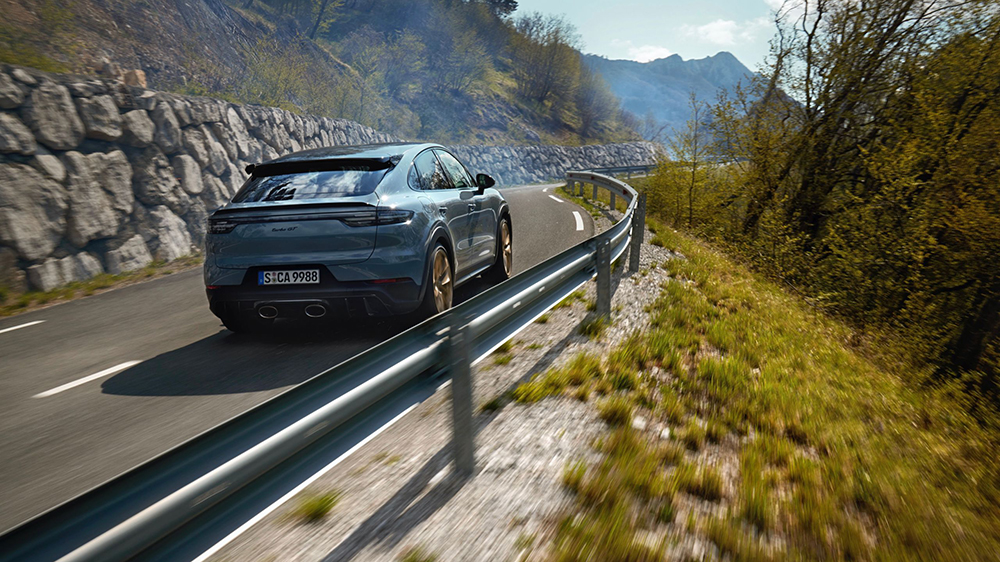 As you may have guessed, the Cayenne Turbo GT will come at a premium. Porsche has said that the SUV will arrive in Australia in the fourth quarter of 2021, priced from $336,100.