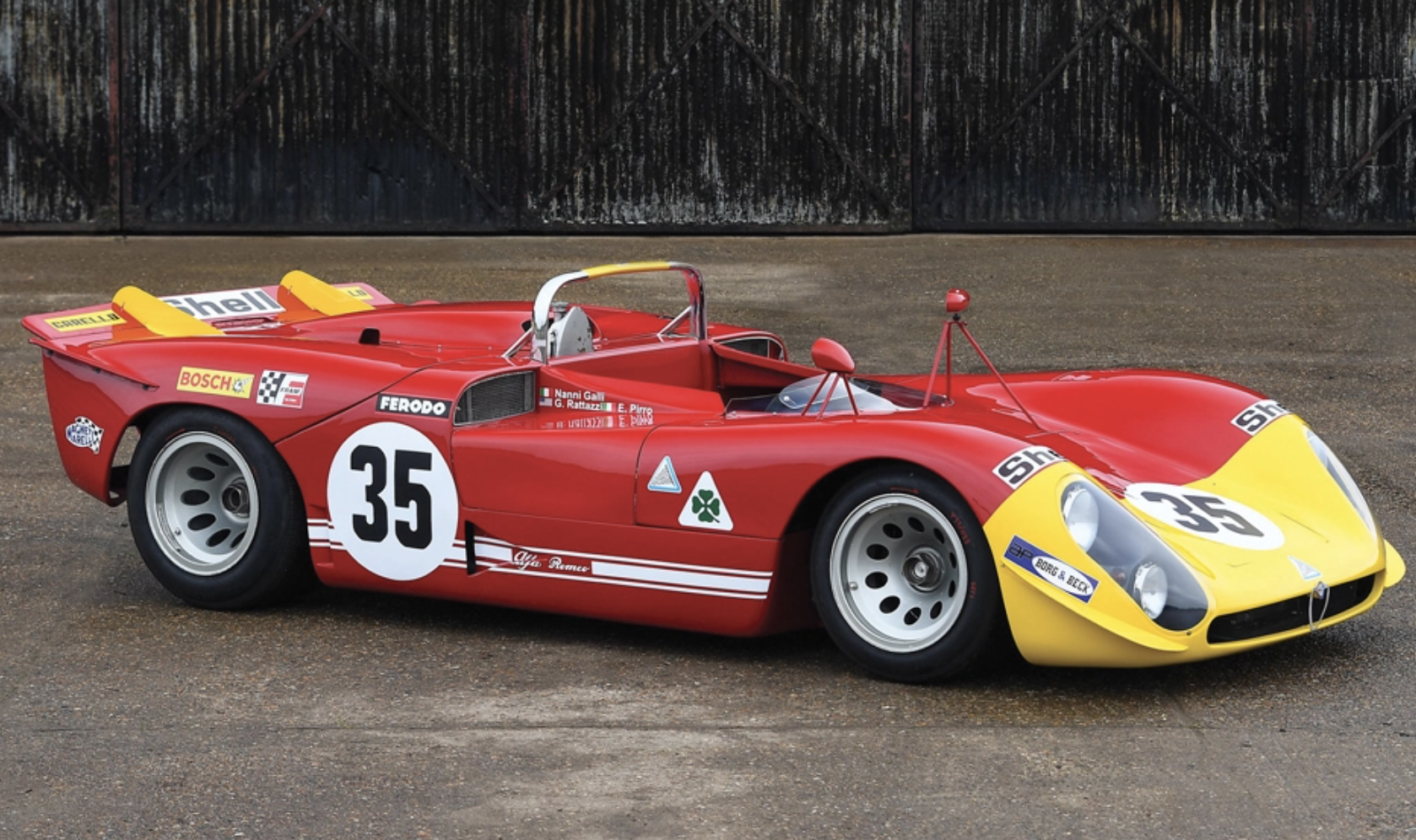 Reel back the years to the 1970s, and Alfa Romeo was a force with which to be reckoned in motorsport. In its heyday, its Tipo 33 (in all its iterations) was a holy terror, raced indefatigably from 1967 and until 1977. Of course, every card-carrying Alfa enthusiast pledges allegiance to the Stradale 33, the road-going variant of the early race car, of which a mere 18 were made between 1967 and 1969. On the track, things were intense, with Alfa Romeo often prevailing. Importantly, the Alfa Romeo 33TT12 won the World Championship of Makes in 1975, and the later version won the 1977 World Championship for Sports Cars, taking first place in all eight of the championship races.

The Tipo 33 had a fascinating evolution, beginning with a straight-four engine in the exquisite TZ2, and quickly transitioning to a 2.0-litre V-8 developed by Alfa’s racing subsidiary Autodelta. Engines increased in displacement over the years, and the 3.0-litre V-8 in the Tipo 33/3 matched Alfa’s cloverleaf with Porsche’s 908 and Ferrari’s 312P. 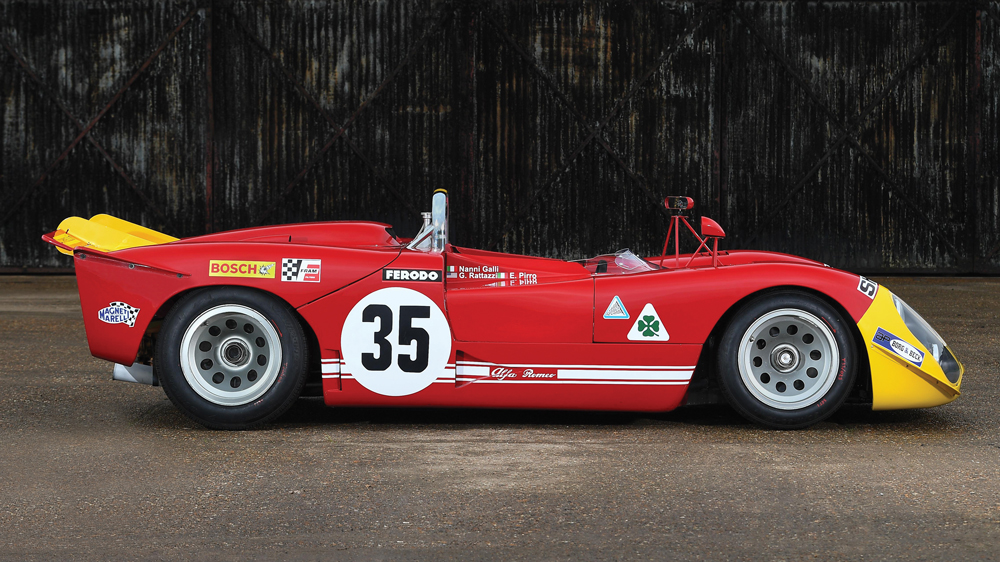 With its power plant mounted midships, the Tipo 33/3 was clothed in an elegant shape that only an Italian carmaker like Alfa Romeo could envision. By 1967, Italian racing competition like Bizzarrini, Lancia and Maserati were mostly relegated to history, while Lamborghini was MIA in motorsport, and Ferrari was busy pitting its V-12s against Ford’s V-8-powered machines. (Ferrari often lost.) Victory in various quarters, as noted above, was finally assured with Alfa Romeo’s 3.0-litre flat-12 engine, a story for another time.

That was then, and this is now, when the sixth biennial RM Sotheby’s Monaco auction brings together a number of Formula 1 and Le Mans race cars at the Grimaldi Forum on May 14, including a stunning Alfa Romeo Tipo 33/3. The Tipo 33/3 is the most beautiful of them all—apart from the Stradale 33. It debuted in 1969 at Sebring, making an impressive 400 hp but placing only seventh in the 1969 International Championship for Makes. Undaunted, Alfa pressed on and, in 1971, achieved numerous class wins. Meanwhile, its race car became a movie star, adding another shade of red to the racing grid for Steve McQueen’s 1971 film Le Mans. 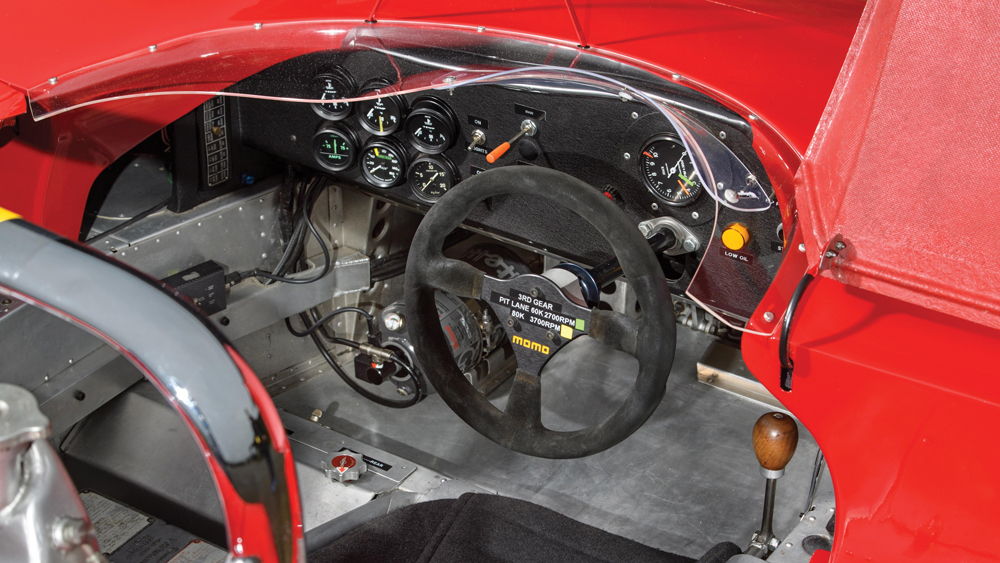 Piloted by Nanni Galli, the car held second place for much of the 1970 edition of the 24 Hours of Le Mans, but did not finish. Photo by Tim Scott, courtesy of RM Sotheby’s.

The Alfa Romeo on offer is the car from the movie, but importantly, it also competed in the 24 Hours of Le Mans in 1970. It was built by Autodelta and raced by Nanni Galli (who died in 2019) running a comfortable second place for much of the race, but eventually retiring. Sold to its first private collector in 1973, this Tipo 33/3 has had only four individual owners from new and received a comprehensive rebuild in 2020, with maintenance invoices exceeding $900,000 during its current stewardship. It is estimated to fetch between $2.49 million and $3.05 million.