Sitting just inside the entrance of the Petersen Automotive Museum in Los Angeles is the Czinger 21C, an approx. $2.7 million hybrid hypercar boasting Formula 1 technology and a laundry list of impressive specs. With its dramatic, swoopy curves, aggressive front splitter and imposing rear wing, the 21C could, at first glance, be dismissed as yet another piece of vaporware from a boutique car maker selling a pipe dream to eager collectors. But for Czinger Vehicles founder Kevin Czinger, the 21C represents the future of automotive construction.

“The idea of this was really a new brand—100 per cent American—invented, designed and manufactured based on the world’s first full digital production system and intended to represent the apex of that technology,” he tells Robb Report at a small briefing around the car. 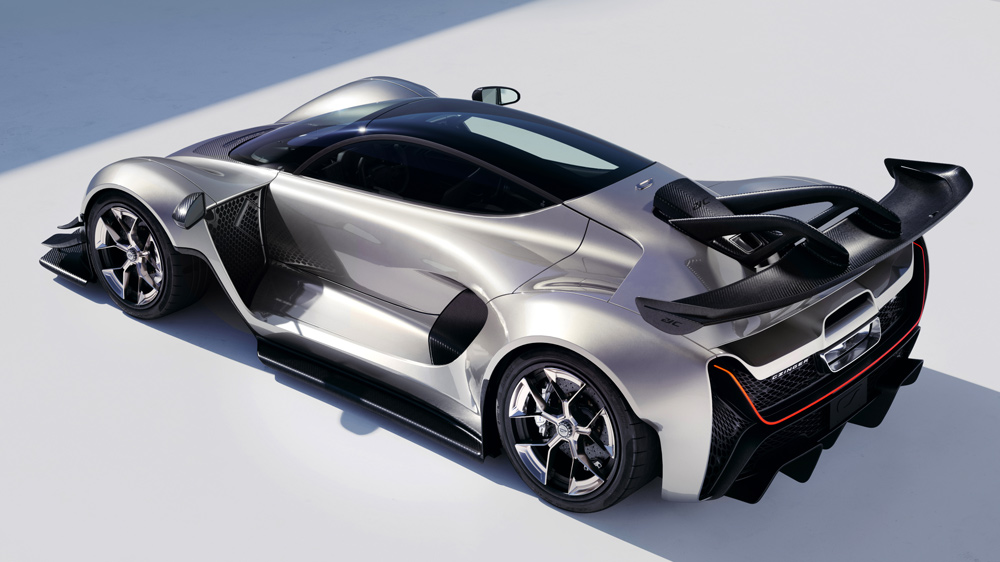 The 21C is the halo atop Czinger’s vision. It cranks out 932kW and can go from zero to 100km/h in just 1.9 seconds, thanks to a nearly 2.9-litre, twin-turbocharged V-8 combined with an electric motor on each front wheel and two small battery packs derived from Formula 1. Shifts come from a seven-speed, automated manual transmission. Two variants of the model are available: a low-drag iteration and a lightweight, high-downforce version. Czinger claims that his 21C, which has a dry weight of about 1240kg (and about 1320kg with fluids), has the best power-to-weight ratio of any production car. It will be homologated in North America and Europe, as well as other specialty markets, and will be limited to 80 examples.

Czinger, a Yale Law School graduate with a rigid stance and an intense tone that’s more West Point than New Haven, points to jets rather than cars as his early inspirations. Czinger tells us his team of 150 people is modelled after Lockheed Skunkworks, the aerospace company’s advanced development program—first led by engineer Kelly Johnson—that produced cutting-edge military aircraft including the SR-71 Blackbird spy plane during the Cold War. 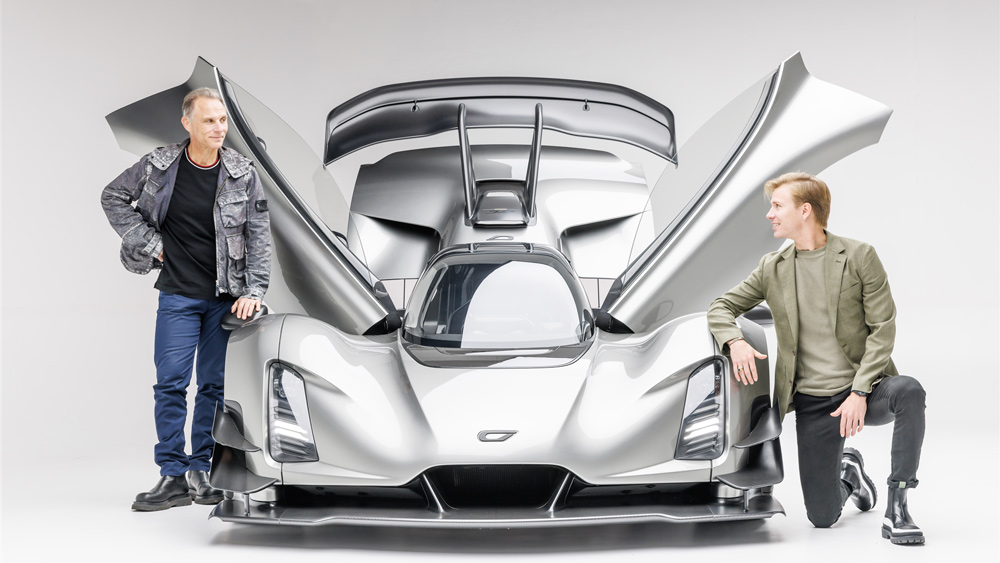 Czinger Vehicles founder Kevin Czinger (left) and his son Lukas, who is the vice president of Operations, Automation and Manufacturing for the company. Photo by Ted Seven, courtesy of Czinger Vehicles.

Much of the 21C, including the engine, was developed in-house, down to the hardware and software stack. Czinger says the vehicle contains parts or systems from about 500 patent filings, with around 130 of those patents officially granted. And Czinger hired Dave O’Connell, a 25-year veteran at Mitsubishi, to lead design efforts with a team of only 6 people. (The average automotive design studio typically employs dozens, or even hundreds of people.)

When asked why he chose to fit the 21C with a combustion engine instead of going all electric, Czinger notes, “We are power-train agnostic, and we say there should always be a diversity of approaches. We need to think more about the entire manufacturing process and not just the tailpipe emissions.” 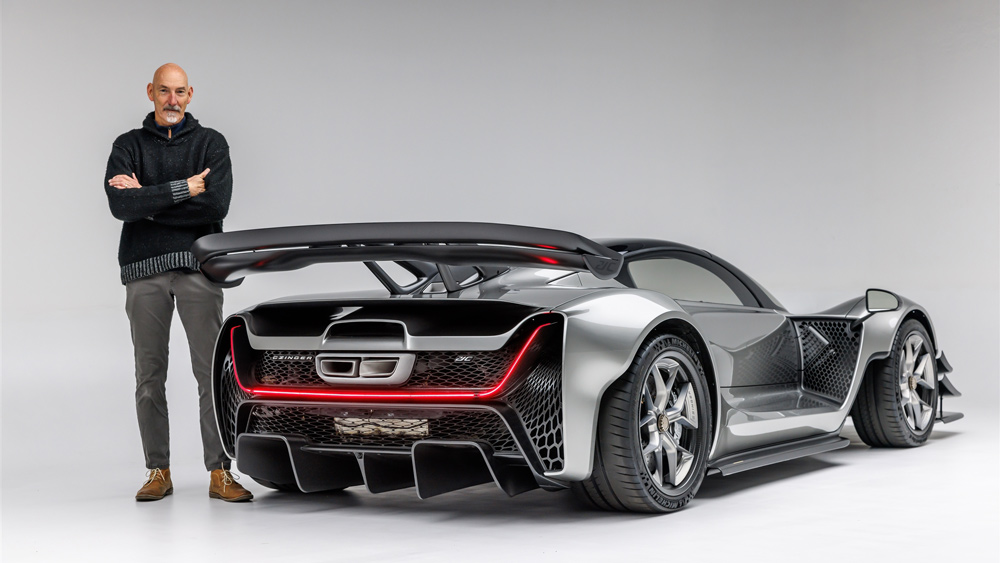 But what really sets the 21C apart is how it’s built. Comprising multiple materials, the car is 3-D printed with the use of automated, artificial intelligence–based software. This is accomplished via majority owner Divergent, Czinger’s technology company focused on digital manufacturing.

Located in Torrance, Calif., amongst the industrial complexes that once housed much of the aerospace industry, Divergent aims to replace huge, centralized automotive production facilities with smaller, localized centres that can print a variety of parts on demand, allowing greater agility and flexibility.

“We do this all without tooling or stamping. It frees up the design from manufacturing constraints, and what we will do is provide our tools to people as a licensed application and provide them with on-demand production,” says Czinger. He also aims to do it with zero waste. 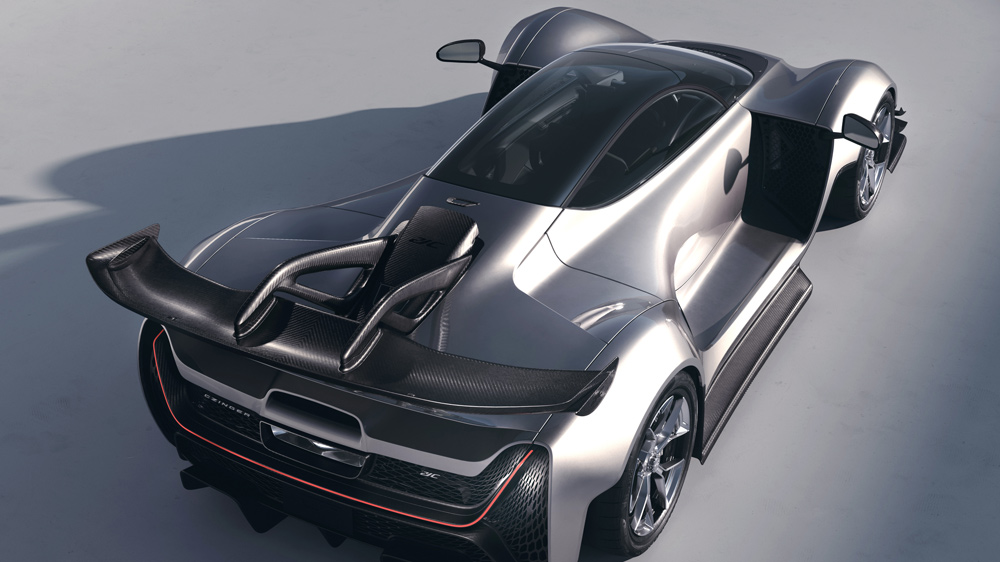 The 21C will be limited to 80 examples. Photo: Courtesy of Czinger Vehicles.

It’s not quite clear from our visit how Czinger will meet its customers’ demands or how it will take its technology mainstream. When asked how long it takes to produce one 21C, Czinger gives no clear answer. “Every single car is different,” he says. To questions about the parts, tools and processes, he responds, “You’ll have to sign an NDA and come to the factory.”

Czinger does confirm that his company is working on securing a dealer network and that 21C deliveries are slated to begin in 2023. And more models are on the way. “We are going to show next a four-seat GT vehicle at Pebble Beach and then a whole series of ultimate performance vehicles in different segments. The digital revolution that the industry thought would happen in 15 to 20 years is going to happen only in a few years—starting right now.”