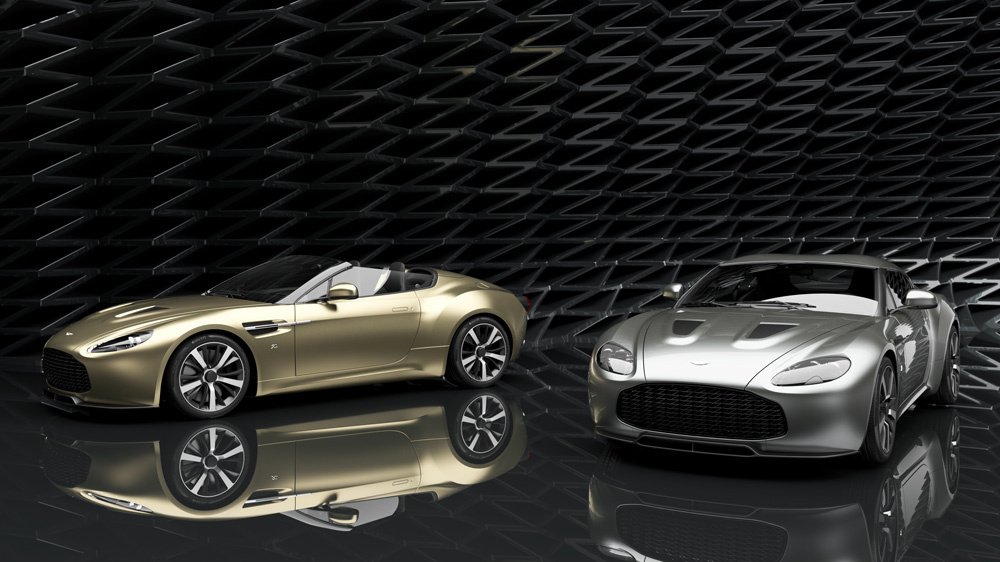 A new twin-set of Vantage V12 Zagato Heritage models are on the horizon.

The collaboration of two legendary names, Aston Martin and Italian coachbuilder Zagato, has brought forth some of the most stunning sports cars ever to wear the scarab wings. Both companies have greater than a century of accomplishments under their respective belts; Aston Martin was founded in 1913 and Zagato celebrated its centenary in 2019, making it the oldest carrozzeria in the world.

Their long history of collaboration began 60 years ago with the Aston Martin DB4 GT Zagato, designed by Ercole Spada and made from 1960 through 1963. Beautiful and purpose-built for competition, it was designed to race at Le Mans and similar circuits against the likes of Ferrari’s 250 GTO and other hot rods of the era. About that car, Andrea Zagato—the eponymous coachbuilder’s CEO, says, “We were fortunate to create one of the most iconic Aston Martins ever made. The DB4 GTZ represents the pinnacle of the Zagato Granturismo decade.” Only 19 were constructed, and today, it is the most valuable Aston Martin of them all.

That collaboration was just the beginning. Notes Zagato: “Aston Martin was the most supportive partner in our second 50 years.” Indeed, Aston Martin’s Zagato connection bore more fruit during the 1980s with a big, luxurious V8 GT. And in the early 2000s, Zagato clothed the DB7 platform as an exquisite coupe and the AR1 roadster. In 2011, a Vantage V12 Zagato turned heads with its inimitable double-bubble roof and curves so gorgeous they should have been illegal.

Such was the inspiration for the Vantage V12 Zagato Heritage Twins, built under license from Aston Martin by bespoke manufacturer R-Reforged at the constructor’s new facility in Warwick, UK. R-Reforged is part of AF Racing Group, which works as project partners on the Aston Martin Valkyrie.

The Vantage V12 Zagato Heritage Twins built by R-Reforged in partnership with Aston Martin and Zagato. Photo: Courtesy of R-Reforged.

Both companies were founded by life-long Aston Martin fan, Dr Andreas Baenziger and his business partner Dr Florian Kamelger. Some time ago, Baenziger acquired a Zagato car and quickly formed a warm relationship with Andrea and Marella Zagato, resulting in their joint venture to manufacture 19 sets of the Twins. While Zagato revised the original Coupé design and created an entirely new Speedster, R-Reforged assumed responsibility for the engineering, development and eventual manufacture of all 38 vehicles.

Analyzing the 2011 original, Zagato remarks, “It is an elegant and brutal design, which reflects the great balance between race performance and pure Aston Martin style. The V12 Heritage Coupé and Speedster retain the original clean surfaces of the pure Zagato design while adding some styling details. No major changes were made, but many significant tweaks.”

Careful to distinguish roles, Zagato elaborates, “We are ‘case designers’ and we have always concentrated on the body shape and not on the mechanics. Our main task is to fully respect the OEM package.” That OEM package presents opportunities for significant improvement since the 2011 Vantage V12 Zagato was conceived. Made through 2018, the final V12 Vantage S was the ultimate iteration, some arguing that, equipped with the available 7-speed manual transmission, it represents the last true “analogue” V-12 sports car.

R-Reforged’s engineering director, Adam Donfrancesco, is no stranger to Aston Martin, having been a lead engineer on the AM Special Projects’ Vantage GT8 and GT12. A specialist in the manufacture of low-volume performance cars, Donfrancesco leads the team that developed the Twins, making substantial advances in every arena. We caught up with him at the factory by videoconference, with a couple of builds underway even during the lockdown.

Inside the Coupé. Photo: Courtesy of R-Reforged.

Donfrancesco began by outlining the process. “We are currently acquiring donor cars. We have some zero-mileage vehicles, and some with super-low mileage to make up the nearly 40 cars we’re creating.”

And those cars, while bearing a superficial resemblance to the original coupe, are different beasts entirely. Donfrancesco elaborated, “The coupe is very similar to the original, but with significant changes. We’re fully bodying the car in carbon fibre as opposed to aluminium like the previous model.”

Additionally, the Coupé and the Speedster feature 19-inch centre-lock wheels, revised fenders, new front bumpers with even greater visual impact, and active aero systems at the rear. Importantly, their 5.9-litre, 48-valve V-12 engine has been tuned to deliver 600 hp—85 hp more than the original and, according to Donfrancesco, “upping it to the GT12 level of performance, with revised inlet manifolds, titanium exhaust and so forth—it’s going to make a great vehicle.”

About the decision to go with composite technology, Zagato explains, “Carbon fibre is much more functional than hand-beaten aluminium for both one-offs and few-offs. The final surface is much more accurate and therefore respectful of our CAD design, and the existence of moulds allows the quick manufacturing and replacement of parts. Modern donor cars are geometrically much more precise than ten or twenty years ago. Given these circumstances, my grandfather would have made the same choice.”

Thanks to its carbon-fibre body, added power, and no roof mechanism, the Speedster is, according to Donfrancesco, “a new thing entirely. Efficient and lean, the Speedster could be a nice surprise. There’s a chance here to get perhaps the lightest Vantage road car ever—and with a seven-speed manual transmission—it’s going to be a pretty cool piece of kit.”

Donfrancesco sums it up: “The beauty of being a bespoke manufacturer is that we can be flexible and tailor our approach to the customer. We can push the boundaries a bit. We can give them an extra experience and involvement with the specification of their cars.”

The Twins will be priced at more than $3.1 million, and the first pair—as specified by Marella Rivolta Zagato—will be finished at the end of this winter.