Like many luxury automakers these days, Lexus is electrifying its lineup, and it now has the prototype to prove it.

On Tuesday, the Japanese marque unveiled the LF-Z Electrified concept car. The prototype isn’t a preview of a specific model per se, but it is meant to offer a glimpse of what the company’s electrification efforts will look like going forward. 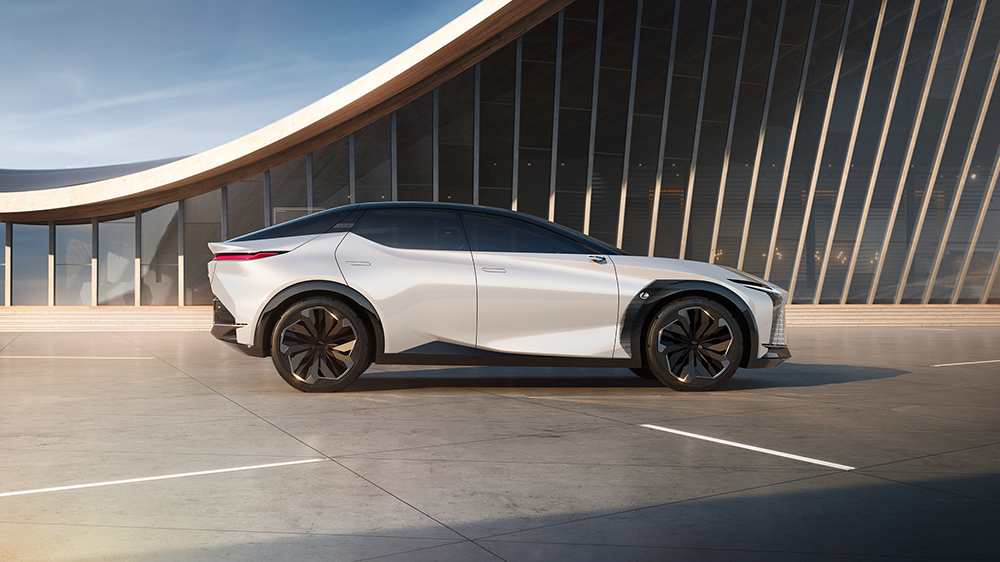 And if this is what Lexus’s EVs will look like, some sleek vehicles will be coming to market at some point. The Blade Runner-esque LF-Z is a crossover, with traces of a sedan, hatchback and SUV all present in its body. It has a smooth shape with flowing lines running from the spindle-shaped grille all the way to its rear lip spoiler. An electrochromic glass roof is bisected by a blue stripe and gives the car a sharp two-tone colour scheme, while LED strip lighting, illuminated badging, side-view mirror cameras, and extra-large rims give the car some attitude. It’s similar to the LF-30 Electrified concept the company debuted in 2019, only a tad more realistic. We do miss that prototype’s gull-wing doors, though. 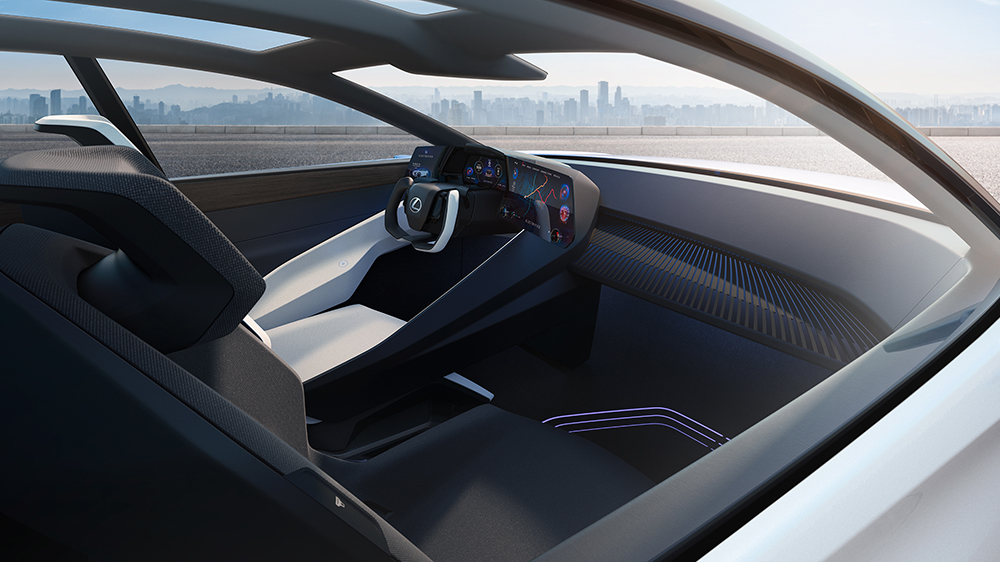 Inside the LF-Z Electrified Lexus

Inside the LF-Z, Lexus has gone for a bold and minimal look. It’s not feature-packed, like the interior of the Mercedes-Benz EQS, but it still stands out. This is especially true of the driver’s cockpit, which has a three-screen set-up behind the yoke-style steering wheel.

The layout has more in common with the control panels on a fighter jet than the infotainment systems you find in most vehicles. The system will feature artificial intelligence technology that will learn from your preferences and behavioural characteristics and will adjust to you and your driving style over time. There’s also a digital key feature, that allows you to authorize other drivers without having to pass off the physical key. Finally, the glass roof that looks so cool from the outside is even better from the inside, offering unobstructed, panoramic views of your surroundings as you drive. 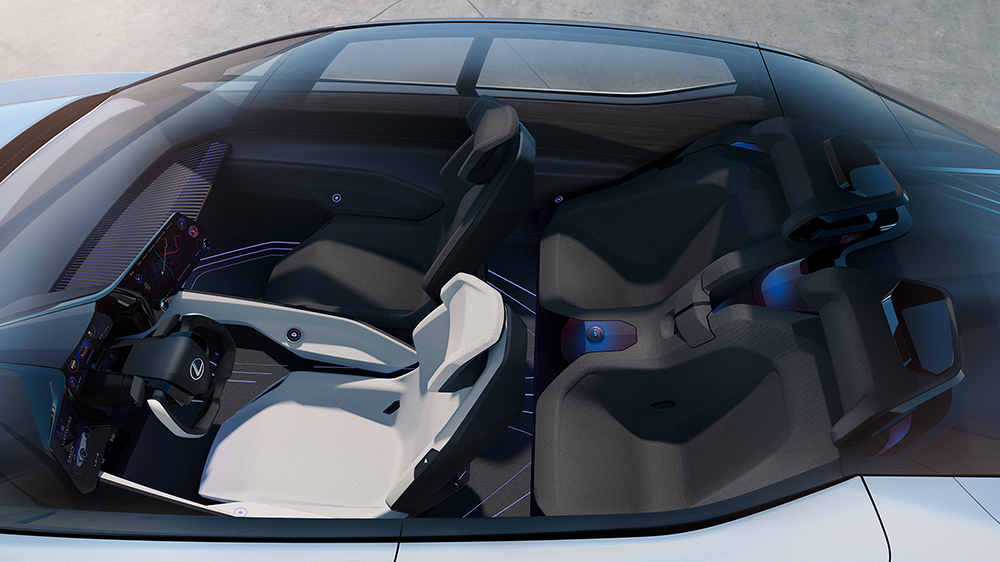 From a technical standpoint, details are pretty scant. The LF-Z will be battery-powered, of course, but that’s the extent of what we know about its zero-emission powertrain. The concept does feature the brand’s new “Direct4” all-wheel-drive system, though, which allows you to apply different amounts of torque to each axle. That way, you can choose a drive system that’s best for the moment (toggling between front- and rear-wheel-drive, for example). The car also offers steer-by-wire technology, which eliminates the need for a mechanical connection through the steering shaft, resulting quicker, more precise handling. 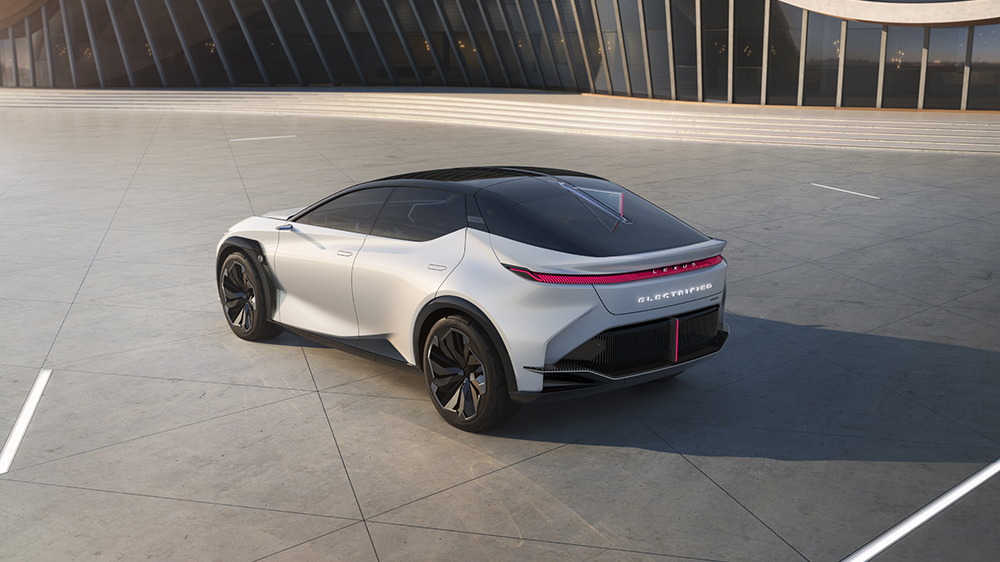 Lexus has already said the LF-Z won’t make it past the prototype stage. But you can expect to see elements from the car filter out into the brand’s future electrified vehicles. And there will be plenty of those coming up. Unlike some of its competitors, Lexus won’t stop selling vehicles with internal combustion engines anytime soon, but it does intend to introduce 20 electrified vehicles by 2025, including an electric-assisted version of each of its models in its current lineup.

Price, essentially, is upon request. Restomods of the 1980s supercar can cost more than $3 million.

The Iceman’s Formula 1 car is heading to auction.

A sign of things to come — get behind the wheel of the Mission R concept.

Most EV owners have relatively short commutes, so car companies are focused on function, not distance.

The coveted continuation model is limited to just 16 examples.

The top-tier model’s final performance before its electric overhaul.

Lotus Plans 4 EVs Over The Next 4 Years

The models are part of Lotus’s plan to become a global EV powerhouse.