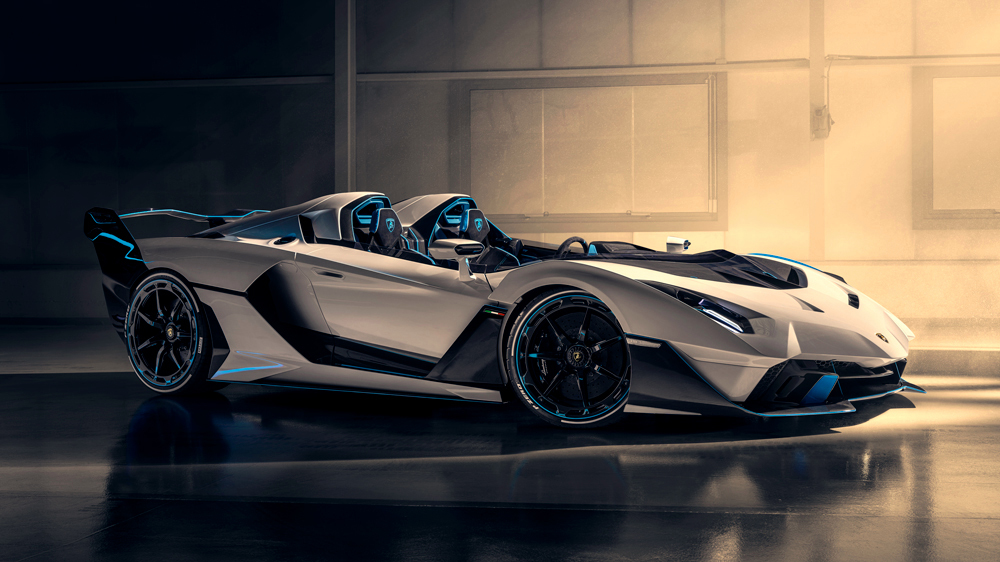 The 565kW model was developed by the marque’s Squadra Corse motorsport division.

It’s been less than five months since Automobili Lamborghini unveiled the 611kW Essenza SCV12, its most powerful production model to date, and yet the team at Sant’Agata Bolognese has released yet another bull today, the topless Lamborghini SC20. Like the Essenza, the SC20 was developed in collaboration with the Italian marque’s Squadra Corse motorsport division, but differs from its 40-model-run stablemate in that this Lamborghini roadster is a customer-commissioned one-off.

Although intended for the track, the machine is street-legal and carries Lambo’s apex engine, the same naturally aspirated 6.5-litre V-12 as the Essenza, though detuned to deliver 565kW at 8,500 rpm and 720Nm of torque at 6,750 rpm. The power plant is mated to the automaker’s seven-speed Independent Shifting Rod (ISR) transmission, claimed to execute gear changes in 50 milliseconds; performance measurements such as top speed and rate of acceleration have yet to be released. 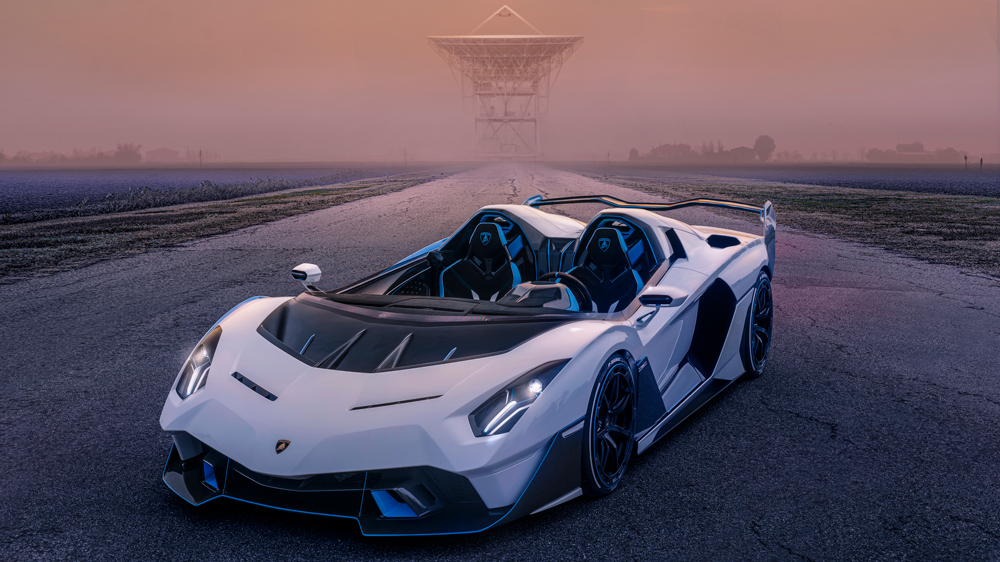 When it comes to form, the four-wheel-drive SC20 shares the same DNA as the 1999 Diablo VT, the 2005 Concept S (envisioned by Luc Donckerwolke, now with Genesis), the 2012 Aventador J and the 2014 Veneno Roadster. And its exclusivity mirrors that of Squadra Corse’s first one-of-a-kind vehicle for a client, the 2018 Lamborghini SC18 Alston (which was itself based on the Aventador SVJ). 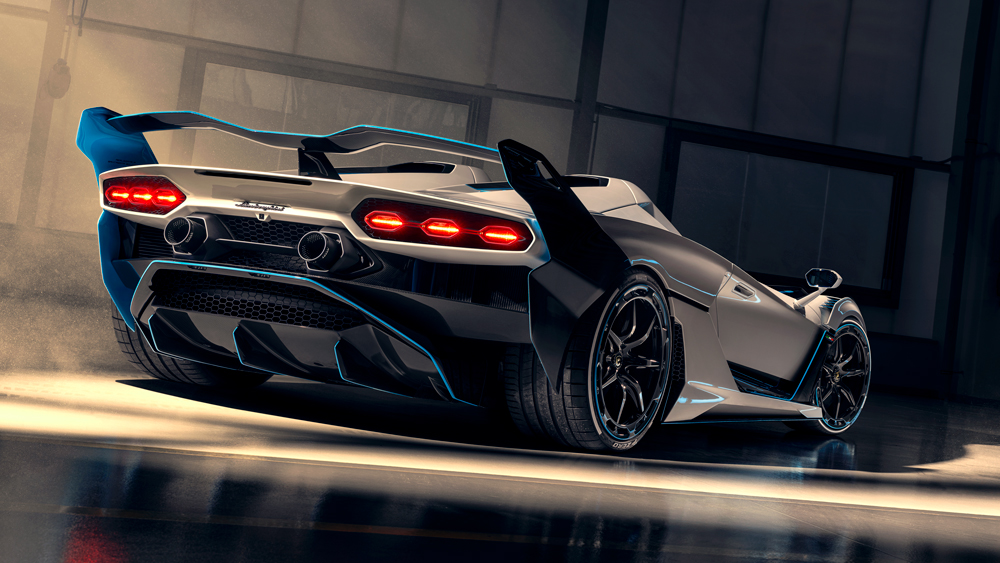 The street-legal SC20 is powered by a naturally aspirated 6.5-liter V-12. Photo by Philipp Rupprecht, courtesy of Automobili Lamborghini S.p.A.

Styled by Mitja Borkert and his colleagues at Lamborghini’s Centro Stile design department, the car uses carbon fibre for the monocoque chassis and bodywork and features a distinctive front splitter plus elongated, nostril-like air intakes on the hood—similar to those on the Huracán GT3 Evo—and a carbon-fibre rear wing that offers three configurations for varying levels of downforce. 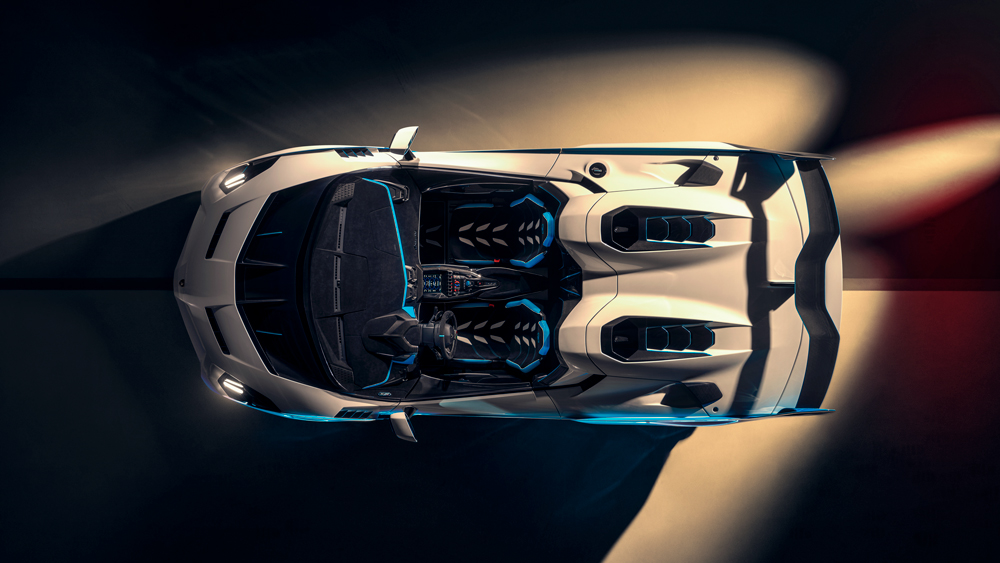 The SC20 is a roofless study in aerodynamics. Photo by Philipp Rupprecht, courtesy of Automobili Lamborghini S.p.A.

The car’s creased and angular aesthetic, almost origami in nature, is further punctuated by the brand’s Bianco Fu shade of white with Blu Cepheus accents for the exterior. The interior wears the same blue trim set against a selection of black known as Nero Cosmos. 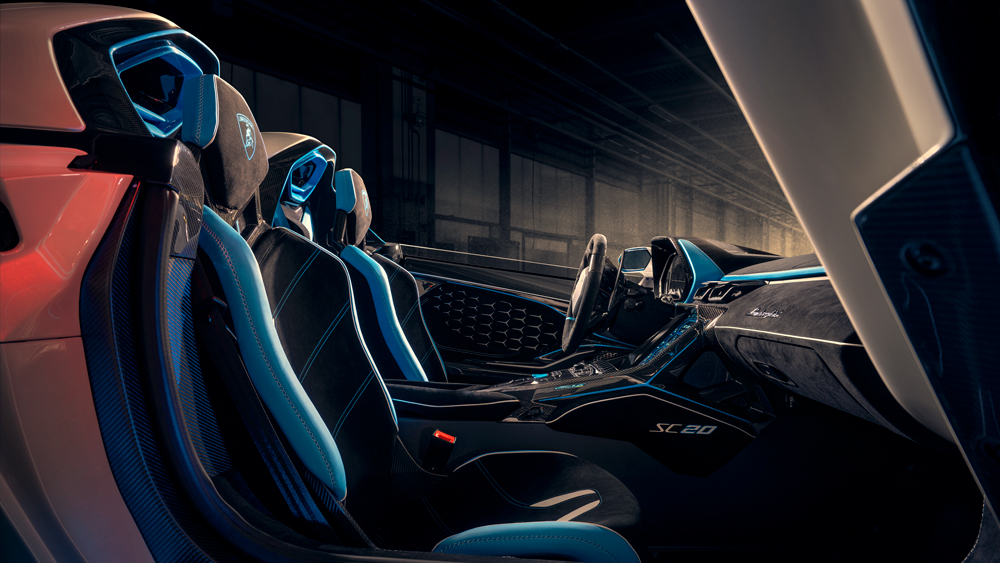 But one of the SC20’s most striking elements, both visually and from an engineering standpoint, is what appears to be the lack of a windscreen—a testament to the airflow management incorporated within the cockpit design—which recalls the McLaren Elva, the Ferrari Monza SP1 and SP2, and the Aston Martin V12 Speedster. We may be in the dark days of winter, but the SC20 is the latest reminder that the sun will shine again.