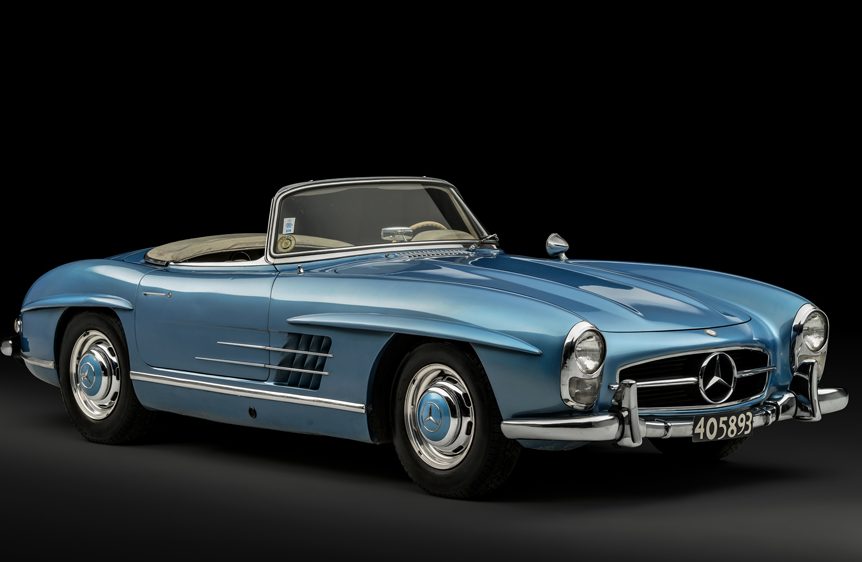 Available privately through RM Sotheby’s, the car was driven for decades by the great racer.

“Once-in-a-lifetime opportunity” is an overwrought phrase that, in this rare instance, is no exaggeration. From February 28 to March 4, RM Sotheby’s will offer the 1958 Mercedes-Benz 300 SL Roadster owned by racing icon Juan Manuel Fangio, and do so through private sale in a sealed-bid auction.

Considered by many to be the greatest race car driver of all time, Fangio was born in Balcarce, Argentina on June 24, 1911. His racing career started late, with his most famous years spanning the period from 1950 through 1958. During that time, he piloted Alfa Romeo, Ferrari, Maserati and Mercedes-Benz race cars to victory, taking five World Drivers’ Championship titles—two in the Mercedes-Benz W196 with successive wins in 1954 and 1955. It took 46 years until Michael Schumacher beat his record. Fangio was not only the most revered race car driver of the era, he was as charismatic as he was technically accomplished. And he was wildly popular. 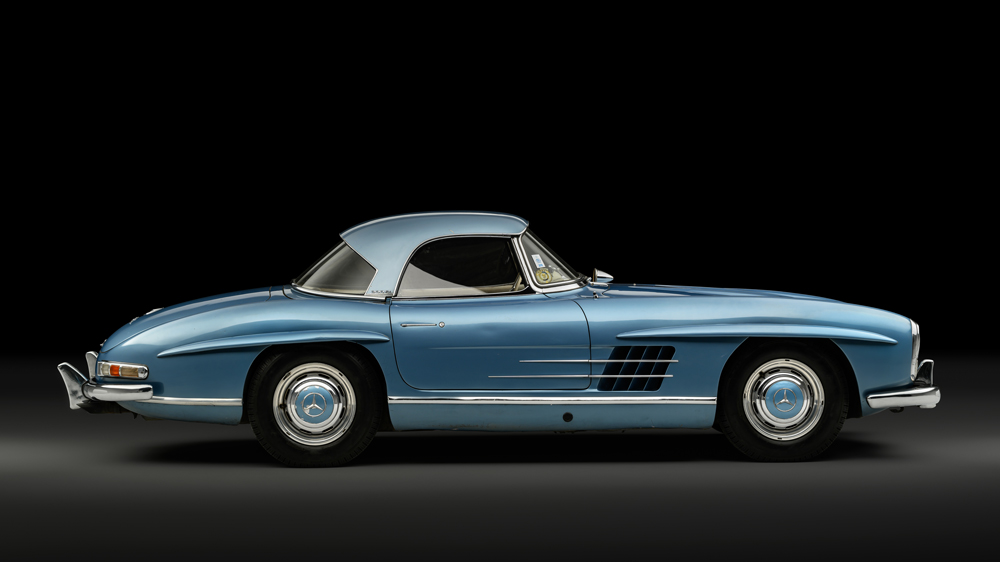 This Mercedes-Benz 300 SL Roadster was owned for decades by Juan Manuel Fangio. Photo by Tim Scott, courtesy of RM Sotheby’s.

This particular Mercedes-Benz 300 SL was presented by the German marque as a retirement gift to its most illustrious driver. Delivered to the Dorchester Hotel in London, the 300 SL arrived in time for Fangio’s 47th birthday. Immediately, he began a continental driving tour with his girlfriend Andrea Berruet, while assuming his new post-retirement role as “ambassador” for Mercedes-Benz in Europe, a position he held until 1960. Afterward, Fangio assumed the same responsibility in Argentina, with the 300 SL sent there and declared as a “trophy” in order to circumvent taxes levied on imported automobiles. The car was first registered in Argentina in March 1960.

Fangio used his 300 SL for two decades in his ambassadorial assignment, appearing at Mercedes-Benz showroom openings throughout South America, as the carmaker made inroads into the continent’s affluent society. According to Fangio’s nephew, Juan Manuel Fangio II, “That car marked my childhood [and] identified my uncle after his retirement.” 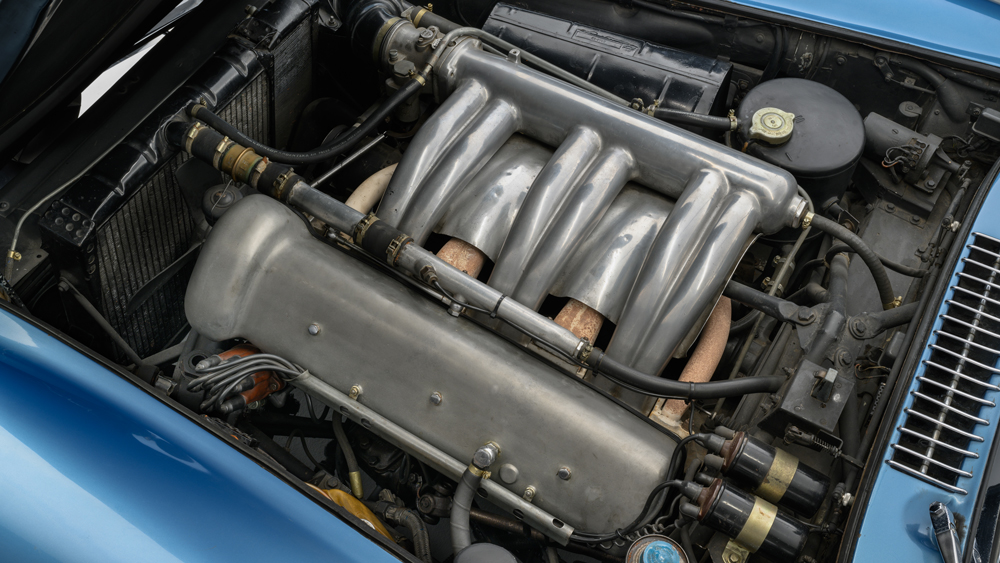 Providing the car’s muscle is a Mercedes-Benz 3.0-litre, straight-six engine that makes about 160kW. Photo by Tim Scott, courtesy of RM Sotheby’s.

That the 300 SL was one of Fangio’s favourite cars is evident from the 72,951 kilometres spooled up on the odometer by the champion himself, and it was perhaps the car in which he travelled a greater distance than any other. His Mercedes-Benz was certainly a “keeper,” as later in his life, it was displayed in the Juan Manuel Fangio Museum in the driver’s hometown of Balcarce. Fangio presided as the honorary president of Mercedes-Benz Argentina from 1987 until his death in Buenos Aires, at age 84, on July 17, 1995. The car then passed to his heirs, making the winning bidder only the second registered owner of this vehicle after the family. 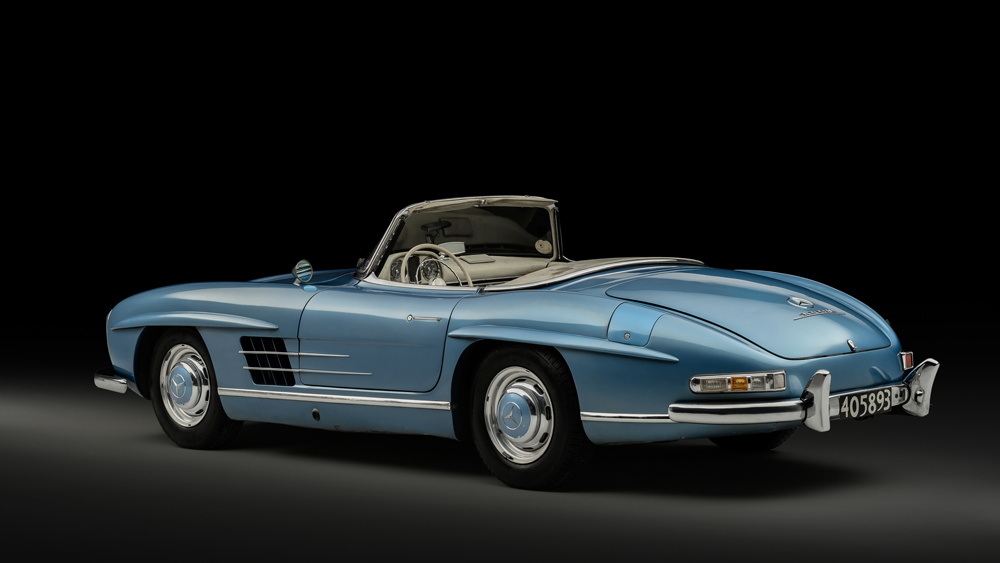 The Mercedes-Benz 300 SL model line, comprising both the “Gullwing” Coupe and Roadster, has demonstrated remarkable performance as a collectible over the past year, with sales regularly smashing previous records. Both model variants have always represented the bluest-of-blue-chip collector-car acquisitions, not just because the numbers produced hit the sweet spot (1,400 and 1,858, respectively), but because they are rugged, beautiful and rewarding to drive. Mercedes-Benz’s 3.0-litre, straight-six engine features Bosch mechanical fuel injection and produces about 160kW in street form, sufficient output to make it useable today. And “tank-like” build quality is an understatement. 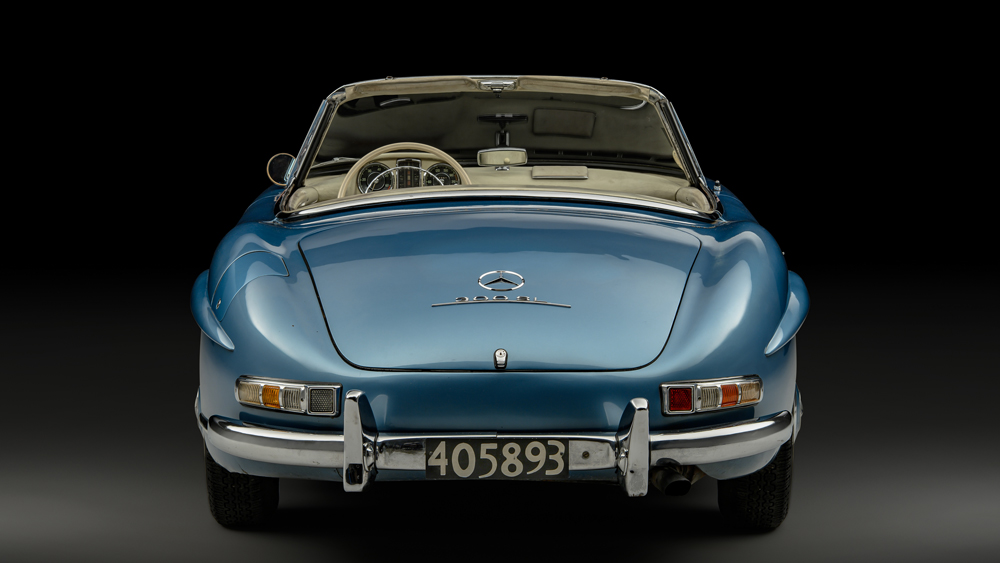 The winning bidder will be only the second registered owner of this vehicle after the Fangio family. Photo by Tim Scott, courtesy of RM Sotheby’s.

Even without such rarified and unrepeatable provenance, this 300 SL would be a highly desirable car. Importantly and essentially, the vehicle retains its original matching-numbers chassis, engine, body, gearbox differential, hood frame and hardtop, requisite characteristics for the best examples. The colourways are classic: light metallic blue with a cream leather interior, matching-colour hardtop and even the original cream-coloured suitcase that carried Fangio’s personal effects. Original only once, as they say, the interior shows every wear mark put on it by Fangio himself. It also features the unique gear knob fitted by its owner. 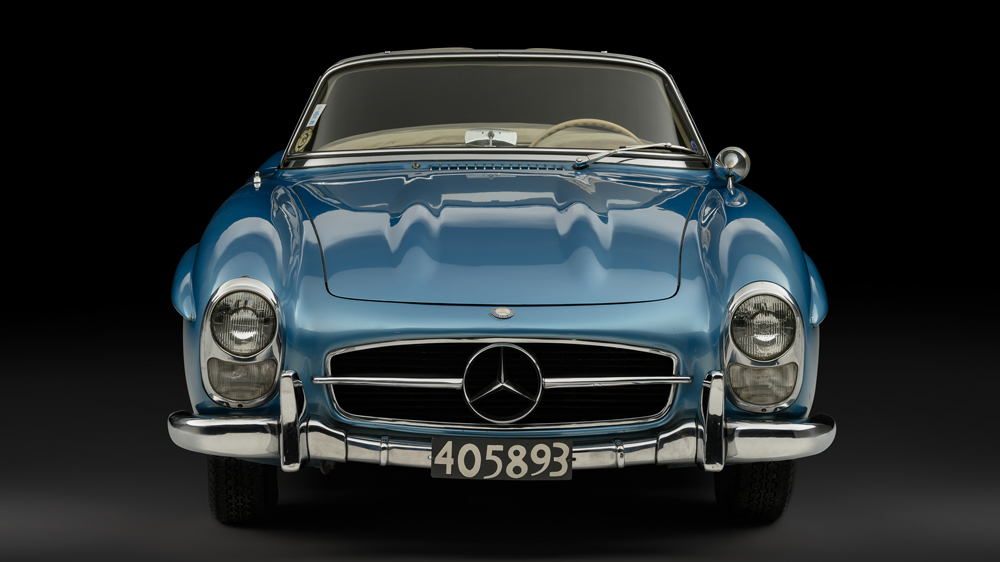 The cache of celebrity ownership is an ephemeral thing, and depending on the person and their automobile, any added material value is likely to diminish over time. Sooner or later, names like Tom Mix, Clark Gable, Elvis Presley and the Beatles fade in the minds of successive generations of collectors. But this car and its owner were inextricably entwined in a relationship that spanned decades. Both man and machine achieved greatness: one of the most celebrated race car driver in history, and one of the most celebrated cars. 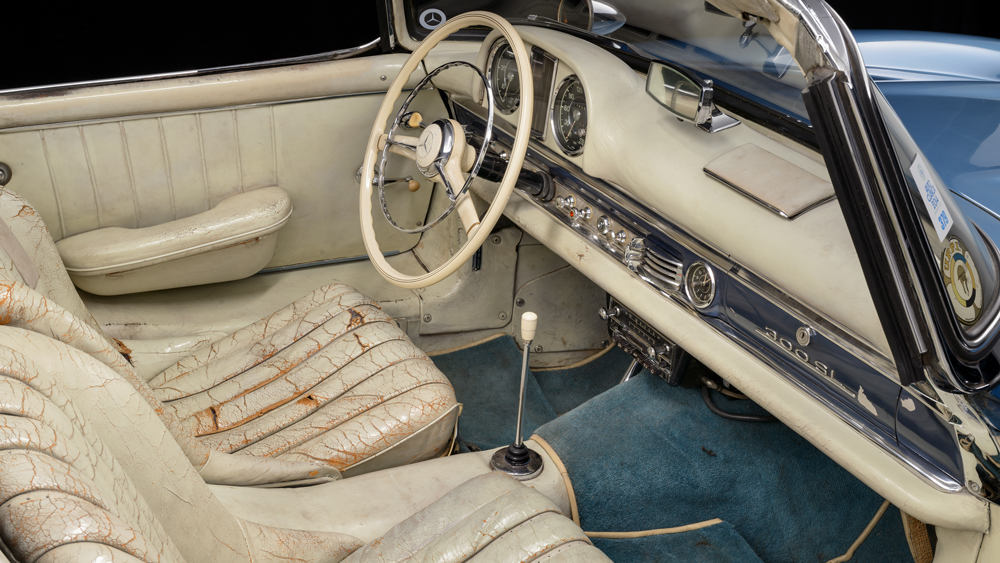 The unrestored interior displays every wear mark put on by Fangio himself. Photo by Tim Scott, courtesy of RM Sotheby’s.

The world record thus far for a 300 SL at auction was set in 2018 at Artcurial in Paris, where a 1963 model sold for the equivalent of more than $5.13 million. And while RM Sotheby’s remains tight-lipped with an estimate for Fangio’s roadster, the experts at Hagerty have predicted a result as high as $5.5 million. As always, however, the market will speak.