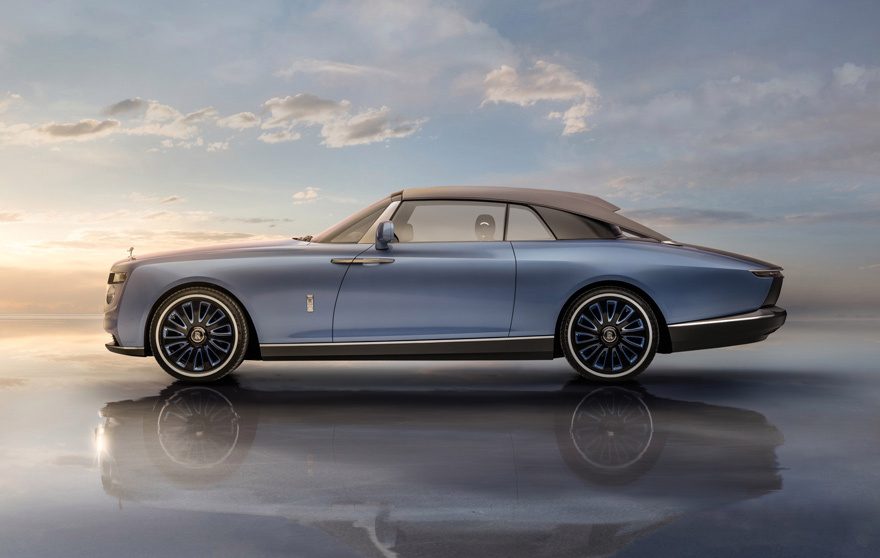 The convertible could be the most expensive new car ever.

Rolls-Royce is notoriously coy about the price of its truly bespoke limousines, yet since this new, outrageously decadent Boat Tail was inspired by the $17 million Rolls-Royce Sweptail from 2017, but with increased complexity, it may easily be the most expensive new car to date. (That title currently resides with Bugatti’s La Voiture Noire, which sold for a reported $23.2 million after taxes.) The stunning cabriolet is named after the tapered rear end—a style that dates back to the 1920s, when cars like the Auburn 851 Speedster and Bentley Speed Six Boat-Tail were the talk of the town.

In the very early days of boat tail design, engineers would simply fix the hull of a boat onto the rolling chassis of a car, creating a streamlined automobile with a nautical theme. It’s a design that disappeared gracefully into the history books, until now. 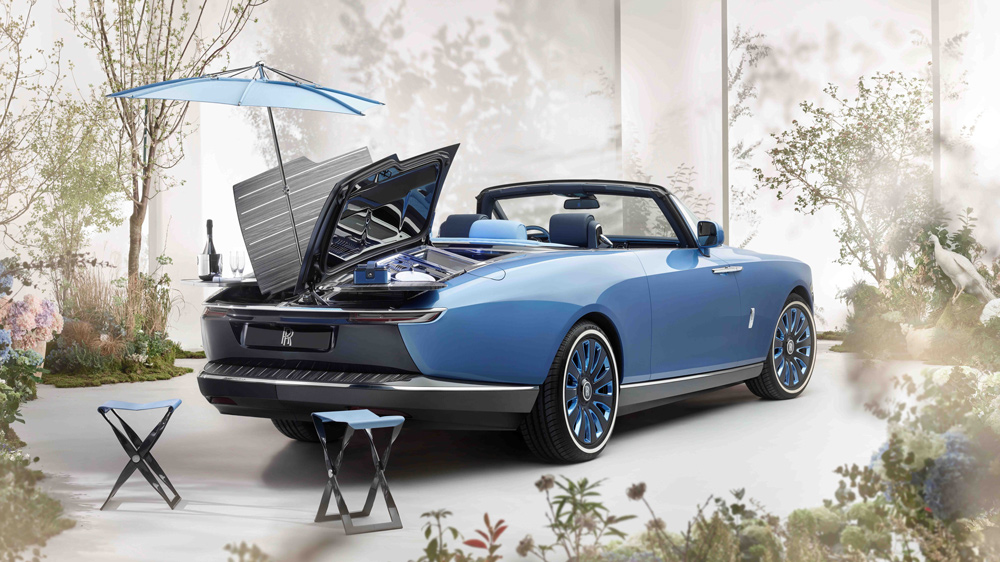 At the rear, twin side-opening compartments are hinged in the middle and open like butterfly wings. Photo: Courtesy of Rolls-Royce Motor Cars Limited.

The new Rolls-Royce Boat Tail measures an ocean-going 5.8-metres in length and is based on the aluminium spaceframe platform shared by the Phantom, Cullinan and new Ghost models, and it shares the same 6.75-litre V12 engine. Otherwise, this remarkable car is decked out like no other Rolls-Royce on the planet.

The example showcased is one of three different Boat Tail versions that have been recently hand-built as customer commissions, this one for a mystery man and his wife living Stateside—both believed to be in the music industry. And I was recently granted a sneak preview before the car is ceremoniously handed over.

The most eye-catching feature of this vehicle is the enormous, hand-painted Azur blue bonnet, graduating down to a lighter shade. Up front, a painted Rolls-Royce pantheon grille replaces the traditional stainless-steel finish for the first time in the modern era. 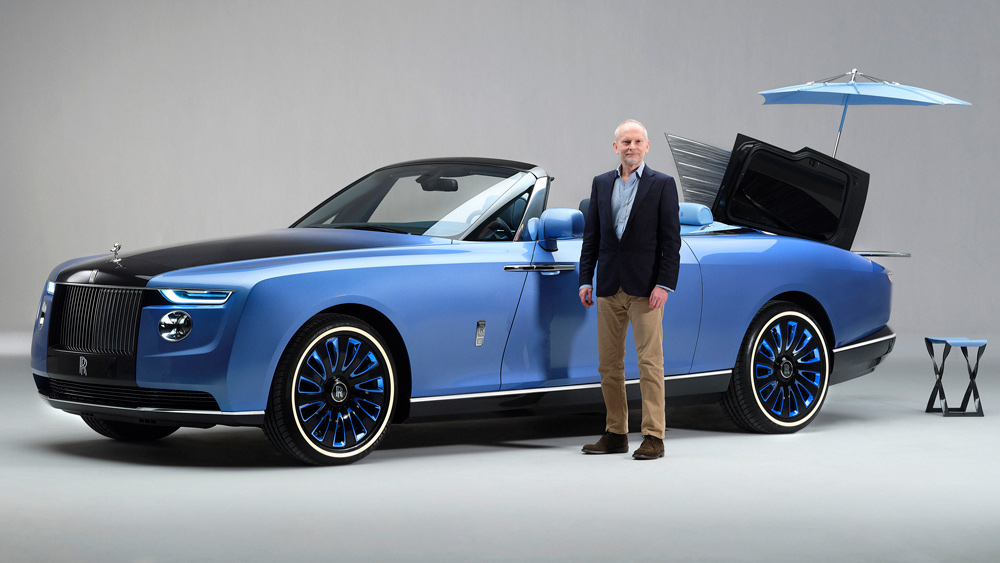 Writer Jeremy Taylor offers a sense of perspective while standing next to the 5.8-metre convertible. Photo: Courtesy of Rolls-Royce Motor Cars Limited.

At the rear, twin side-opening compartments are hinged in the middle and open like butterfly wings to reveal an Aladdin’s cave of goodies. On the nearside, a dual champagne cooler was specifically designed to fit bottles of the owner’s favourite Armand de Brignac vintage. On the other side is a set of crockery by Christofle of Paris matched to salt and pepper grinders, all engraved with the car’s name. Caviar is kept cool in a proper onboard fridge—with various other food compartments—rather than a chiller. 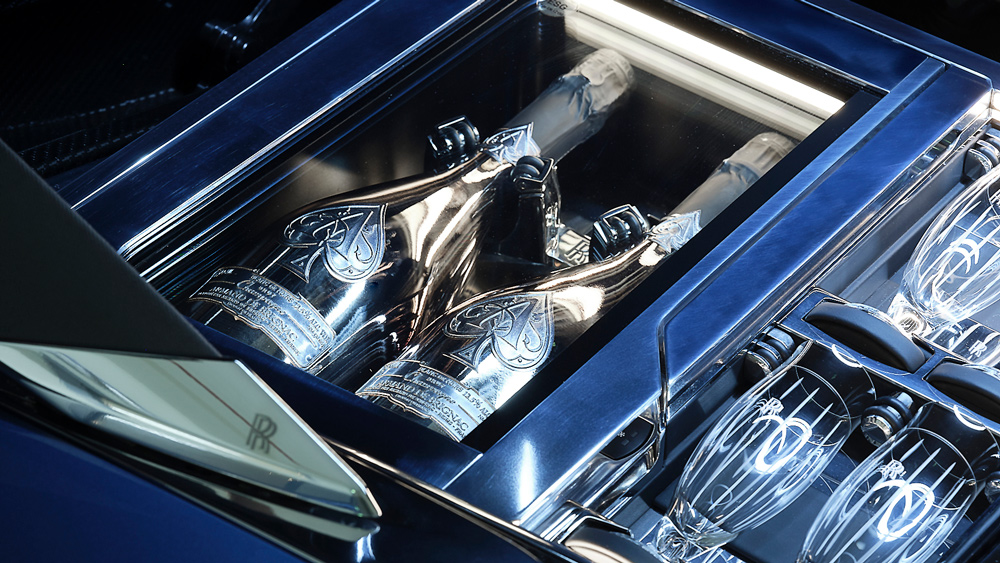 The crowning glory, however, is a parasol that slots into the rear of the Boat Tail to provide extra shade. With a stainless-steel shaft and aluminium coupling, the high tensile fabric is stretched over carbon fibre stays. And just to be sure, it was tested in a wind tunnel.

Rolls worked with Swiss-based House of Bovet to create reversible “his and hers” watches for the couple who own the car. The centrepiece of the minimalist dashboard is a slot to insert one of the timepieces, serving double duty as the Boat Tail clock. 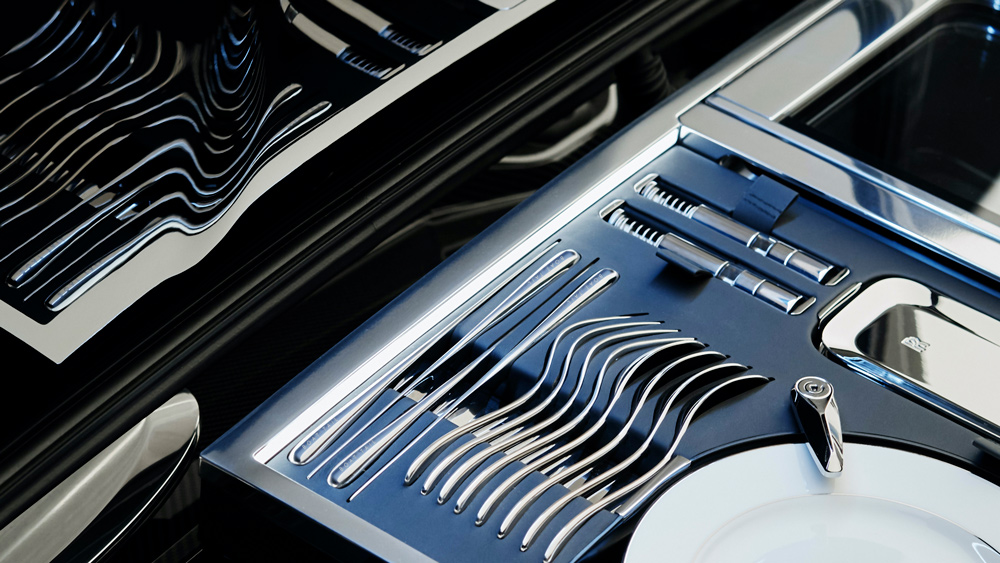 The onboard crockery by Christofle of Paris sits neatly tucked away. Photo: Courtesy of Rolls-Royce Motor Cars Limited.

One side of the man’s watch is said to show the celestial pattern above his birthplace. A titanium drawer beneath the “clock” slot is designed to carry another wrist watch, particularly important in this Rolls, as Alex Innes, the head of the marque’s Coachbuild Design department, explained.

“One of the great characteristics of piloting a Rolls-Royce is the light steering and thin steering wheel,” notes Innes. “This particular client likes to remove his wristwatch when driving and hated the idea that it would be stowed of sight.” 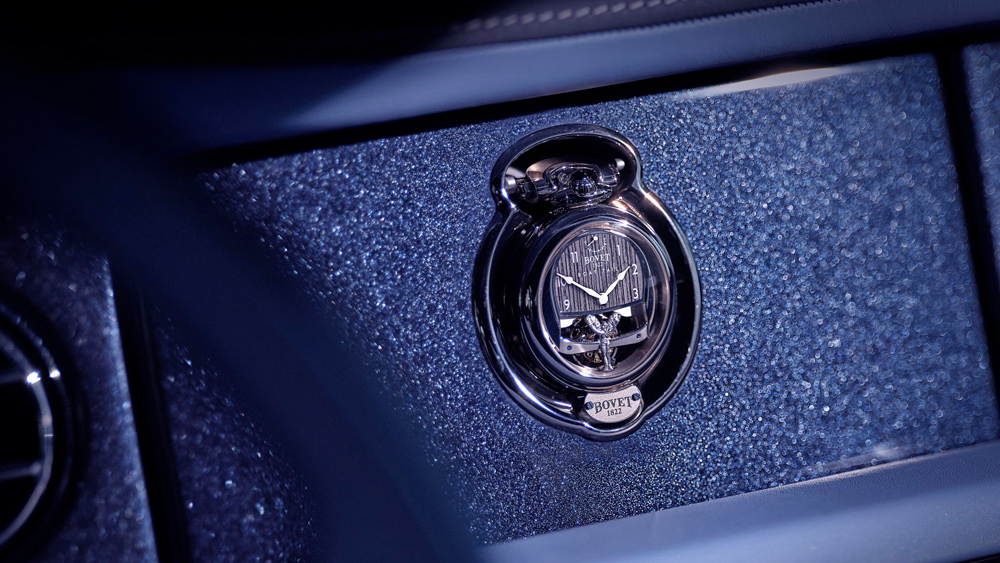 The centrepiece of the dashboard is a slot to insert one of the two custom Bovet watches made for the owners. Photo: Courtesy of Rolls-Royce Motor Cars Limited.

The Boat Tail is a four-seat convertible with an emergency tonneau, just in case the heavens open. The car is also provided with a detachable carbon fibre roof that turns the Rolls into a breathtaking coupe. A lightweight aluminium hoist for the latter is, naturally, included in the package.