The latest rarity in the Italian marque’s ‘Icona’ series.

The Prancing Horse unveiled the latest addition to its line of ultra-limited-edition supercars, the Daytona SP3, at a special event at the Mugello racetrack in Italy over the weekend. The vehicle’s design is inspired by some of the marque’s legendary 1960s racers and is powered by a naturally aspirated V-12 that pumps out well over 600kW.

Few names will get closed-wheel racing fans’ hearts beating faster than that of the Ferrari Daytona. That was the the unofficial moniker of the marque’s sport prototype race cars in the 1960s. Why? Because some of their greatest exploits came at the 24 Hours of Daytona, including a 1-2-3 finish by the 330 P3/4, 330 P4 and 412 P at the 1967 running of the famed endurance race. It’s that trio of racers, the brand said in a press release, that is the inspiration for the brand’s latest Icona model. 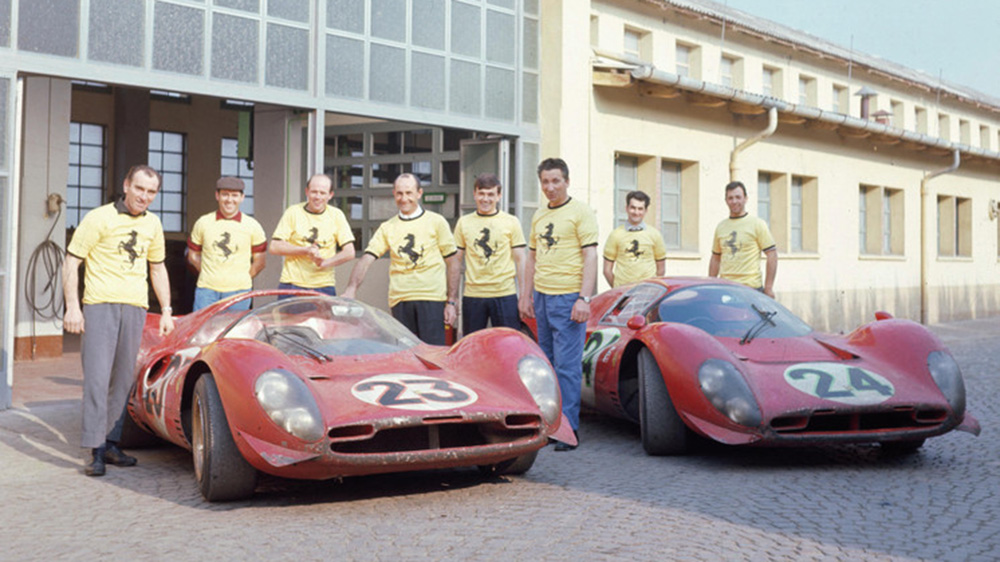 This inspiration can be clearly seen in the carbon-fibre body of the mid-engine Daytona SP3. Its aerodynamic design is one of flamboyant contours, with a wraparound windscreen, large fenders housing both sets of wheels and a flared spoiler in the back. Despite these very clear call backs to Ferrari’s racing glory days, the car still looks fresh and brand new. This is thanks in no small part to its very 2021 lighting package, which includes razor-thin headlamps up front and a horizontal luminous bar in the rear, just beneath the spoiler and its dihedral doors. The car also features a semi-convertible targa design, but there is a clip-in roof panel when you need some coverage.

This mixture of the old and new continues inside the car. Behind the steering wheel, you’ll find the same digital dashboard and Human-Machine Interface technology suite that are available on the SF90 Stradale, Roma, and 296 GTB. There’s no massive infotainment screen above the centre console, as is increasingly common on luxury vehicles, but that’s because Ferrari wants to continue to make sure its drivers keep their hands on the wheel and eyes on the road. Meanwhile, the adjustable seats are integrated into the body of the car, and are covered by fabric that connects over the centre tunnel, as was common on vehicles built during the Swinging Sixties. 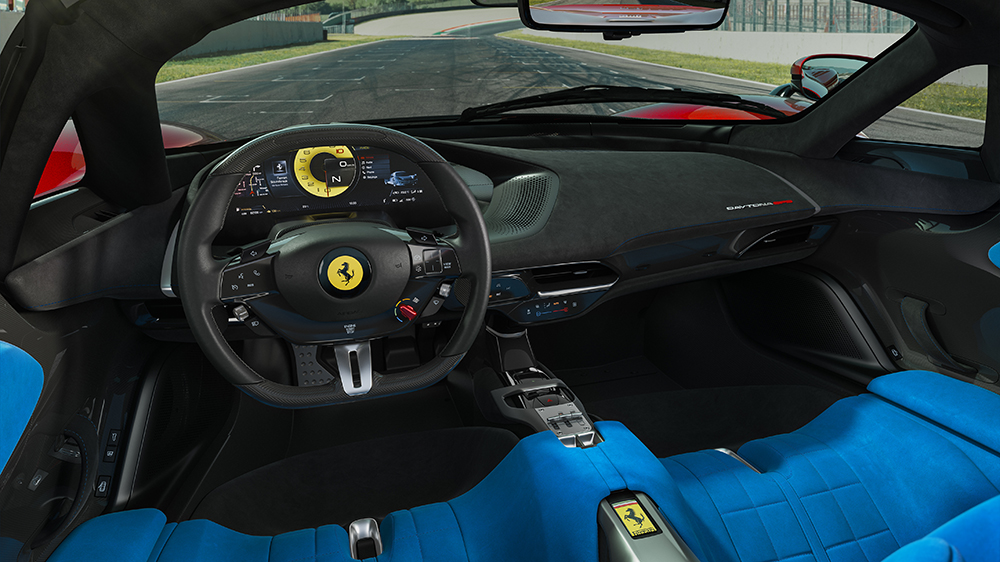 Inside the Daytona SP3 Ferrari

The Daytona SP3’s engine is situated behind the vehicle’s two-person cabin and what an engine it is. Ferrari has equipped the limited-run super car with the same 6.5-litre naturally aspirated V-12 that can be found in the 812 Competizione. Some key changes have been made to it, though. It now features titanium connecting rods and its piston pins, sliding finger followers and camshaft have all been given a Diamond Like Carbon treatment to reduce friction, according to a press release. Mated to a seven-speed, double-clutch gearbox that sends power to the rear axle, the engine generates 618kW, 697Nm of torque and has a redline of 9,500 rpm. In terms of horsepower, it has 10 more horses than the 812 Competizione, making it Ferrari’s most powerful combustion-powered road car. That seems appropriate for a car that pays tribute to the brand’s legendary racing legacy. 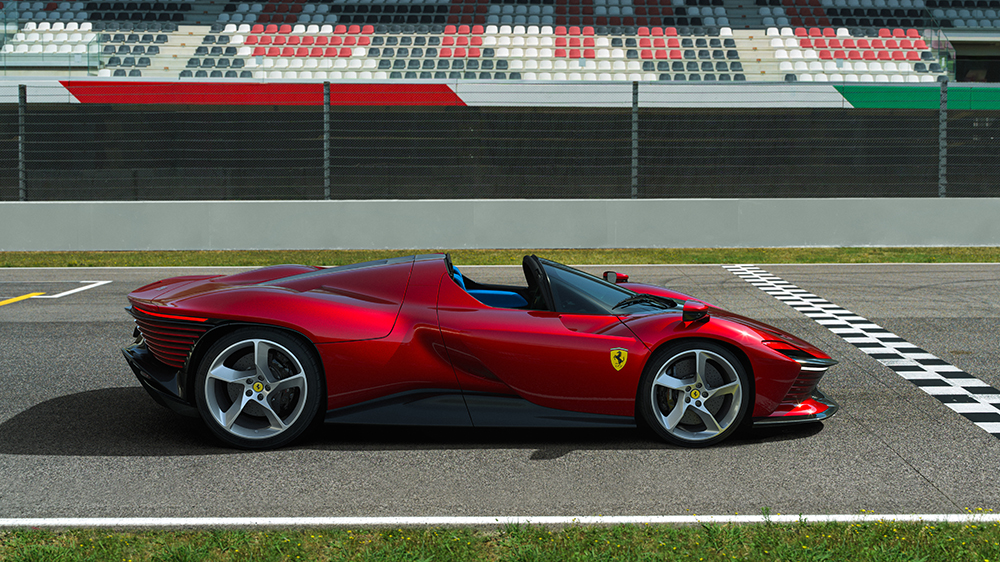 Although we know what to expect from the Daytona SP3, there are still two open questions. The first is how many examples will be built. The automaker said the car will only be made available to a limited number of VIP clients and collectors but didn’t announce an exact figure. Past Icona models, like the Monza SP1 and SP2, have been limited to 500 examples. The second is how much it will cost. No figure was quoted, but considering the series it belongs to, the race cars it honours and its V-12 powerhouse, we wouldn’t be surprised if its runs seven figures. That’s only to be expected of the best Ferrari has to offer.

Check out more photos of the Daytona SP3 below: 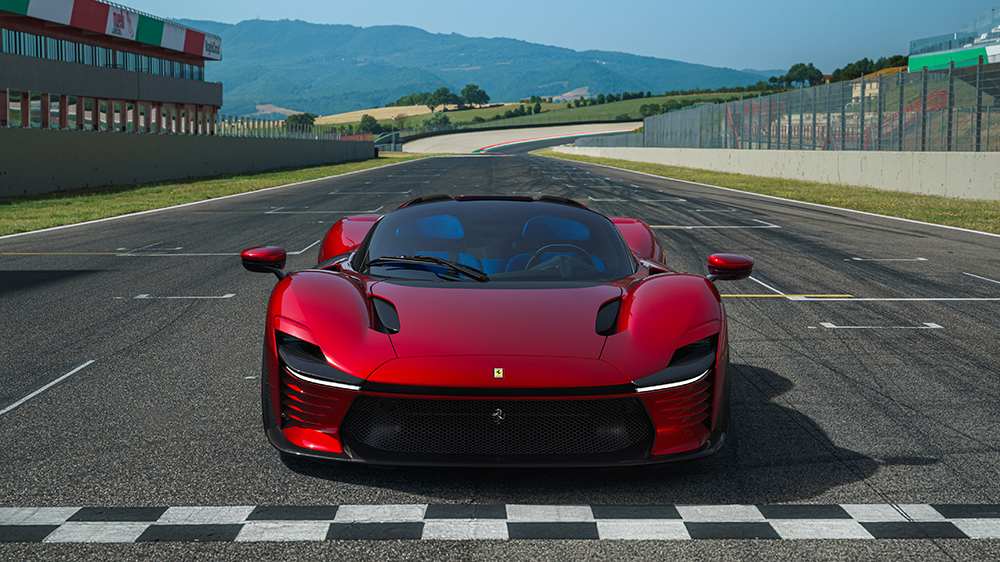 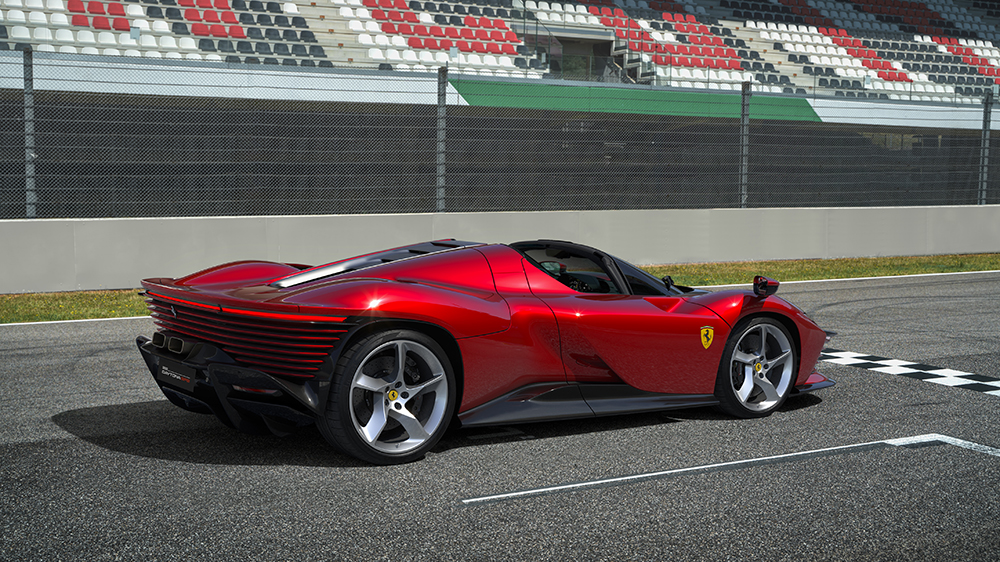