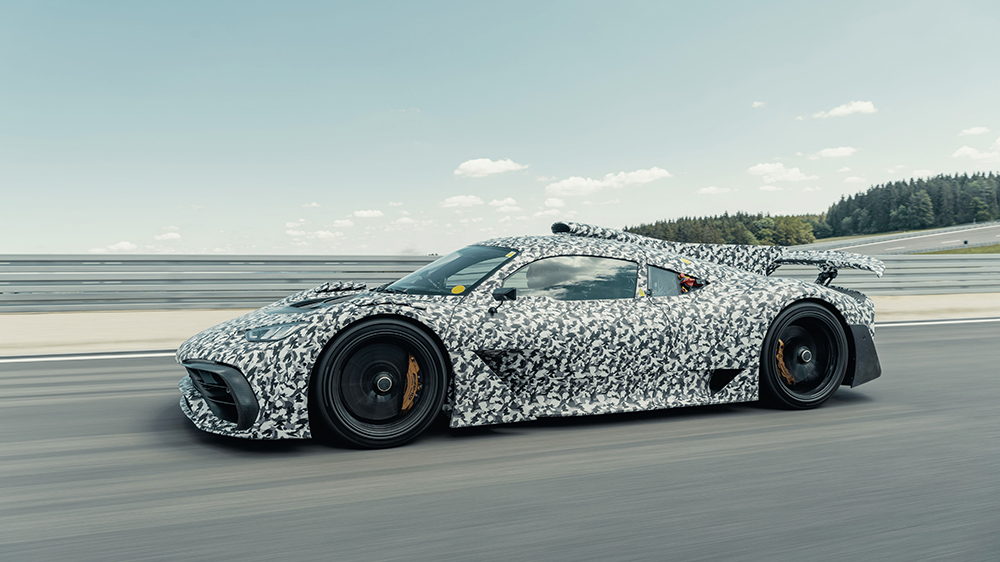 Listen To Mercedes-AMG’s Upcoming ‘Project One’

The hybrid powertrain can produce more than 745kW.

Does an engine designed for a Formula 1 racer have any business in a road car? That was the question on Mercedes-AMG’s mind when it announced the One hypercar three years ago, and based on a new video it looks like the automaker has figured out how to make it work.

Earlier in the week, Mercedes’ performance division uploaded footage showing the high-performance speedster undergoing testing at the automaker’s proving grounds in Immendingen, Germany. While the car is covered in camouflage, obscuring its final design, you do get to see it in motion and, most importantly, hear its powerful engine roar.

In the minute-long video, you can see the driver and engineer giving the car a serious run around the test track. Thanks to some active aerodynamic elements, the car is shown tearing around the curving track with ease. Even more noticeable, though, is the roar emitted from curvaceous hypercar as it makes its way through the gears while zipping through the course.

It should come as no surprise that the One is as loud as it is. As mentioned earlier, the car is powered by a Formula 1-sourced 1.6-litre turbocharged V6 hybrid powertrain capable of outputting more than 1000 horses, according to the automaker. Although it was never meant to be used in a road car, engineers at AMG have modified the engine so that it complies with modern emission standards. And while we’ve yet to see what kind of performance numbers it will put up, the sneak peek offered by the video is certainly intriguing.

While Mercedes-AMG wasn’t ready to reveal a timeline for the car, it did reveal that its “comprehensively electrified and highly complex hybrid” has been finalised. Up next, more testing, this time at the infamously difficult Nürburgring.

Via Robb Report US.
ADVERTISE WITH US