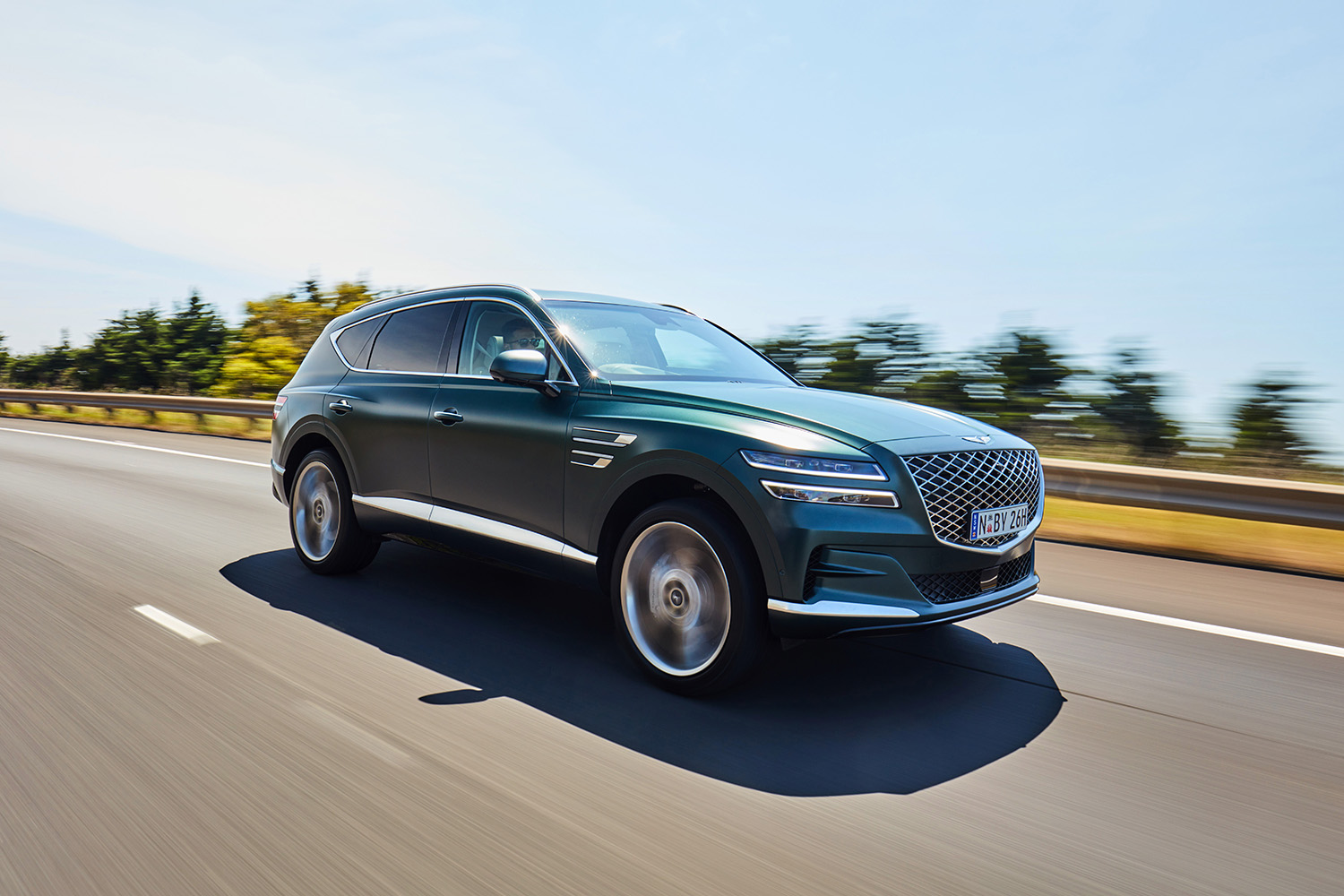 We took the ‘accessible’ GV80 SUV for a spin — to see if we can overcome our badge snobbery.

The Genesis GV80 isn’t one of the ‘big three’ Germans. But should that mean we immediately overlook this market newcomer — a dressed up Hyundai and SUV being loudly billed as luxury.

The first flagship SUV from Genesis is, of course, akin to Rocky v Drago — every bit the underdog. Notably, it’s sense of fight and what it brings to the ring does shift the perspectives surrounding so-called ‘accessible’ luxury.

What’s delivered here is a stylish and adept vehicle — one more than capable of making you look twice and, perhaps, think twice before signing the dotted line on another European.

Yes, this thing looks very much like a Bentley Bentayga – which really shouldn’t come as a surprise given Hyundai’s global design chief, Luc Donckerwolke and Genesis design chief, Sangyup Lee, both left the British marque to join the Korean juggernaut.

The GV80 is a big (at 4.9m long and 1.9m wide) and handsome SUV – fitted with an aggressive exterior that nods to the upper end of the SUV market. The ‘G-Matrix’ grille takes centre stage while quad headlights further bolster a point of brutish difference. The rear also flexes its muscles and boasts a quad-light system, though the spaced Genesis lettering is overplayed.

Shortly after being thrown the keys a roadworker gave a notable thumbs up – an immediate nod to the obvious presence this thing has on the road. On winding down the window, he commented about its appeal, especially compared to the German SUV sat in front.

Four configurations are offered – starting with the 2.5LT which features a 2.5 litre 4-cylinder turbo petrol with 224kW and 422Nm available in rear-wheel drive and AWD, followed by the 3.0L diesel AWD which is a 3.0 litre straight six, turbo diesel engine with 204kW and 588Nm.

As for what we were strapped into – well, that’s the one driving those aforementioned questions here, the flagship 3.5T AWD in a glossy Cardiff Green.

As is somewhat discernible, it features a 3.5-litre turbo powerplant producing 279kW and 530Nm. They’re decent enough figures that provide plenty of flight underfoot, however, you may want to stick to ‘Sport’ to ensure you feel the best the SUV has to offer, with ‘Comfort’ proving just a little too lazy.

Sure, the GV80 doesn’t necessarily compete in the power department with likes of BMW, Audi and Mercedes and what is a heady slate of modern super-SUV’s. But not everyone wants to go fast in a big car. For some, it’s the notion of being cocooned in much and safe comfort, with a stacked set of features.It’s here the Genesis excels, with a base list further elevated by a tidily parcelled $10,000 luxury pack. Unlike marques where each add-on and optional extra creates a domino effect that sees final totals arrive like an unsighted uppercut, Genesis’ all-inclusive luxury pack approach means a Nappa leather appointed interior, quilted seat patterns, suede headlining and pillars, greater noise control, heated and ventilated 2nd-row seats, three-zone privacy glass, smart parking assist and remote smart parking assist, ergo motion massage function and more.

It’s a considerable list that adds to the already well-appointed and voluminous standard interior – boasting 2152 litres or 2144 litre of cargo capacity in the 5- and 7-seater respectively. Inside, one can expect luxurious touches such as open-pore real wood trim, leather-appointed interior, dashboard and door to select a few highlights.

Also standard is a 12-inch head-up display, 14.5 HD touch screen display – which is intuitive and feature heavy without overcrowding the front dash space – wireless mobile phone charging and Apple Carplay. A 21-speaker 1050W Lexicon by HARMAN audio system delivered as standard will also ensure the rest of the luxury SUV market is listening. 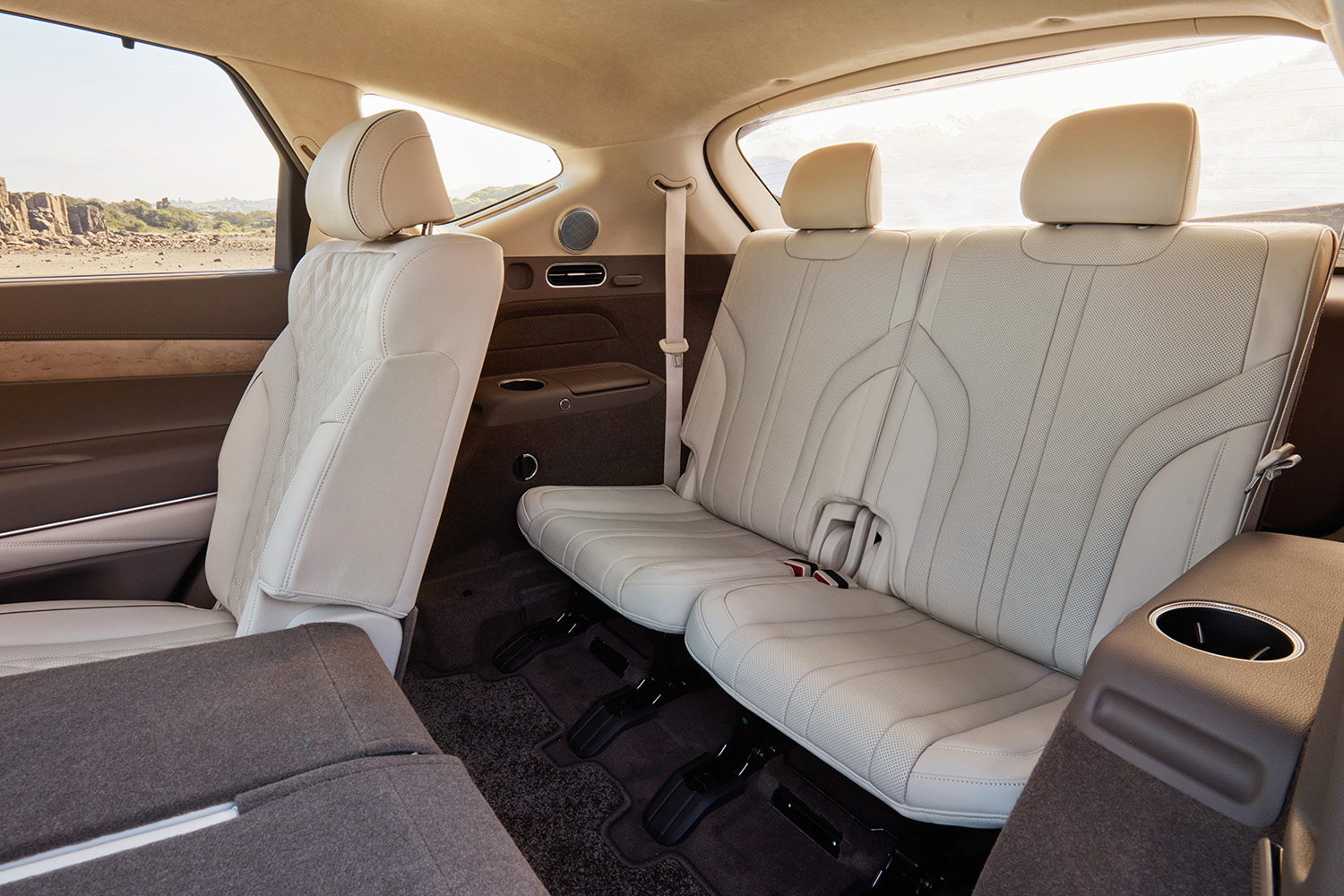 In terms of another valid extra – a collection of matte colours ($2000) further the GV80’s external confidence and allure and are available in Melbourne Grey, Brunswick Green and Matterhorn White.

Beyond the car itself, Genesis is further pushing its cut through via a five-year/unlimited-kilometre warranty and five-year/50,000km (whichever comes first) complimentary scheduled servicing. Owners will also have access to the Genesis Concierge Service and Courtesy Vehicle Service – the former meaning pick-up and delivery within a 70km distance to a Genesis garage when due for service – as well as FOC access to a five-year 24/7 roadside assistance program.

The Genesis GV80 makes plenty of sense. It’s a logical choice for those that do certain calculations when it comes to automotive purchases. It also ticks a lot of boxes – certainly more than we were expecting – and holds a level of sophistication and style we also weren’t prepared for.

Can we move beyond our badge snobbery here? No, not yet.

Will this impressive contender take a few rounds off the big Germans in this market? We’re happy to wager that it will.