From Bugatti To The Beach

It’s a tale of entwinement between one of the world’s best-known and most revered auto designers and an unassuming British photographer and occasional writer.

Frenchman Etienne Salomé really needs no introduction. An artist, he’s renowned for his time spent as a Bugatti design executive and the man responsible for La Voiture Noire—a one-off that has not only seen many grown men openly shudder with excitement but which sold in 2019 for approx. $25.3 million.

Del Gregory, meanwhile, is said Brit who in 2020 decided to launch the digital automotive magazine B500. It proved his personal entree to Salomé—a bond formed and was immediately framed by a passion for design, cars, life. It led to late-night discussions that often began with the sentence, “what if we … ” and which in turn became progressive explorations regarding the creation of one-off art pieces or a steering wheel, perhaps, three of them.

Salomé and Gregory eventually decided on a whole car—because why not? Finding a shared attraction to Land Rover Defenders, they approached acclaimed UK custom shop Arkonik about a possible build and are now busily preparing to unveil (hence no photos as yet) their unique beach cruiser to the world.

We caught up with the pair prior to release—to listen, really, to two men invested in a rare and focused project that will have some scratching their heads and most rightly cheering them on. 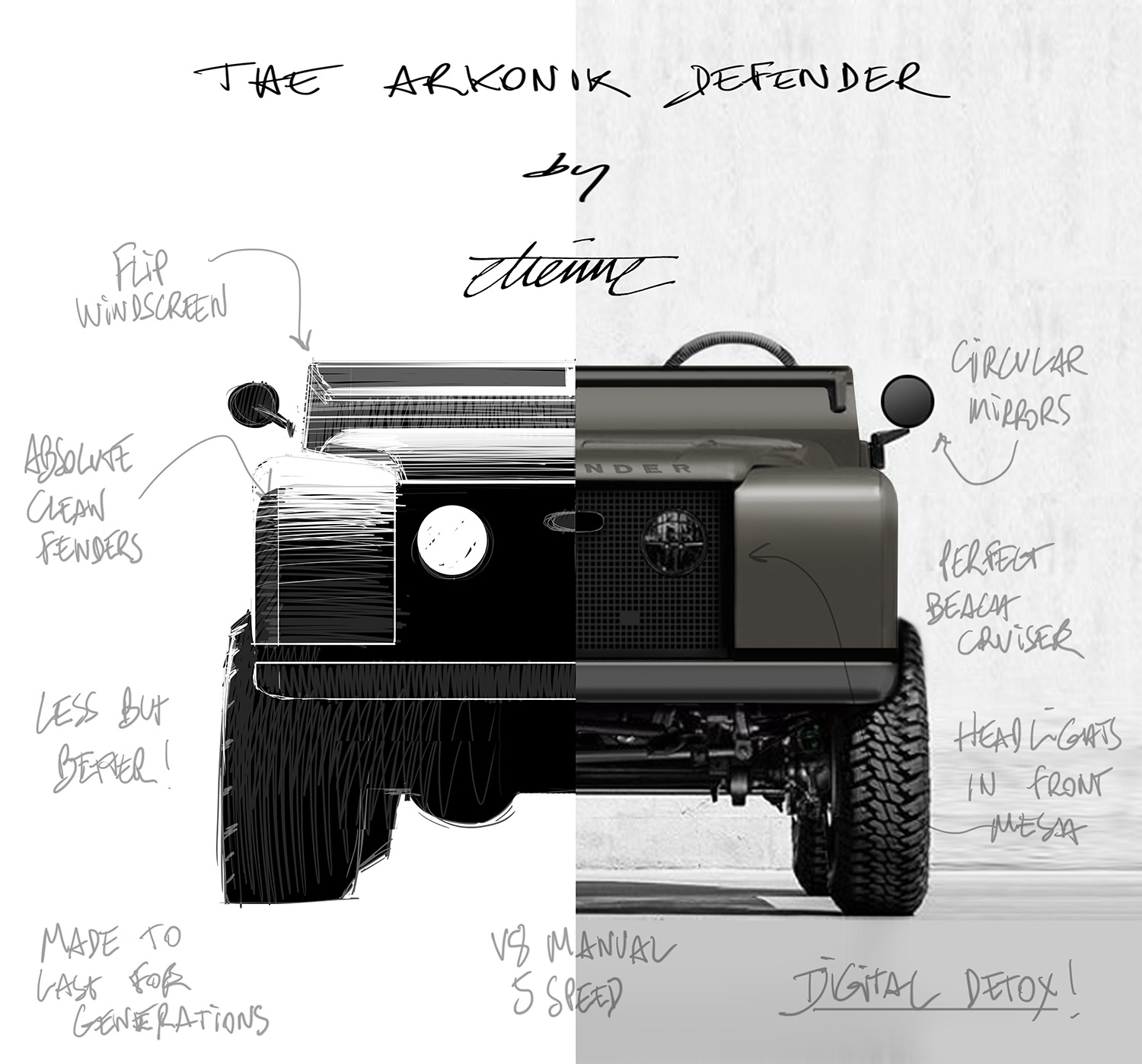 Robb Report: Etienne, talk us through your gravitation towards the Defender, there’s obviously some history here?

Etienne Salomé: I actually own a 110 and I always enjoy it — the beauty of the Defender is you don’t know when you will arrive but you know you will get there [laughs] … This is actually the big difference to any other A-to-B car, it’s that you enjoy the ride instead of just getting there, you know? And so the more Del and I discussed it, the more it evolved and the more we wanted this to be different to all the others—there are now so many out there taking the vintage, classic Defender [and modernising them] …

RR: The philosophy here is very different to that, isn’t it?

ES: Yes. We scratched our heads about what we could do to the Defender that is not off the shelf—the idea to look back to look forward and what is the essence of it and why was it built … And back then there were no designers—they were called differently—and it was then about making a machine as simple as you could, not from a design or styling statement but as a simple [way] to service and manufacture and adjust and make different platforms and then this became what we know today as the Defender … And there is a beauty in this—the idea of less but better, and so we started and said what can we take out? I am personally always of the idea that a product is only finished when there is nothing left to take out. 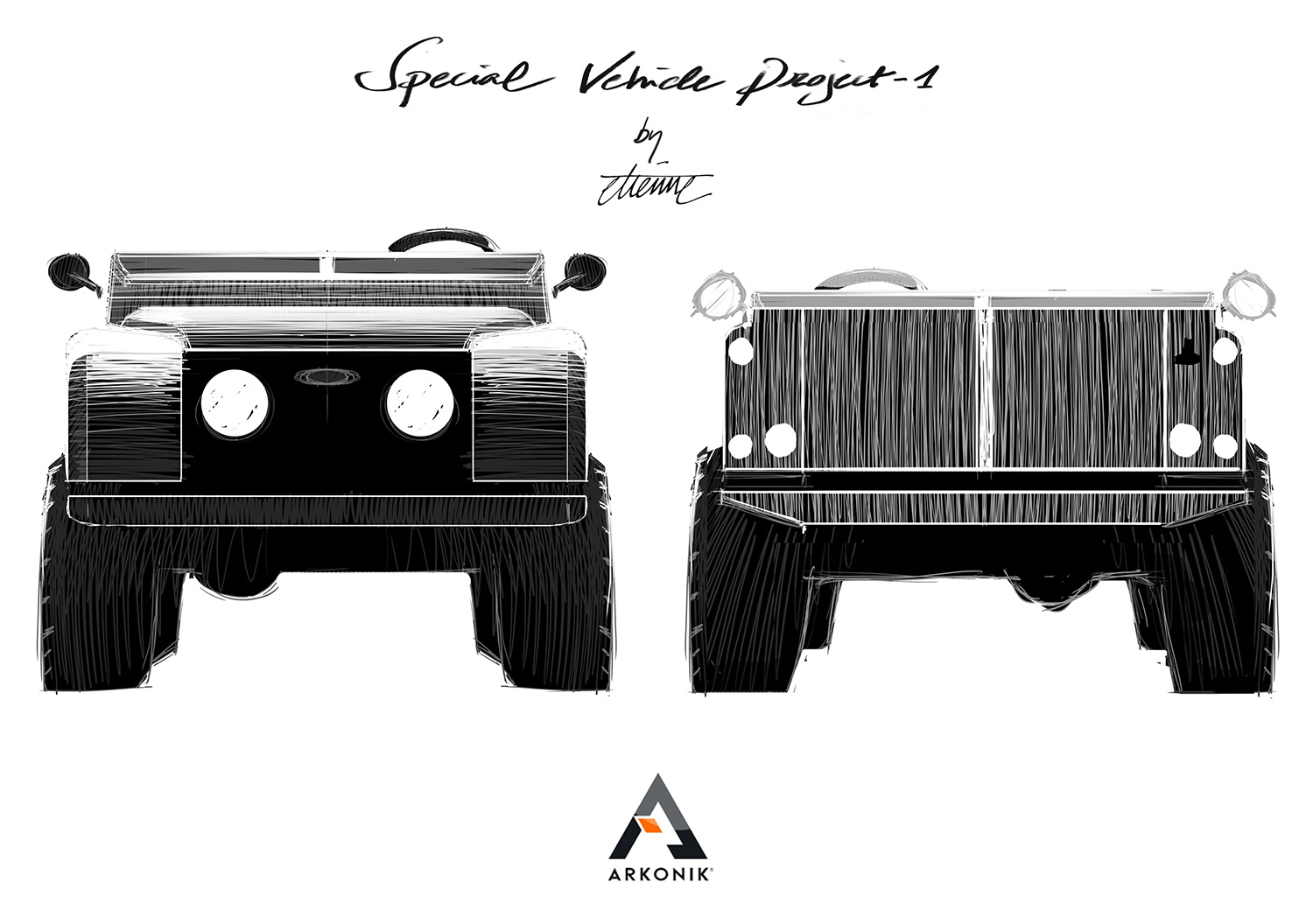 RR: So what have you taken out?

ES: From no more fuel filler, to no more door handles to the bonnet and no tyre—these days I don’t need a spare tyre, I have a quick fix, and so I don’t need it, I want to see out …

Del Gregory: … It’s completely analogue. The idea that Etienne had and which I favoured as we went through this process was to take out any technology that would be on a modern car…

ES: Yeah, same philosophy—why would I have this? I want to be able to drive and then leave it in my barn and come back a year later because this is the car that I have at
my beach house and I want it to easily start and to go surfing 100 kilometres away or go to the restaurant with my girls—I’m married and have an eight-year-old daughter and so it’s important to me to have three seats, you know.

RR: So you design for yourself first and foremost?

ES: I don’t do this for someone else. Yes, you do a product, something someone else also needs and they can find a connection with it, but I always think in my head, “how would I do this for myself?” … This idea of “high-cycling”—taking something ready for the bin and taking it to the next level [is what we are doing] and also the idea of how do you drive this, what are the feelings you would have when you drive this car—with nothing left outside or inside? In the end we wanted the experience of driving to be intoxicating, it speaks to you—and so it had to be a V8 five-speed manual. You’re really driving with this and you feel the emotion and you feel this machine and this idea of mechanical beauty, like a mechanical watch with the open caseback—yes, this is what we wanted to have.

DG: There’s no plug and play and no stereo —the only apple here is the one you’re going to eat. This is a machine for people who want to get back to what it used to be, but brought forward with Etienne’s design.

RR: It’s raw and a return to the attachment once offered by the automotive industry, before we become too distracted by bells, whistles and
too much technology.

ES: Myself, if I want a car, I don’t want to know where my friends are located on Facebook or have the biggest screen to watch TV while I drive—if I have this car I don’t want those things, I want to look outside and be driving on the beach with it. This car is a digital detox … And I think that if I could have a car like this to give to my daughter when she’s older, I could say, “see, here’s something else, it’s not this dinosaur of the car—it’s a different vision of it.”

RR: So you’ve got this raw machine with a decent donk and stripped-out denim interior—I also heard the steering wheel is a rather unique offering?

ES: This is important as we don’t have an exterior door opener—one of the things that you grab—so the experience is for the touching, I wanted the steering wheel to be thicker and a different feel to all the other models and all the Arkoniks … We were not going to trim it in denim as this is not so nice, so we took the idea of the cords used for paragliding or tactical cords used to carry your weight, and we wrapped the steering wheel with this all the way around. It became unique with a unique feel and also has this idea of being super tough.

RR: So this debut release of the beach cruiser is a run of just five vehicles. And then, Del, you’ve set up a new design studio, B500X, to oversee this as a wider, ongoing offer—what does that actually look like?

DG: The plan is to work closely with Arkonik and their network. They put out a simple teaser at the beginning of this project and had something like 65 very serious inquiries. And then we take it to the next step where Etienne gets involved with the 110 and then maybe the 130 and then possibly the range—but we see this as a limited series of five per model. We all agreed that we don’t want to get into this and say, “hey it’s going so well let’s do 25.” That’s not what we’re about—it’s about a limited number, an exclusive opportunity and these cars that will be around for a long time.

ES: You don’t want to take a Defender to Pebble Beach [Concours D’Elegance], but maybe in 50 years you might with one of these. It’s like a bottle of good wine—it’s just going to get better.

This piece comes from the new Spring Issue – on sale now. Get your copy or subscribe here, or stay up to speed on all things with Robb Report’s weekly luxury insights.