Whenever a Miura comes up for sale, I recall a conversation I had in late 2010 with Stephan Winkelmann, president of Automobili Lamborghini. At the time, a couple of Miura SVs had just sold at auction, each cresting seven figures, so I congratulated him on the marque finally having a million-dollar classic. More than a decade later, through the peaks and dips of a mercurial collector-car market, that Miura train is still gaining steam. Today, a mere million dollars barely buys a Miura basket case.

Not that the model was ever one to be ignored. Astonished onlookers first laid eyes on the P400 Miura at the 1966 Geneva Motor Show, and with its unveiling, Lamborghini’s future classic was born, an aggressive supercar that broke all the rules. It was the invention of three twenty-something visionaries—Gian Paolo Dallara, Paolo Stanzani and Bob Wallace—who worked under Ferruccio Lamborghini in the formative years of the then-new marque, founded in late 1963. 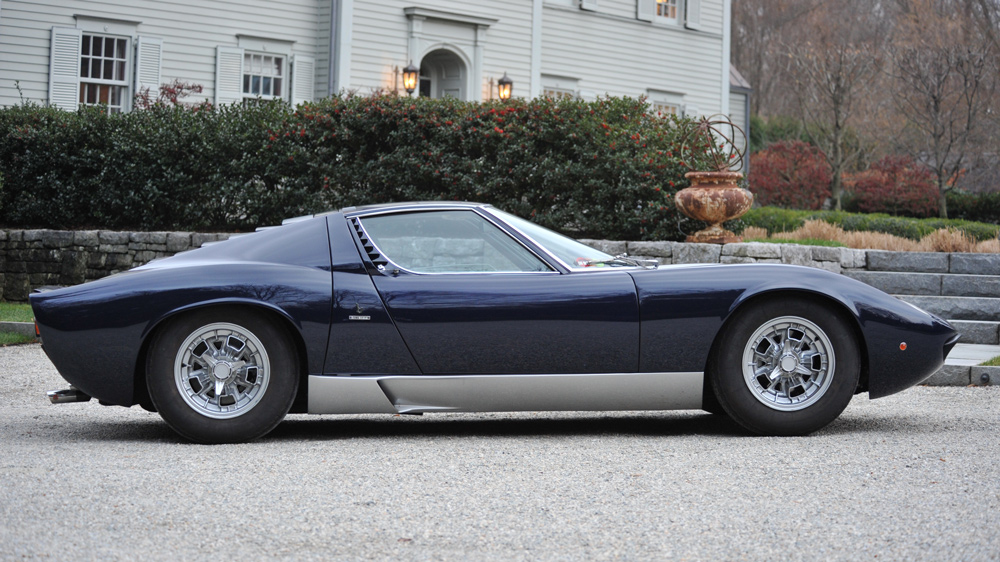 The team’s after-hours project conceived a mid-engine two-seater with its power plant turned sideways, allowing a car of near-perfect proportion and size to be clothed with a shape unlike any other of its day. That latter task was left to Bertone designer Marcello Gandini—also then in his twenties—who went on to create other style-defining supercars like Lamborghini’s famed Countach and Diablo. The P400 model was named to pay homage to Don Eduardo Miura, a breeder of legendary fighting bulls, adhering to Ferruccio’s penchant for giving his cars taurine-themed monikers.

The Miura’s sleek aluminium body—which looks contemporary even today—was built by the Bertone factory in Turin, Italy, then shipped less than 200 miles away to the Lamborghini factory in Sant’Agata Bolognese for completion. Beneath the rear clamshell is a 287kW, 4.0-litre V-12 engine mounted transversely behind the driver in a box-section chassis perforated like Swiss cheese to enhance lightness. 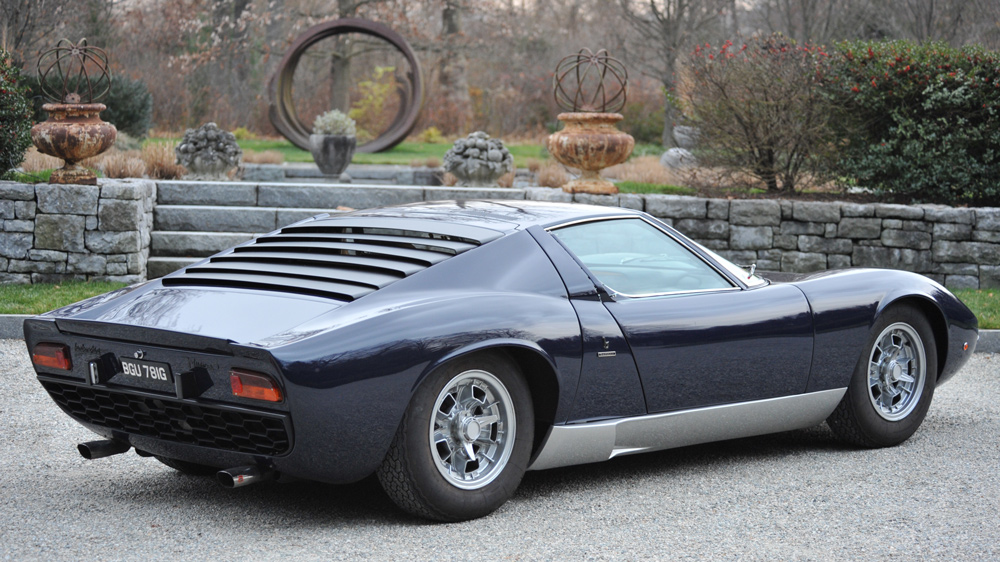 About 763 examples of the Miura were built from 1966 to 1973 and consist of three progressive variants called P400, P400S and P400SV, each with successively greater power and drivetrain enhancements. And in 1970, factory test-driver Bob Wallace conjured an extreme one-off called the Jota, a car that never saw series production. Regardless of the model or its state of tune, the sound of a Miura—especially in full-assault mode—is unforgettable.

First-series Miuras, all of which are P400 versions, are divided into two categories based on the gauge of steel used for the chassis. The initial run of “thin chassis” cars used steel that measures 0.8 mm in thickness. In an effort to give greater structural rigidity, the gauge was increased to 1.0 mm for the “thick chassis” cars. As documented in Simon Kidston’s recent catalogue, The Lamborghini Miura Register, the 263rd Miura produced bears chassis No. 3739 (and engine No. 2502), and was shipped from the factory on October 30, 1968 to Switzerland. It was originally finished in Bleu Miura with a Gobi (tan) interior. 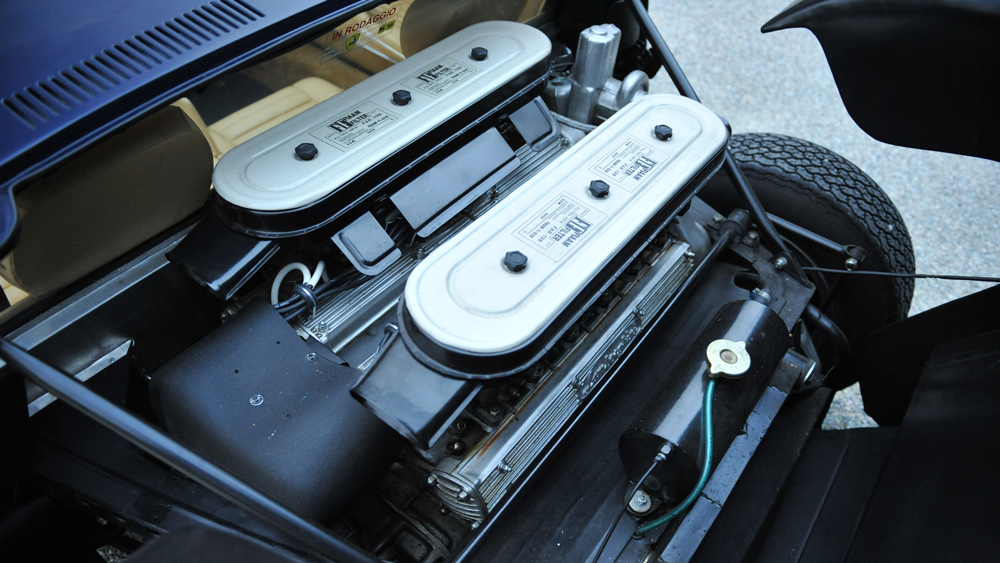 Beneath the rear clamshell is a 287kW, 4.0-litre V-12 engine. Photo: Courtesy of Collectors Garage.

Factory build records on file show that the thick-chassis car was specially commissioned by its owner with wider wheels, special lighting and horn and a quieter exhaust. Combined production of thin- and thick-chassis P400 Miuras totalled 275 units, including five prototype and pre-production examples. Of that total, blue cars amounted to only about 10 per cent of production, whereas the more common Rosso Miura (red) and Giallo Miura (yellow) shades accounted for well over 100 cars. 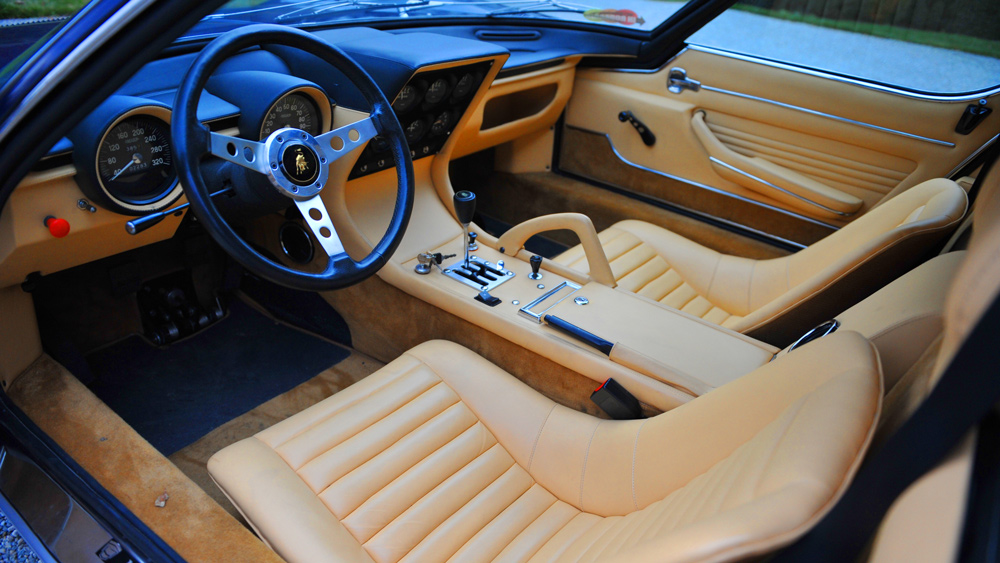 The pristine interior of a car that retains comprehensive factory records, restoration correspondence and receipts. Photo: Courtesy of Collectors Garage.

In 2005, chassis No. 3739 underwent a three-year restoration at the Lamborghini factory, predating the automaker’s Pollo Storico restoration division. The vehicle’s owner at the time insisted on the direct oversight of this restoration by Valentino Balboni, Lamborghini’s now-retired chief test driver. In a letter following the completion of the restoration, Balboni wrote, “It has been a very long and accurate process, but necessary to achieve expected quality standards and maintain originality.” The car has since been refinished in the factory colour of Bleu Notte (Night Blue). It retains a comprehensive history file, which also includes restoration correspondence and receipts.

This Miura is offered for sale at approx. $2.48 million by Collectors Garage, a new name in the business comprising members formerly with RM Sotheby’s. The team, operating within the Broad Arrow Group, has a combined 100-plus years of experience in the industry.