There are Ferraris, and then there are Ferraris. One of the most sought-after comes up for sale at Gooding & Company’s Pebble Beach Auctions to be held on August 13 and 14. With Monterey Car Week scuttled in 2020, there is a lot of pent-up demand to see and buy great cars, and this year’s auctions—more like a world-class concours event where everything is for sale—will not disappoint buyers in the market for the best-of-the-best. In fact, along with this vintage Ferrari, other significant offerings at the Gooding sale include a 1957 Maserati 200 SI, a 1958 BMW 507 Series II, a 1961 Aston Martin DB4 GT, a 1963 Mercedes-Benz 300 SL Roadster (one of the final examples built), and an ultra-rare 1998 Mercedes-Benz AMG CLK GTR Strassenversion.

“This selection of cars, from the Ferrari 250 GT LWB California Spider Competizione to the Mercedes-Benz AMG CLK GTR Strassenversion, is an especially enthralling group bound to catch the eye of any enthusiast or collector,” says Gooding & Company president and founder, David Gooding. “We are incredibly thrilled to return to our live auctions this year at Pebble Beach.” 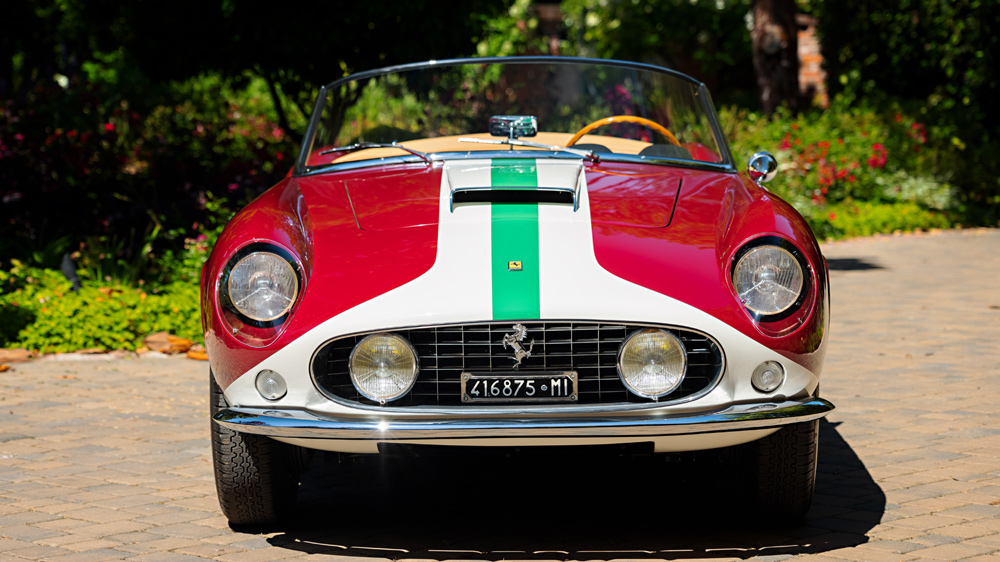 Among 1950s- and early 1960s-era sports cars, the ones in Ferrari’s 250 series, with their V-12 power and unmistakable Italian style, are at the top of collectors’ lists. Of those, the California Spider looms large, and some examples more than others. The 1959 Ferrari 250 GT LWB California Spider Competizione soon available is one of them.

Created as an open-top counterpart to the 250 GT Tour de France Berlinetta, the California was developed for the growing North American market at the urging of Ferrari’s West Coast representative John von Neumann. Between 1957 and 1962, Ferrari built just 106 California Spiders on two chassis variants: a total of 50 examples on the original long-wheelbase (LWB) followed by 56 of the later short-wheelbase (SWB). The LWB variants are most desirable, and as with other models in the 250 range, all were built on the contemporary 250 GT chassis, with bodies supplied by Carrozzeria Scaglietti. 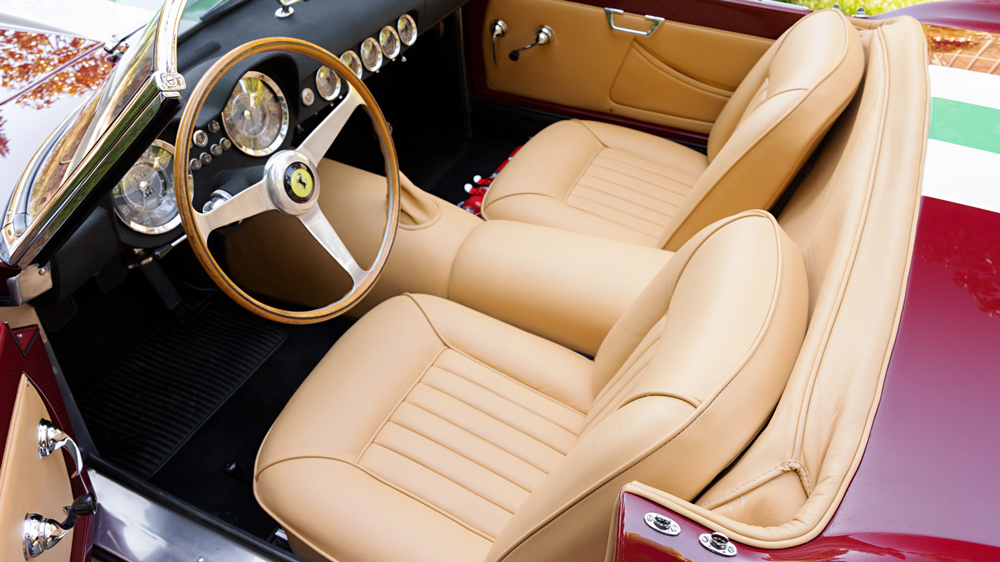 The pristine, left-hand-drive interior of chassis No.1235 GT. Photo by Brian Henniker, courtesy of Gooding & Company.

Of the 50 examples of the LWB California Spider built, only about 10 were originally supplied with the rare competition features found on chassis No.1235 GT, and in the spirit of hand-built Italian competition cars of the era, no two examples are the same. Along with the preferred covered-headlight design, important factory-competition features include velocity stacks and a cold-air box atop three Weber 36 DCL3 carburettors. The 2,953 cc Tipo 128D SOHC V-12 engine developed 253 bhp at 7,200 rpm on the factory dyno, and is fitted with hi-lift cams and a four-speed competition gearbox housed in a ribbed aluminium casting for improved cooling under load.

At the rear, a limited-slip differential, a long-range fuel tank and an external fuel filler punctuate the vehicle’s competition credentials. Important to Ferraristi is originality, with correct number stampings topping the checklist. According to factory build sheets, chassis No.1235 GT retains its matching-numbers engine, gearbox and differential. 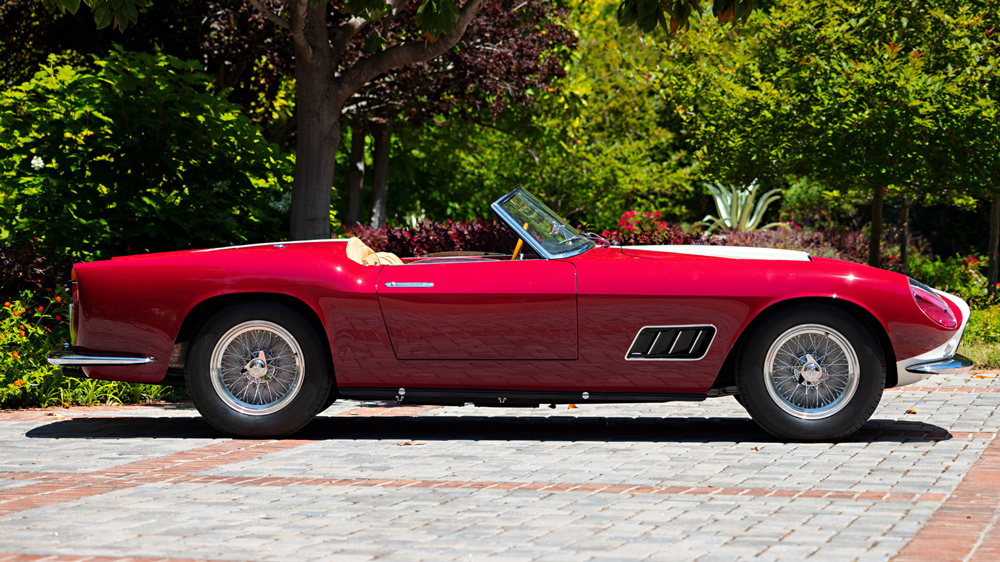 Only about 10 cars were originally supplied with the rare competition features found on this Ferrari. Photo by Brian Henniker, courtesy of Gooding & Company.

Most 60-year-old cars, especially those that were involved in racing, have gaps in their ownership, often spanning decades. Remarkably, the provenance of this California Spider reveals an unbroken history of 11 owners, beginning with Ottavio Randaccio, an amateur racer from Milan, who bought the car new in 1959. Though its motorsport career was brief, the Ferrari enjoyed some success in Italian hill-climb events, taking a couple of first-in-class wins with Randaccio behind the wheel. Randaccio also took fifth place overall in the Coppa Inter-Europa di Monza in September of 1959. 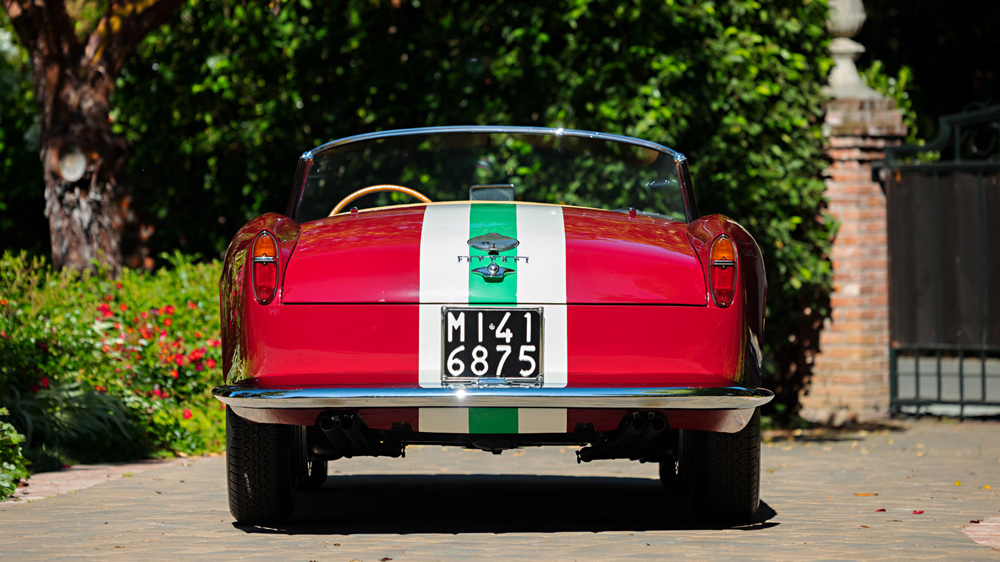 The vehicle has been restored and painted with its original tricolor livery. Photo by Brian Henniker, courtesy of Gooding & Company.

Notably, while American motorsport success for the model in general included class wins at Bridgehampton, Watkins Glen and the 12 Hours of Sebring, few competition-equipped California Spiders were delivered and raced in Europe, making this car especially rare. Immediately following his last race, Randaccio sold the car in October, 1959, to Giuseppina Piatti in Bergamo, and by 1960, it had found yet another owner. The Ferrari stayed in Italy through a succession of six additional stewards until being sold to Californians Charles Betz and Fred Peters in 1999, from whom the consigner acquired it in 2004.

The example on offer was first published by the factory in its 1959 Ferrari Yearbook, and has been featured in the publications Ferrari Spyder California by Stanley Nowak, Modena Racing Memories by Graham Gauld and The Spyder California: A Ferrari of Particular Distinction by George M. Carrick. 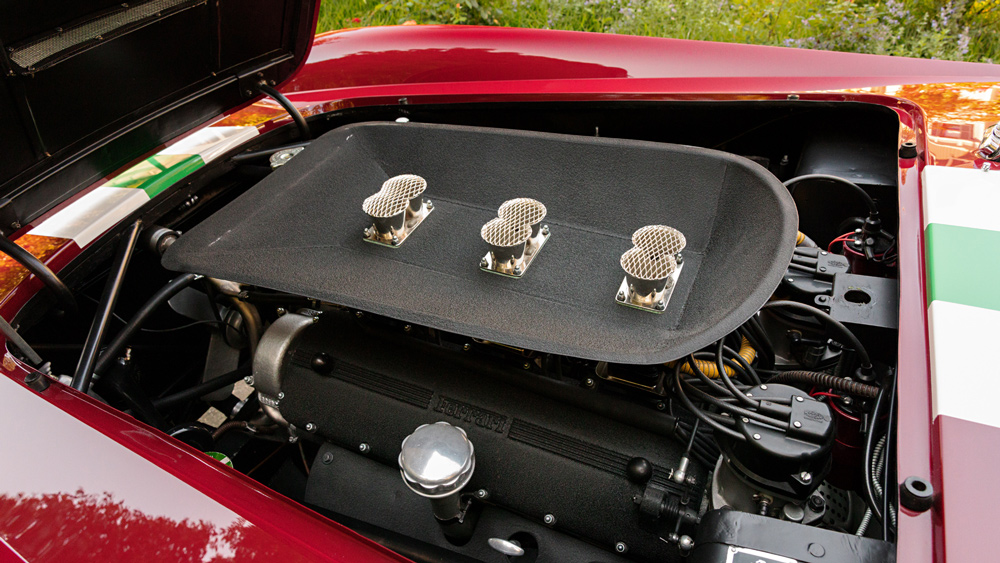 Recently restored and painted with its original tricolour livery—a beautiful period embellishment—the car is accompanied by a Massini Report verifying its originality and specification. It also comes with an extremely rare, unrestored hardtop along with many period photos and supporting documentation.

As with other important automobiles, this one has been followed by Gooding & Company for a considerable amount of time, the team even assisting the current owner with its acquisition 17 years ago. So, it only seems right that the auction house should be the one to have this particular Prancing Horse cross the block at Pebble Beach next month.