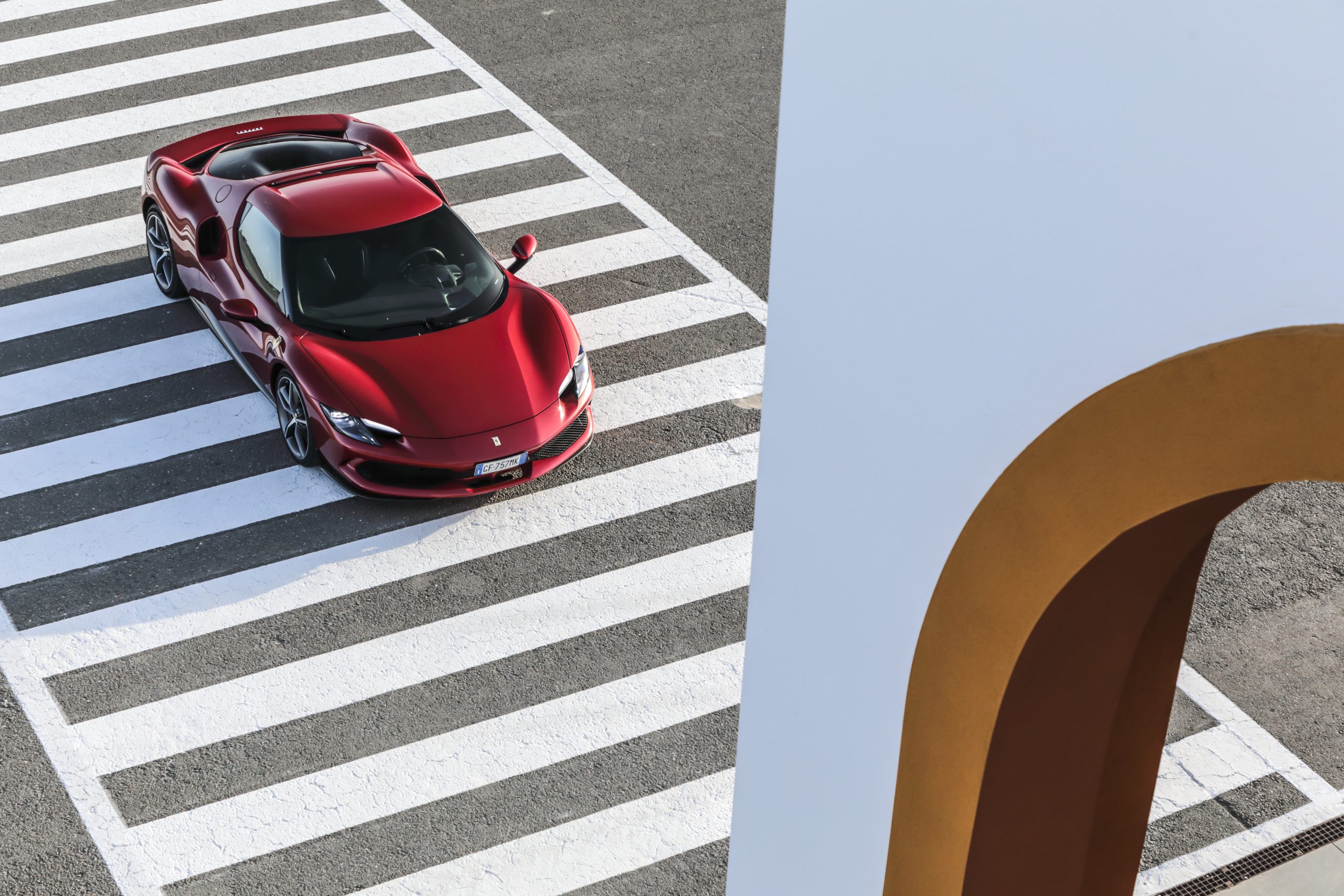 The Italian marque proves a V6 can more than hold its own.

Occasionally, I’m so deeply affected by driving a new car—particularly one as ballistically blessed as Ferrari’s 296 GTB—that I exhibit strange behaviours.

After two days in Spain, being almost as thrilled that I was in a foreign country again as I was by driving a street-legal vehicle with 50 per cent more power than a Bathurst-bothering V8 Supercar, I found myself Googling photos of Brad Pitt and Angelina Jolie’s children.

This is because the first thing that hits you about the new plug-in super hybrid Ferrari is not the shock about how anything with a V6 engine and an electric motor can sound that good—that comes a few minutes later—but how wallet-achingly beautiful it is.

Ferrari has made many delectable machines in the past, and they’ve been on a particularly fine run of form since Flavio Manzoni took over as chief designer in 2010. But with the stunning, perfectly formed shape of the 296, with its nod to classics past combining so stunningly with modern touches like its rear light cluster, the aerodynamic “t-tray” at the front and the flying bridge behind the driver’s head, he has outdone himself. 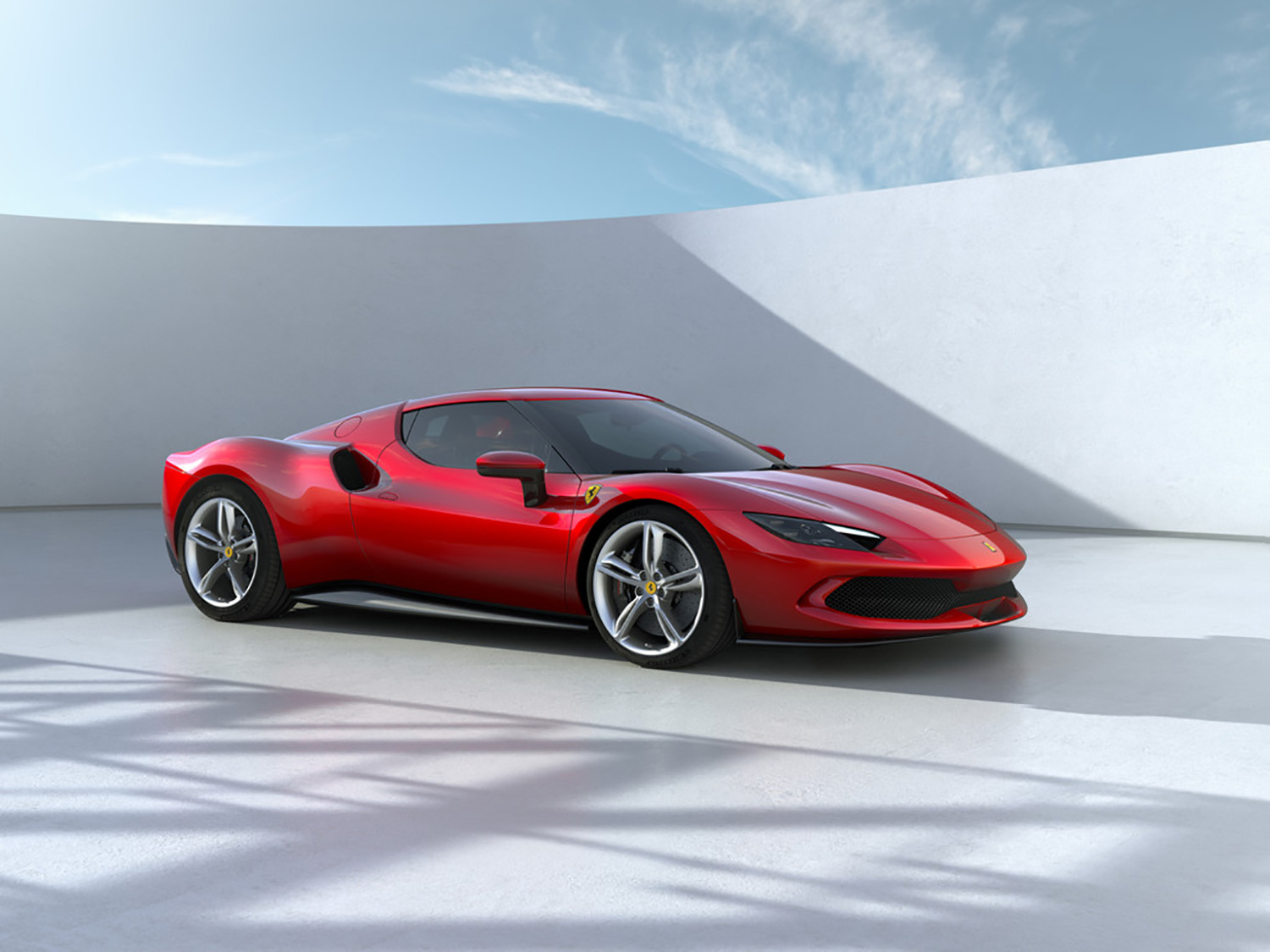 Is it possible that the DNA of Ferrari, its bloodlines, make it likely that each new car will be more beautiful than the last? Well, no, the Jolie-Pitts aren’t anywhere near as attractive as DNA would suggest, and you could argue that the 488, and certainly cars like the California, were not as worthy of awe as the 458 Italia.

But to hear Manzoni talk about this car, you know that he knows he’s achieved something special. He says he was “striving for beauty and perfection” and was on a “quest for purity, for supreme essentiality, a tight, bold personality” and a “truly athletic, sporty body”.

“And when I say ‘sporty’, I mean a very refined and sophisticated expression of sportiness,” Manzoni went on. And on. 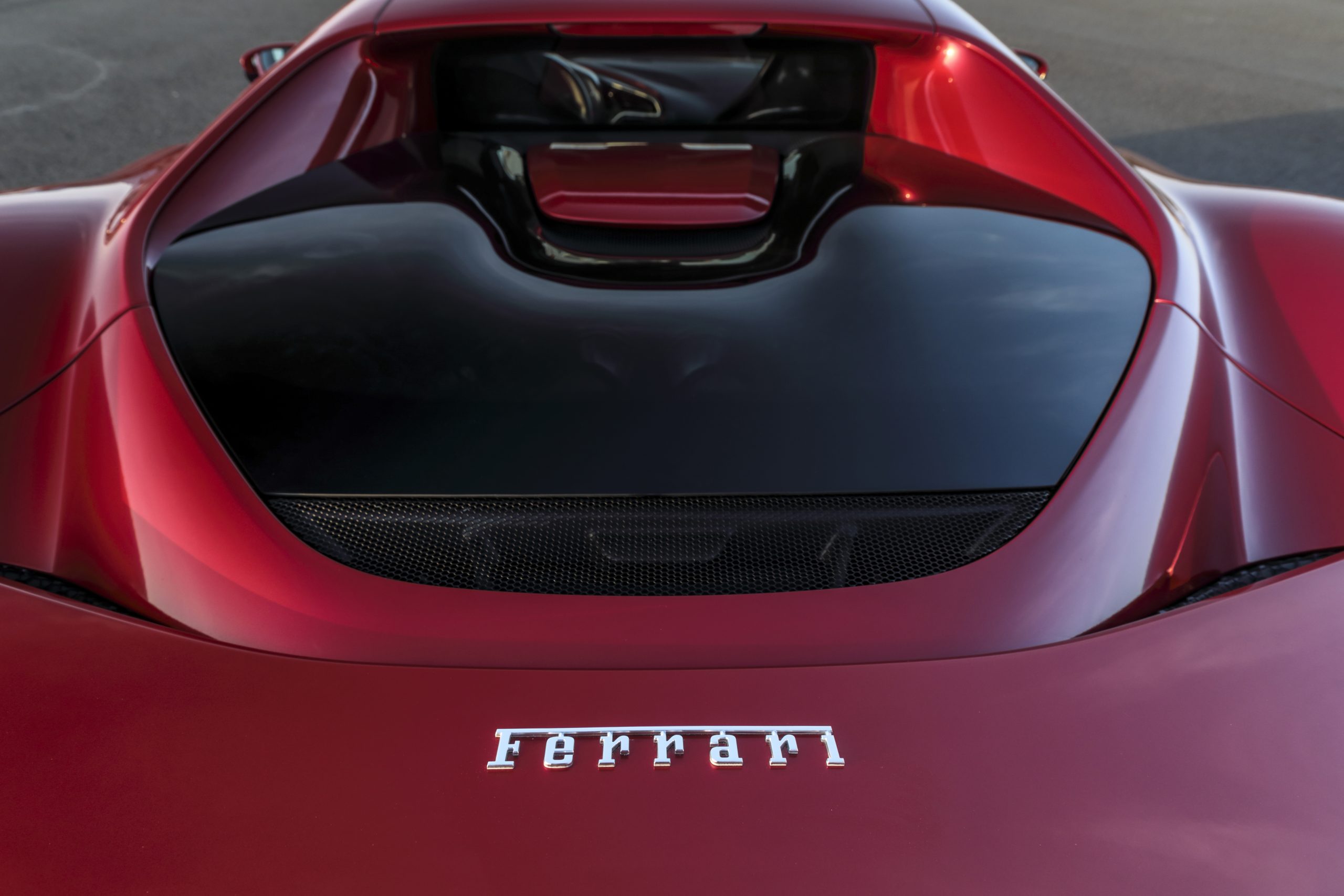 I love the way the man speaks about car design, but I love his work even more. In essence, while the lines are lovely, I think the reason the 296 looks so right is that it is just the right size. It is less overt than the insane SF90, with which it shares not only its hybrid technology but its cabin design, but also even smaller —lower, lighter and much shorter in the wheelbase—than the F8 Tributo.

And it’s also that short, sharpness of shape that helps to make it feel as though this car is wrapped around you, that it is an MX-5-like, glove-like, Alfa Romeo 4C-esque expression of go-kart-style connection with the road, and corners in particular, only with the grunt (and grin) factor turned up to 11 … thousand.

Truly, this is power that is hard to imagine, and which even the numbers I’m about to tell you struggle to express. By combining the instantaneous torque shove of a battery (which you can charge just like any other PHEV) and an electric motor with a high-tech and high-revving 3.0-litre V6, the 296 delivers 610 kW and 740 Nm (plus 315 Nm from the electric motor).

That’s a staggering 80 kW more than the V8-powered Ferrari F8 Tributo, a car that already left us quivering with a mix of excitement and fear, and it’s even more impressive than what you’ll find in the epic and enormous V12-powered 812 Superfast (588 kW and 718 Nm).

By using that smaller, lighter power plant, of course, the 296 also manages to be smaller, sharper, shorter in the wheelbase than either of those two Ferraris, and super-light as well, at just 1470kg. I’ll give you a moment to do the power-to-weight calculations in your head (here’s a clue, the answer is “Oh. My. God.”).

And all that means it feels pointier and easier to drive than previous mid-engined Ferrari wonder cars and, quite honestly, more enjoyable and less furiously intimidating than one of the few cars in the world that can significantly better its zero-to-100km/h time of 2.9 seconds, the SF90, which uses a similar powertrain set-up, but has two electric motors instead of one.

Honestly, as much as we’ve raved about the SF90 in these pages before, it’s almost too much car for public roads, whereas perhaps the most remarkable thing about the 296 GTB is how easy it is to drive, even in everyday conditions, and at great pace. 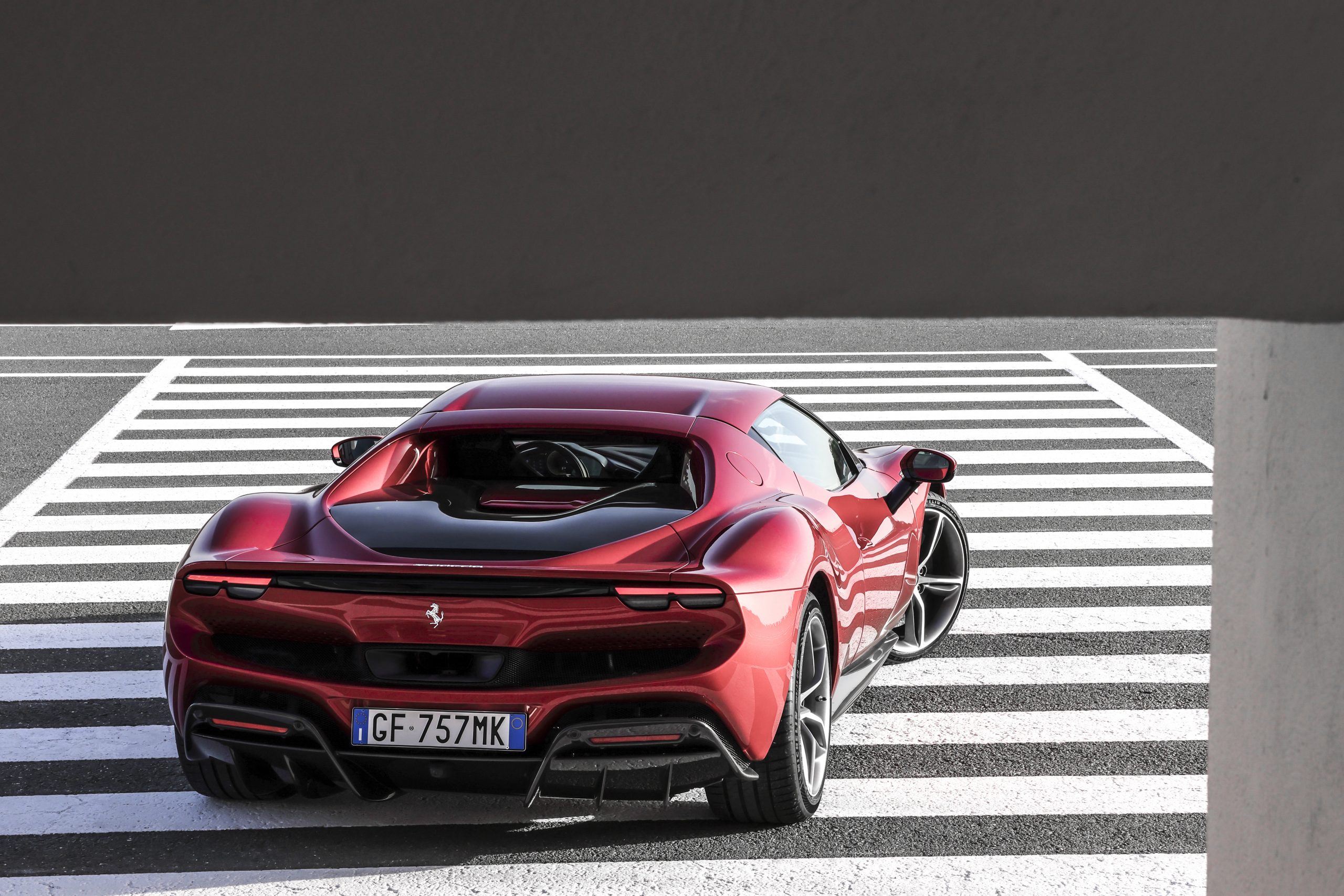 That much power going to the ground through the rear wheels alone should be monstrous and hairy-handed, yet it never, ever felt like it was going to break away at the rear (some serious downforce—like 350 kilograms of it at 200 km/h obviously helps) even though I was pushing it harder than I’ve ever done in any road car, and despite the fact that the rain in Spain on that day was falling mainly on us.

(I must admit that I had an issue with losing the rear end, slipping off a race track and on to the grass the next day in the even more hardcore Assetto Fiorano version—which will sting you another $73,299—but that’s another story, and
one I’m still too shaken to tell right now.)

As the roads dried up in the afternoon, however, I experienced a kind of motoring nirvana that I may have come close to before, but has never been on such a heightened plain as in Spain. The roads were winding, smooth and empty, the scenery bucolic, but that was only part of it. The way this car accelerates and handles, combined with its brilliant new steering system (a stiffer and even more precise set-up Ferrari says is the steering standard from which all of its new models will begin), its incredible traction-maintaining software and a V6 that sounds so bellowingly bassy that the engineers refer to it as “the piccolo V12”, created an experience I will never forget. 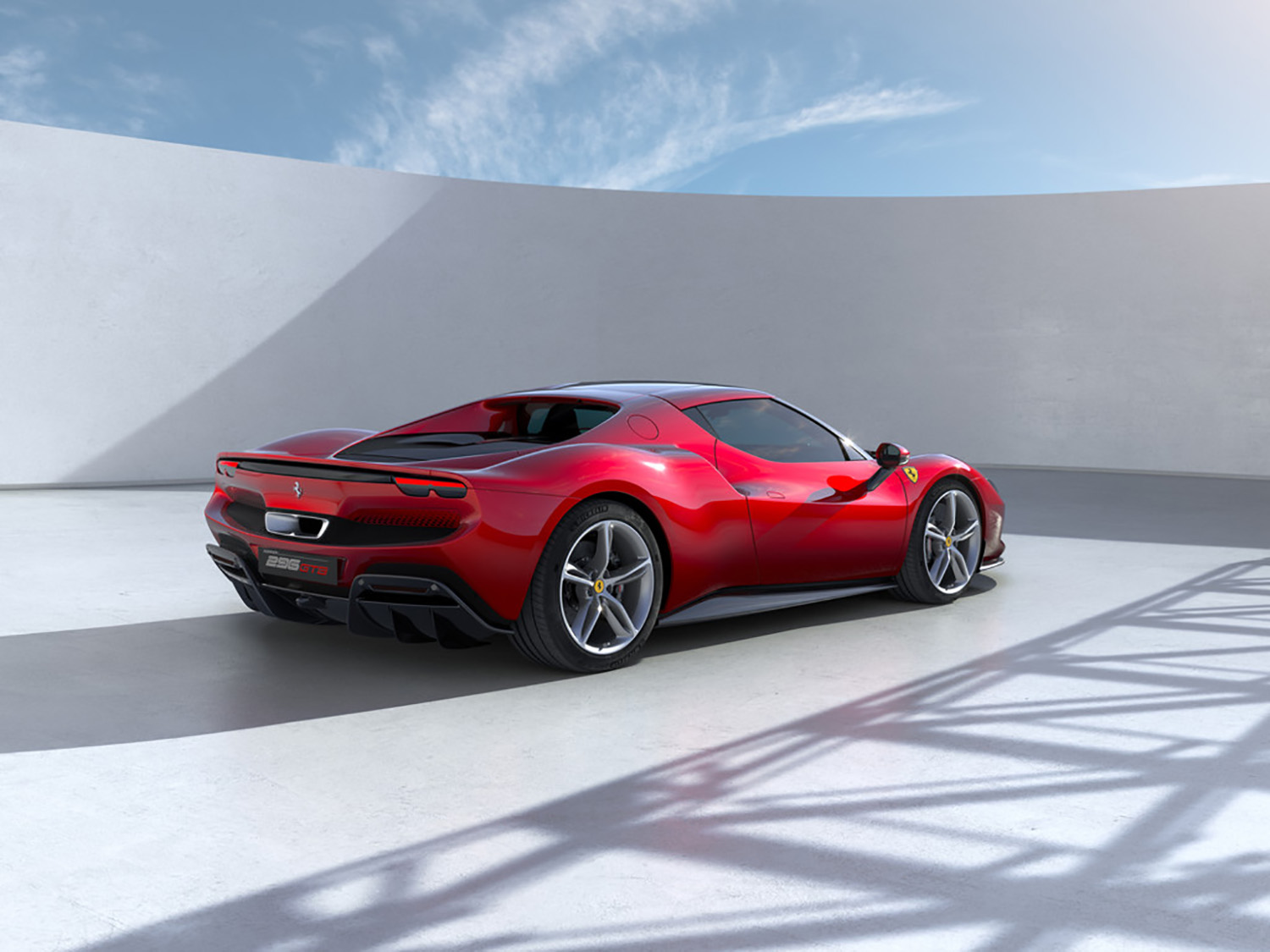 Then there is the tech, which appeals to my inner nerd violently. While the 296 starts up in silent mode, and then progress through Hybrid, where it occasionally shuts off the motor and leaves you in unsettling Italian silence (two words you never normally see together), the battery is only good for 25 kilometres of full EV driving (at speeds of up to 135 km/h). What is sheer genius, however, is that the Ferrari uses not just the usual braking-regeneration tech to recharge that battery as you drive, but the excess torque you create while hammering it, which means the harder and faster you go, the more your battery recharges.

So, effectively, driving like a maniac is actually a green thing to do. Kind of. What it really means is that when you switch to Qualify mode, you enjoy the full benefit of the engine and the battery all at once, which was enough to launch us with ease to 270 km/h down the straight at the Circuito Monteblanco outside Seville.

It’s all fiendishly clever and, as Ferrari’s engineers candidly admit, the PHEV approach here is very little to do with being green and everything to do with performance. Add to all this the inarguable factor of how stunning the 296 GTB is to look at and you can begin to understand why, for the first time ever, and as much as I’ve loved the company’s previous efforts, this is a Ferrari I really, deeply want to own.