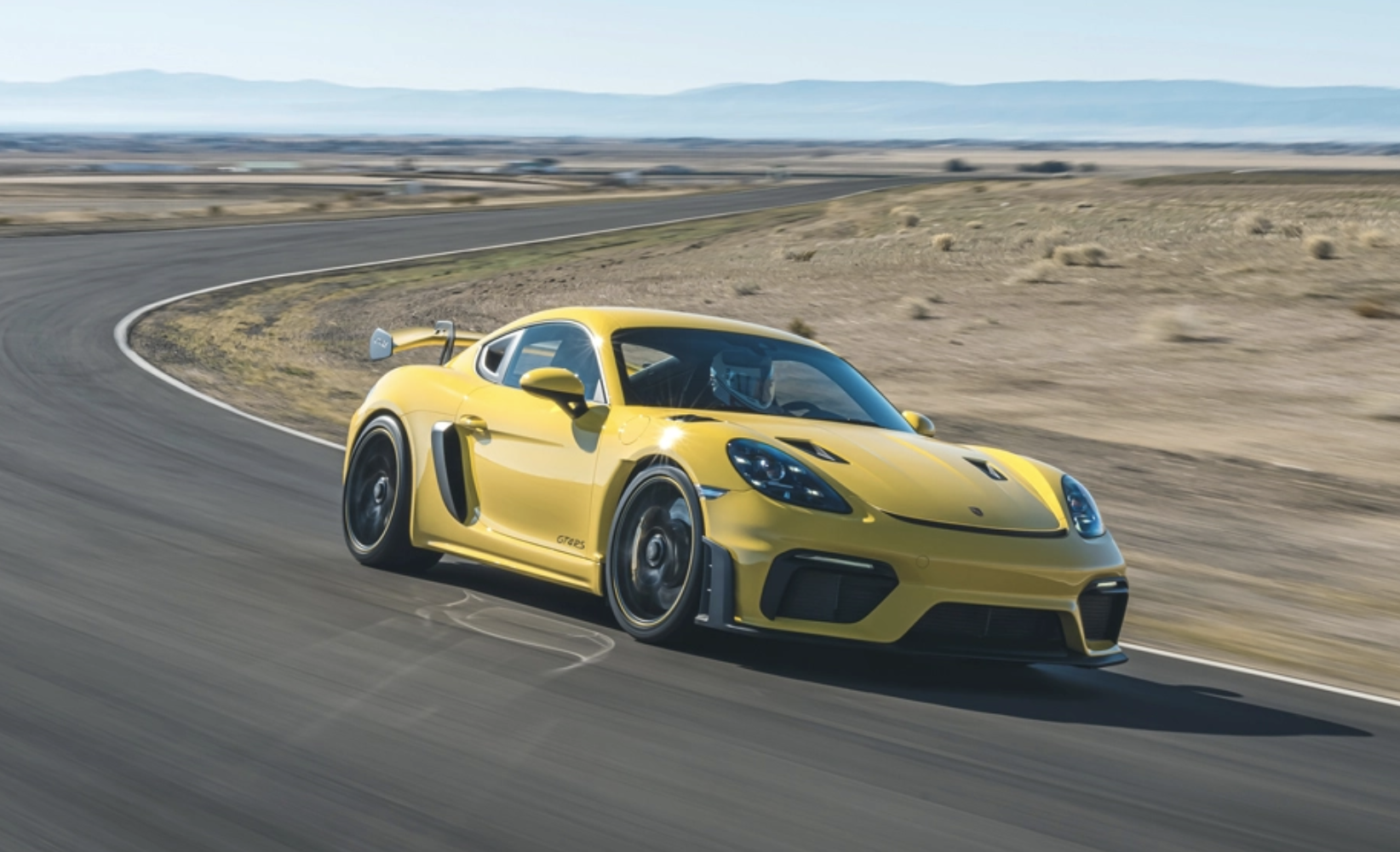 With the same power plant as a 911 GT3 Cup race car, the flagship 718 variant is for those who love it loud.

Porsche, continuously accused of hampering its mid-engine Cayman to protect its flagship rear-engine 911 Carrera, has just silenced the mob. The new 2022 Cayman GT4 RS, fitted with the GT3’s mighty power plant and a multitude of performance enhancements, conclusively represents the nth degree of the fourth generation (982-series) Cayman chassis development—and the result is strikingly spectacular.

Passers-by will immediately recognize the new flagship of the Cayman lineup by its prominent three-stage adjustable swan-neck rear spoiler, four-stage adjustable front diffuser, air vents on the top of the fenders and NACA ducts on the front hood—all highly functional. Most will also notice that Porsche has replaced the Cayman’s two-side rear windows with air intakes that channel air into the central airbox engine compartment, just aft of the passenger compartment. 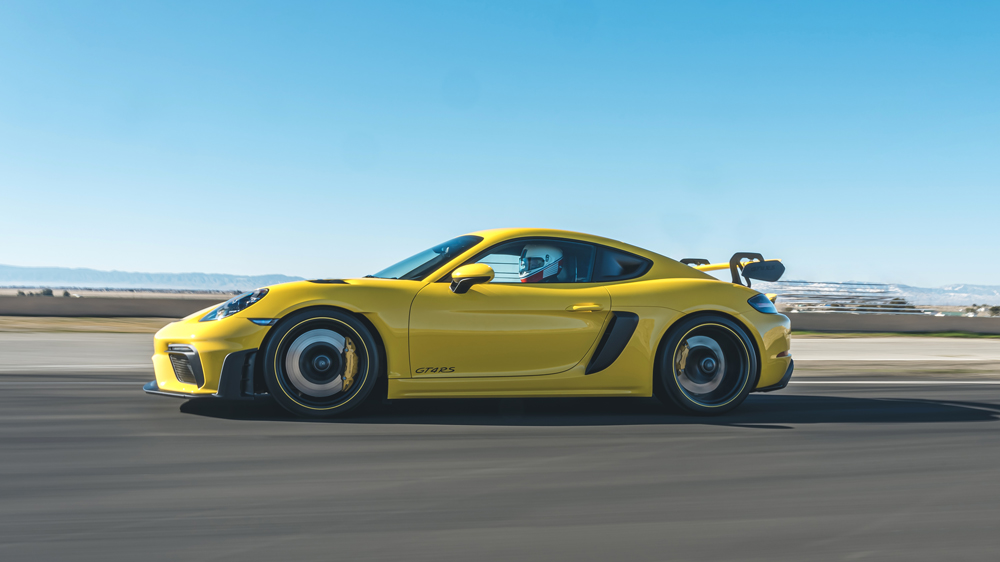 Less obvious to the eye are the new lightweight carbon-fibre-reinforced plastic (CFRP) fenders and hood (which are painted on the standard models), lightweight glass, reduced sound deadening and light carpets. In addition, the interior of the GT4 RS boasts standard carbon-fibre bucket seats, lightweight door panels (with pull straps) and a sport steering wheel with a yellow top centre marking—informing the driver, at a glance, the direction of the front wheels.

Mid-mounted low and just aft of the two occupants’ seats is Porsche’s celebrated 4.0-litre, flat-six, dry-sump power plant, identical to the one that powers the GT3 road car and the Porsche 911 GT3 Cup race car. However, while the engine is the same, chassis architecture dictated that the power plant had to be spun 180 degrees—the transmission is in the rear in a Cayman. This necessitates a longer exhaust run, forcing the exhaust pipes to travel up and over the rear axles, reducing power. As a result, the 4.0-litre engine develops 367kW at 8,400 rpm, and 448Nm of torque at 6250 rpm. 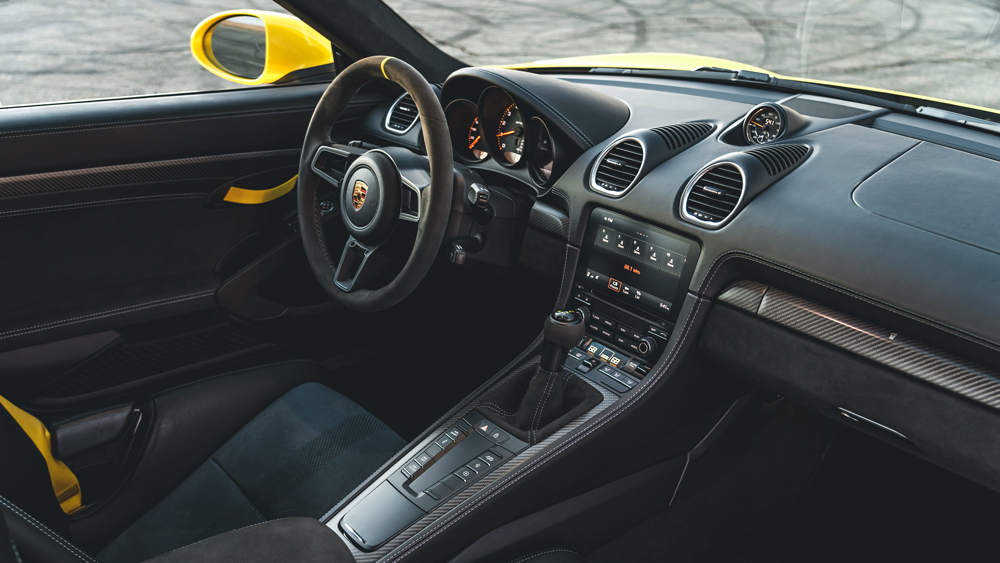 Porsche fits the GT4 RS with a standard seven-speed dual-clutch PDK gearbox to maximize the engine’s potential. The ratios are short—the top speed of 196 mph is reached in seventh gear—and the PDK is tuned to shift within milliseconds without interrupting the engine’s output. (Porsche won’t offer a manual transmission for the model variant because humans are simply too slow for this race-tuned vehicle.)

Complementing the power train is an RS-specific damper setup with modified springs, new anti-roll bar rates and ball joints in the linkages (removing the elastic urethane bushings improves handling precision). In addition, Porsche Active Suspension Management (PASM) is standard, the body has been lowered by 1.18 inches (a powered nose-lift system is offered for the first time on a Cayman) and the front and rear tracks have been widened. 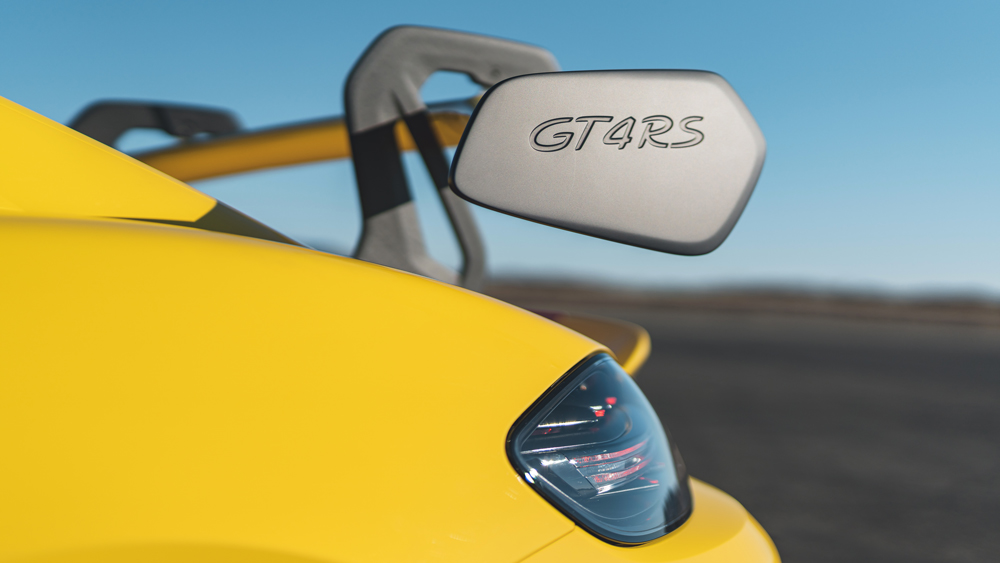 Compared to those on the standard GT4, the six-piston brakes are upgraded with larger iron/aluminium brake discs. And NACA ducts on the hood feed cooling air to the front callipers. The four-piston rear brakes are shared with those on the road-going GT3, and standard 20-inch wheels are crafted from forged aluminium. Those who plan on racing their GT4 RS will want to opt for the upgraded Porsche Ceramic Composite Brake (PCCB) system—which weighs about half as much as the standard brakes—and the even stickier Michelin tires.

For the most discerning buyers, Porsche offers a Weissach Package that replaces several panels with visible carbon fibre and swaps out the standard exhaust tips for those made from titanium. Vehicles with the Weissach Package can also add featherweight magnesium wheels (saving about 10kgs of unsprung weight) as a bonus. 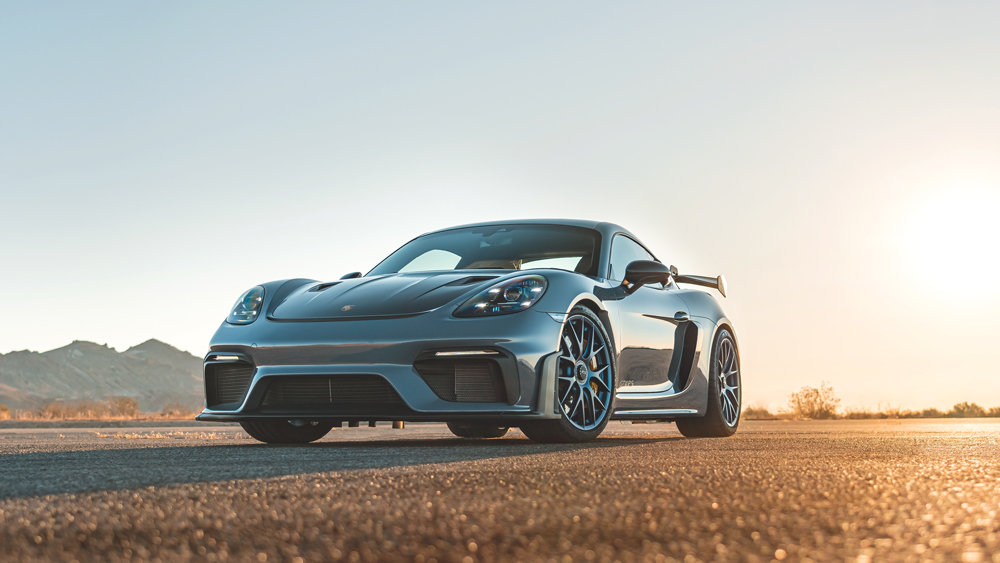 On paper, the Porsche GT4 RS looks stunning. The standard curb weight is a slender 1463kg (22kg lighter than the 718 Cayman GT4), and Porsche has announced that the vehicle has lapped the challenging Nürburgring Nordschleife in 7:09.30 minutes (23.6 seconds quicker than the Cayman GT4). Purists will be interested to learn that today’s 911 GT3 is still about 15 seconds faster around the ‘Ring; credit the more advanced 992-series chassis and double-wishbone suspension, not the slight horsepower difference.

Eager to put the GT4 RS to the test, we climbed behind the wheel at the Streets of Willow Springs track at Willow Springs Raceway, north of Los Angeles, where we were offered laps in both the standard and Weissach-equipped models. 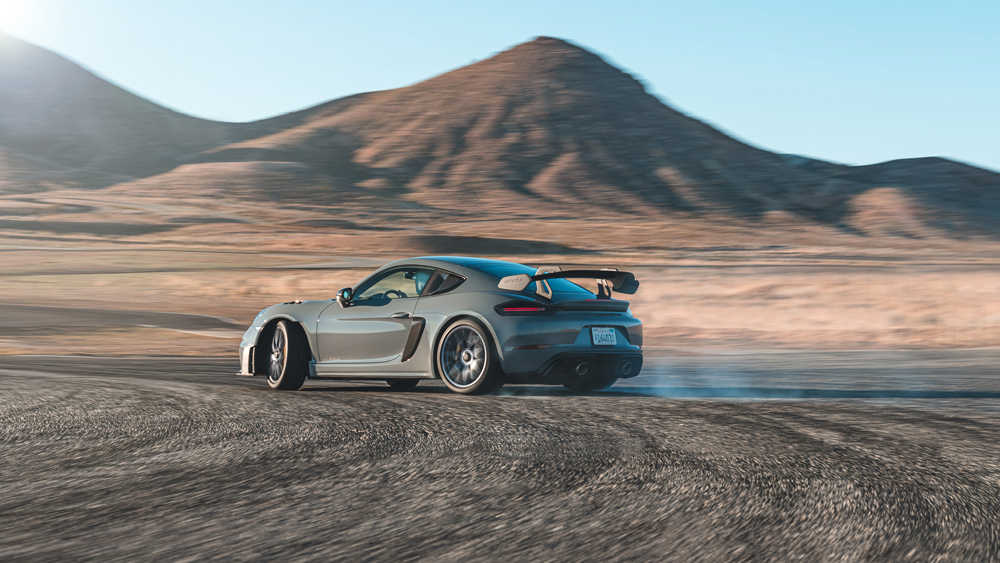 It’s not surprising that the GT4 RS, which boasts a GT3 engine, does not sound like a GT3. Due to the extended exhaust plumbing, the engine at idle is quieter, less raspy and doesn’t appear chock-full of restrained anger like its rear-engine sibling. Yet once the engine moves off idle, it immediately comes to life. The characteristic sound of the flat-six floods the cabin through the unique intake path. The noise, best described as a buttery-smooth mechanical wail, is so loud at the engine’s 9000 rpm redline that it borders on deafening—likely the loudest passenger cabin that Porsche has ever offered. In fact, occupants will swear that the unique twin intake tubes, bellowing the engine’s melody, are powered by amplifiers. 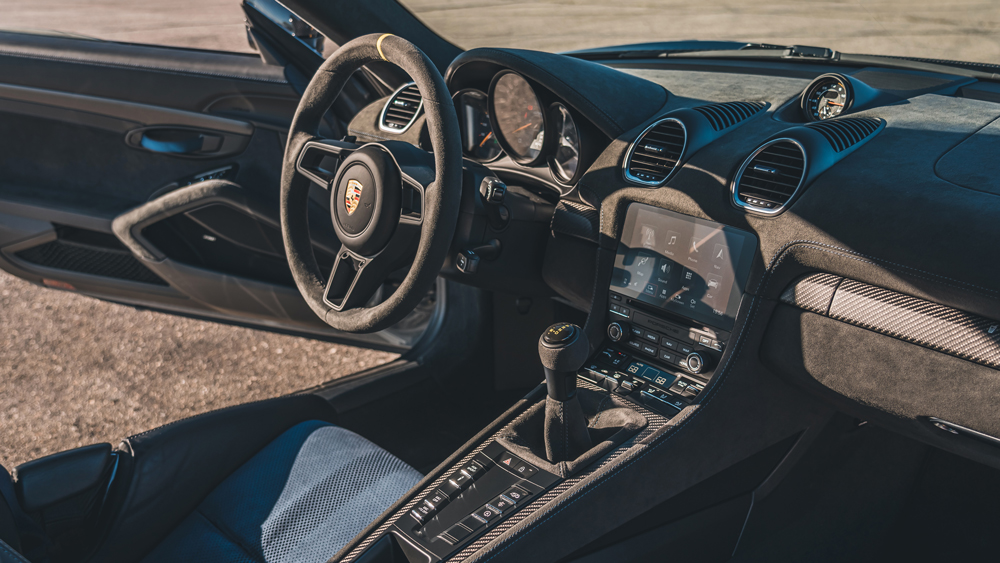 Porsche claims a zero-to-97km/h sprint in 3.2 seconds (with the help of launch control), and it feels even quicker as the flat-six explodes toward redline with each rapid-fire shift; the tachometer needle appears challenged to keep up. Although down on torque compared to its turbocharged rivals, the GT4 RS seems to benefit from the lack of forced induction in that it helps the free-breathing mill when it comes to immediate throttle response. Moreover, the relationship between the engine and the driver’s right foot becomes wonderfully telepathic. 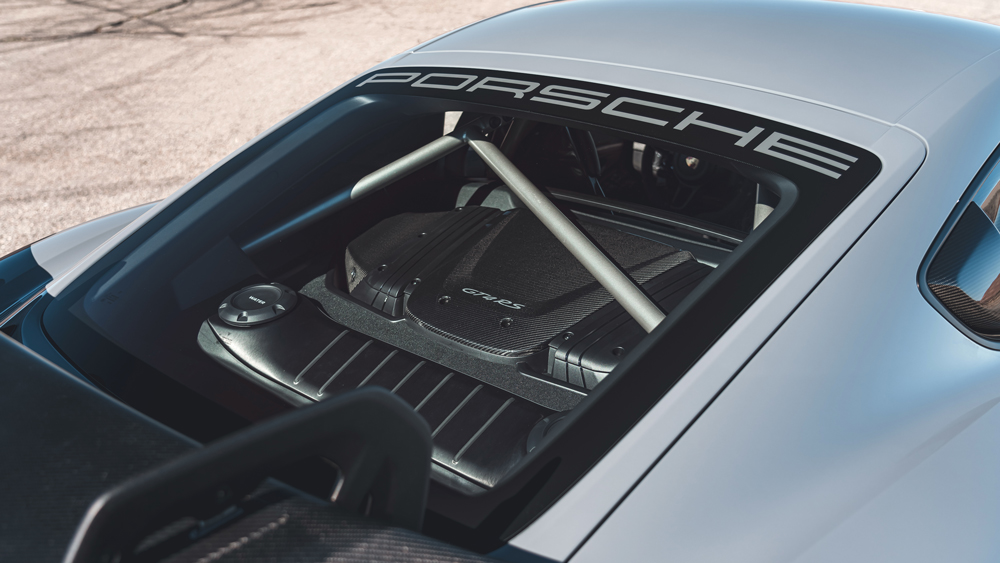 Steering on the GT4 RS is equally as faultless, with a weighted effort and steering ratio that feels perfectly paired for the vehicle’s size and focused mission. There’s tactile feedback through the wheel for the driver to sense available grip, and minor course corrections only require a few degrees of steering input. The car’s balance is phenomenal, allowing us to try multiple lines through challenging corners without upsetting the chassis—and even when we did, Porsche Stability Management (PSM) silently provided aid to ensure the rear tires would get back on the racing line.

It isn’t often that we sample a street-legal sports car that is this capable and easy-to-drive at high speeds, and that’s a massive compliment to Porsche’s development team. Yet it’s important to remember that this performance comes at a price (above and beyond the vehicle’s $300,800). Passenger comfort and amenities are secondary as the GT4 RS is a track-focused machine that has been specifically tuned for a competitive environment. It has been engineered to win. 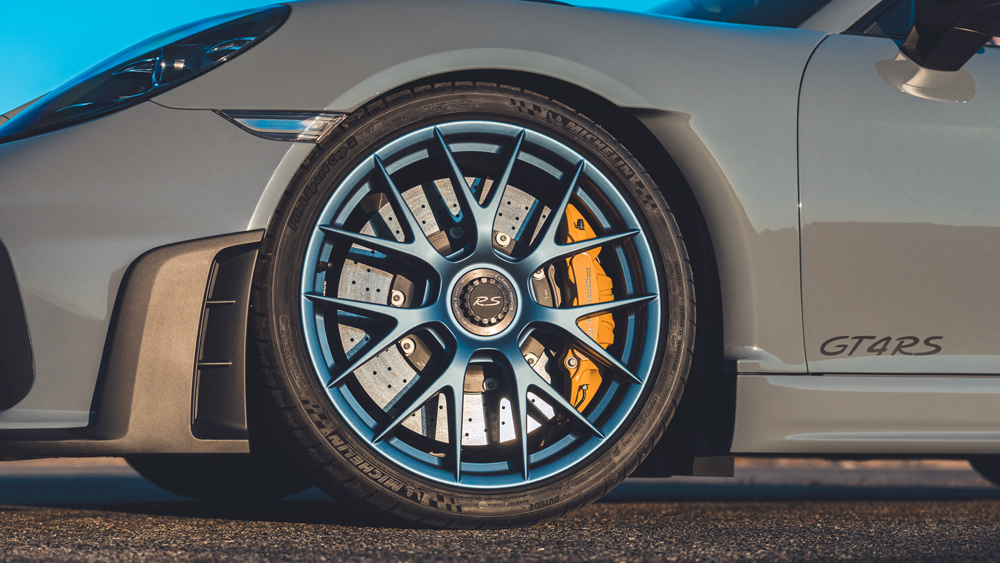 Magnesium wheels, saving about 22 pounds of unsprung weight, are an option available only with the Weissach Package. Photo: Courtesy of Porsche Cars North America.

Porsche didn’t need to build the GT4 RS; there was no void in its lineup that had to be filled. So, why does it exist? Ask the automaker, and you will be told that the go-ahead arose from the company’s own internal passion. After our seat time in the all-new 2022 Porsche GT4 RS—an impeccable execution of a mid-engine, track-focused sports car—we are betting that there won’t be a single objection among the passionate enthusiasts fortunate enough to secure a set of keys.