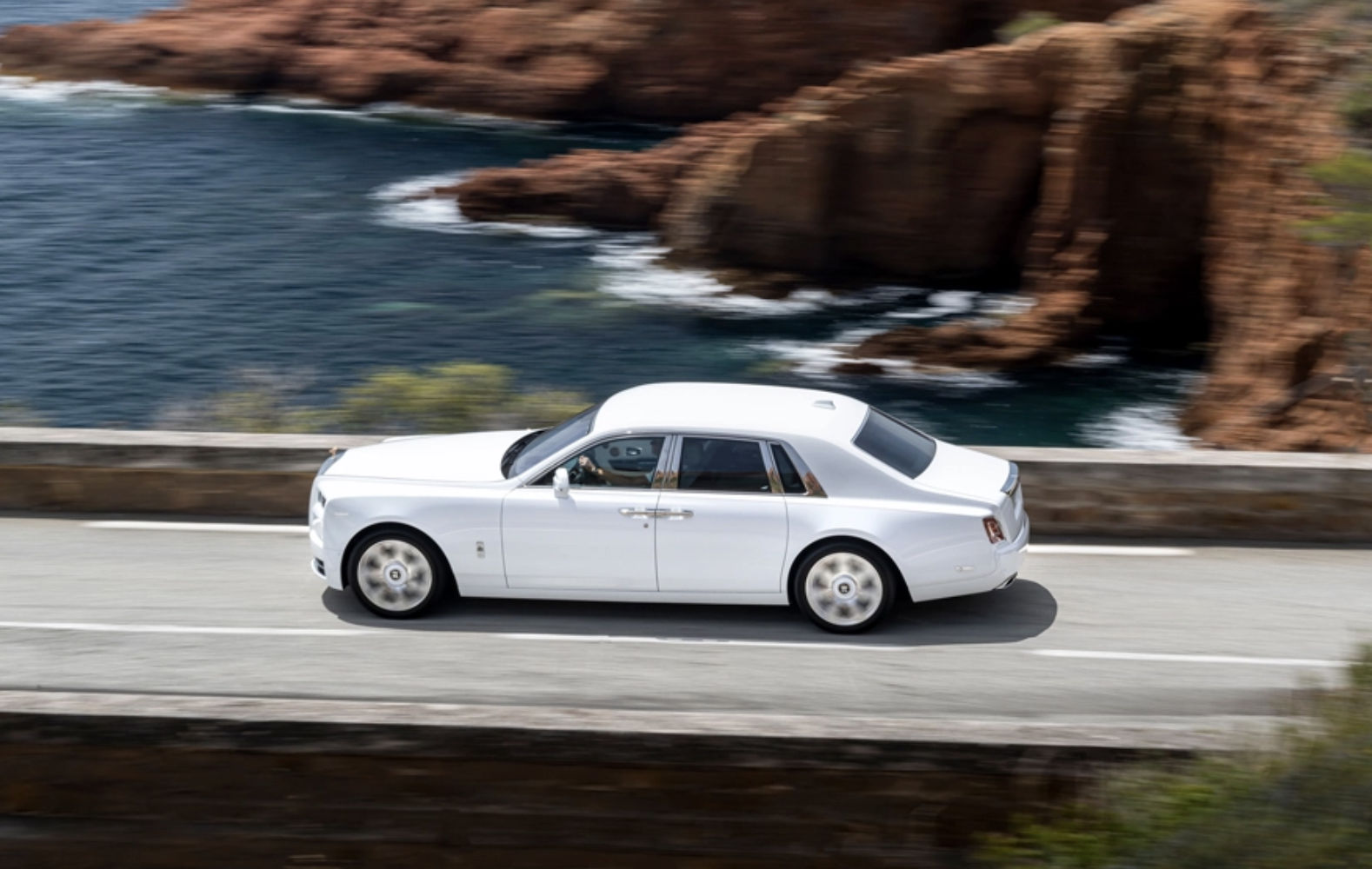 On the roads of the French Riviera, we pilot the aesthetically enhanced model and have never been so pampered.

When pressed to call out a product that represents the pinnacle of luxury, one often precedes the pronouncement with “the Rolls-Royce of.” The reference is hardly new. The British marque’s reputation was duly noted as far back as 1907, when the British publication Autocar called Rolls-Royce the “best car in the world.” Arguably, that title, bestowed 115 years ago, remains relevant, as evidenced by our experience with the automaker’s new 2023 Phantom Series II.

The flagship of Rolls-Royce Motor Cars since 1925, and now in its eighth generation, Phantom is the longest continuously running nameplate in the automotive industry—as forward looking and thoroughly modern as it is historically informed. For Rolls-Royce, there is no other way to build a Phantom. Its creators chose to launch the “Rolls-Royce of Rolls-Royces” (our words, not theirs) with a first global drive at the Maybourne Riviera, a brand-new, five-star hotel in Roquebrune-Cap-Martin, perched on a hilltop within shouting distance of Monte Carlo. The crisp, clean architecture and tranquil lawns made it the ideal venue at which to reveal 10 colourful Phantoms, each one a unique commission designed to showcase the near-unlimited capabilities for customisation. 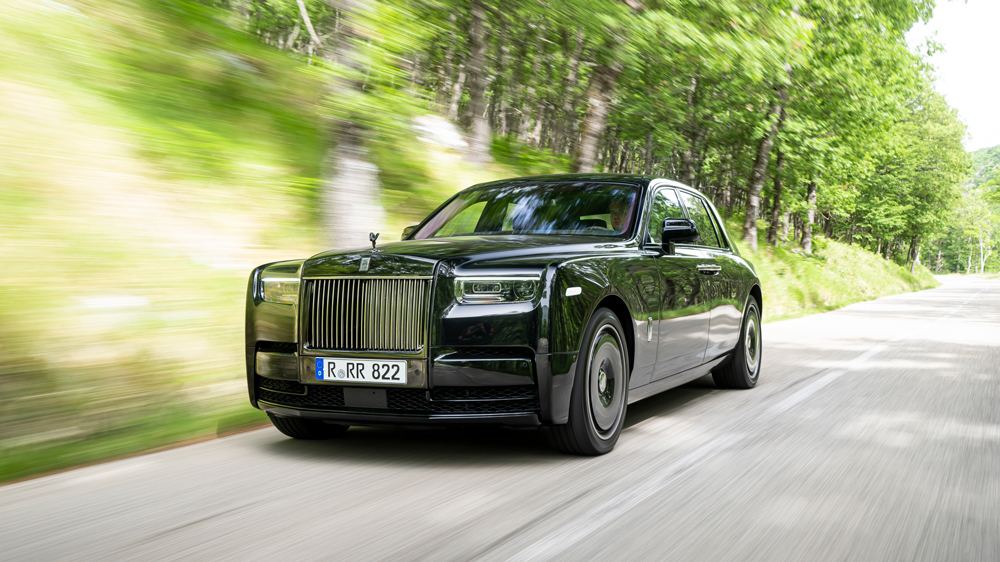 The Iconoclast, one of the 10 debut examples of the Phantom Series II. James Lipman, courtesy of Rolls-Royce Motor Cars.

e Phantom Series II, in all its singular expressions. The region of Nice was a favourite part of the world for the most notable artists of the 20th century. Here, Picasso, Matisse, Chagall and dozens of other painters, sculptors, writers and thinkers revelled in the sky, the landscape and the casual lifestyle that artfully inspired each one in a different way. Like those artists, what Rolls-Royce calls the “Poles of Luxury” are ten cars with names like Maverick and Connoisseur. Between these extremes were Platino, Patriot, Founder, Iconoclast, Prodigy, Sentimentalist, Extrovert and Aristocrat.

Sophie Weekes, Bespoke Lead on Phantom Series II, explained that, “Each of these ‘10 Exemplars’ exudes its own distinctive character. Our designers work with clients to develop a deep knowledge and understanding of our customers’ personality and then express that through their commission.” Indeed, the Phantom Series II is the ideal automotive canvas on which an owner can explore new colours and combinations of materials, fabrics and finishes to paint a masterpiece as individual as it is exquisite. 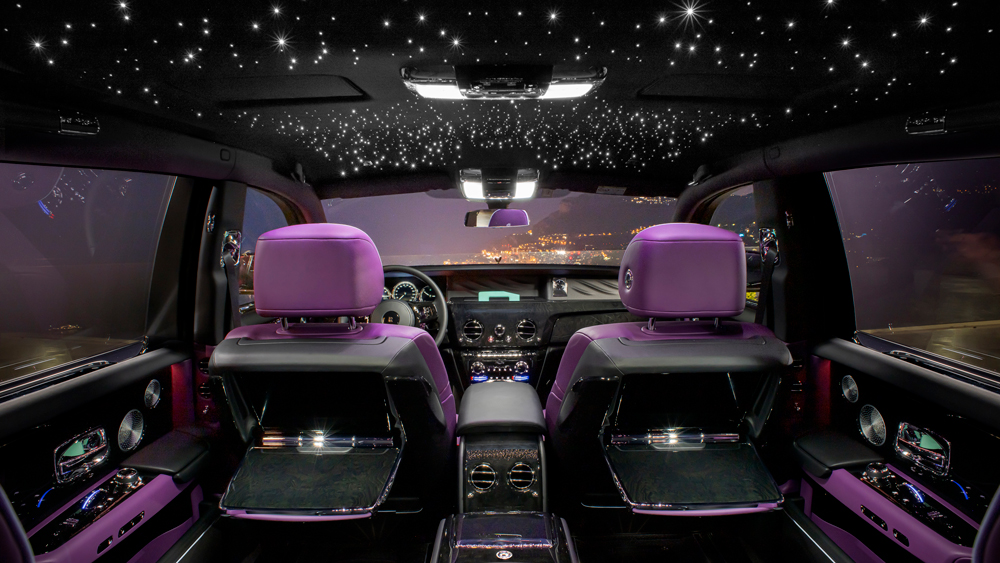 Rolls-Royce Motor Cars, under the aegis of BMW but fully autonomous, reinvented itself with the Phantom VII in 2003. It was a car that charted the company’s course for the 21st century, and was succeeded in 2017 by the Phantom VIII. But the Phantom—and Phantom owners—do not embrace radical changes, and so the Series II incorporates the most subtle aesthetic and technological enhancements that reflect the input of clients.

Astute observers would need to see the new car and its predecessor side by side to recognize the changes. In the front, a polished horizontal line connects the daytime running lights above the classic Pantheon Grille, while the “RR” badge and Spirit of Ecstasy hood ornament are more prominent as well. 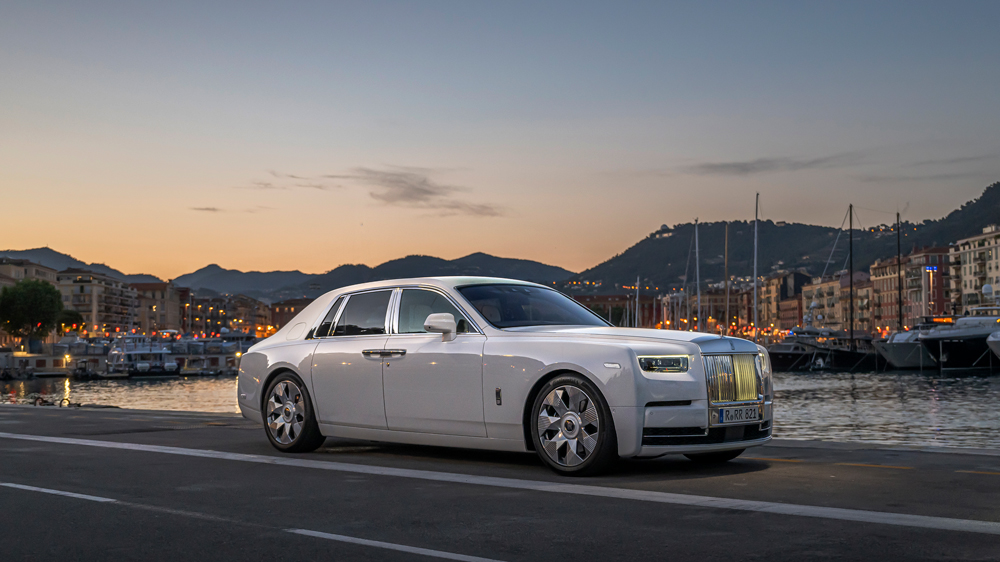 Felix Kibertus, Rolls-Royce’s head of exterior design, took a holistic approach to the lighting. “The grille itself is now illuminated, while the headlights are graced with intricate laser-cut bezel starlights, creating a visual connection with the Starlight Headliner inside. This concept which we call ‘light touch’ adds further surprise and delight to Phantom’s nighttime presence, and we see tremendous opportunities to continue to push our creative ideas.”

Day or night, the car’s profile emulates the formal proportions of every Phantom throughout history, with short front and long rear overhangs, and a long wheelbase in between. That long wheelbase can be made even longer in the Phantom Extended, the likely choice for owners wishing to be chauffeured. A high shoulder and wide C-pillars afford privacy for rear-seat occupants. Polished exterior brightwork is a feature of the Phantom design, but in response to client requests, both the grill and exterior trim are now available in darkened chrome. 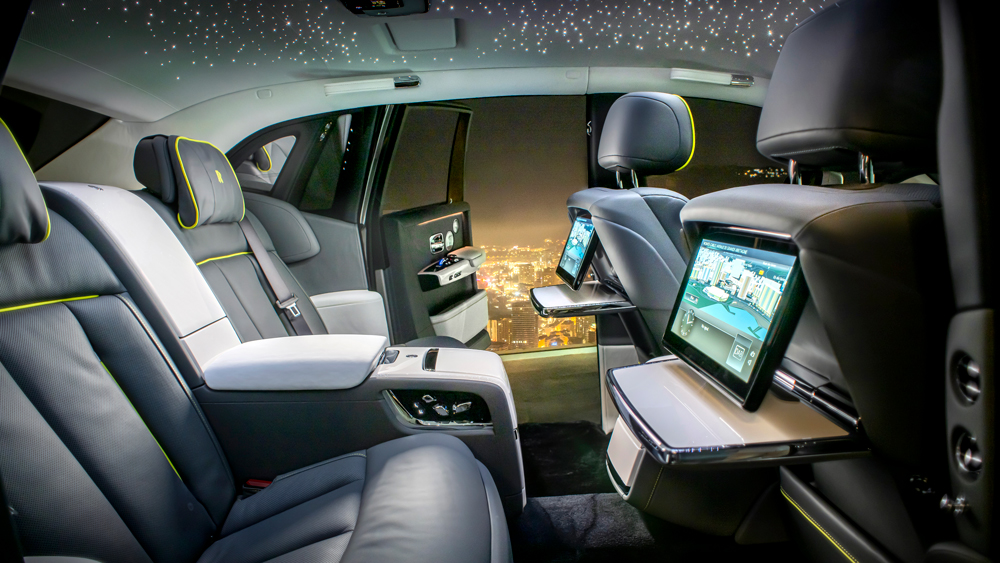 Perhaps the most apparent new exterior design cues are the wheels, whose triangular facets are 3-D milled from solid stainless and offered in a polished, paint or chrome finish. Optional stainless 22-inch disc wheels are a tip of the hat to those on the very first Phantom, and are polished or available in a black lacquer finish.

Project Manager Ralf Langmeier enumerated some of the engineering and production challenges, saying, “To produce a fully polished version takes 60.6 hours per wheel, mainly as a result of the multiple polishing finishes. On the issue of heat, we specify that the heat dispersion rating of the brake fluid is slightly higher than with other Phantom wheels. Also, we have designed the openings to optimize airflow between the 20 [hidden] spokes. This took a number of simulations to find the ultimate size, angle and position to ensure that performance remains.” 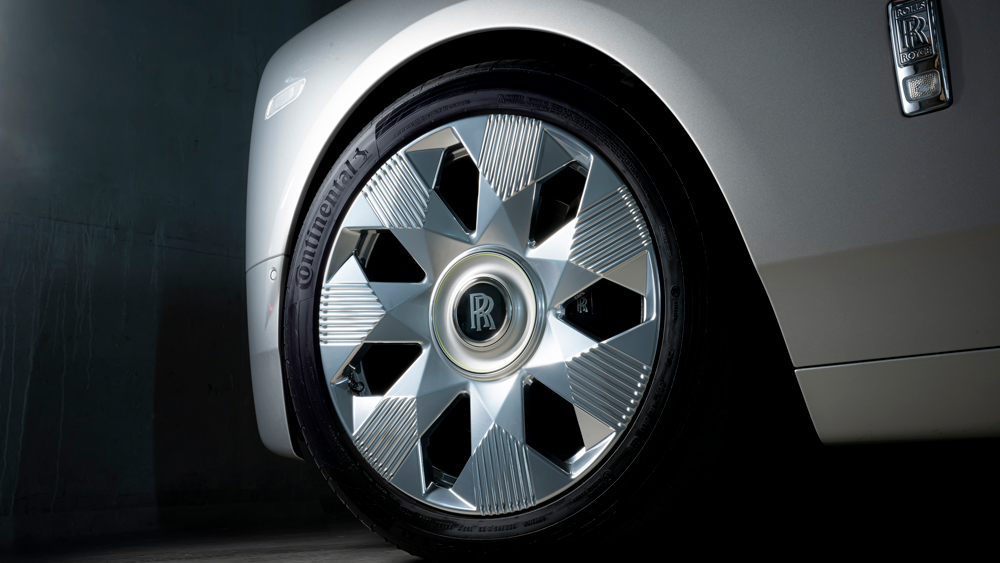 Because today’s Rolls-Royce owners are a tech-enabled crowd, the new Phantom Series II incorporates “Rolls-Royce Connected,” which communicates with Whispers, a Rolls-Royce private-members’ App. This preloads navigation instructions, displays the car’s location, security status and other information to a mobile device when the owner is away from the vehicle. And when they do enter through the wide “coach doors,” they encounter as comfortable an environment as one can imagine—at least on four wheels.

Front passengers enjoy opulent seating, separated by a wide center console, but apart from a thicker steering wheel, the cabin remains almost otherwise unchanged. In the past, clients might have assumed that a Ponderosa’s worth of leather and acres of burl would swath the interior, but today’s Rolls-Royce customers—whose average age is 45—appreciate other materials and finishes, including fabrics in wool, silk and even bamboo-based fibers. Embossing patterns and hand-painting fabrics and surfaces are also not out of the question for the artisans at the marque’s headquarters and production facility in Goodwood, England. All that is required is a creative idea, an artful solution and time. 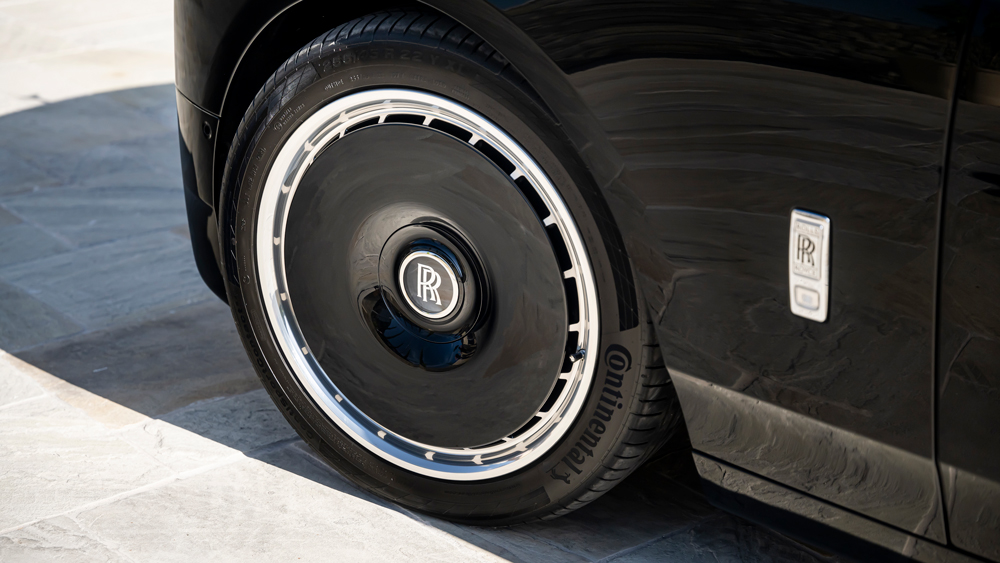 The optional 22-inch disc wheels are a tip of the hat to those on the very first Phantom. James Lipman, courtesy of Rolls-Royce Motor Cars.

The Phantom Series II’s most arresting interior feature is the Gallery, a glass-encased expanse across the dash that can contain a custom design of the client’s choosing. Recent displays have included cloisonné butterflies, porcelain roses, bas reliefs replicating a client’s DNA and paintings commissioned from favourite artists.

Driving the Phantom is the quintessential luxury-car experience. Both front and rear occupants enjoy what Rolls-Royce designers call a “magic carpet ride,” one as soft and compliant as it is silent and smooth. The famous Ogilvy headline written in 1958 remains true that, “At 100km/h an hour, the loudest noise comes from the electric clock.” Thanks to more than 100kg of sound insulation and tyres that use a layer of foam inside to lower cabin noise by as much as 9 dB, wind and road noise is greatly attenuated, while the engine and exhaust sound are distant reminders that one is underway. 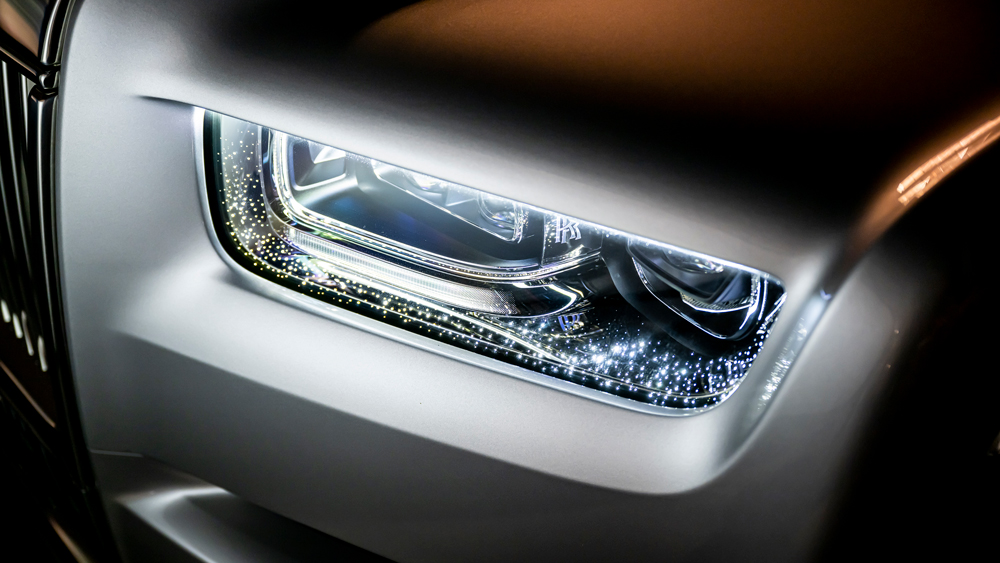 According to Rolls-Royce’s head of exterior design, “the headlights are graced with intricate laser-cut bezel starlights, creating a visual connection with the Starlight Headliner inside.” James Lipman, courtesy of Rolls-Royce Motor Cars.

That engine is the same 6.7-litre, twin-turbocharged V-12 from the previous Phantom VIII, making 420kW at 5,000 rpm and 900Nm of torque at just 1,700 rpm. In other words, as the old Rolls-Royce ads used to say, power is “Adequate.” Actually, power, and especially torque, are obscenely adequate, delivered to the rear wheels through an eight-speed automatic transmission shifted with the aid of GPS that pinpoints the car’s location, computes speed (which is limited to 250km/h) and optimises gearing based on the road ahead.

The wafting ride of the Phantom is underpinned by self-levelling air suspension, fine-tuned by a camera-aided “Flagbearer” system that scans the road to preconfigure spring and damper rates based on road conditions. Tipping the scales at a little less than 5,800 pounds, the Phantom Series II is no lightweight, but that heft is judiciously managed, thanks to Rolls-Royce’s modular aluminium space-frame chassis that is stiffer and lighter than steel. Most of the body is aluminium as well. That modular architecture will lay the foundation of every future Rolls-Royce, regardless of its motive power. It’s no secret that Spectre, the automaker’s electric coupe to be unveiled later this year, is a harbinger of things to come. With that, some speculate that the Phantom Series II may be the penultimate—or even final—V-12-powered Phantom. Whichever it is, we say, “Savor the moment.” 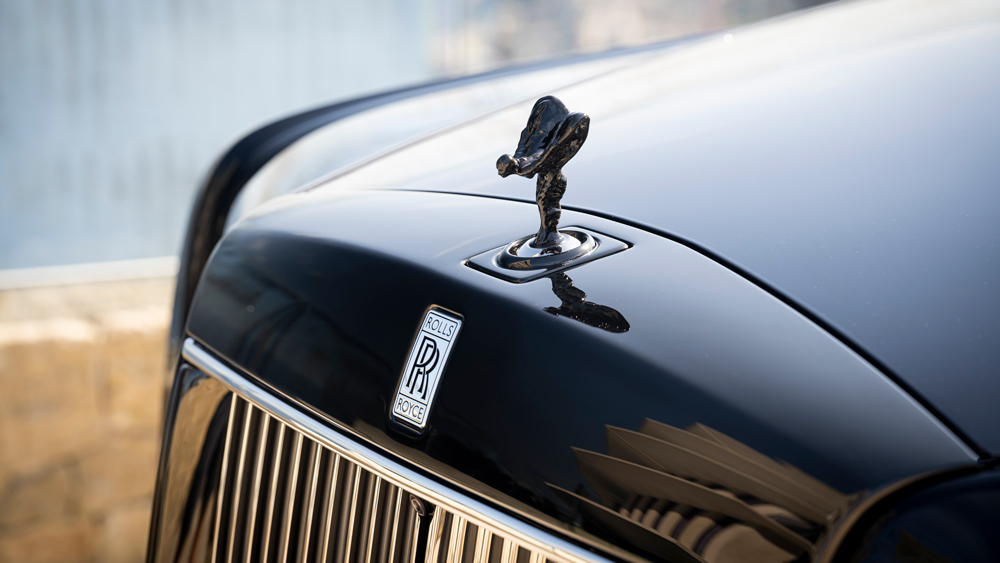 And savour, we do. Leaving our hotel, we hit the motorway and soon exit onto serpentine mountain roads toward the picturesque village of Gourdon, sharing narrow lanes with dozens of indefatigable bicyclists. The Phantom has the uncanny ability to “shrink” when pressed into athletic moves, its handling dynamics akin to a sports sedan with a little meat on its bones. Acceleration is stupendous, but so too is the braking. And the steering is quick and offers plenty of feedback.

With sure-footed precision, the Phantom negotiates tight turns at speed—some with precipitous drops on the right. Much of the deft handling is due to four-wheel steering that aids maneuverability below 60km/h and improves stability above 80km/h. In short, this is a delightful driver’s car. It’s also the perfect car in which to be driven, as I discover during a stint as rear passenger. 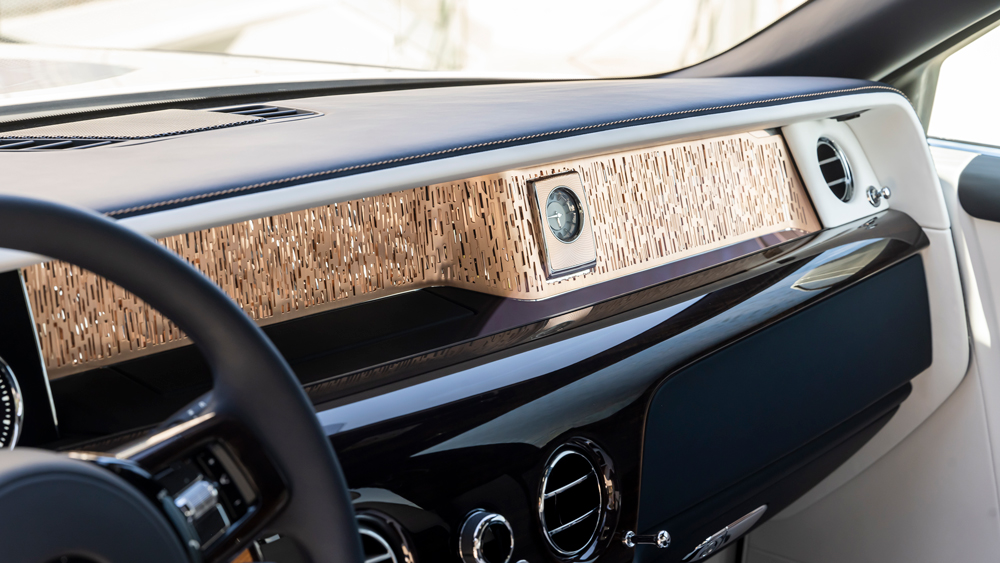 The Gallery display inside the Phantom Series II example known as the Sentimentalist. James Lipman, courtesy of Rolls-Royce Motor Cars.

Our destination is Saint-Paul de Vence, one of the most perfectly preserved medieval towns on the French Riviera. Situated on the crest of a hill, it was frequented by artists like Picasso, Miró and Matisse, whose paintings hang in the Café de la Place, a small restaurant attached to La’Colombe d’Or. Marc Chagall is buried in the cemetery up the hill. Nearby, the gardens of the Fondation Maeght are filled with sculpture, and its galleries contain one of Europe’s largest private collections of modern art, including important work by Giacometti, Miró, Braque and Chagall. Each of these artists was connected by the period and the place, yet each was unique, not unlike every personalised Phantom Series II, the base model of which starts at $475,000. It should be noted that, with exclusive options, each commission might require a year or more to build. But then, creating art takes time.