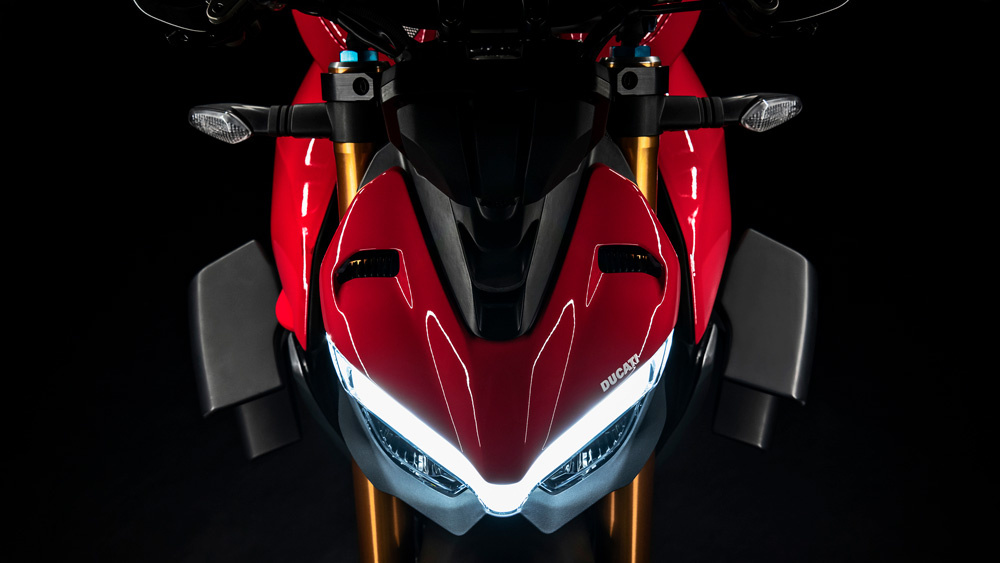 While you were likely sleeping, Ducati held a special ceremony to show off what’s new in their range for 2020. The Italian motorcycle manufacturer normally takes centre stage on Sunday, the opening night of the annual EICMA Show scheduled for the beginning of November, so the fact that they decided to go on their own is news enough, let alone what they had to offer. Here’s a quick recap of the new machines Ducati will be bringing to a dealer near you. Of course, once these machines become available, we’ll be testing them for you and reporting back.

By far the most anticipated introduction in Milan was the new Ducati Streetfighter V4 and Streetfighter V4 S. Based heavily off the Ducati Panigale V4 with the same 1103cc V4 Desmosedici Stradale motor—that pumps out a claimed 155kW—and the same chassis, both versions of the new Streetfighter do away with the bodywork and get a minimalist LED light, single-piece handlebar and winglets developed by Ducati in MotoGP, as well as the full electronics suite mitigated by the Bosch Inertial Measurement Unit (IMU).

The base model will run conventional Sachs forks and a Showa shock, while the Streetfighter S gets electronic Öhlins suspension, an electronic steering damper and forged Marchesini aluminium wheels. There is no word on Australian arrival or pricing as yet.

The Ducati Panigale V4 superbike, which blew everyone away in 2018, has received subtle tweaks for 2020, the most noticeable of which is bodywork taken from the premium V4 R superbike. These include winglets that were noticeably absent on the first edition and give the Panigale a claimed 30kg of downforce at 270km/h.

Other changes include reducing the stiffness in the front frame, raising the centre of gravity by 5mm and softening the spring rate to allow for a more compliant chassis on turn-in.

The Panigale’s $28,990 base model comes with conventionally adjusted suspension, while the Panigale V4 S gets electronic Öhlins.

A name change from Panigale 959 to Panigale V2, along with a new single-sided swingarm and bodywork that looks much more like the bigger brother Panigale V4, head the changes for Ducati’s baby superbike.

The Panigale V2 is still powered by the 955cc Superquadro V-twin motor, which punches out a claimed 115kw, but it’s now Euo-5 compliant thanks to a new exhaust and ECU mapping. There’s also new electronics in the Bosch IMU and Cornering ABS, a new up and down quickshifter. In addition, it has traction, wheelie and engine brake controls. All this in a 153kg (dry weight) package. It may be the smallest superbike in Ducati’s range, but it’s still incredibly potent.

In what may well be the swan song year for the large capacity V-twin-powered Multistrada before the V4 platform debuts in 2021, Ducati is releasing their ultimate long-distance sport tourer in the Multistrada 1260 S Grand Tour.

Mechanically, it’s very similar to the Multistrada 1260 S, with the 1262 cc Ducati Testastretta DVT engine putting out a claimed 117kw, 128Nm of torque and pushing a weight of 238 kilograms. The Grand Tour, however, gets new paint and graphics, integrated panniers, an electric fuel cap, tire pressure monitoring system, heated grips and fog lamps, all as standard equipment. Priced at US$23,295 in the states, the Ducati Multistrada 1260 S Grand Tour there is no official word on pricing and availability in Australia.