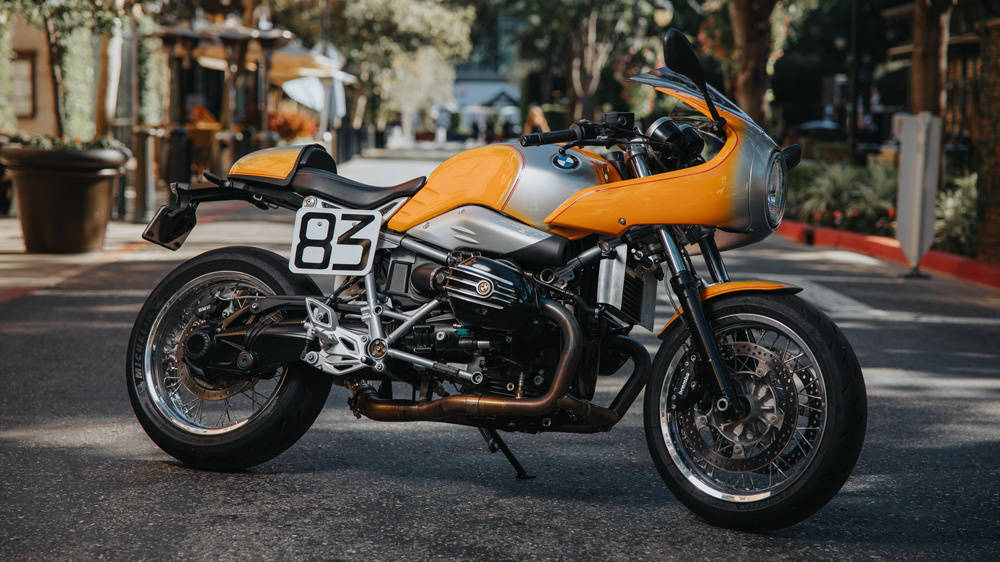 On March 5, 1976, at the legendary Daytona Speedway, motorcycle racing entered the modern era. The famous high-banked circuit was site of the first, officially sanctioned Superbike race. The term “Superbike” was coined to describe the rapid evolution of sport motorcycles (predominantly being from the Japanese powerhouses), which possessed shocking performance and eye-watering speeds. However, it was a BMW R90/S sport-touring machine, prepared by a private shop and piloted by racer Steve McLaughlin that won the prestigious 320-kilometre race that day, defying the odds-makers and establishing BMW—a company renowned for refined touring motorcycles—as a formidable racing threat.

The bike is built from a BMW R nineT racer. Photo: Courtesy of San Jose BMW.

“Rather than the usual build where the goal seems to be change as many parts as possible,” says Hodgson, “this bike is ‘change as few as possible.’” The result is a sophisticated, sharp-looking machine that aesthetically honours the past while proffering performance levels firmly planted in the present.

The San Jose shop will tailor the BMW R nineT to a client’s preferences. Photo: Courtesy of San Jose BMW.

For comfort and practicality, a custom triple clamp is fitted to allow for a taller handlebar, which provides a more relaxed riding position. Stylish spoke wheels with polished rims add a classic retro feel, while slim Euro-spec turn signals add a sleek nuance.

To capture the essence of the famous 1976 Daytona bike, the beautiful and dynamic sunburst orange and grey paint scheme is painstakingly replicated, right down to the thin red pinstripe. And for the final touch, the Tribute Bike is adorned with old school number plates sporting rider Steve McLaughlin’s signature number 83.