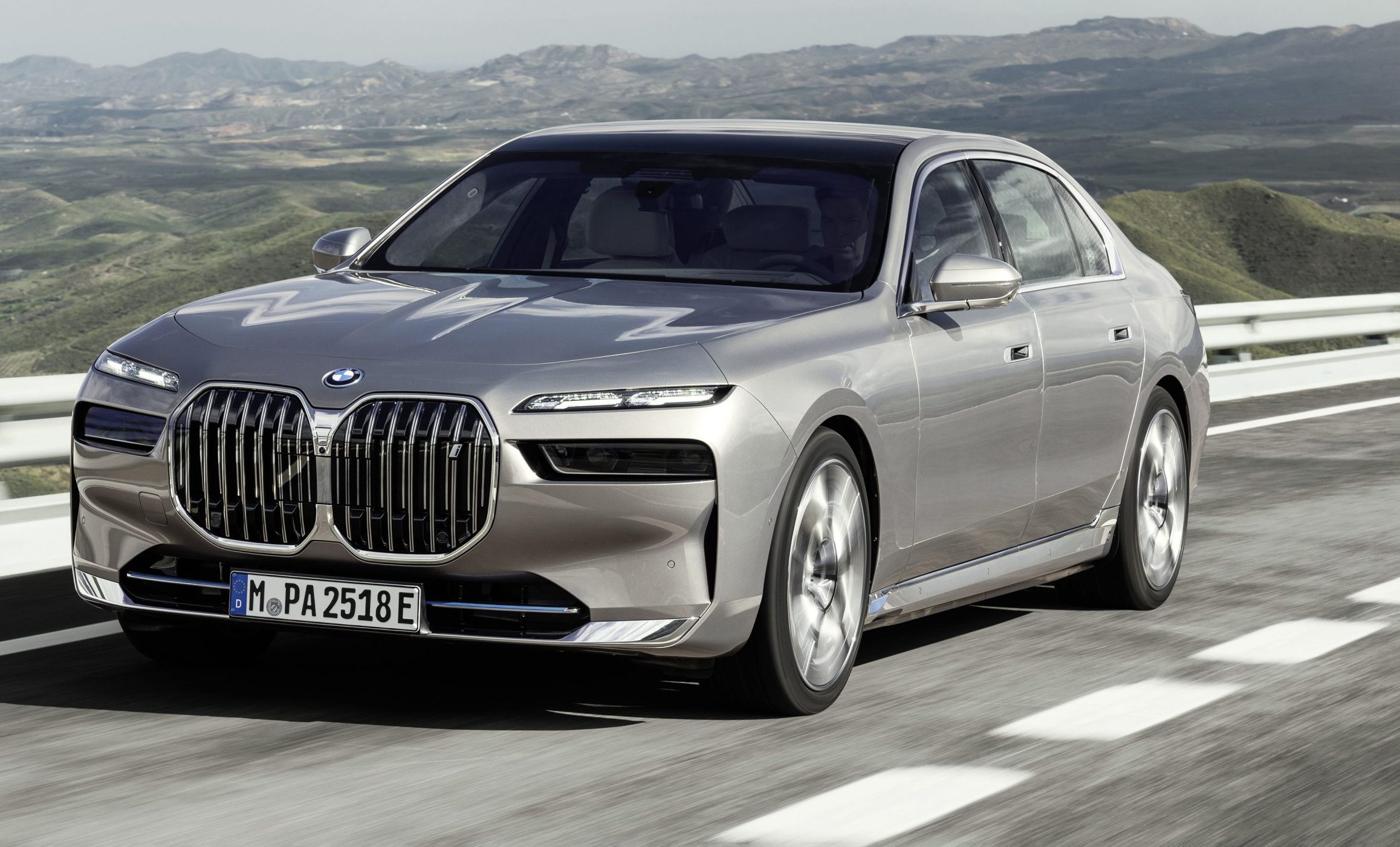 BMW Unveils The All-Electric i7 Sedan

At least two petrol-powered 7 Series sedans will also launch as part of the 2023 model year.

BMW’s 7 Series is finally ready for the electric age.

The German marque officially unveiled the much-anticipated i7 on Wednesday morning. The new EV is easily the most technologically advanced version of the automaker’s flagship yet and also sports a bold redesign that will challenge brand traditionalists.

The i7’s electric powertrain is the most likely to steal headlines. That’s where you’ll find the car’s dual-motor powertrain, which BMW has named the xDrive60. It’s similar to the drive unit found in the all-electric iX SUV but has a little more oomph. The setup’s front motor produces 190kW and 364Nm of torque, while the rear motor produces 230kW and 380Nm of torque, according to the automaker. Combined you get 400kW and 744Nm of twist. BMW says the configuration will push the i7 from zero-to-97km/h in 4.5 seconds, to electronically limited top speed of 240km/h, 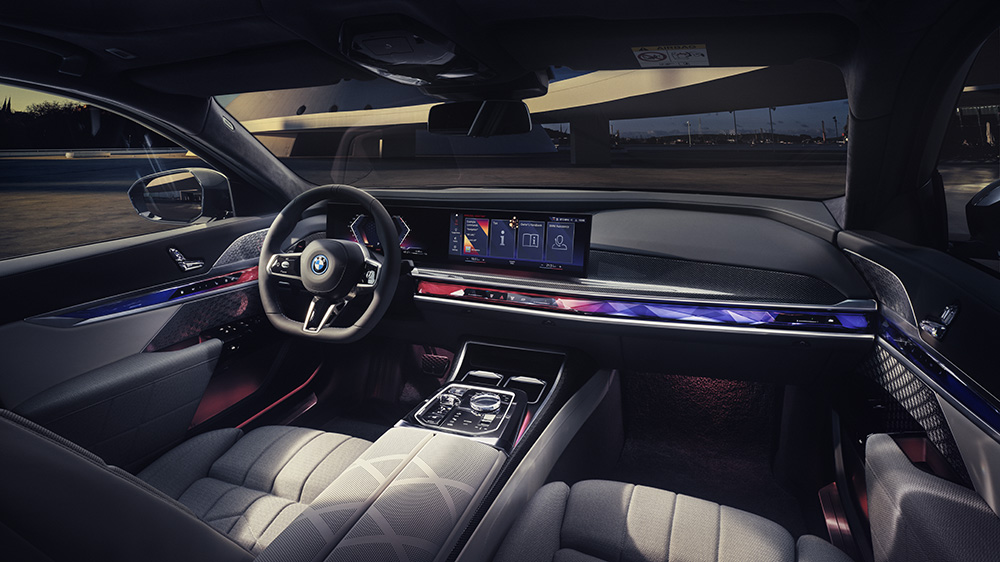 The i7’s powertrain gets its juice from a 105.7-kWh battery pack (101.7-kWh of which is usable energy) located in the vehicle’s floor. As a result, the EV will be able to drive 482km on a single charge, according to the brand. BMW says the figure is based on testing methods similar to those used by the EPA rather than Europe’s more forgiving WLTP standard, so the final number should be pretty close to the brand’s estimate.  That range is not spectacular—the Mercedes-Benz EQS, one of the i7’s direct competitors, can travel 547km between charges—but it should be more than enough to get around on a day-to-day basis.

Topping up the battery should be quick. The sedan can accept up to 195-kW of DC charging, so you can add 128km of range in just 10 minutes and go from 10 per cent to 80 per cent capacity in 34 minutes. 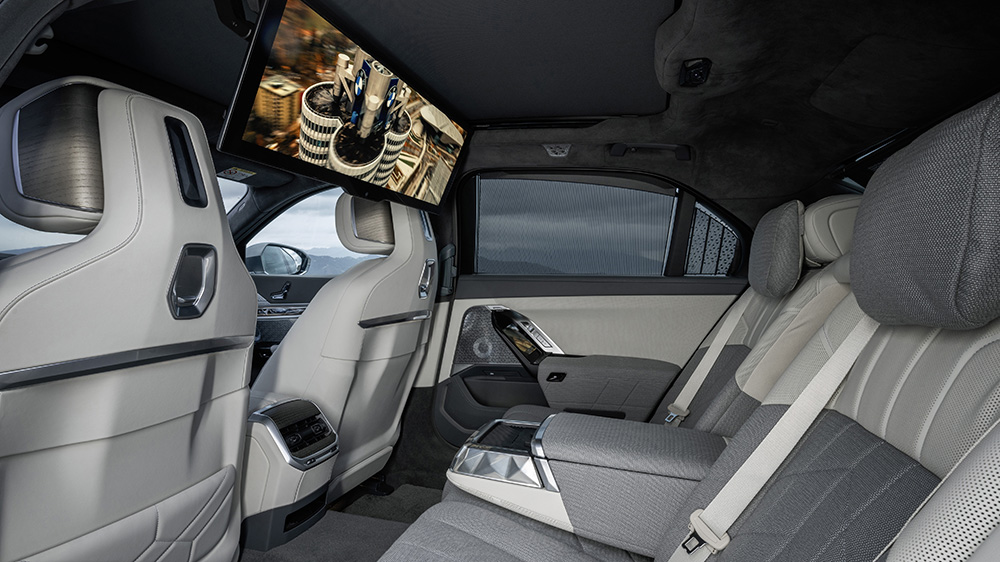 The i7’s rear seat with the theatre screen down BMW

The i7’s design is as likely to spur discussion as its powertrain. People are going to love or hate the new front fascia, but it’s hard to imagine anyone being indifferent. That’s because the nose of the car is outfitted with the gigantic kidney grille that has been driving some enthusiasts nuts for a couple of years now, as well two new additions: split headlamps and an illuminated badge. The rest of the car is more restrained. BMW has opted against the subtle curviness of the previous 7 Series in favour of enhanced aerodynamics. From the A-pillar to the rear, the i7 looks like a more commanding i4, which is a good thing. We imagine there are some who will have trouble getting past the macho front end, but this is not a car for traditionalists.

The interior design of the i7 appears to be equally bold. Up front there’s a screen that extends from the driver’s cockpit to the middle of the dash. It includes a 12.3-inch digital gauge cluster and a 14.9-inch multimedia touchscreen, powered by BMW’s iDrive 8 infotainment system, which can also be found in the i4 and iX. You can use this screen to trigger the optional Highway Assistant, which allows hands-free driving up to 130km/h on the freeway.

The biggest changes are in the back. There’s a new Executive Lounge package upgrade that adds comfortable power-adjustable seats, a footrest for the right rear seat and a giant 31.3-inch theatre screen that drops down from the roof to display movies in 8K resolution. Other interior amenities include ambient lighting, deluxe materials like open-pore wood for the dash and cashmere for the seats and automatic doors. The car is also equipped with an adaptive air suspension to soften any bumps in the road. 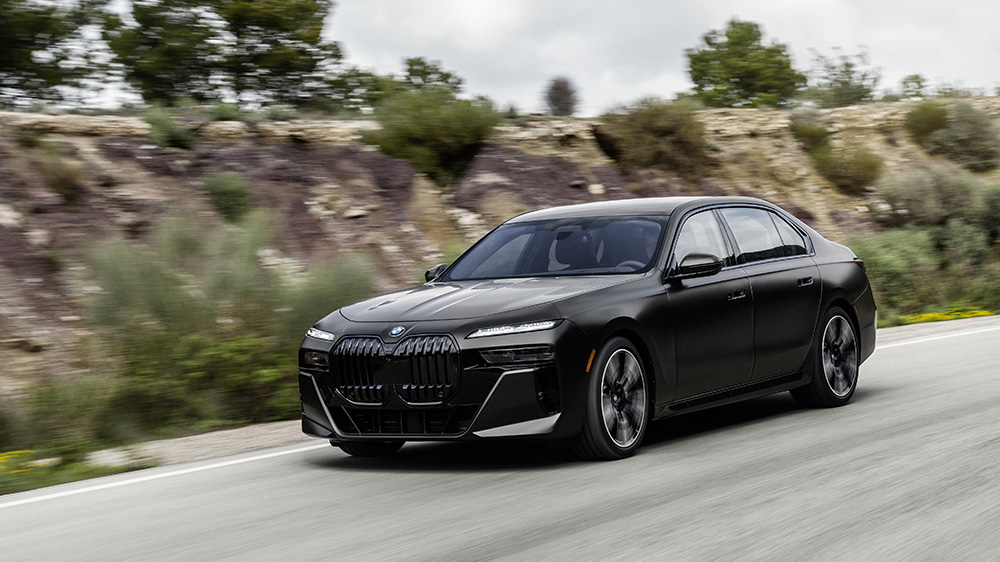 The i7 will launch as part of the 2023 model year along with at least two gas-powered new 7 Series sedans. The other models are the rear-wheel-drive 740i, which has a 3.0-litre turbocharged inline-six that produces 280kW and 520Nm of torque, and the all-wheel-drive 760i xDrive, which is powered by a 4.4-liter twin-turbo V-8 churning out 400kW and 722Nm of torque. Both gas-powered engines are mated to an eight-speed automatic transmission and are aided by a 48-volt mild-hybrid system. A plug-in hybrid variant called the 750e and an M-badged 7 Series are also on the way, according to Car and Driver. Whether you opt for an all-electric or internal combustion engine, the car looks the same inside and out.

BMW plans to begin delivering the i7 in the final quarter of the year with prices to be announced closer to arrival.

Check out more photos of the i7 below: 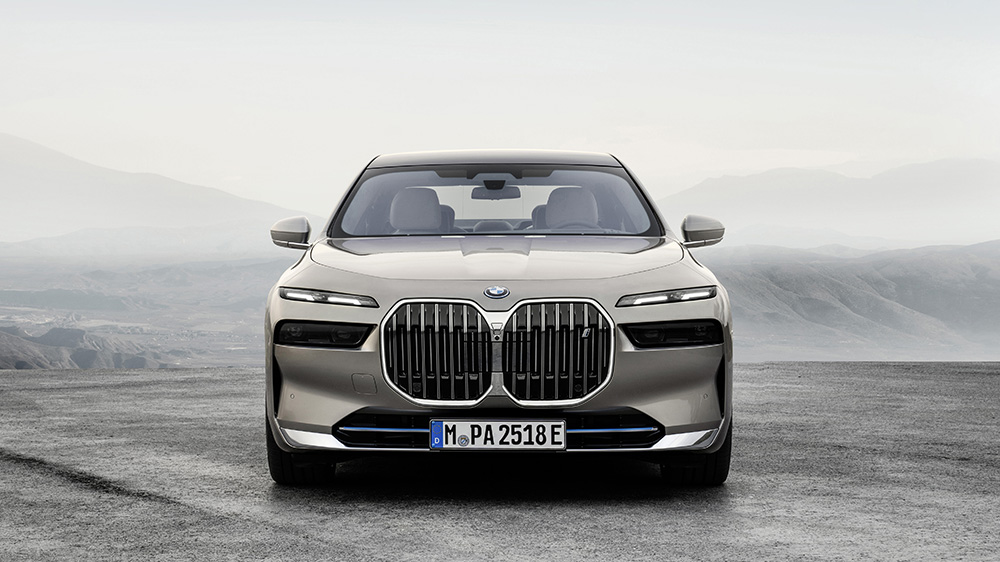 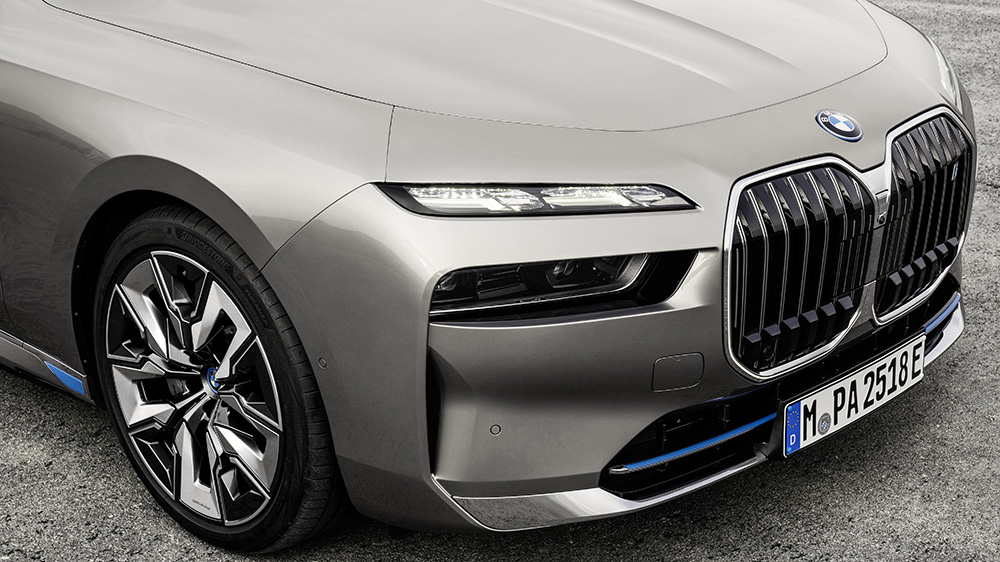 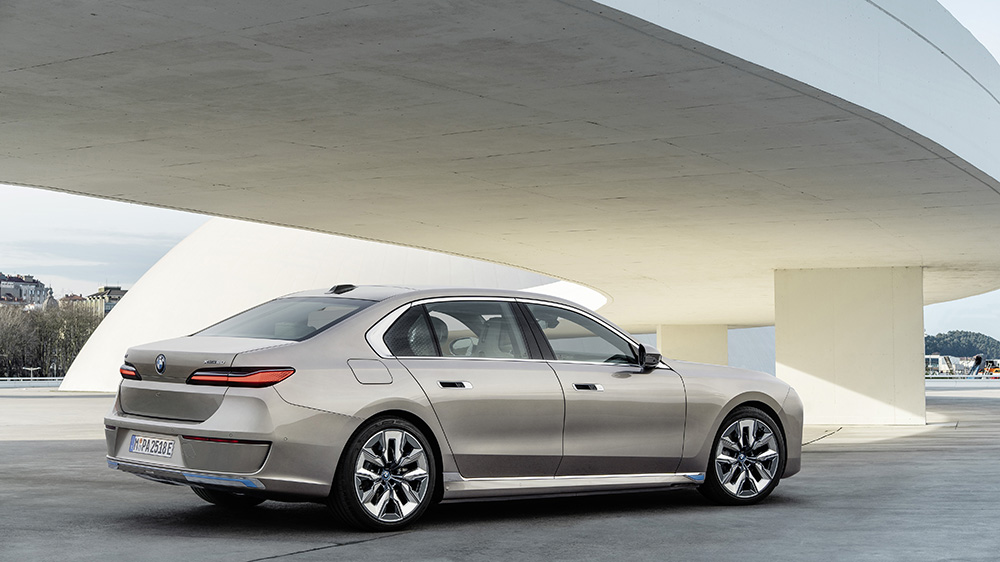 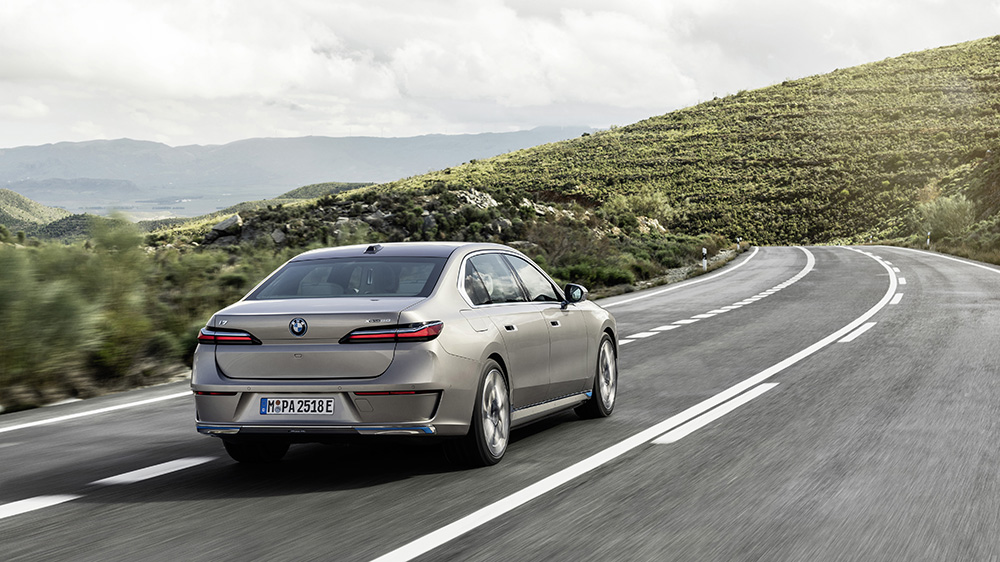