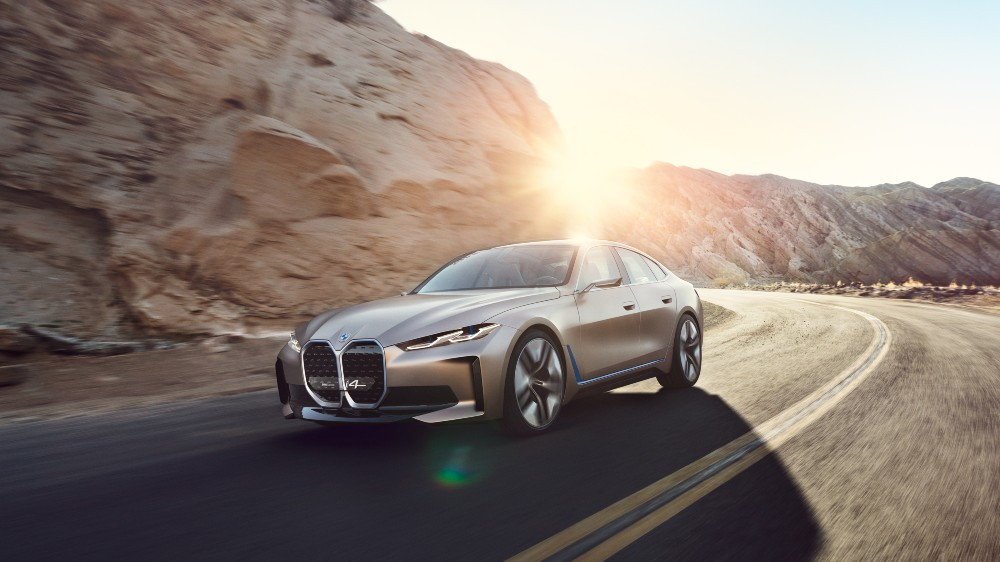 The sedan will provide some competition for the Tesla Model S when it arrives next year.

And then there were three?

Tesla may reign supreme in the electric vehicle market, but the arrival of Porsche’s deservedly hyped Taycan gave the Model S its first taste of competition last year. And now BMW is ready to get in on the action and challenge both marques with its new, all-electric Concept i4 sedan.

One of a slew of exciting new vehicles unveiled via livestreams and press releases in the wake of the Geneva International Motor Show’s cancellation, the Concept i4 is a peek at the German automaker’s electric future. But unlike so many other concepts, the forward-thinking four-door will actually make its way to the road in the very near future.

Given that this concept is BMW’s first major go at a fully electric vehicle, the bulk of the attention is sure to be focused on the powertrain. And the early signs, at least based on what BMW has told us, are promising. The i4 will be powered by a 395kW motor placed in the rear axle. Getting its juice from an 80kWh battery pack, the powertrain will allow the car to go from 0-to-100km/h in just four seconds and reach a top speed of 200km/h.

Of course, this is an EV, so range may be even more important than speed. BMW claims the i4 will be able to drive 434-kilometres on a single charge, which is close to the 445-kilometre range of the standard Tesla Model S and much better than the 323-kilometres offered by the Taycan. The sedan’s onboard charger also promises 150-kW fast-charging capability, meaning you’ll be able to charge the battery to 80 per cent in 35 minutes.

Beyond its specs, the Concept i4 is also pretty easy on the eyes. While the production version will look slightly different than what the automaker unveiled on Tuesday, we now have a pretty good idea of what to expect. The sedan definitely looks like a BMW, but with an elongated hood, softer edges and sleeker lines that give it something of a sportier shape. The boldest changes may be the huge front kidney grille, which is offset with electric blue accents, sharp LED headlights and a newly reworked Roundel logo that forgoes the black of the current design.

Inside the car is a spacious, driver-focused cockpit that might be the most cutting-edge aspect of the vehicle. The instrument panel has been replaced with a large touchscreen monitor that curves towards the driver and doubles as its infotainment system. Elsewhere in the wide-open interior, you’ll find a yoke-like steering wheel, bronze accents, sustainable materials and fabrics covering everything from the seats to the door panels and lighting elements that can be programmed to meet the driver’s and passengers’ personal needs.

Inside the BMW Concept i4 electric sedan BMW

Of course, the most exciting aspect of the i4 Concept is that it will actually be a real car. The production version is at the forefront of BMW’s promise to offer 25 hybrid and electric models to consumers by 2023. Expect a slightly more restrained version of the i4 to go on sale sometime next year. Let the competition begin.

Check out more images of the Concept i4 below: