Want to stretch your legs? Bentley’s Bentayga Extended Wheelbase has you covered. Billed as the British marque’s “new luxury flagship,” this lengthened and more lavish SUV effectively replaces the Bentley Mulsanne four-door sedan. Robb Report was recently treated to a secret preview of the EWB.

Our rendezvous with the new Bentayga variant took place in a closely guarded studio at Brooklands, near London. Built in 1907, Brooklands was the world’s first purpose-built racetrack and became synonymous with Bentley. In 1935, the 8.0-litre BH1, owned by famous ‘”Bentley Boy” Woolf Barnato, lapped the steep banking at an average of 229.5km/h Decades later, two of Bentley’s road cars were named after the circuit. 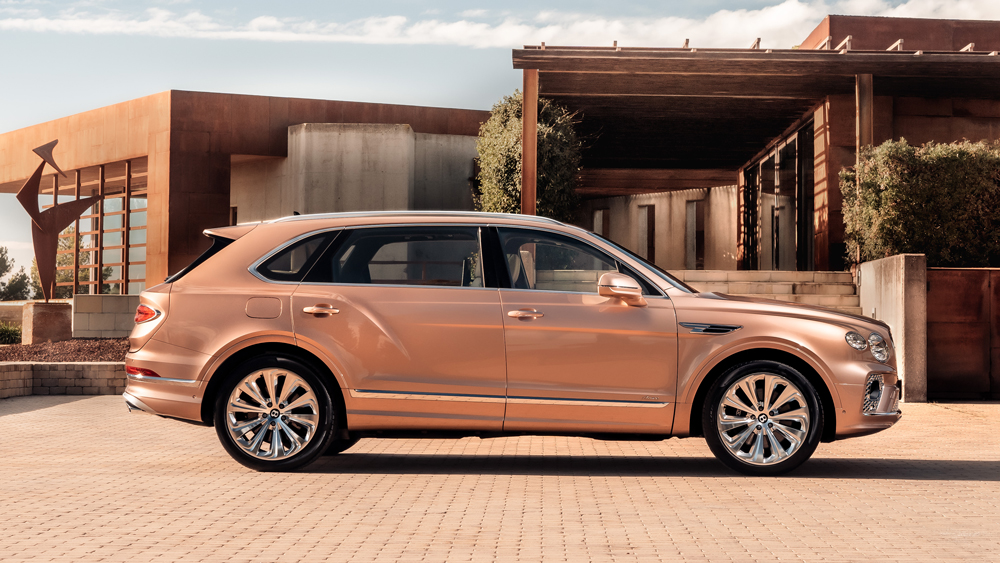 Bentley had two examples of the new Bentayga for us to see and sit inside. The EWB part of its name refers to a wheelbase stretched by 7.1 inches (18cm), creating a longer cabin than a Rolls-Royce Cullinan, or a Mulsanne for that matter. According to Chris Cole, product line director for the Bentayga, it offers “a true chauffeur-driven experience.”

The Bentayga’s styling has always split opinion, but the Extended Wheelbase wears its extra inches well. Indeed, you’ll struggle to tell stock and EWB versions apart at first glance. All the extra length is incorporated into the rear door, which emphasizes the kicked-up muscular haunches. And an exclusive 22-inch wheel is standard, with 21s available if you plan any off-road excursions. 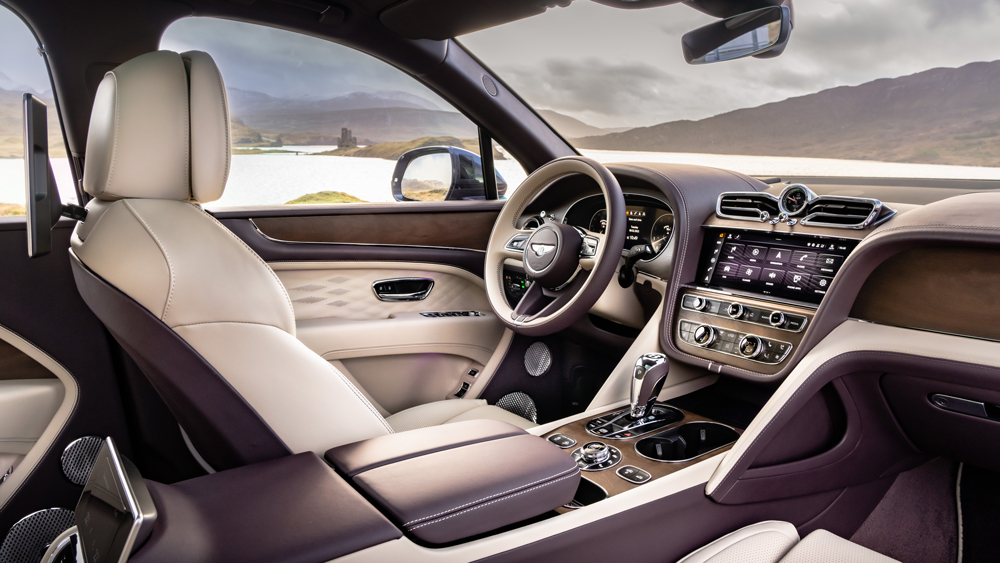 The two Bentaygas at Brooklands had very different specifications: one in Rose Gold with glinting chrome trim, the other in stealthy Grey Violet with the Blackline package. Either way, the key EWB styling differences are a vertical-vane front grille and repositioned panoramic sunroof—moved 4.9 inches rearwards to benefit those luxuriating in the back.

Beneath the hood, the EWB packs in Bentley’s 410kW 4.0-litre V-8 that’s mated with an eight-speed automatic transmission. With a curb weight of 2513kg (around 100kg more than the regular V-8-powered version of the model), it bludgeons zero to 97km/h in 4.5 seconds and has a top speed of 289km/h. Cole told us there won’t be a 473kW W-12 alternative, stating, “that engine is reserved for the Bentayga Speed; this car is more focused on luxury.” Yet the 335kW, V-6 plug-in hybrid drivetrain is “currently being considered,” according to Cole. 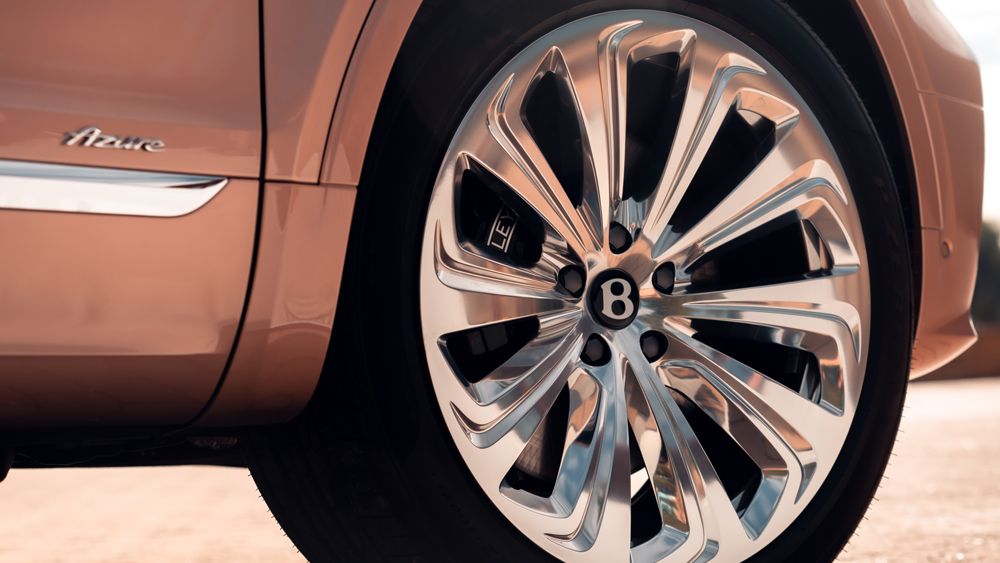 To help manage its extra length, the EWB is the first Bentayga to be given electronic all-wheel steering. Along with improving high-speed stability, the system shrinks the car’s turning circle to a nimble 11.8-metres, which represents a seven per cent decrease from that of the standard model. Bentley Dynamic Ride is also fitted to every EWB, with 48 v active anti-roll bars to maintain ride comfort and enhance cornering control.

But enough about the hardware, the flagship Bentayga is all about the soft furnishings. Bentley talks of a focus on wellness and claims to have developed the “most advanced seat ever fitted to a car.” The optional rear Airline Seats move in 22 different ways and have a postural adjustment system that can apply 177 individual pressure changes over a three-hour period to minimise fatigue. Sensors also detect your body temperature and humidity, then direct the seat heating or ventilation accordingly. 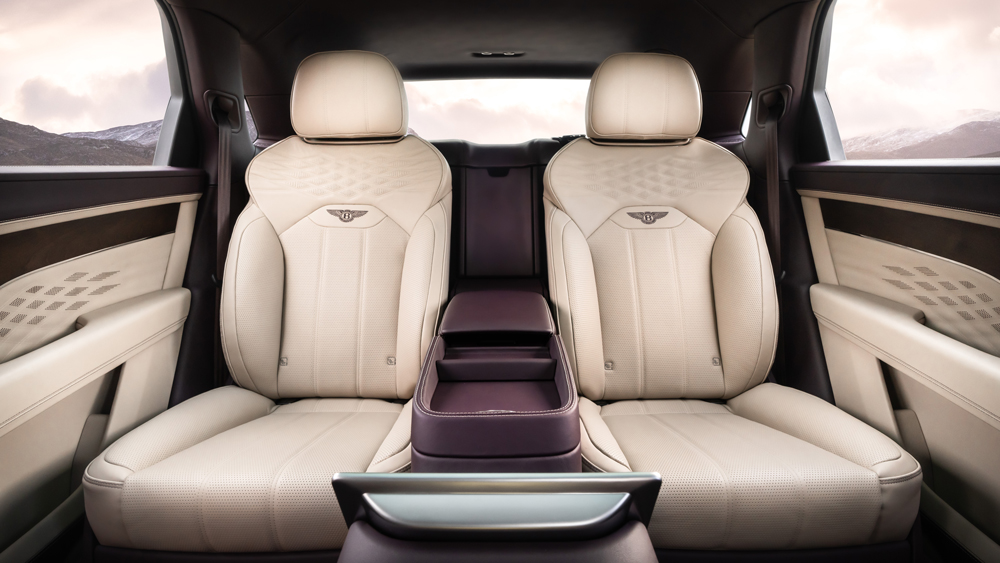 After only a few minutes experiencing the Airline Seat, we found its cosseting shape and barely detectable massage felt sumptuous and pampering beyond even the Bentley norm. Select Relax mode, using the touchscreen remote control, and the chair reclines to 40 degrees, while a leather-trimmed footrest deploys from behind the front passenger seat. Even tall adults will be able to stretch out. Got work to do? Switch to Business mode and the seat returns to upright. 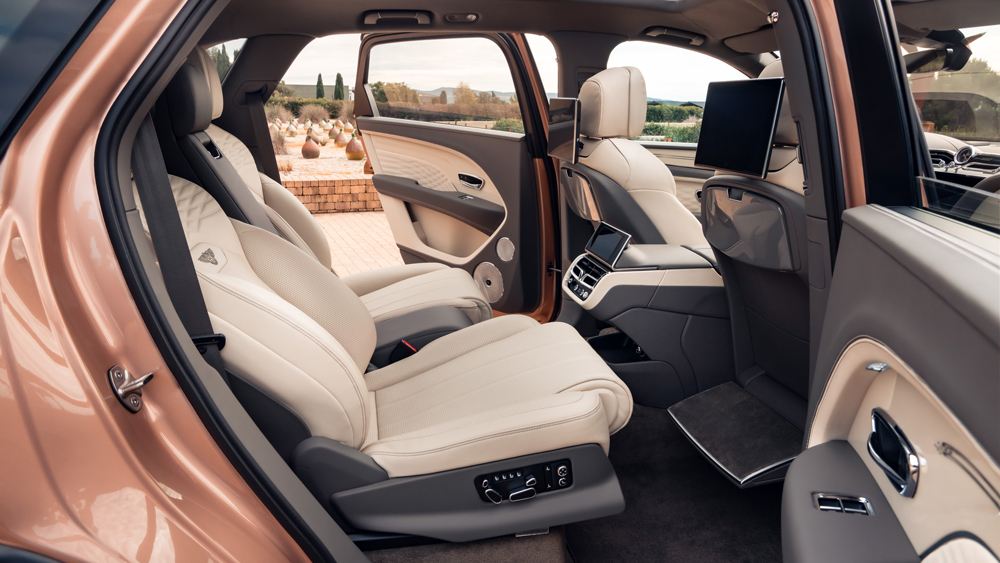 In Relax mode, rear seats recline to 40 degrees, while a leather-trimmed footrest deploys from behind the front passenger seat. Bentley Motors Limited

Further niceties include backlit leather door panels, dual rear air ionizers, heated armrests and optional power-closing doors. You can specify the Extended Wheelbase with four or five seats, plus a new “4+1” specification with an occasional centre perch. There are also a staggering 24 billion trim combinations, which should keep you busy on the configurator.

Bentley hasn’t announced prices yet, but the company predicts the EWB will comprise 45 per cent of Bentayga sales. And after seeing it up close, we certainly think it could be a candidate for ultimate production SUV.