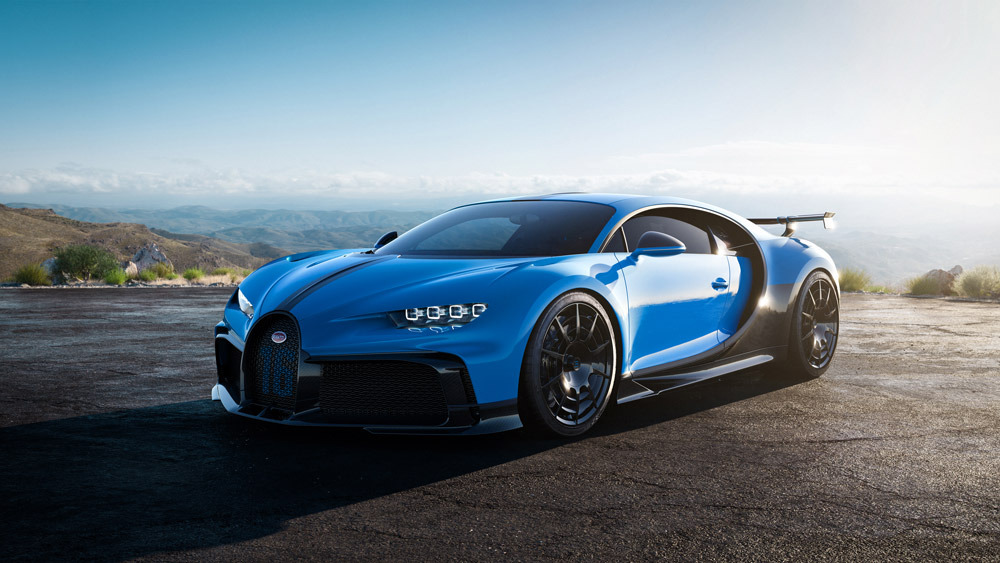 Limited to 60 examples, the handling-focused variant is priced about $1.5 million higher than the original model.

Did anyone out there really have any issues with the Bugatti Chiron when originally released—a museum-worthy hypercar costing $3.9 million and capable of hitting 418km/h? Didn’t think so.

And yet the good folks in Molsheim, France, crafting these Faberge-eggs-of-the-auto-world were sure there was room for improvement. Behold the Bugatti Chiron Pur Sport, which very deliberately shifts the model from being merely a tool to hit aeroplane-type speeds and towards Bugatti’s 111-year-old roots as a purveyor of championship machines that tackle the curves with aplomb.

Priced at roughly $4.9 million (before on-roads), the Chiron Pur Sport will be part of Bugatti’s rarified model line in 2020, one that also includes the Bugatti Divo, which launched at Pebble Beach in 2018. The Divo is priced at nearly $9 million, will be limited to 40 units, and is billed by the company as “the most agile and dynamic car” it has ever produced. The Pur Sport almost seems like a bargain by comparison, considering its equally limited run of 60 examples and the fact that it features the same laser focus on vehicle responsiveness.

Bugatti president Stephan Winkelmann reports that the company spoke with customers and determined that its elite clientele was in search of “a vehicle that is geared even more towards agility and dynamic cornering.” Put another way, while the world’s most astute car collectors may not have the time (nor the crazy gene) to test a Chiron’s top speed or zero-to 100km/h prowess, they often do have plenty of favoured backroads to flog between deals, and there’s no reason Ferrari and Porsche owners need to have all the fun.

The interior is dressed in Alcantara, black anodized aluminium and titanium. Photo: Courtesy of Bugatti.

The short version of the Pur Sport’s make-over boils down to a weight-loss program (the car dropped 50-kilograms) coupled with slimmer bodywork. But the Pur Sport wears a larger diffuser and huge fixed rear spoiler. The lighter weight and increased downforce—not to mention custom-crafted Bugatti Sport Cup 2 R tyres made by Michelin—add up to serious grip.

But the refinements don’t stop there. New magnesium wheels not only reduce weight at each corner, but their design both increases rotor ventilation and reduces turbulence, factors that Bugatti engineers say combine to give this version of the Chiron even more accurate, direct and stable steering.

The chassis also underwent some handling-focused modifications, starting with springs that are 65 per cent firmer upfront and 33 per cent firmer in the rear. Carbon-fibre stabilisers at the front of the car also help minimise body roll when carving through the canyons.

Finally, the Pur Sport’s transmission has been geared towards keeping revs high, with an overall ratio that finds gears 15 per cent closer together, the company reports. That translates to the car allowing you to brake later and then rocketing you out of the corners sooner than the standard Chiron.

The Pur Sport is 50-kilograms lighter than the standard Chiron and generates more downforce. Photo: Courtesy of Bugatti.

As to how you can tell them apart, Bugatti has offered a few tasteful changes to the car’s front end that will telegraph the difference to the cognoscenti. Most noticeably, this includes particularly wide front-end air inlets flanking the marque’s signature horseshoe-shaped radiator. The revised front-splitter setup not only helps keep the nose glued to the pavement, but it also makes the car appear slightly wider and more aggressive, befitting its name. Customers who choose the optional split-paintwork design, which casts the entire lower third of the car in exposed, dark carbon fibre, will give their steeds any even more menacing look.

Inside, the vibe is all business. Large surfaces are upholstered in Alcantara rather than leather, for weight reduction, while all trim and controls are made from either black anodized aluminium or titanium. And contrast stitching adds a minimum of colour highlights. All told, it’s a race-worthy package familiar to the Ferrari 488 Pista or Porsche GT3RS crowd—if you add a few zeros to the price tag.

Given what Bugatti has done with the Chiron Pur Sport, it’s clear that there were some improvements left to be made to the Chiron after all. Who would have thought?