The German automaker’s EV sports sedan is here to take on the Porsche Taycan.

More than two years after first making its debut as a breathtaking concept car, the Audi E-Tron GT has finally arrived. On Tuesday afternoon, the German luxury automaker unveiled the production version of its much-anticipated electric sports car in a star-studded virtual event. So, was it worth the wait? Based on our initial impressions of the battery-powered sedan, the answer is yes—and then some.

Late last year, the marque’s head of design, Marc Lichte, said the production version of the E-Tron GT would look “99 per cent” like the concept car that first turned heads at the Los Angeles Auto Show in November 2018 (and again in 2019’s Avengers: Endgame). And sure enough, the EV revealed on Tuesday looks almost identical to that prototype. While some may bemoan the lack of surprise, in this case, we think it’s is a very good thing.

Loyalists of the marque will certainly agree that the E-Tron GT looks very much like an Audi, but it also has a sporty flair all its own. Although the EV is the same length as the A7, it’s lower and wider, and the proportions are only accentuated by the car’s 20-inch, five-spoke alloy wheels. Every design element—from the inverted Singleframe grille and sloping roofline to the radiator and brake-duct air inlets that close when not in use—is made to optimize the vehicle’s aerodynamics and efficiency. 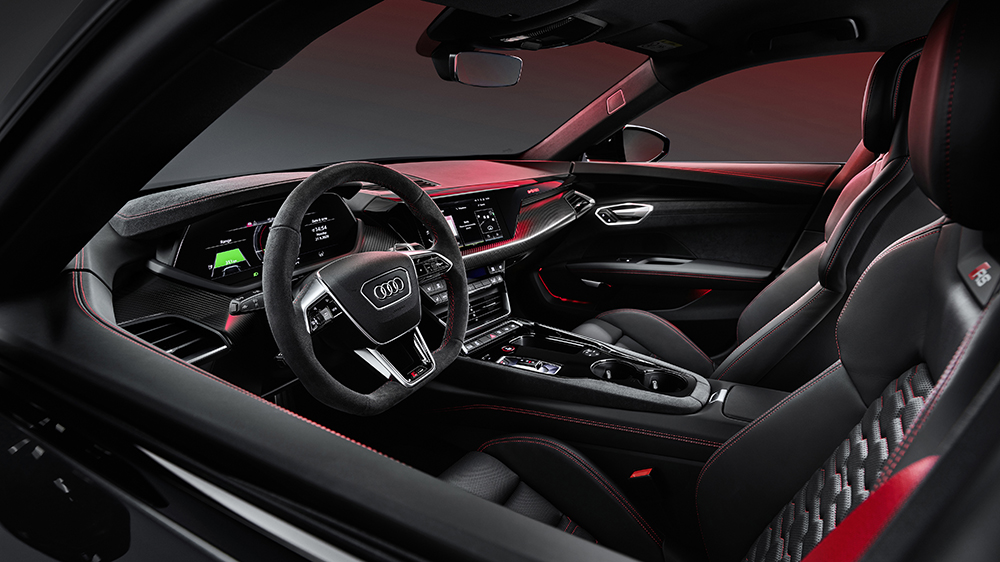 Inside the E-Tron GT Audi

The athletic aesthetic carries over to the interior of the EV. The first thing you’ll notice is a “monoposto” enclosure that angles the 12.3-inch Audi virtual cockpit and 10.1-inch MMI touchscreen display towards the driver, allowing you to monitor every aspect of the ride. The interior, including the full-circumference, flat-bottom steering wheel, is covered in leather-free materials like Dinamica and Alcantara as standard, though Nappa leather is available as a premium option.

The tech is no slouch, either. Developed alongside Porsche’s Taycan (the automakers are sister companies), the E-Tron GT is built on the same 800-volt electrical architecture and features two separate electric motors, one on each axle, that provide all-wheel drive. Mated to a two-speed transmission, this setup is capable of delivering 350kW and 630Nm of torque (figures that get a bump to 390kW and 640Nm, respectively, when the car’s Overboost feature is engaged). All that power translates into an EV that’s able to zoom from zero to 97km/h in just 3.9 seconds and top out at 345km/h. It may not be as powerful as the top-of-the-line Taycan, the 560kW Turbo S, but it can hold its own.

The RS variant will pack even more oomph. A more powerful rear-axle motor adds an additional 90kW, pushing output to 440kW and 830Nm of torque. With Overboost, the dual-motor setup produces 475kW and the same amount of torque. It can accelerate from zero to 97km/h in 3.1 seconds and reach a top speed of 250km/h. The RS’s more powerful rear motor is heavier, though, pushing the EVs weight from 2295kg to 2330kg. 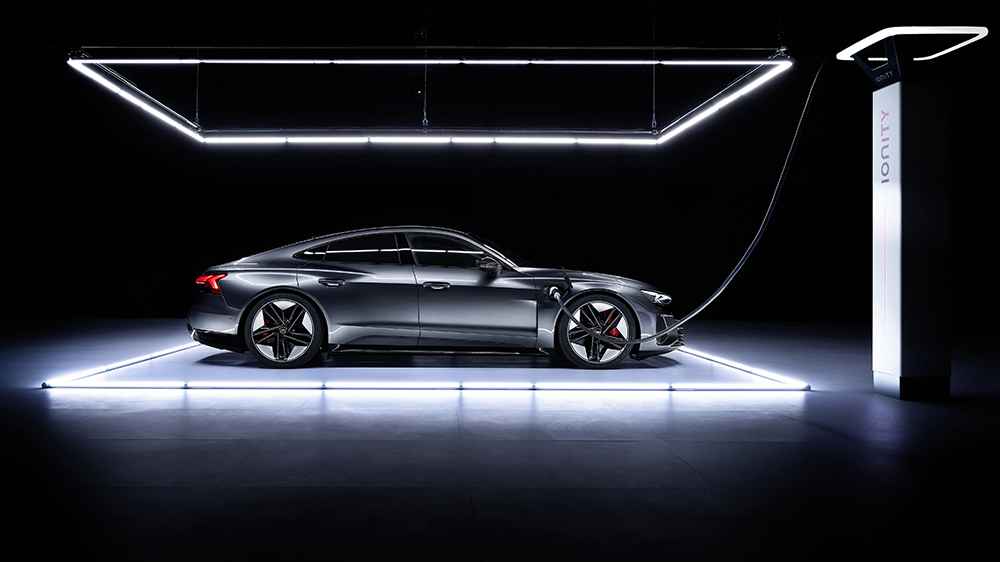 Of course, power isn’t the only performance spec that matters to EV drivers. For many, range may be even more important. In fact, the big ding against the Taycan 4S initially was that it offered a relatively modest range of just over 320 kilometres. That number pales in comparison to the Tesla Model S, which can go 640km on a single charge. It looks as if the E-Tron GT, which features a 93.4 kWh lithium-ion battery pack, will fare just slightly better than the Taycan, with the standard model’s range expected to come in at 380km and the RS’s at 373km. (Notably, those numbers have not been confirmed by the EPA yet.) While neither figure is anything to write home about, the ability to charge the battery from 5 percent to 80 per cent capacity in just over 22 minutes will alleviate some of that burden. And if city driving is your primary plan for the E-Tron, a range of 370-plus kilometres may well meet your everyday needs.

Both the E-Tron GT and RS variant are expected to start arriving in dealerships this September (though it’s unclear whether the two models will arrive on the exact same date). The yet-to-be-revealed Prestige trim package will follow later. As for how much cheddar you’ll have to shell out to put yourself in the new EV, local pricing is yet to be confirmed but in Germany the standard E-Tron GT starts at €99,800 (A$156,000). The RS will set you back (€138,000) approx. $220,000. 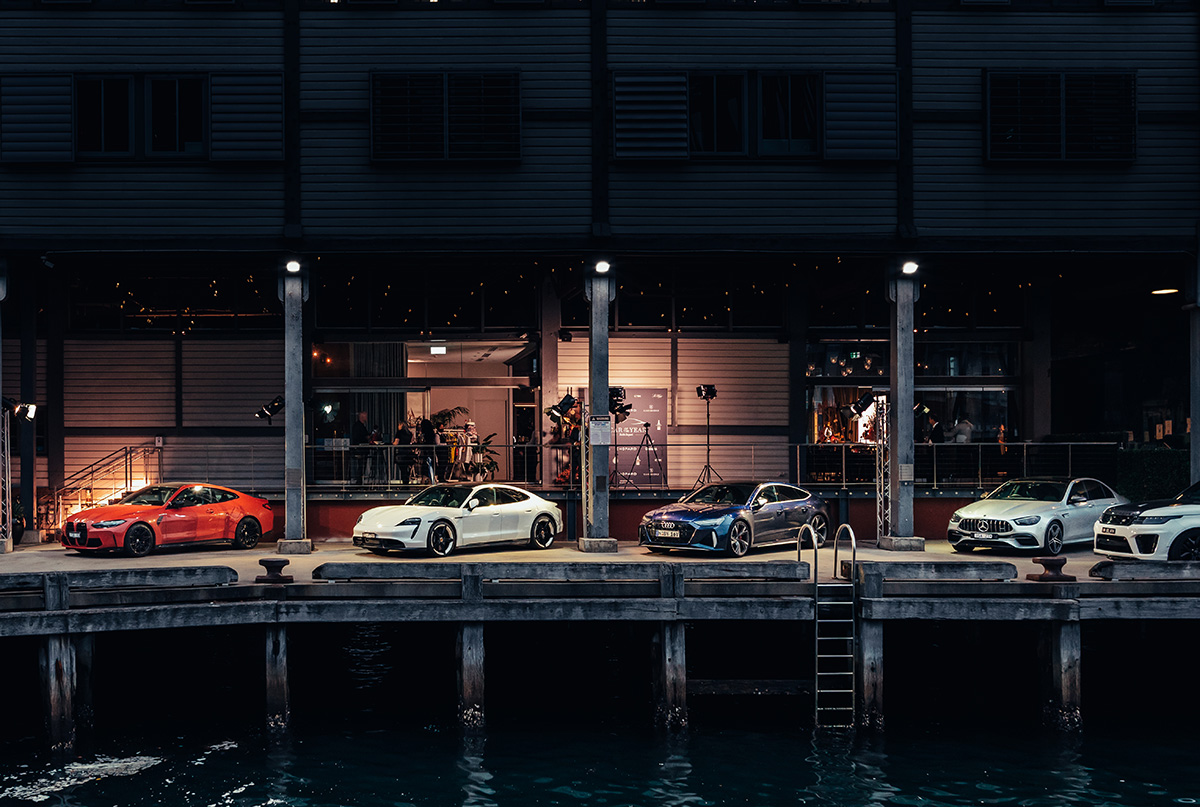