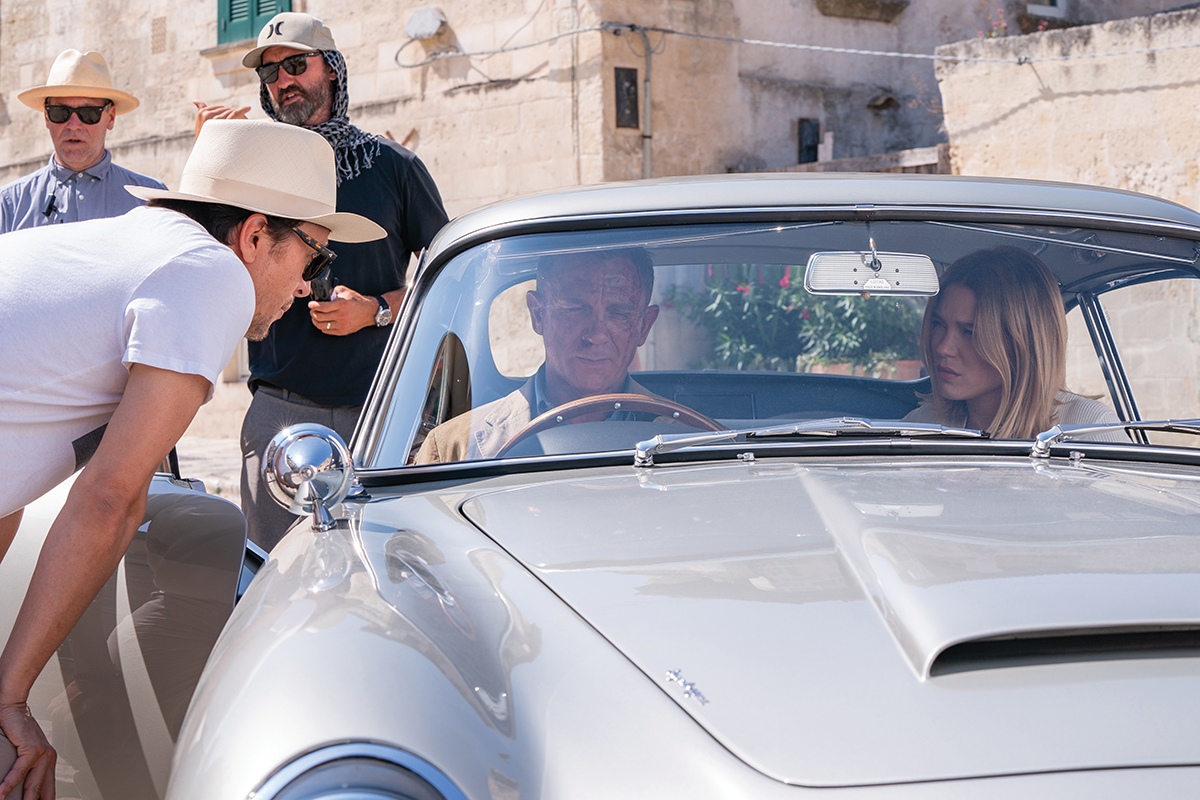 Originally slated for release this week – we take you inside No Time To Die.

The plan is laid bare in all its terrifying simplicity.

Take a classic 1960s Aston Martin DB5, drive along an absurdly narrow Italian alley. Pull the specially made handbrake at appropriate moment. Drift said DB5 into historic square at 145km/h. Do not kill one’s self, or, more importantly, damage the car. Repeat 20 or 30 times, if necessary, until perfection is achieved.

Mark Higgins is a man more than happy to oblige the above decree of ‘management’. As stunt driver and Daniel Craig body-double on the new 007 movie No Time To Die, that’s what he’s paid the big (ish) bucks to do. But first – and no childish sniggering at the back, please – he needs some coke. Otherwise there’s a real possibility that, on the notoriously slippery, dust-coated streets of Matera, the DB5 will simply slide into crunchy oblivion, taking out an ancient church along the way.

“Before filming, we spray the roads with Coca-Cola,” explains Higgins, a three-time British rally champion. “The difference it makes is amazing, increasing grip levels by about 70 per cent. All in all, we’ve spent £70,000 (around $135,000) on Coke for the roads.” 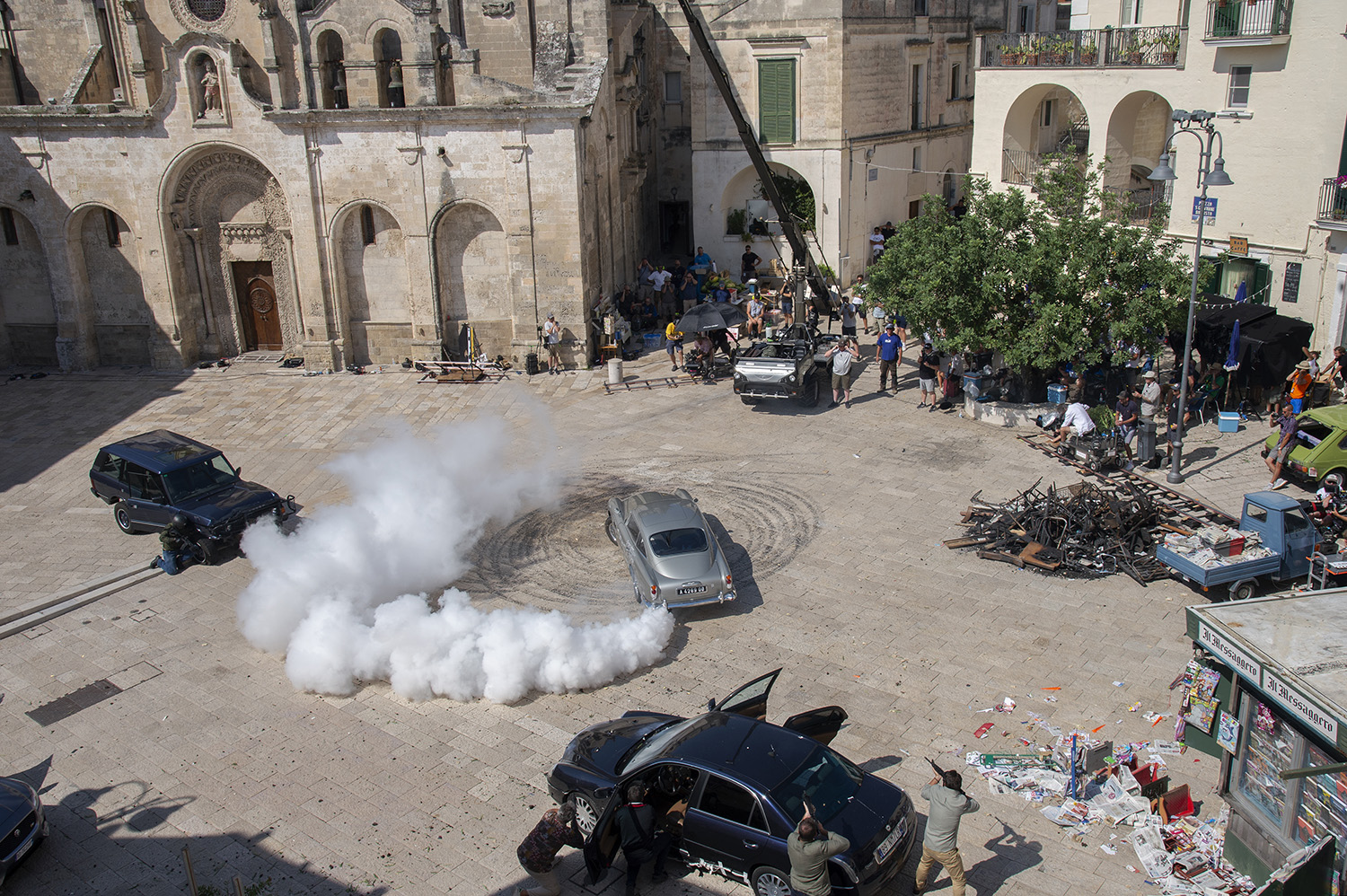 With his face dotted by ‘motion capture’ spots – a digital system that allows the special effects team to later overlay Daniel Craig’s slightly more famous visage – Higgins reveals other tricks used on No Time To Die; such as the minuscule ‘pods’ fixed to the cars’ roofs, allowing the stunt driver to sit up-top and take control of the vehicle while the talent sits below, pretending to drive.

“It’s more like driving a computer game,” Higgins says of this high-riding role. “The steering’s not direct and you feel like you’re going to roll over on every corner.”

Florence has its art and Rome, its architecture. But little-known Matera is proper fantasy Italy – the Europe that Australians pine for on cold, mid-winter days. It’s packed with impossibly thin, undulating cobbled streets; churches capable of melting the flintiest of atheist hearts; simple, seemingly shabby terraces a tenth of the size of a Sydney apartment yet with ten times the soul; buildings, pavements, façades, all brushed with a soft, sandstone palette. And that’s just the ‘newer’ bit. 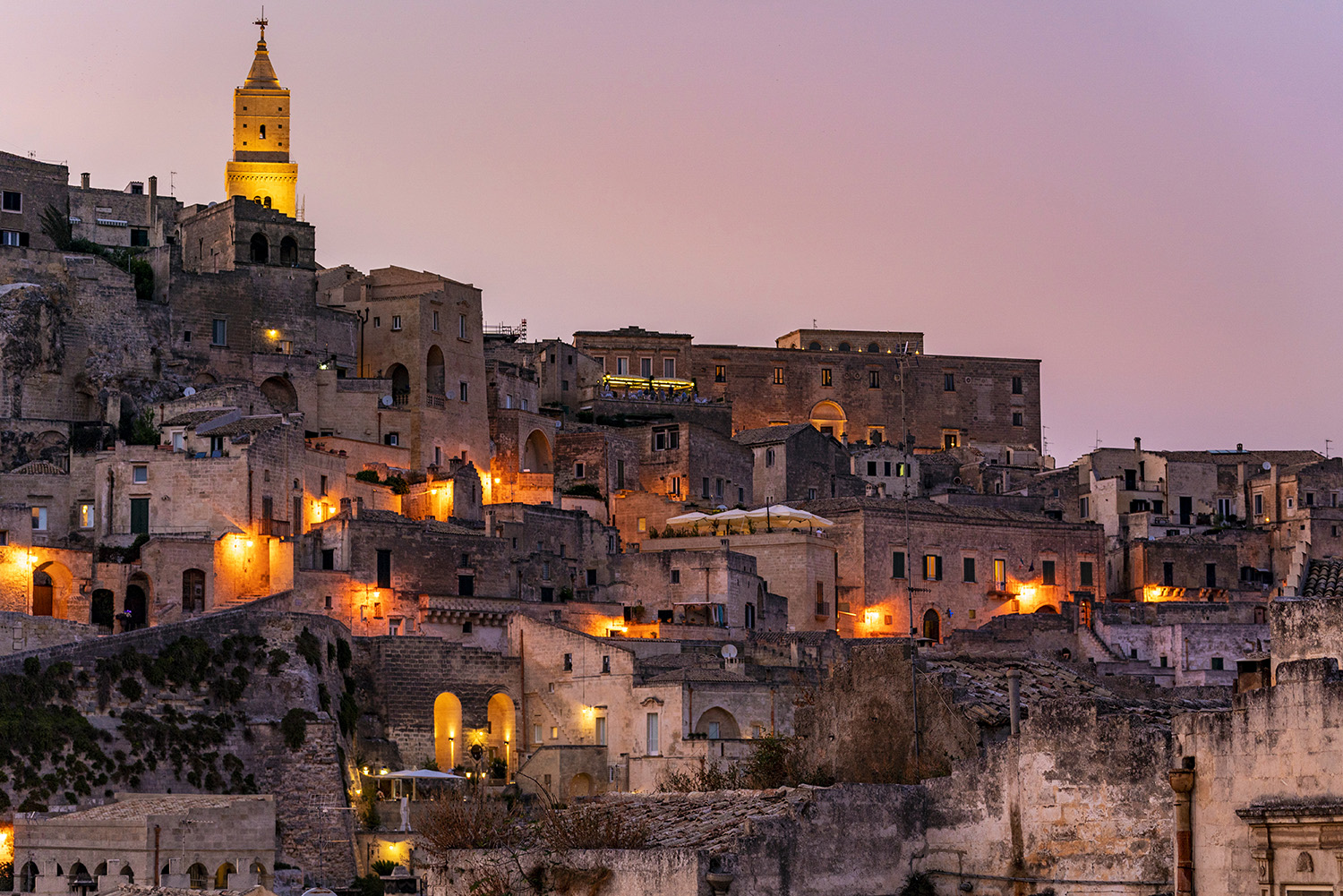 The old, old part – and the reason Matera’s been granted UNESCO World Heritage Site bragging rights – has been inhabited for more than 12,000 years, and now lures savvy tourists who swoon over its tiny cave dwellings.

When Robb Report arrives on a warm Mediterranean morning for an exclusive  insight into filming and how they come
to produce those epic car chases, it’s clear Matera’s days of flying under the radar are numbered.

The area around Piazza San Giovanni, where today’s action will be filmed, has been cordoned off to a perimeter of a few hundred metres – an assortment of Bond groupies and sightseers are gathered at one of the entry points.

To minimise production leaks, residents within the security zone have all signed non-disclosure agreements while Eon Productions, the British company behind the Bond series, has rented every apartment in the piazza for the duration of filming. The less beady iPhone eyes, the better. And hang the expense. 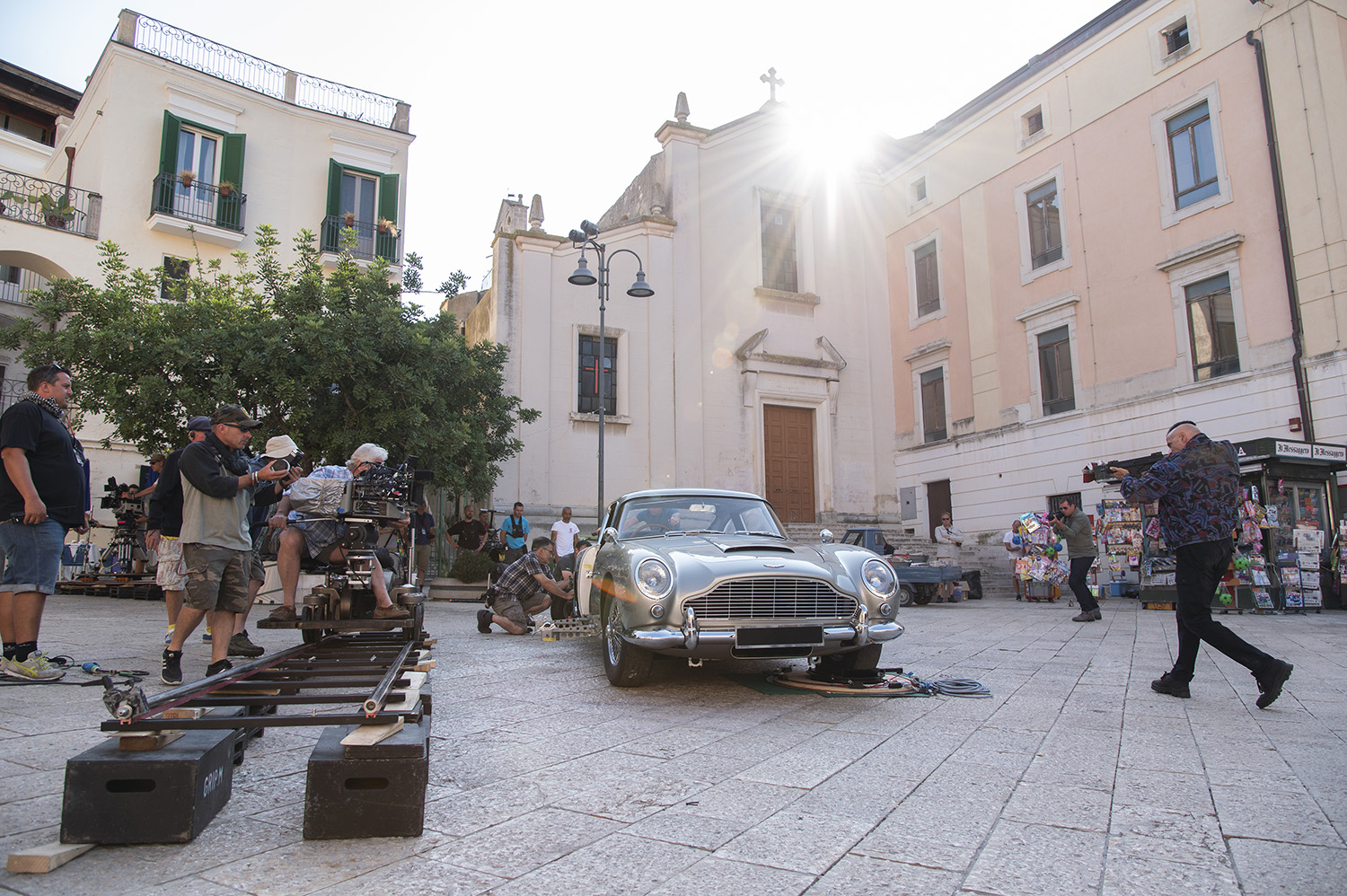 Nevertheless, cracks are appearing in this ring of security. Crystal-clear videos of car-chase scenes, captured in various parts of the old town during the previous three weeks have gone viral on social media, thickening the air of secrecy around what’s already one of the world’s most gossip-piquing movie sagas.

Little surprise, then, that we’re quickly ushered through security, onto the balcony of a three-storey house overlooking the piazza, and then politely asked not to wave our mobiles anywhere near the action taking place below. Fail to comply and we’ll be shot with poisoned umbrella darts. Maybe.

“This is the most challenging city I’ve worked in,” says stunt coordinator Lee Morrison, this his fifth Bond film. He designed and wrote all the car-chase sequences for No Time To Die.

“Matera is such an ancient place. I’ve had to drive around every location at the same speed I’m asking my stunt guys to do, thinking, ‘right, I need to protect that wall with a steel plate or some K-rail [temporary concrete barriers]’. We’ve had to go through so many requirements to get permission to film, but the local council has been very gracious with us.”

Morrison proceeds to outline today’s shoot schedule – first, a scene in which Bond and his love-interest, Madeleine Swann (French actress Léa Seydoux), are cornered in his DB5 by armed villains; in the afternoon, time permitting, the aforementioned high-speed, drifting-into-the-piazza sequence.

“You need stunt drivers with the ability to be extremely precise,” adds Morrison, “who understand what the camera is doing. You can get the fastest, most technical driver in the world, but they don’t understand they’ve only got four seconds to tell a story.”

As yet, no Coca-Cola is being poured onto the sandstone paving stones beneath us in the piazza, but other forms of movie sorcery are being summoned. 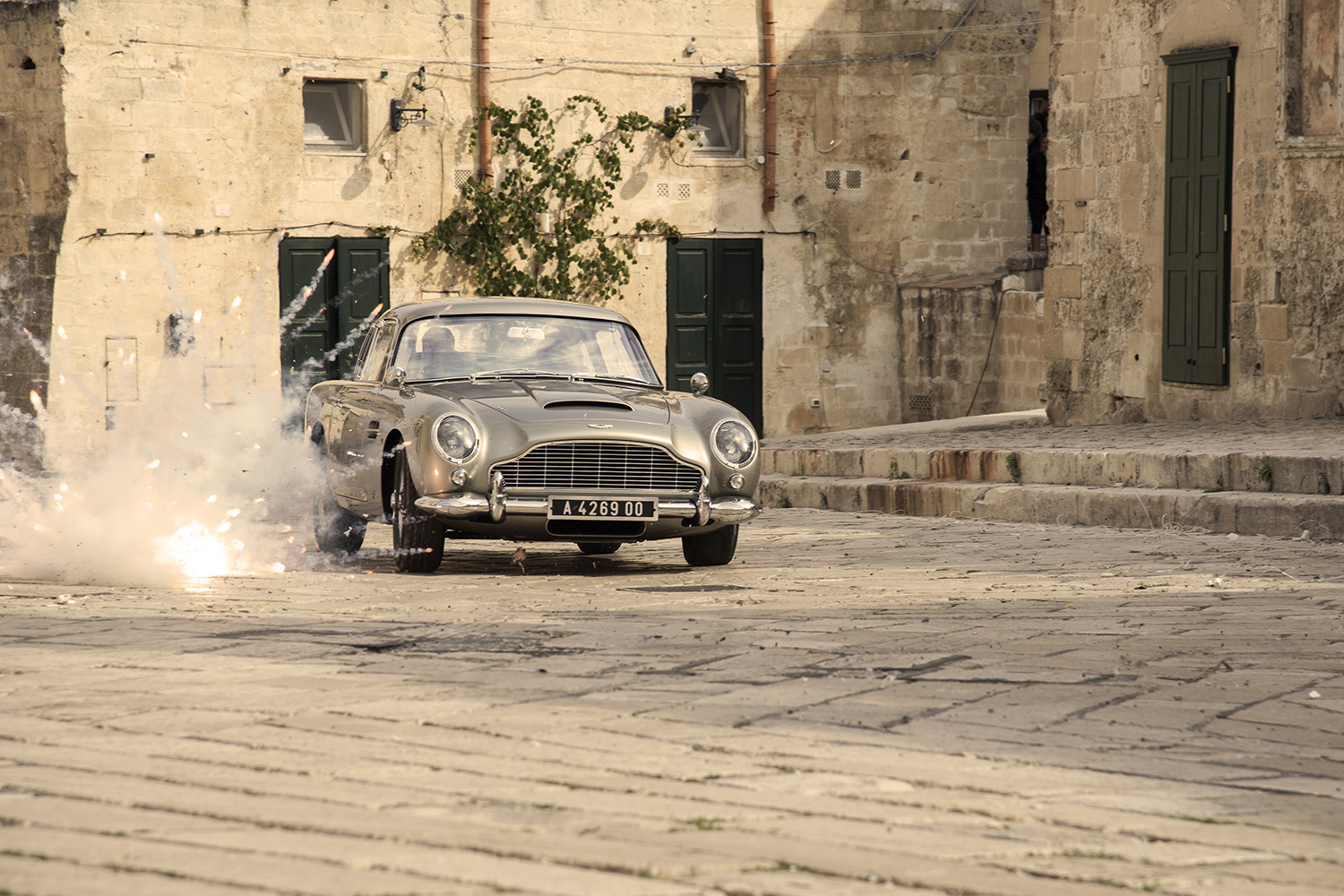 A posse of badly barbered Eurotrash villains are pointing machine guns at Bond’s DB5; sparks ping off the silver bodywork, a sight to force vicarious pain on any vintage-car fan. Except this is movie-land – a celluloid house of mirrors. Real bullets wouldn’t create those kind of sparks, so, instead, the special effects team use ‘squibs’, pellets of gunpowder that simulate ammunition.

The bad guys aren’t even firing them – that’s done by marksmen positioned out of camera shot. As for the bullet holes on the Aston’s flank and windscreen? Mere pieces of art.

When audiences watch Bond escape his foes by engaging the DB5’s headlamp-concealed Gatling guns (while performing a donut, no less), they’ll be oblivious to the analogue mechanics enabling this incredible piece of theatre – how the DB5 is laden with scaffolding poles and ropes to secure the huge IMAX camera filming the car point-of-view sequences; or how, to mimic the donut, four burly crew grab hold of the scaffolding and whirl the DB5 through 360 degrees.

All this time, effort, money, and Coca-Cola, for what will likely amount to about 10 to 15 seconds of useable footage when the movie is finally released to international audiences on April 2nd.

General plot details are being kept strictly under wraps (in a fortified nuclear bunker five kilometres beneath producer Barbara Broccoli’s mansion, most likely).

At the time of writing, only the bare bones have been made public: 007 puts retirement on ice to help locate a kidnapped scientist, only to find himself in the crosshairs of a deranged terrorist, played by Rami Malek (Bohemian Rhapsody). What moviegoers can be certain of are heart-pumping fighting scenes, vaguely titillating nudity and loveable cheesy quips. All the addictive, basic foodstuff that’s helped the Bond universe gross around $16 billion since Ian Fleming’s literary spy made the leap from paper to film reel in 1962’s Dr No.

“The franchise survives because it loops all the things you like about Bond,” says second unit director Alexander Witt, known for his work on The Bourne Identity and Gladiator, among others. “But some people go just to see the cars.”

The roll-call of Bond rides is indeed deeply etched in both movie and automotive annals – from the sublime (the red Mercury Cougar XR7 in On Her Majesty’s Secret Service) to the ridiculous (the Lotus Esprit half-car, half-submarine in The Spy Who Loved Me). But no car, no marque, can touch Aston Martin for pure Bond-ness. 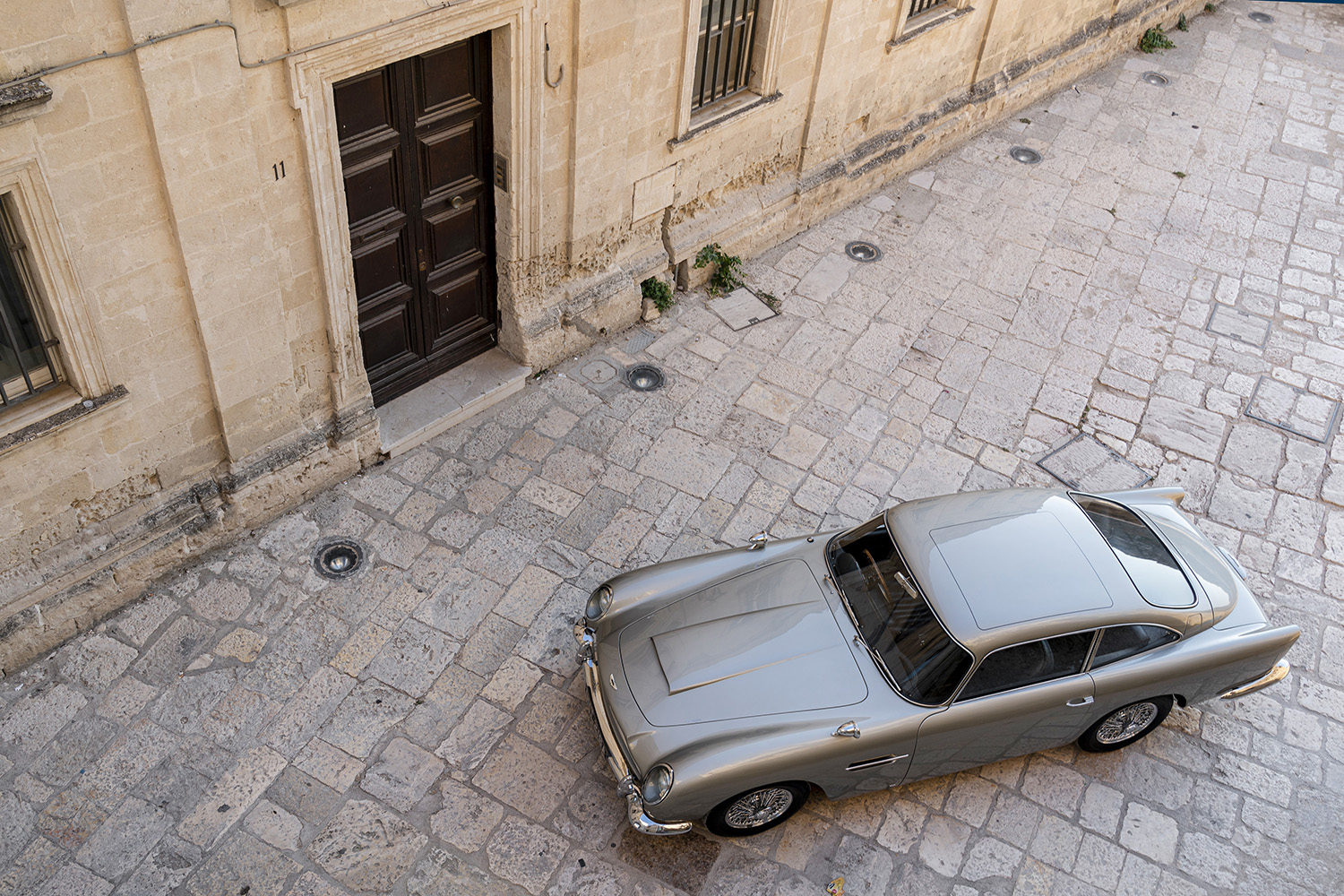 Perhaps that’s why the latest movie comes across as an unabashed, pan-generational homage to the timelessly cool British brand, featuring a 1980s Vantage V8, the new DBS Superleggera, a sneak preview of the Valhalla hypercar (slated for showrooms in 2021) and, of course, the most iconic Bond car of them all, the DB5, first driven by Sean Connery in 1964’s Goldfinger.

In another stroke of movie cunning, the DB5 currently being filmed isn’t the only one of its kind. Eight DB5s have been assigned to No Time To Die, all built from the ground up by Aston Martin’s special-projects division, all completely driveable, all engineered to cope with the rigours of particular scenes, and all with a non-original-spec 268kW under the hood. The majority of them are being stored in the courtyard of a former convent just off the piazza, under the proud, watchful eye of the head of stunt cars, Neil Layton. “The challenge here in Matera is you’ve got five or six different road surfaces that you’re adjusting to all the time,” says Layton. “Once we receive the cars, we test, we rehearse and then we dial in each Aston for a specific scene.”

He singles out a DB5 only metres from where he’s standing. Its flank is scarred by an ugly crater, the result of being deliberately T-boned by a Range Rover Classic during recent filming. “It was painful to watch,” says Layton. “But we’ve done our bit by reinforcing the Aston inside so it can take multiple hits. But if you look at that Rangey…” 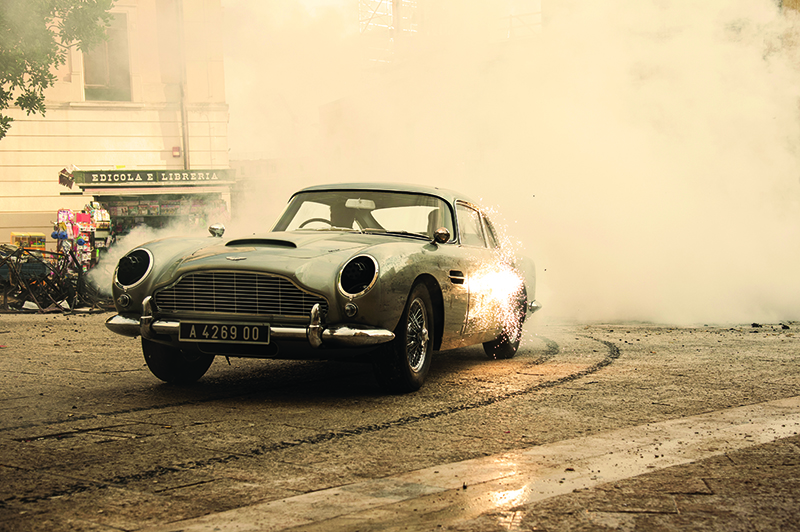 No amount of technical expertise, no amount of money (the No Time To Die budget around $366 million) can guarantee perfection on any set, as evidenced when the DB5’s Gatling guns have an unexplained hissy fit and spill hundreds of bullets onto the piazza. “Humans are involved, and humans make errors,” offers Higgins. “Film sets are a living thing, so stuff can happen.”

And it continues to do so. Throughout the afternoon, dark storm clouds dump their watery loads over Matera, calling a 30-minute halt to filming with each downpour.  Eventually, we’re told by an Eon representative that the much-awaited drifting scene has been postponed until the next day – the daylight fading too fast for the lighting department’s liking.

The DB5 is duly wheeled into the courtyard for the night, the stunt boys stood down. And, for now at least, the Coca-Cola truck remains on stand-by.

After having its initial April 8 release date pushed back, No Time To Die is expected in cinemas 12 November 2020; astonmartin.com