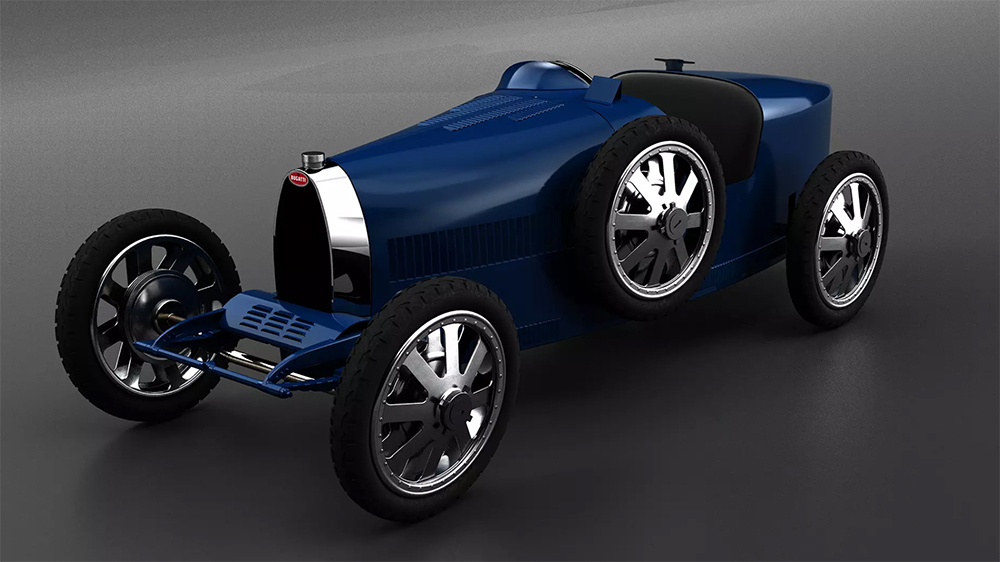 Meet the Baby II, an electric Type 35 recreation for children—and adults. It’s got three power modes, and a Speed Key, just like the Chiron.

Meet the bargain Bugatti, the Baby II. For about the price of a new Mercedes-Benz A-Clas—$48,000—you can have one of 500 immaculately built replications of the Type 35, in miniature stature. To celebrate Bugatti’s 110th anniversary, the French supercar maker is offering this incredible tribute to Ettore’s original creation back in the late 1920s.

Back then, customers had visited the Molsheim plant and were so intrigued by the child-sized one-off version of the Type 35, many asked to purchase one. Meeting demand, Bugatti put the Baby into production and about 500 were made, many winding up in the hands of elated Bugatti collectors, and inducing jealousy in those who couldn’t secure one. Fast forward to today and we’re treated to the Baby II, which will also see a limited production run of 500 units, but unlike its predecessor, the Baby II is three-quarters of the size of the Bugatti Type 35, meaning you can steal it from your kid after he’s had a go and drive it yourself.

The Baby II is designed off a digital scan of the Type 35 (see Robb Report’s current Autumn print edition), originally crafted for the 1924 French Grand Prix, and is hand-built. Like the Baby (AKA type 52), the Baby II is a rear-wheel-drive, battery-powered electric vehicle, but it differs in that it features removable lithium-ion packs, a limited-slip differential, and regenerative braking. (Yes, seriously.) There are three power modes available, including a 1kW child mode that’s good for a regulated top speed of 20km/h, a 4kW adult mode that’ll let you get up to 45km/h, and there’s a “Speed Key,” just like the Chiron’s, that gives you 10kW of juice and removes the speed limiter entirely. We patiently await the hero who buys the Baby II, uses the Speed Key, and uncorks the full potential on video.

Bugatti didn’t skimp on the craftsmanship on the interior either. There’s a signature aluminium dash, leather seat and a scaled-down version of the four-spoke tiller. Custom instruments abound in the dash, too. While it comes dipped in the traditional French Racing Blue, customers can opt for other exterior hues, as well. Modern brakes sit behind the aluminium alloy wheels and a set of headlights means the fun doesn’t have to stop when the sun sets. The Baby II also features a Bugatti badge made of 50g of silver, just like the Chiron.