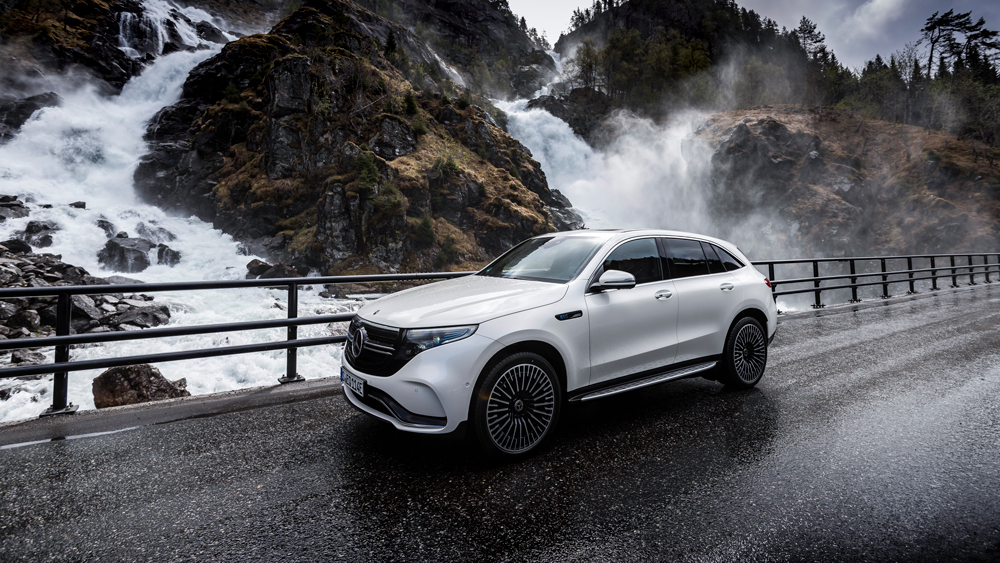 The marque hits it out of the park with the first of ten new electric cars it plans to release in the next three years.

The new Mercedes-Benz EQC is the most important new car in company’s storied, 133-year history: with the possible exception of the very first. Over the next three years, Mercedes will launch ten new EQ-badged electric cars. It has spent $15.8 billion on their development, and they must move the world’s oldest carmaker—and a $89 billion business—safely from the internal combustion age to a future which may be almost exclusively electric.

This EQC—a luxury compact SUV—is the first EQ model to be launched, and Mercedes’ first pure electric car of any real scale or significance. It is a critical car for the company. Its importance was underlined by the arrival of Dr. Dieter Zetsche, Mercedes’ talismanic, long-serving and now outgoing CEO at the windswept Norwegian airfield where a small group of global media was first given the keys to the new car. 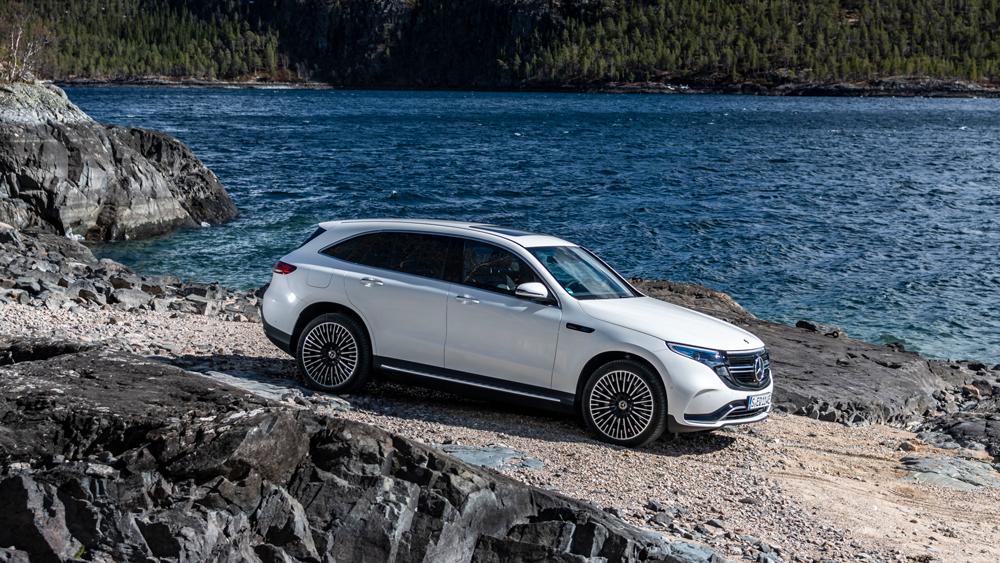 The EQC carries a 416 kilometres range according to European testing standards.
Photo: Courtesy of Mercedes-Benz.

First, the engineering. The EQC has an electric motor on each axle which together produce 300kW and will accelerate the EQC from zero to 100km/h in 4.9 seconds. An 80kWh battery mounted in the floor between the wheels gives a range of between 445 and 470 kilometres (depending on vehicle configuration), according to European cycle NEDC, and can be charged from 10 to 80 per cent in 40 minutes. The EQC is based on and will be built alongside, the conventionally powered GLC and GLC coupe in Bremen, Germany. It shares its basic proportions and dimensions with those cars, but only 15 per cent of its parts. Mercedes’ designers have worked hard to differentiate the EQC from the GLC: those paying a premium for an electric car often want others to know it. The bright EQC badges and glossy black grille certainly make the point, but perhaps not eloquently.

Inside, much of the cabin architecture and switchgear will be familiar from the GLC, but the driver’s dials and central display have been replaced by two vast widescreen displays of Mercedes’ MBUX user interface. And there are some striking new materials which other EQ models will share, including a rose-gold finish on the vents, and a microfiber ‘technical fabric’ on the dash and doors. 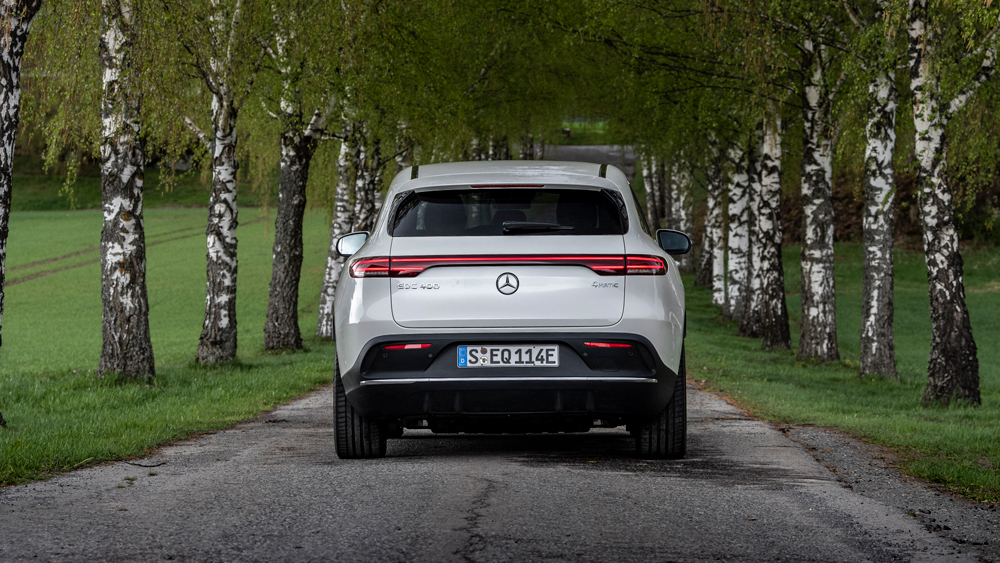 The all-electric, 300kW SUV bolts from zero to 100km/h in 4.9 seconds.
Photo: Courtesy of Mercedes-Benz.

Zetsche wanted the EQs to be as easy to drive as any other Mercedes, and most importantly to feel like a Mercedes. Despite the lack of the internal combustion engine, the EQC does. You can simply climb in, press the starter button, pull the conventional gear selector down to ‘drive’, and surge forward on a seamless, silent stream of torque.

But there’s some hugely impressive code at work here too, if you choose to engage with it. In ‘D-Auto’ mode, the EQC examines the route you’re following on the sat-nav, traffic conditions, current and upcoming speed limits and the proximity and availability of charge points, should you need one. It crunches all of that data and then puts gentle resistance on the ‘gas’ pedal when you’ve reached the optimal acceleration or speed for maximum range: less if it knows you’re approaching a bend, a traffic jam or a lower limit, for example. It’s subtle, optional, but so intelligent that the car feels almost sentient. 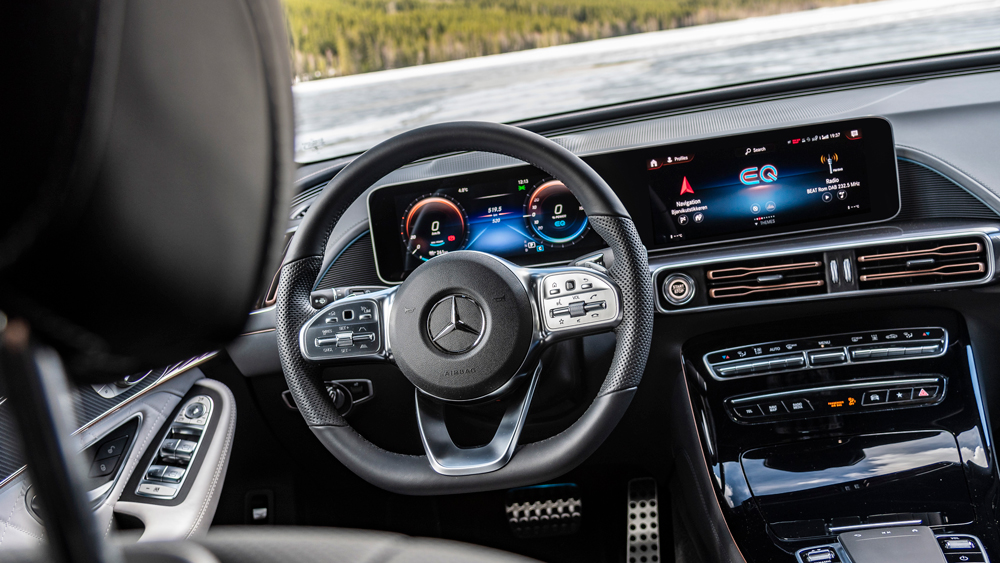 The car’s chief engineer told me that he aimed to out-index the EQC’s growing band of rivals on comfort, noise and refinement, and on first acquaintance the EQC feels like it does exactly that. There is an almost complete absence of the ‘tram noises’ from the electric drivetrain which are occasionally apparent in the rivals. The tire, braking and wind noise which become more noticeable with a near-silent electric drivetrain are well-suppressed. With its silken ride quality and level cornering, the EQC is simply one of the most calm-inducing cars in which you can travel.

As the figures suggest, there’s ballistic acceleration if you want it, but the EQC’s thrust doesn’t feel quite as absurd as that of the Jaguar I-PACE or a high-power Tesla Model X. Nor does its handling—though grippy and benign—encourage you to attack every bend the way the I-PACE does. Instead it feels pleasingly like a Mercedes of old: magnificently engineered, supremely refined, but a car in which to waft rather than carve. 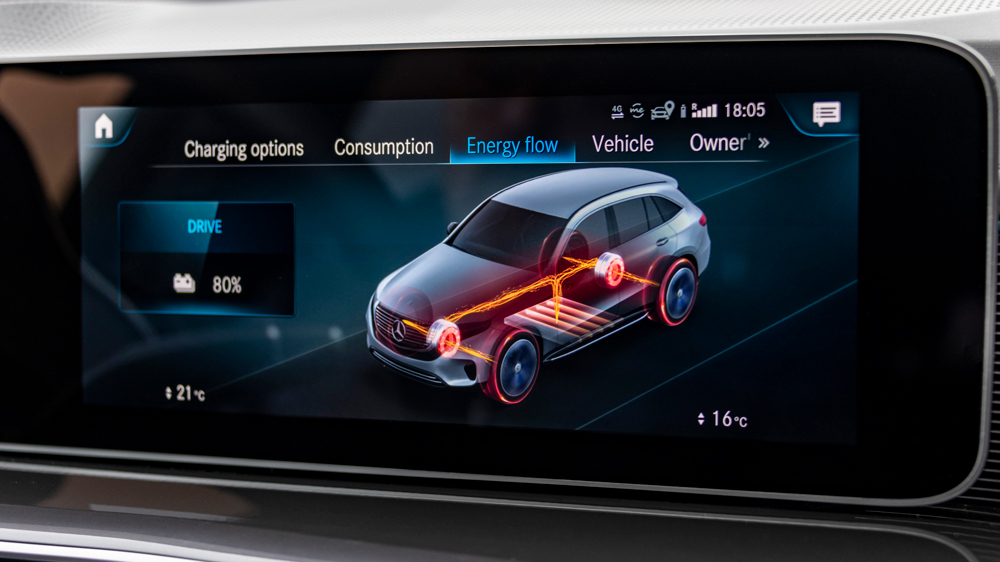 The EQC has an electric motor on each axle and an 80 kWh battery mounted in the floor.
Photo: Courtesy of Mercedes-Benz.

The EQC and the recently launched Audi e-tron join the I-PACE and Model X to create an entire new class of luxury EV crossovers. I drove all four in the space of three days. Push me for my choice, and I’d agonize between the free-thinking Model X, and the supremely refined EQC. If this is the Mercedes of the future, the future of Mercedes looks assured.