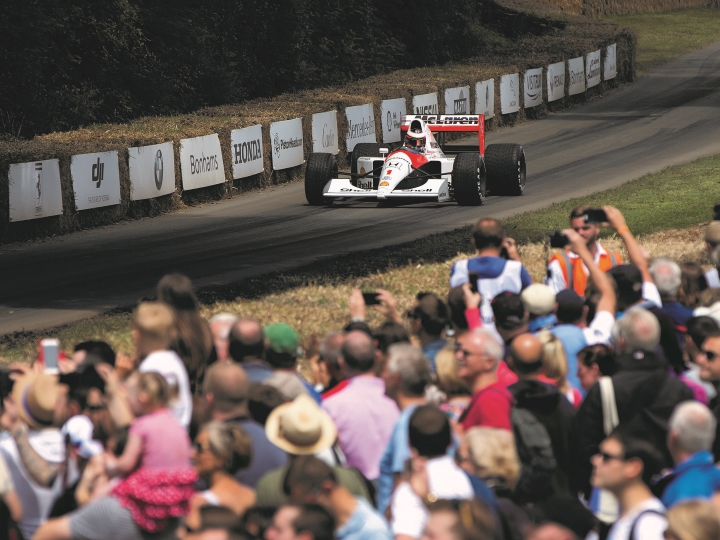 The Goodwood Festival of Speed has classics, supercars, celebrities – and it’s just one of motoring’s must-do destinations.

If there’s just one event that every motoring-minded person needs to see, it’s … well, if there is one such event, there must be at least 10. What with epic motor races, heroic monuments and classic-car concours d’elegance, the fuel-afflicted globetrotter can fit two or three into their calendar each year.

In Europe this summer, I managed to tick another two from a list that I realise I’ve never actually written down. Having been born into a motorsport family, it’s simply been written in my DNA. The Indianapolis 500’s brand of roundy-round racing isn’t to all tastes, but the Indianapolis Motor Speedway is the world’s oldest existing race circuit and a sporting Coliseum on an unrivalled scale. Bonneville Speed Week is an egalitarian gathering of both backyard and big-bucks engineering held on western Utah’s salt flats each August. Land speed records for every imaginable vehicle have been set here since 1914, though Speed Week grew out of post-war hot-rodding. Happily, it still displays that laid-back flavour.

In neighbouring Colorado is America’s second-oldest annual motor race, the (literally) breathtaking Pikes Peak International Hill Climb. The timed race to the 4300m summit, on a road that was unsealed and unfenced until 2012, celebrated its centenary this June. As at Bonneville, the run-what-you-brung inventiveness is as fascinating as the racing itself.

The opulent antithesis is the Concours d’Elegance on the glorious Pebble Beach Golf Links in Monterey, California. Concurrently on the nearby Laguna Seca raceway, around 500 likewise pedigreed classic cars are stropped senseless during the Monterey Motorsports Reunion. During Pebble Beach week each August, the private jet parking lot at Monterey Peninsula Airport alone is worth the trip.

Clearly, Europe has no monopoly on obligatory automotive events. But the Monaco Grand Prix is probably the GP to see; while at the opposite end of the comfort scale, the Isle of Man Tourist Trophy motorcycle race is older than Indianapolis and, sadly, the deadliest of all motor races. And Europe has the 24 Hours of Le Mans. It first ran in 1923 outside the same town (albeit, on different roads) that held the world’s first grand prix race in 1906. For many, though, Le Mans hit the motorsport map in 1971, courtesy of Steve McQueen; fans of that era can stick around a few extra weeks for the biennial Le Mans Classic, for authentic machines from the 1920s to the ’80s.Germany’s Nürbürgring Nordschleife (north circuit) is a terrifying 21km serpent through the Eifel forests. Each May it hosts a spectacular 24-hour race for a 200-strong field of current GT cars. Most days, from April to October, for €29 per lap, you can drive the Nordschleife with no speed limit. Then there’s Goodwood. Top-line motor racing was held from 1948 to 1966 on this Surrey estate of the high-octane aristocrat March family. In 1993, Goodwood introduced the Festival of Speed – effectively, a high-speed motor show up the estate’s 1.9km driveway – and in 1998 the Goodwood Revival, with historic racing on the original circuit.

As I’ve just found for myself, the Festival of Speed really is a sensory overload of supercars, legendary racing cars, gorgeous motorcycles, scary rally cars and slender Formula 1 machines. You can touch them, talk to their owners, watch slack-jawed as they scream and slither up the hill – their drivers (and passengers) clearly as excited and awe-struck by the occasion as the spectators. It had taken three hours to crawl the last few kilometres of charming English lanes; as long again to get out. Saturday rain and 150,000 people turned the lush grass paths into skating rinks. Experienced Festival-goers were obvious in their grippy-soled gumboots.

Padding carefully from the Driver’s Club to the Supercar Paddock, I passed Keanu Reeves, Jenson Button and 1980s F1 star René Arnoux (pictured below with the author). I overheard someone from Ferrari fretting that film director Tim Burton awaited his ride in the (€2.5m) FXX-K supercar. The marshalling was efficient, never officious. Owners, drivers, celebrities and spectators are made as equals through their shared appreciation of the machines and the achievements they represent.

A few weeks later, I was in a heatwave at Classic Le Mans, surrounded by even more cars, people and history – but that’s a story for another edition. For now, I’ve still got the Goodwood Revival, the Indianapolis 500 and the Isle of Man TT on my to-do list. That’s okay: something tells me they won’t be going anywhere fast.