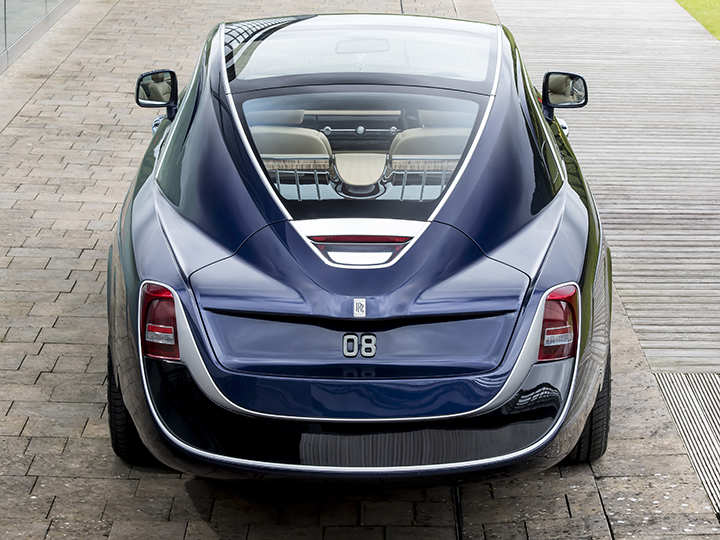 The Sweptail is the most audacious Rolls-Royce in 70 years

Italy’s Concorso d’Eleganza Villa d’Este is legendary for hosting high-profile debuts of world-class concept cars, and this year’s edition proved no exception, as evidenced by the unveiling of the Rolls-Royce Sweptail — a different kind of milestone from the British carmaker. Boasting a lavishly raked silhouette, imposing visage, and dramatically tapered glass roofline, the audacious one-off is the first factory-built custom coachwork to hail from the marque’s facility in Goodwood, England, in seven decades.

The vehicle, commissioned by a client who happens to reside near Villa d’Este, is the product of four years of intensive collaboration. The Sweptail’s unexpected curves and expansive sheet metal explore the boundaries of Rolls-Royce’s famously composed design language, offering a uniquely sweeping expression of the brand’s DNA. Following the client’s request for a unique two-seat Rolls-Royce, Director of Design Giles Taylor set out to realise his vision by exploring the client’s personal tastes. The creative dialogue encompassed all aspects of the vehicle’s specifications, from its imposing, twin rounded headlights (which recall the Phantom II of the 1920s and 1930s) to numerous design details inspired by the client’s tastes in classic and contemporary yachts — most notably, the curvature of the stern which offers a hat tip to the nautical world. Up front, the famous grille — in this case, the largest of any modern Rolls-Royce — has been milled from solid aluminum and hand-polished to a mirror finish.

Inside, great effort was taken to hide buttons and knobs, tucking the controls away in order to create an opulent but minimalist space. By incorporating sweeps of polished Macassar ebony and open-pore Paldao throughout the cabin, the Sweptail takes on an even more sumptuous feel. The center console, which is surrounded by contrasting Moccasin and Dark Spice leather trim, features a champagne holder and two crystal flutes. The rear seats are replaced with a middle shelf of wood accented with a thin, illuminated glass lip. And tucked behind the coach doors is a pair of panniers holding two custom-made attaché cases that can be released at the push of a button.

In all, the exhaustive process of conceptualisation, design, and execution of the Sweptail project revitalises an age-old automotive art that has the potential to usher in a new era for bespoke Rolls-Royces.