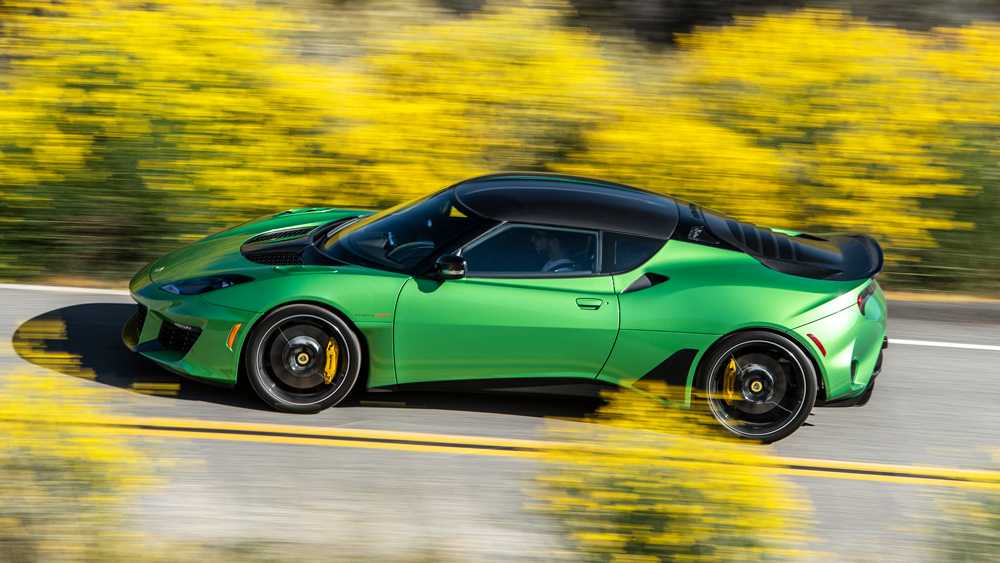 Before considering the 2020 Lotus Evora GT, take a moment to appreciate the company that makes it. Lotus’s racing pedigree stands up with the greats. Team Lotus racked up 79 wins between 1958 and 1987 in Formula 1 racing, taking seven constructors’ and six drivers’ championships along the way. That’s fifth on the list of all-time wins. It was at the forefront of the rear-engine revolution at the Indianapolis 500 during the early 1960s. And in 1965 Jim Clark drove the fantastic Lotus 38 to victory after leading an amazing 190 of the 200 laps. It was the first victory for a rear-engine car in that race and the other 10 laps were led by A.J. Foyt in another Lotus 38. Throw in a few thousand victories in other series beyond that. 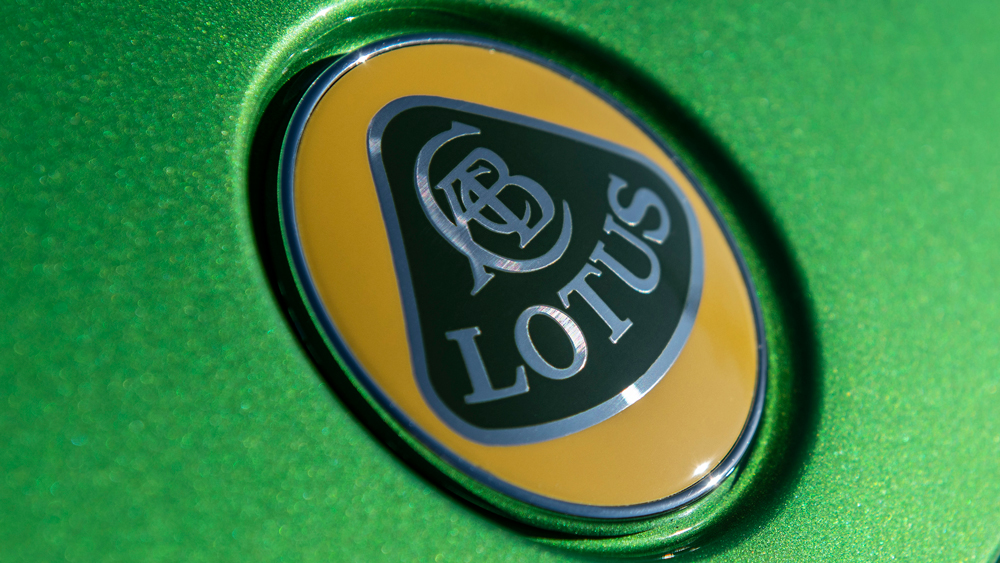 A winning legacy rests behind the Lotus logo.
Photo: Courtesy of Lotus Cars.

Founded and led by Colin Chapman, Lotus brought such innovations as stressed member engines, ground effects aerodynamics and active suspension to racing. And all along it has also produced road cars like the minimalist Lotus 7, the elegant original Elan, and the mid-engine Esprit. Cars that just weren’t great sports cars of the 1960s and 1970s, but driven by The Prisoner, Emma Peel in The Avengers and James Bond during The Spy Who Loved Me. Iconic is an overused and trite word. But these are icons.

The Evora itself was introduced a decade ago as a 2010 model. But the GT is a sweetly upgraded Evora that completely replaces the Evora 400 model. Sweetened, but not saccharine. 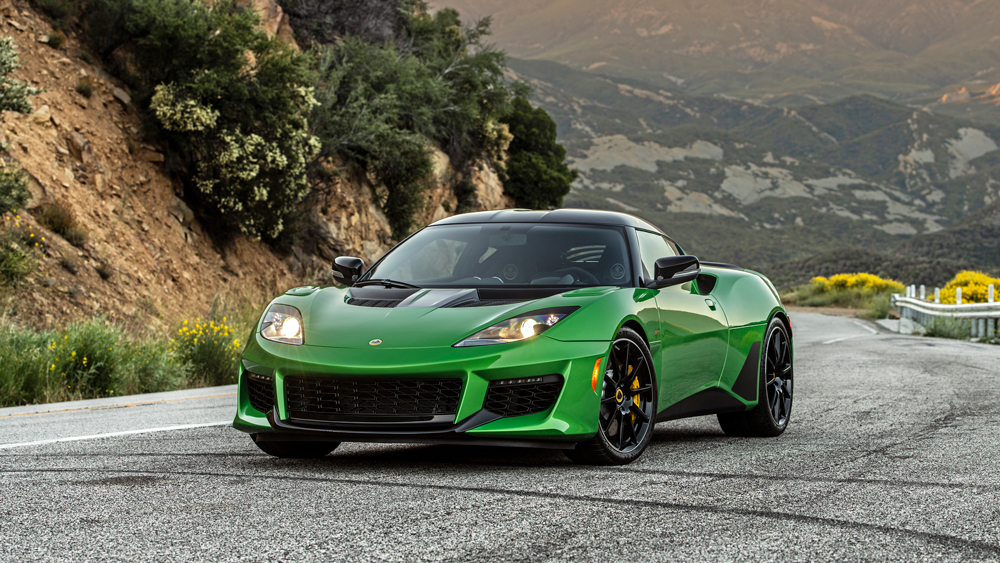 Most of the Evora GT is familiar Evora stuff. It’s a mid-engine, rear-drive two-seater with tiny seats in the back that are really just a place to store your iPad and a jacket. The cockpit makes up most of the centre section of the car and is constructed around bonded (i.e. glued) and bolted aluminium castings and extrusions. An aluminium subframe holds the front suspension while a mostly steel subframe carries the engine in back.

The engine itself is Toyota’s familiar 2GR-FE 3.5-litre V-6, as seen in everything from the Toyota Avalon sedan and Lexus RX350 crossover to the Sienna minivan. What the Evora GT has that those other vehicles don’t is a Roots-style supercharger bolted to the engine. Built by Edelbrock in California, the charge-cooled blower boosts output of the Toyota engine (rated at 200kW in the 2018 Lexus ES 350) to a robust 310kW. 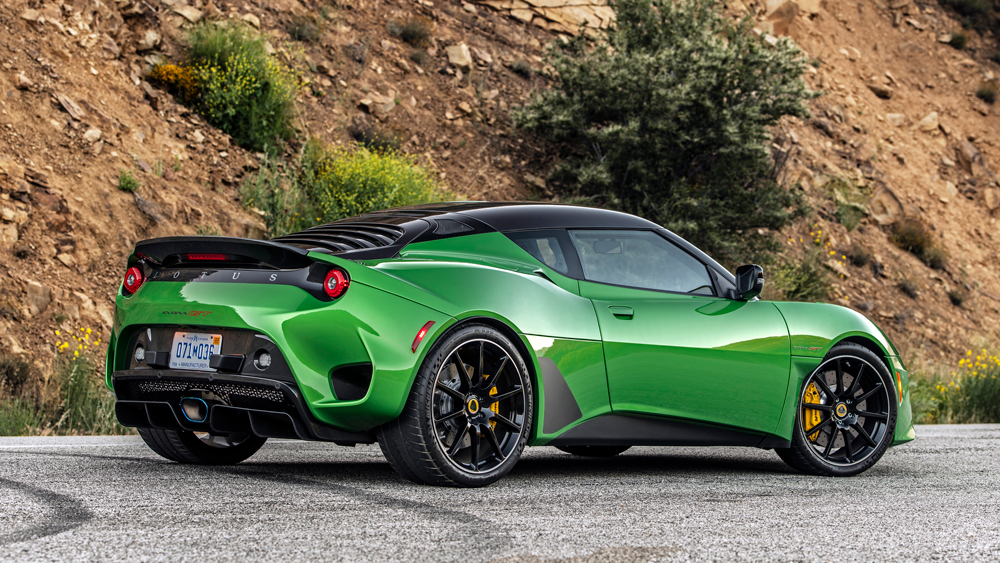 Also unchanged are the available Toyota-spec Aisin-made six-speed transaxles. Lotus tightens up the ratios in the manual version, but leaves the automatic, which can be shifted manually using paddles, untouched.

In an age of digital interfaces, the Evora GT is a resolutely analog car. It’s not an easy car to get in and out of but, once in it, what the driver faces is a speedometer and tach with real needles sweeping over round faces. There are some supplementary gauges that are electronically displayed, but the important information is delivered by instruments that look like they’re off a 1973 Kawasaki Z1. That’s old school. 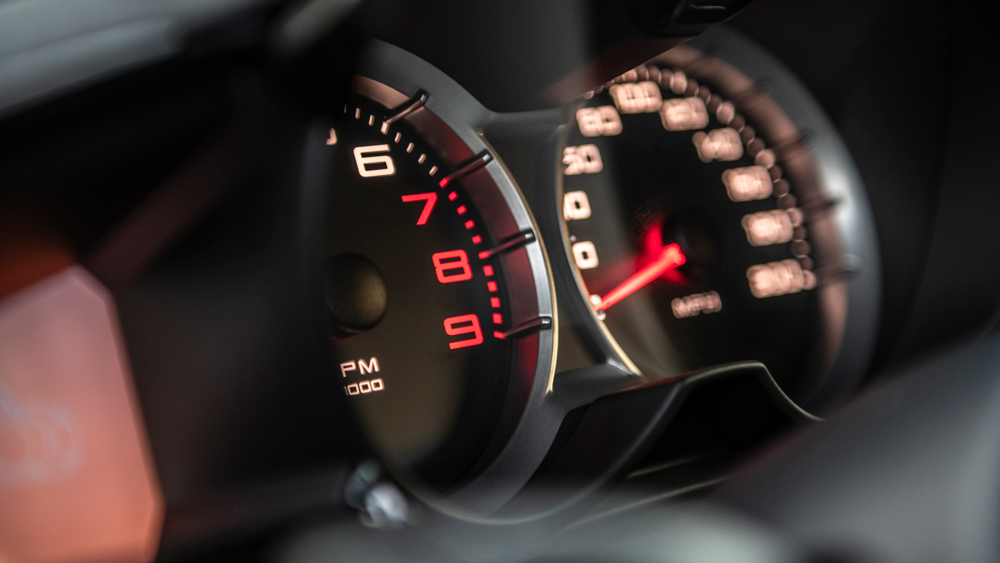 The manual’s shifter takes a slight shove to find first gear, but is otherwise precise in the most satisfyingly mechanical way. That in mind, the supercharged engine offers gobs of torque—peaking at 430Nm with the manual and 436Nm with the automatic—from just off idle to about 6000rpm. At times, it’s barely necessary to shift at all. Leave the transmission in third and you can spend hours thoroughly amused on Southern California backroads. 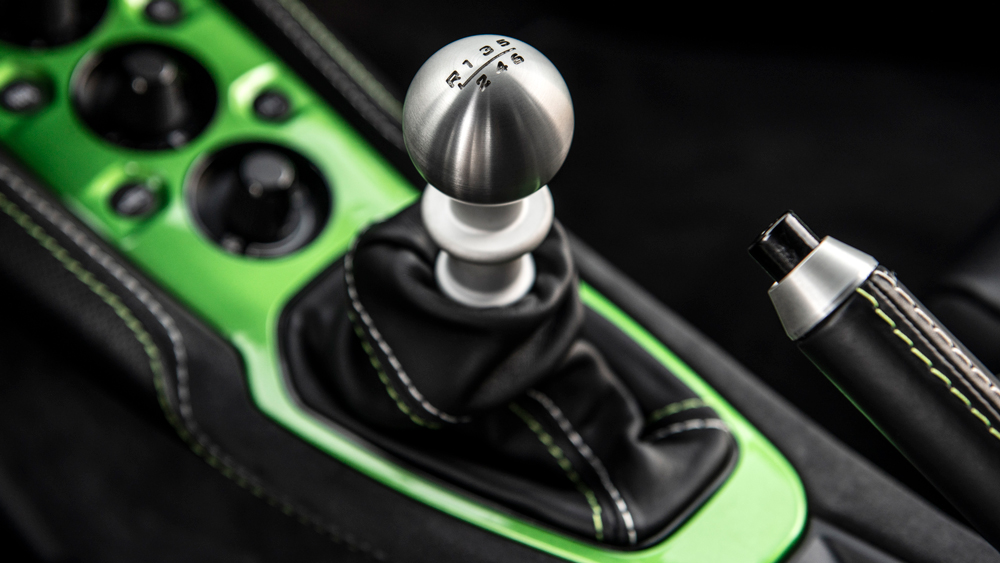 The manual shifter, precise in the most satisfyingly mechanical way.
Photo: Courtesy of Lotus Cars.

But the Evora GT is kind of dinky inside. So be on intimate terms with your co-pilot. And there are some awkward elements to the ergonomics. The pedals are skewed to the right and tightly packed together. So wear ballet slippers.

The steering wheel, flat bottomed, thick-rimmed, covered in Alcantara and perfectly sized, is perfect. And best of all it’s connected to a perfectly weighted, hydraulically assisted steering rack. And that rack is shoving around 245/35Z19 Michelin Pilot Sport Cup 2 tires that are among the very best in the world. That results in great feedback to the driver, nearly instantaneous reflexes and loads of fun driving. Meanwhile the rear end stays planted atop meaty 295/30ZR20 Pilot Sport Cup 2s that stick as if they were dunked in Gorilla Glue. 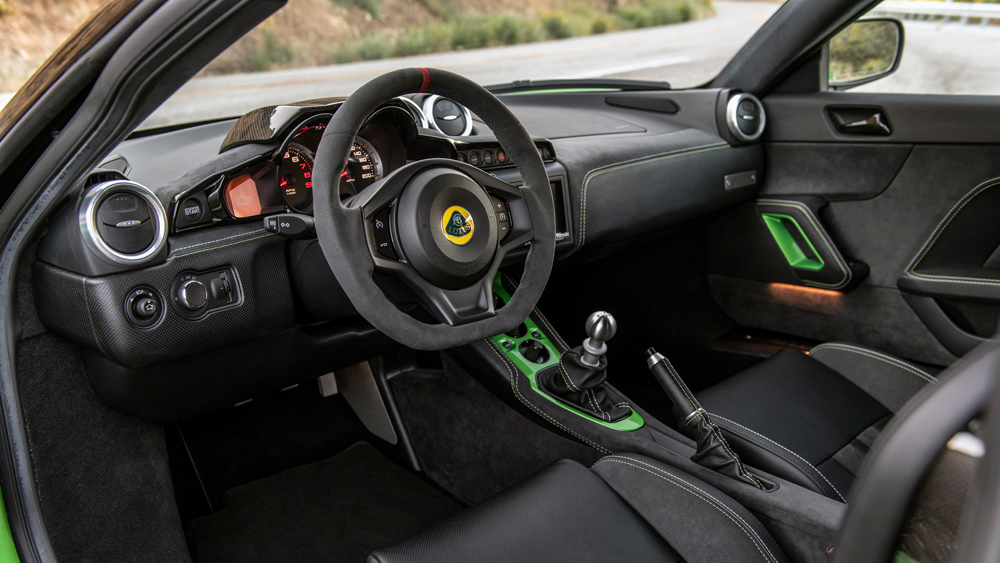 The compact yet comely interior.
Photo: Courtesy of Lotus Cars.

There have been tweaks to the Evora GT’s aerodynamics and the addition of some carbon-fibre pieces have dropped the weight down so that the car comes in at a svelte 1440kgs. Yet the Evora feels tight and solid; like a car that’s been in production for a decade.
With its titanium exhaust (an $8,000 option) tuned to a mid-range vibrato, the Evora GT is dramatic, but never high drama. It’s fast, Lotus claims zero-to-100km/h in 3.8-seconds and a top speed of 302km/h, but there are faster. And while it’s a car that carries all sorts of modern tech like traction control and anti-lock braking, exceeding its limits is possible. And when they’re exceeded, the driver only has talent to lean on when it comes to recovering. 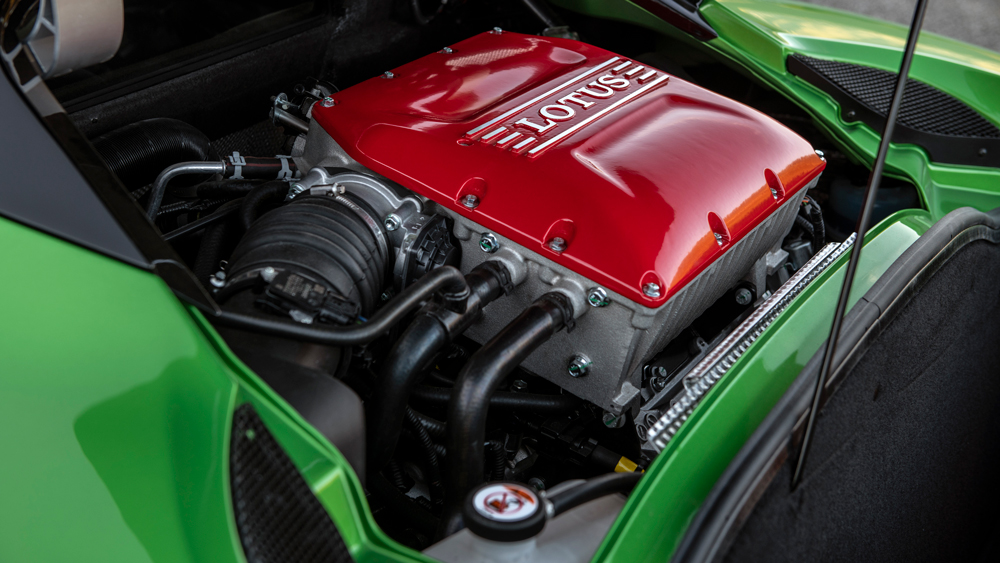 The 310kW, 3.5-litre V-6 benefits from a supercharger by Edelbrock.
Photo: Courtesy of Lotus Cars.

Some will criticize the Evora GT for not being a thoroughbred like a Ferrari or Porsche. After all, it’s powered by an engine out of a Camry. But Lotuses have always leveraged the parts bins of other makers—Mario Andretti won the 1978 Formula 1 World Championship driving a Lotus 79 powered by a Ford engine. (Albeit that Ford engine was the glorious Cosworth DFV V8, but you get the point.) The supercharged Camry engine works great. The Evora GT is among the very easiest new sports cars to drive very fast, and the AP Racing oversize disc brakes are awesome too. 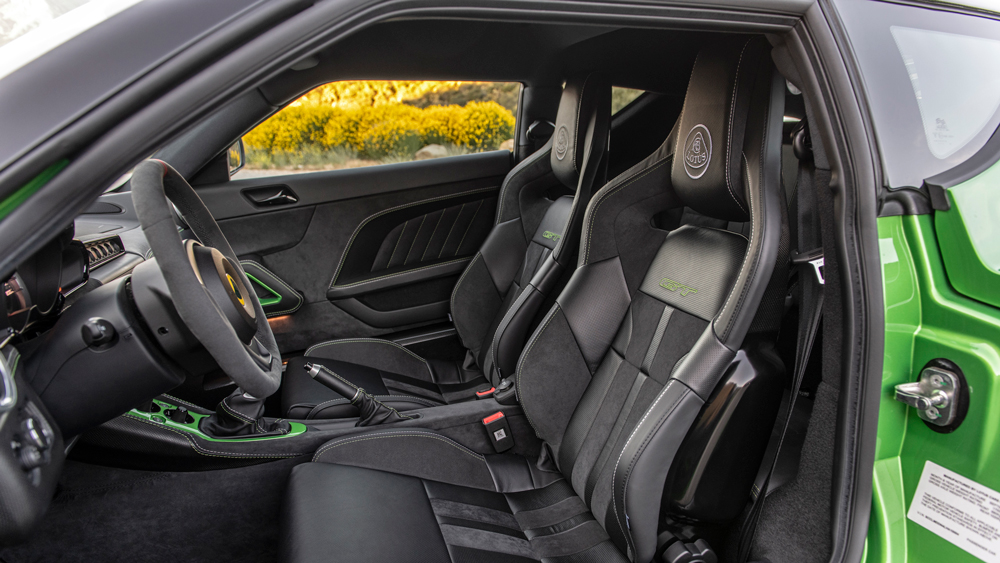 Inside the 1440kg coupe.
Photo: Courtesy of Lotus Cars.

Is good and fast enough? The Evora GT is handsome, but it’s not astonishing like a Ferrari F8 Tributo or Lamborghini Huracán EVO. It’s exclusive, but frankly, the Lotus name doesn’t currently have the street cred of McLaren or Porsche. It’s a car for sophisticated palettes. For buyers who want something that delivers a great drive, without attracting all the attention. 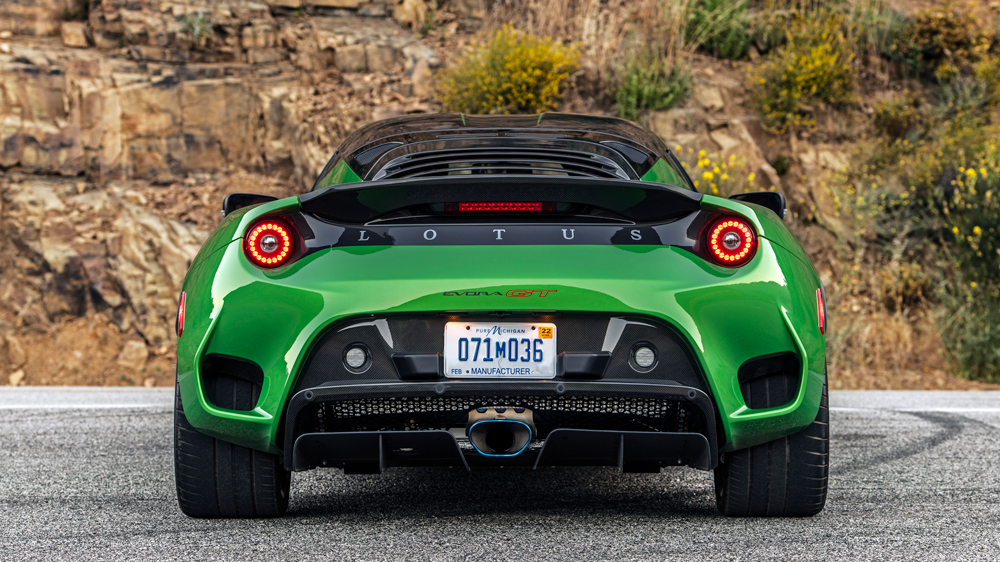