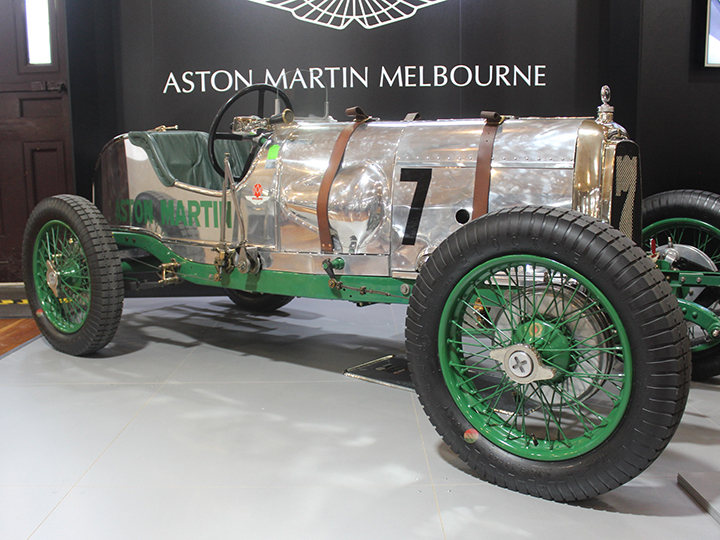 Ten cars at Motorclassica you won’t want to miss

In the absence of an Australian motor show, it’s the closest thing Australia has to a bona fide vehicular showcase.

The Pebble Beach Concours d’ Elegance, Goodwood Festival, Concorso d’Eleganza Villa d’Este and … Motorclassica. The latter isn’t yet in the same world-famous category as its peers, but continues to grow in stature each year.

Housed at Melbourne’s imposing Royal Exhibition Building, it brings together some of the rarest and most valuable vehicles spanning vintage, classic and contemporary. In the absence of an Australian motor show, it’s the closest thing Australia has to a bona fide vehicular showcase.

“I think that Motorclassica fills a niche that’s never been filled in Australia before, where enthusiasts can come together and celebrate their passion,” says Paul Mathers, Motorclassica’s event director.

“Motorclassica has taken a lead from a lot of international events but over eight years it has evolved into something that’s very Australian and very unique. “Australians love motoring, we have big distances to cover, so cars are in our DNA and we need to celebrate that. People who define themselves by the cars they drive, they need to be with like-minded people.

“I’ve seen at Motorclassica three generations of family – son, father, grandfather – come together and talk about cars, tell stories of their past, their family history that has revolved around the automobile.

“I often say that Motorclassica is not about the cars, it’s about the people, that’s the enduring appeal.”

This year, Motorclassica is featuring the 70th anniversary of the founding of Ferrari with a display of cars valued at $50 million. This includes the eye-wateringly expensive LaFerrari Aperta (above), a brand new hypercar valued around $12 million. Holden is also celebrating a centenary of Australian coachbuilding, while Lancia salutes its 110-year anniversary.

Here are the 10 cars we think you shouldn’t miss at Motorclassica this week. Ferrari is one of the headline acts this year at Motorclassica as it celebrates its 70th anniversary, and has wheeled out some very big guns – more than $50 million worth, by official estimates. One of the biggest and most eye-catching is the F40 supercar, conceived in 1987 not only to celebrate the marque’s 40th anniversary, but also to give a bloody nose to rivals Lamborghini and Porsche, whose Countach and 959 models were established stars. Physically imposing and with the performance to back it up, it also has the distinction of being the last production model overseen by founder Enzo Ferrari. A rare example of the storied Jaguar D-Type is one of the stars of the Mossgreen Auction, taking place on Saturday, October 14, with a price guide of $7-8 million. The D-Type was built to contest the 24 Hours of Le Mans race, which it did many times over. This example never contested Le Mans but was consistently raced – and also crashed – over many years and in the hands of many owners around the world, including in Australia. The little Holden battler earned its place in racing folklore not so much for its winning prowess – which was prodigious, including winning the Australian Touring Car Championship in the hands of Peter Brock – but for one of the more bizarre incidents in the history of the annual Bathurst endurance race. Brock and co-driver Doug Chivas had led the 1973 race for most of the day before it ran out of petrol in pit lane, forcing Chivas to the unedifying spectacle of pushing the car on his own up the steep lane to their pit box for refuelling. The pair recovered to finish second in The Great Race. Also known as ‘The Silver Express”, the Kremer-tuned Porsche 911 in distinctive Gulf livery is as eye-catching as it is potent. Described by Modern Motor magazine in 1978 as “the stuff of dreams in solid, unbeatable, unstuffupable super sure-footed reality”, the 911 was as potent a road-going car as it was possible to buy in the late 1970s. Owned by motoring journalist and Sydney radio personality David Berthon, this Silver Ghost has undergone an immaculate restoration over the past 15 years and is in stunning condition. It was one of only 22 cars out of a production run of more than 7000 that was built with a four-speed gearbox, something very rare for the time. It has since served time in the military, as a tow truck and a mourning car, and lay neglected in a Sydney backyard for many years before being rediscovered in 1966 and fitted with its current body. The DS21 is, admittedly, difficult to miss in a fetching hue of salmon with contrasting blue leather seats, and with a shape and bulk that is completely unique in this company. Hugely popular in Europe, the Citroen DS was a cult favourite in Australia and this car made an appearance in the 2000 film The Goddess of 1967. A true and rare piece of Australian automotive history is the Hurricane concept, a design study that was sadly never destined for production. With a mid-mounted V8, extreme wedge shape and standing just 990 millimetres tall, it was light years ahead of anything else Australian-made at the time, perhaps best compared to Ferrari’s Dino 206 GT which had just been released in similar configuration. The Hurricane also had a rear-view camera, an early version of satellite navigation and a host of other safety, comfort and performance features that would not become standard on other Holden vehicles for many decades. There’s little outwardly visible that hints at the historic value of this boxy bright red sedan, but the C36 is notable as the commercial starting point for the Mercedes Benz AMG performance sub-brand that has gone on to produce some of the world’s most accomplished sports cars. The 1995 model used a 3.6-litre inline six to push out a sprightly 206kW, and was worth $155,000 when new. Believed to be the oldest Aston Martin production car in Australia, this gleaming 1923 racer is also regarded as the oldest surviving two-seater production race car. It was shipped to Australia in 1924 – believed to be one of only three to come here – and has remained ever since, still regularly competing in regularity and hill climb events. This Speedster, built by Holden Bodyworks, was believed to be one of the world’s fastest cars in its day. Shipped to England, it hit 138 miles per hour on the Brooklands track, about 20mph faster than anything else could manage at the time. Returned to Australia, its speed was put to a different use as it became a ‘moonlight speedster’, running moonshine across the Victoria-NSW border at night to avoid detection by authorities. The car was seized by police in 1964 and crushed, but has since been restored.