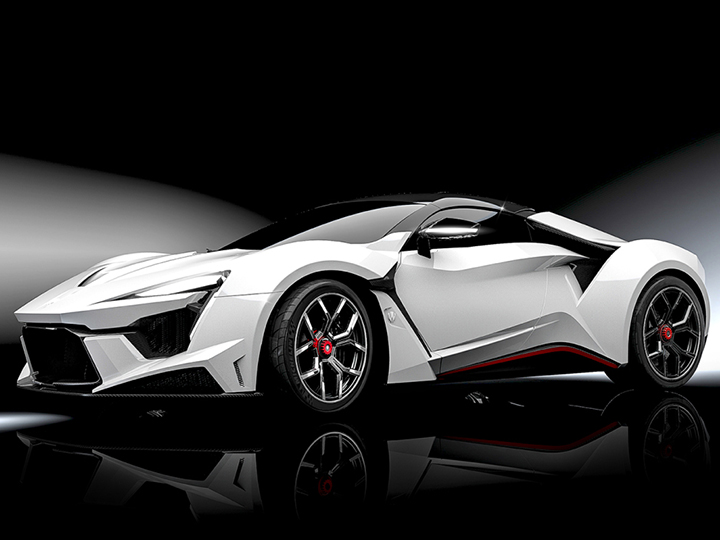 Six stunning supercars that fly under the radar

A growing number of boutique builders are accelerating out of the shadows and presenting boundary-breaking design, engineering, and performance.

Marques such as McLaren, Lamborghini, and Bugatti are synonymous with supercars, and rightly so. These icons of innovation repeatedly set new benchmarks in all areas of the industry, and continue to fine-tune the template of exclusivity for others to follow — and follow they are.

A growing number of boutique builders are accelerating out of the shadows and creating their own automotive machinations — each presenting boundary-breaking design, engineering, and performance. The examples here, rolling in the seven-figure price range, may lack name recognition, but they will certainly give their market segment some souped-up competition. Named for the mythological Greek god of the north wind, the Boreas — from Spain’s DSD Design & Motorsport — is two-door tempest touting a mostly carbon-fibre monocoque construction and a proprietary hybrid power train that generates more than 745 kW. The latter, which also includes a 7-speed automated manual transmission, allows the brute to blow from zero to 100 km/h in 2.8 seconds and reach a top speed of 380 km/h.

“The Boreas project arose from the ambition to strive for technical and aesthetic innovation,” says DSD founder David Sancho Domingo. “We were also focused on the search for ergonomics within the varying physical and psychological scales that would be experienced.”

Prior to beginning Boreas, Domingo educated himself on the intricacies of supercar construction by journeying throughout Europe and the United States to personally meet with marques that specialise in high-performance vehicles — such as Pagani and Shelby, among others — and tour their facilities. The fact-finding foray helped him decipher the direction he and his team would take in the hope of making an indelible impression on the industry.

After 10 years in development, a standing model of Domingo’s own automotive dynamo was introduced at France’s 24 Hours of Le Mans endurance race last June, followed by a completed prototype shortly thereafter. And while the Boreas is a one-off, 12 individually designed successors are planned for production in January. ‘It wasn’t an architect or a designer that invented objects, but an artisan.”

Although founder Giorgetto Giugiaro — named Car Designer of the Century in 1999 — is no longer with the firm, Italdesign has not only kept its purpose-driven passion, but increased the intensity. Acclaimed for the automotive artistry it has produced for others in the industry, the Torino-based team has finally stepped in front of the creative curtain to reveal its own masterwork — the ZeroUno supercar.

“The only way to design a successful sports car is to use the form-follows-function approach,” says Filippo Perini, head of design for Italdesign and the man responsible for the look of the Lamborghini Aventador. “For the ZeroUno project, we communicated a design language that fits with our company’s DNA, and we employed a simultaneous engineering process.”

Badged under the nearly 50-year-old firm’s new brand, Italdesign Automobili Speciali, the arrow-like automobile was presented in full force to the United States market at the 2017 Pebble Beach Concours d’Elegance on August 20. It was soon clear from its premiere that the car would be a crowd-pleaser in California.

And it’s no surprise, as the four-wheel-drive coupe’s appearance is as compelling as its performance. Built from a chassis constructed of carbon fibre and aluminum, and covered in a completely carbon-fibre body, the car carries a 455 kW, 5.2-litre naturally aspirated V10 engine (with 560 Nm) mated with a paddle-shift-activated dual-clutch 7-speed gearbox.

The power train enables the ZeroUno to zip from stationary to 100 km/h in 3.2 seconds and zoom up to 330 km/h. The car’s efficiency in motion is enhanced by an air-slicing aesthetic. “The ZeroUno has more in common with Italian GTs of the 1960’s,” explains Perini. “It’s a mix of soft, clean surfaces for the main body and extremely functional aerodynamic elements.”

The ZeroUno rolls with a starting price of US$1.7 ($A2.1) million. And seeing how well it fits in with the Golden State’s penchant for power and panache, one can only wonder if a sibling convertible is inevitable. Based in the United Arab Emirates, W Motors introduced the Fenyr SuperSport to the world in 2015 at the Dubai International Motors Show. Named after a mythological wolf, the carbon-fibre ferocity, with a tubular aluminum chassis, has fangs in the form of a 4-litre twin-turbo flat-6 engine (built by Germany’s RUF Automobile) that nets 670 kW and 1,200 Nm. And with a 7-speed, double-clutch gearbox as part of the power train, the car clocks zero to 100 km/h in 2.7 seconds and can cruise at up to 400 km/h. With only 25 examples planned per year, each one will be priced at approximately US$1.85 ($A2.36) million. Another leader of the supercar pack is the Lykan HyperSport, also by W Motors. Debuted at the Qatar Motor Show in 2013, the ground-breaking coupe features diamond-encrusted headlights, reverse-dihedral doors, holographic instrumentation, and gold-stitched seats. Referencing the Greek word for “werewolf,” the Lykan lunges from zero to 100 km/h in 2.8 seconds and can give chase at up to 386 km/h thanks to its 580 kW, 3.7-litre flat-6 engine (producing 960 Nm). These performance characteristics, along with a distinct body design and a price tag of US$3.4 ($A4.3) million, earned it a starring role in the 2015 film Furious 7. Coincidentally, only seven bespoke examples are planned for production. With a pedigree that comprises three pillars of the motorsports industry, the Fittipaldi EF7 Vision Gran Turismo by Pininfarina can’t help but be a top contender on the track. Presented at the 2017 Qatar Motor Show (April 18 through 22), the car is the collaborative creation of Brazil’s famed wheelman Emerson Fittipaldi, Italy’s premier coachbuilder Pininfarina, and Germany’s elite engineering team at HWA AG — a winning recipe for racing.

The composite coupe relies on carbon-fibre monocoque construction and carries a naturally aspirated V8 engine mated with an integrated gearbox. The power train, suspension, and braking system have been developed by HWA AG but are housed in a body that is distinctly Pininfarina in design. With its shark-like aesthetic, the automobile presents the same visual cues as its aquatic counterpart — an intimidating form that is strikingly streamline. But that is to be expected since the car’s eponymous racer was an apex predator in competition.

Fittipaldi was a dominant force during the decade of his Formula 1 career and won his first F1 Drivers’ Championship in 1972 at the age of 25, the youngest, at the time, to do so. And he is also the only driver to win the Indianapolis 500 and F1 Championship on multiple occasions, reason enough for his induction into the Motorsports Hall of Fame of America in 2001.

Upon purchase of a limited-edition example, aspiring racers will also be buying themselves a personal coaching session with the legend and eligibility for membership in the Fittipaldi Racing Club, host of global driving events. But those who steer toward more vicarious forms of vehicular contest will soon have their chance behind the wheel as well. A virtual version of the car will star in the latest release of Polyphony Digital’s popular Gran Tursimo game series and its interactive FIA Gran Turismo Championships. Introduced at the Geneva International Motor Show in 2016 as a US$2.5 ($A3.1) million variant to Pagani’s original Huarya coupe, the BC (named in honour of Horacio Pagani’s close friend Benny Caiola) features the Italian marque’s carbon-titanium monocoque construction for the chassis and an enhanced 560 kW, twin-turbo Mercedes-Benz AMG V12 engine that turns out more than 560 kW and is exclusive to Pagani. Mated to that muscle is a bespoke 7-speed automated manual transmission (AMT) that features Xtrac’s new electro-hydraulic actuation for faster and more precise shifting. Other innovations on board include Bosch’s antilock braking system, traction control, and electronic stability program.